On the east coast of the island of Rhodes, about 56 Km. from the town of Rhodes, the popular tourist attraction, Lindos, is magnificently situated between two bays, with its low whitewashed houses overlooked by a medieval castle and an ancient acropolis. 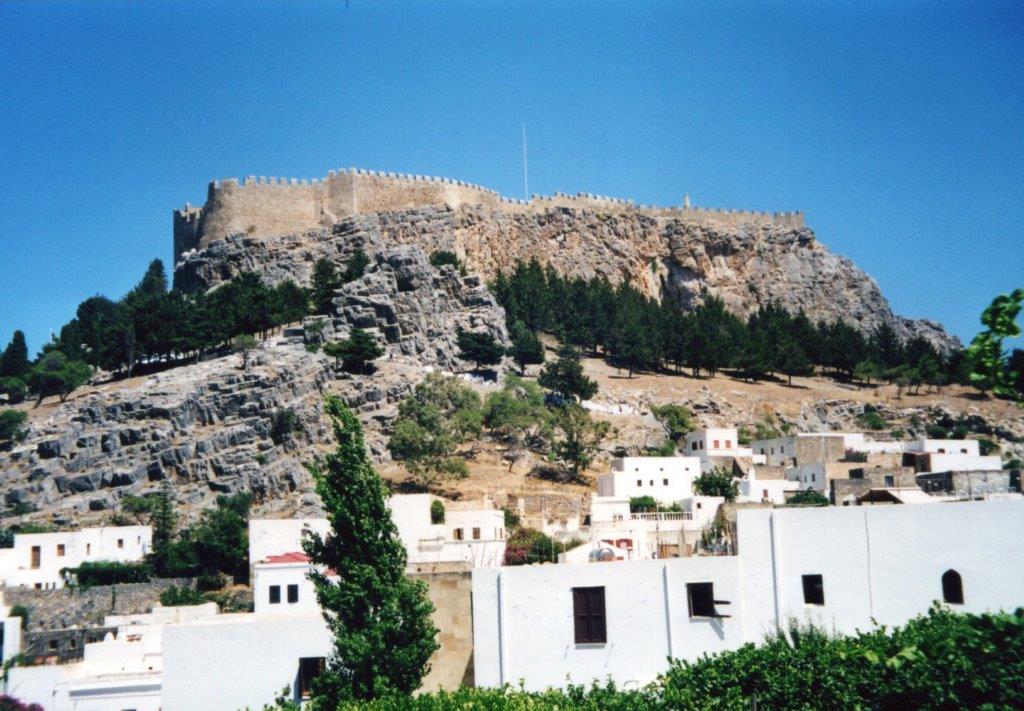 Distant view of the acropolis of Lindos with white houses in foreground.

Remains from the Neolithic period confirm that the site, on the island’s only natural harbor, was occupied from the 3rd millennium BCE.  Developed by the Dorians, Lindos became the most powerful town on Rhodes by the 12th Century BCE, due to its naval power.  Its two harbors and its impregnable acropolis were unique.  The town reached the height of its power in the 6th Century BCE.  The Temple of Athena Lindia was built in 550 BCE.  An aqueduct, whose water still flows from a spigot surviving in the village square, was built at that time.  When the town of Rhodes was built in 408 BCE some residents moved to the new town but Lindos remained the centre of maritime trade.

Cars are not allowed in the town so a visitor must explore on foot. For those finding the walk up to the acropolis daunting donkeys are available. 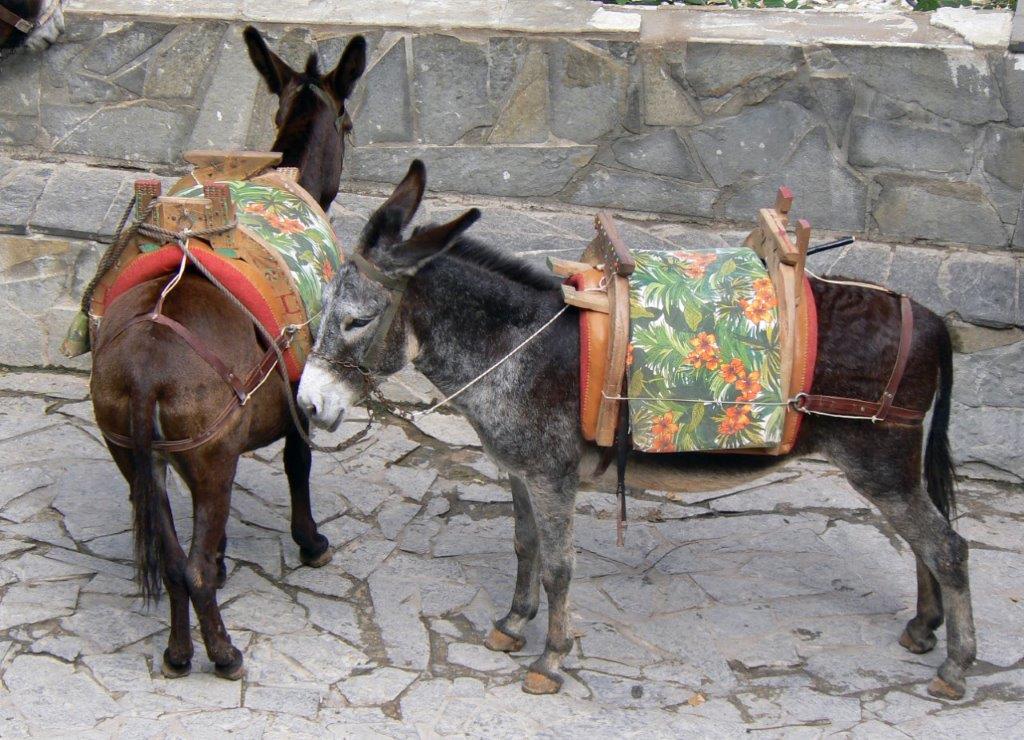 Donkeys available to take tourists up to the acropolis.

Acropolis Street, lined by cafes, souvenir shops and travel agencies, leads into the town.  Houses in picturesque little lanes date from the 16th, 17th and 18th Centuries.  Their traditional architecture and decoration is unique and generally not found in other areas of Greece. Mosaics, characteristically, are made with black and white pebbles in unusual patterns. 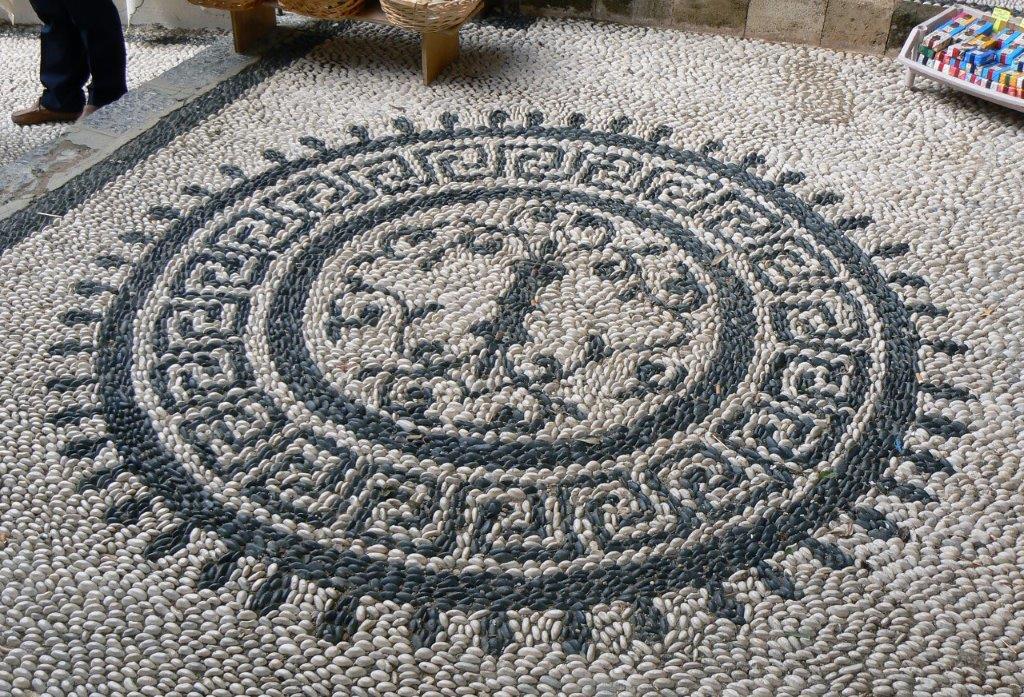 An example of a pebble mosaic.

Lindos has good bathing beaches with beautiful Pallas Bay below the town.  On the walk up the hill to the acropolis there are fine views of the harbor and surrounding waterways.  From the entrance to the acropolis a stepped path leads to a small square with a Byzantine tower on the south side. 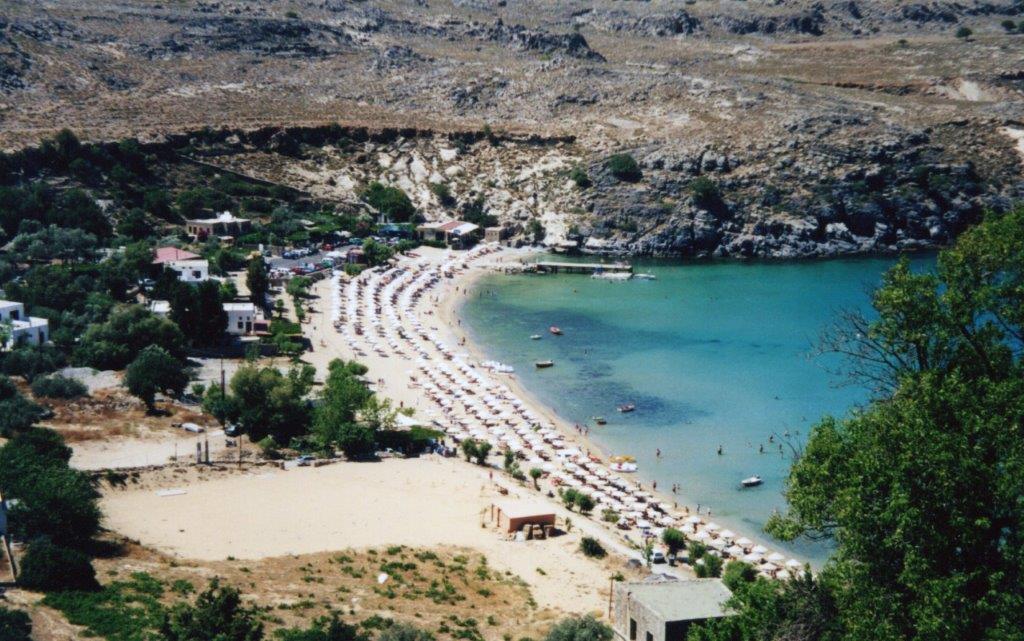 The beach at Pallas Bay. 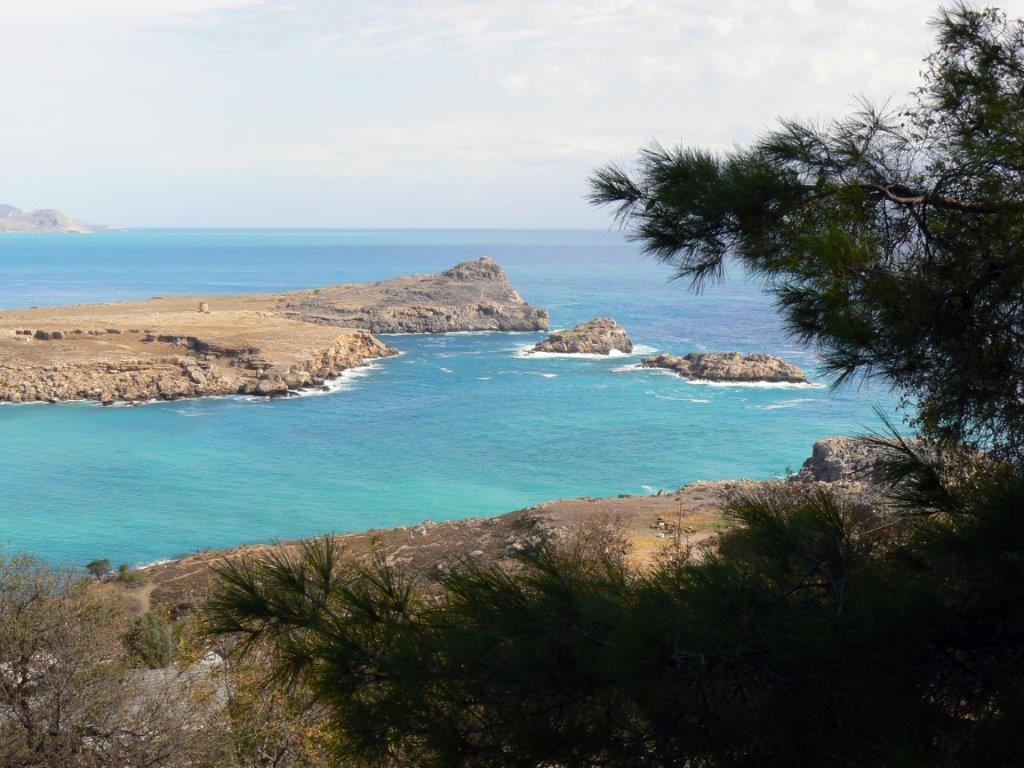 A view from the path up to the acropolis. 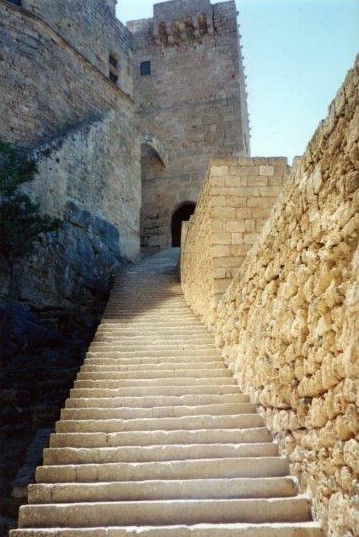 Steps up to the Byzantine tower. 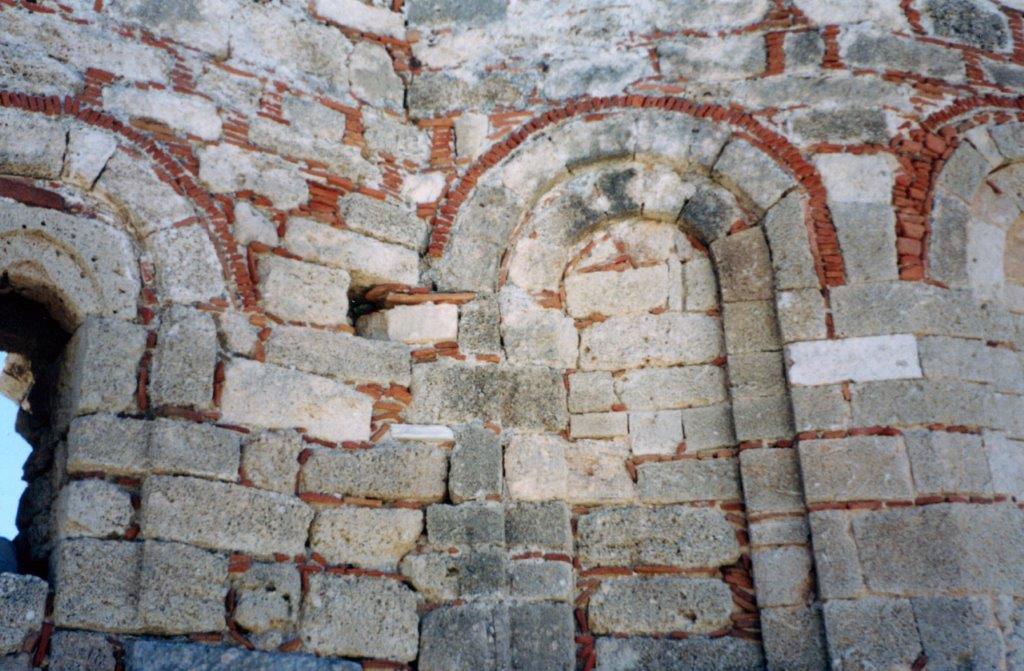 Inside the Byzantine tower. 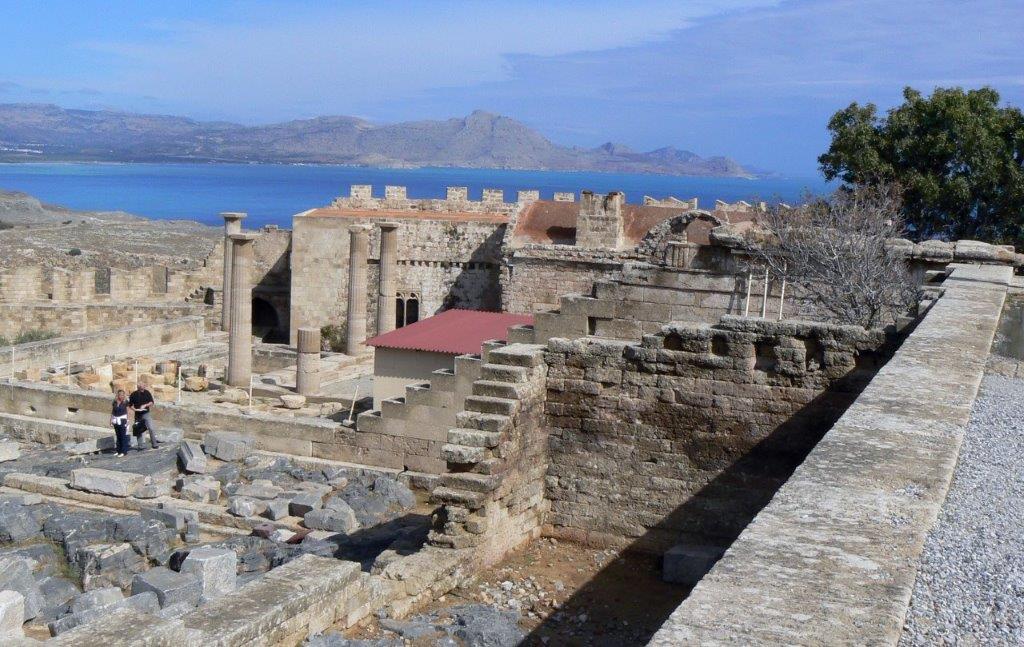 The top of the acropolis. 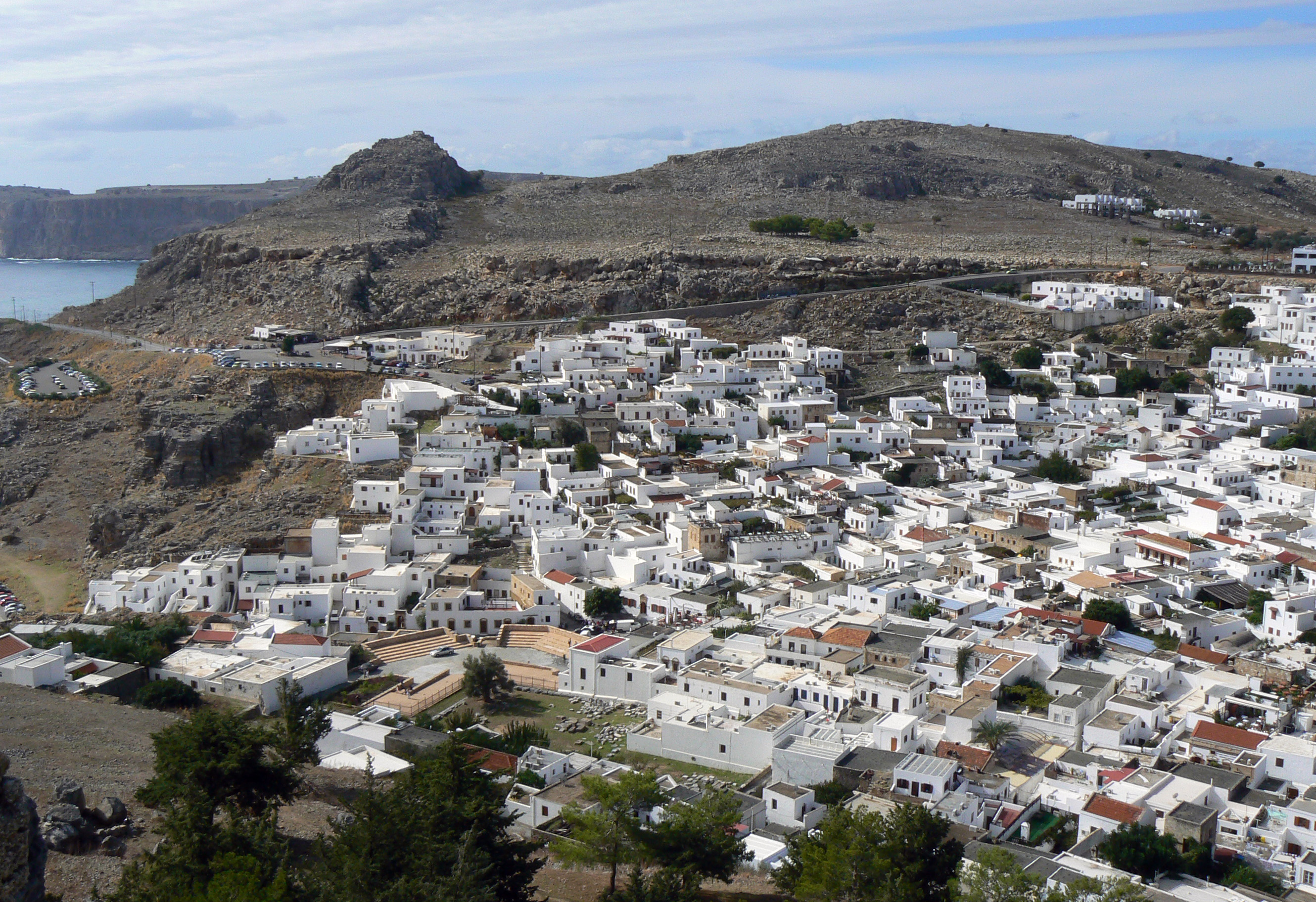 View of houses in the town from the top of the acropolis.

Nearby, on a sheer rock face, is a carving of a ship, commemorating a victory by Admiral Hegesandros of Miklon in the 2nd Century BCE. 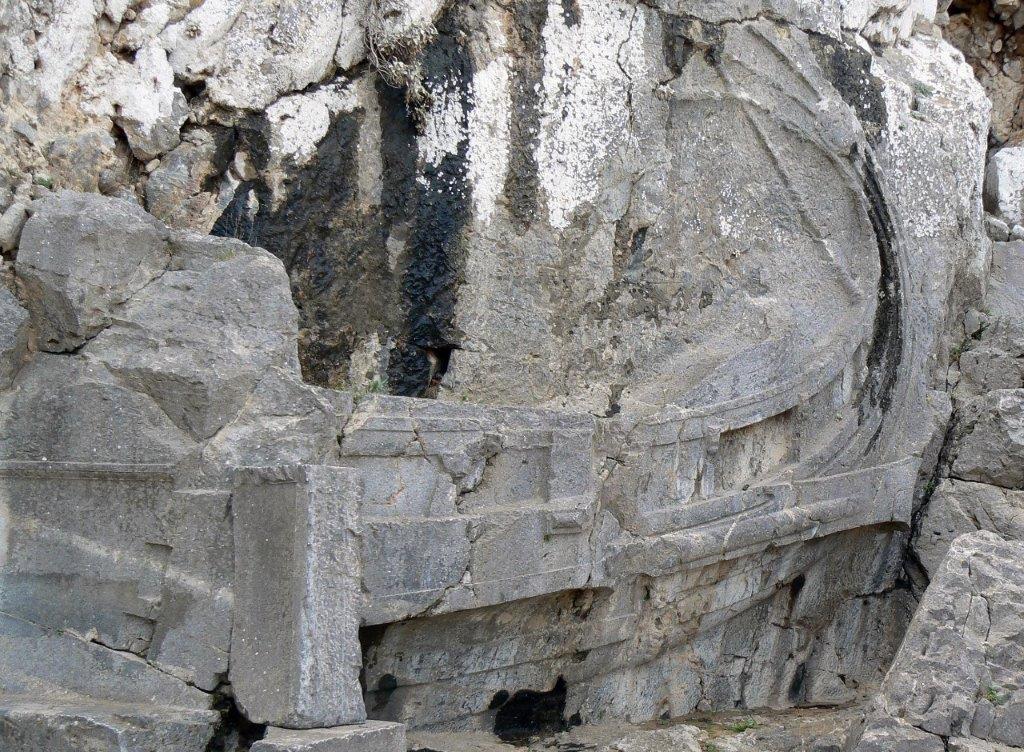 Prow of the trireme of Hegesandros carved into the rock face.

A monumental staircase 21 m. wide leads up to Propylaea of the early 3rd c BCE behind which is a courtyard surrounded by columns (not in good order) at the back of which is a comparatively modest but artistically impressive temple of Athena Lindia. The temple is only 22 meters long and 8 metres wide – but merges well into the natural environment and the arrangement of buildings on the acropolis. 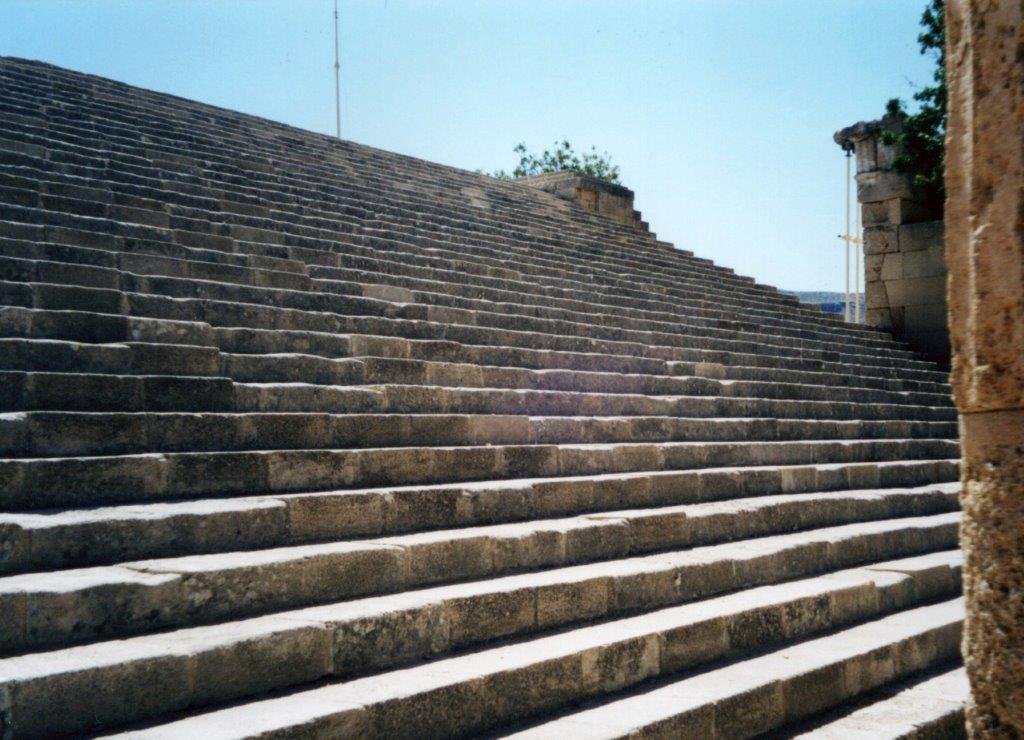 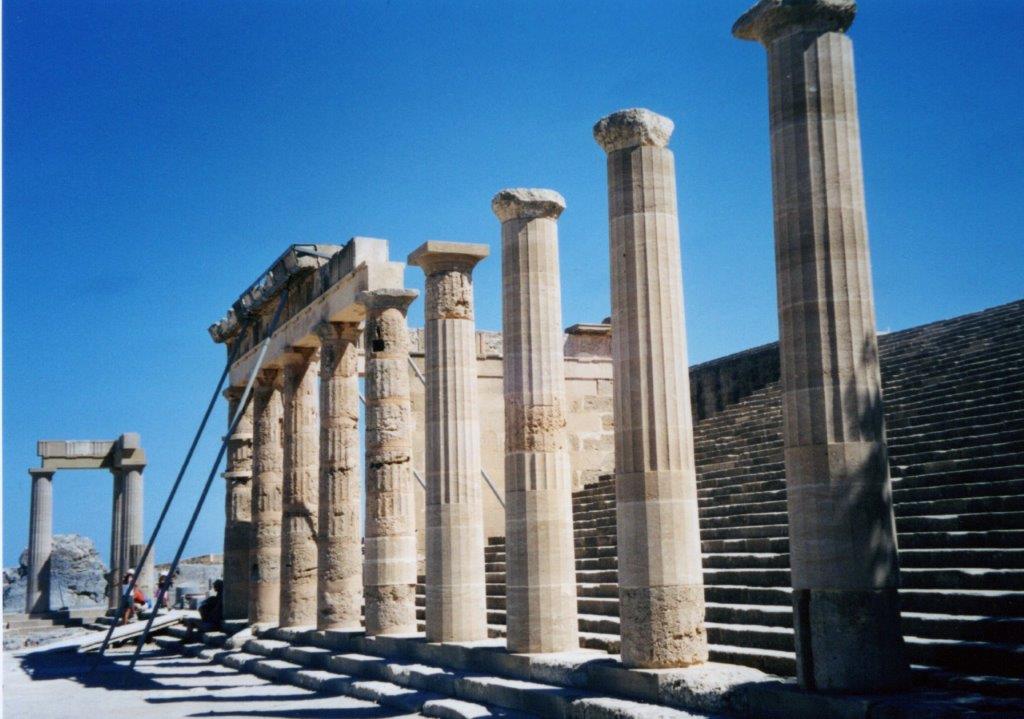 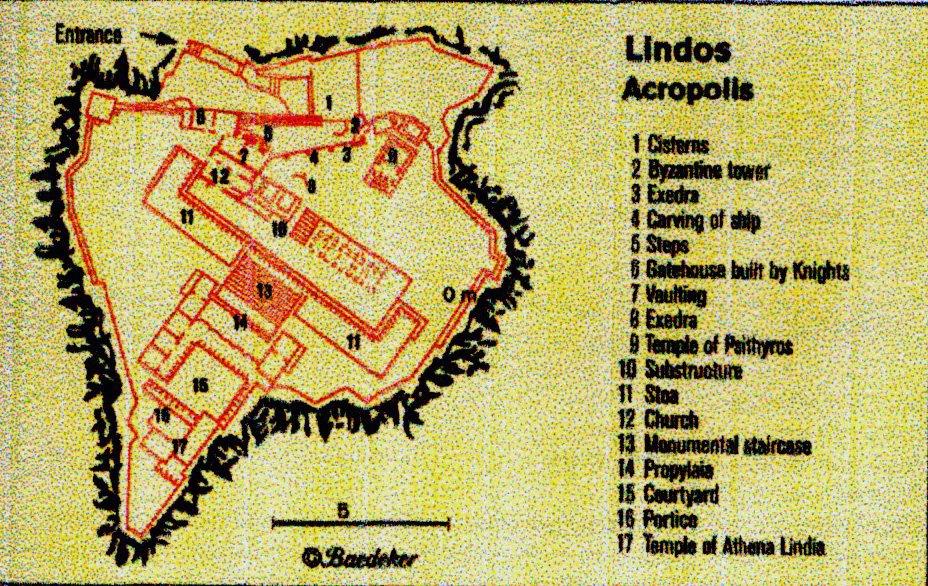 Plan of the acropolis area.

There is a good view of the harbor of Ayios Pavlos (St Pauls Bay) from the top of the acropolis complex.  The Apostle Paul is said to have sought shelter here from a storm during his voyage from Ephesus to Syria in 51 CE. 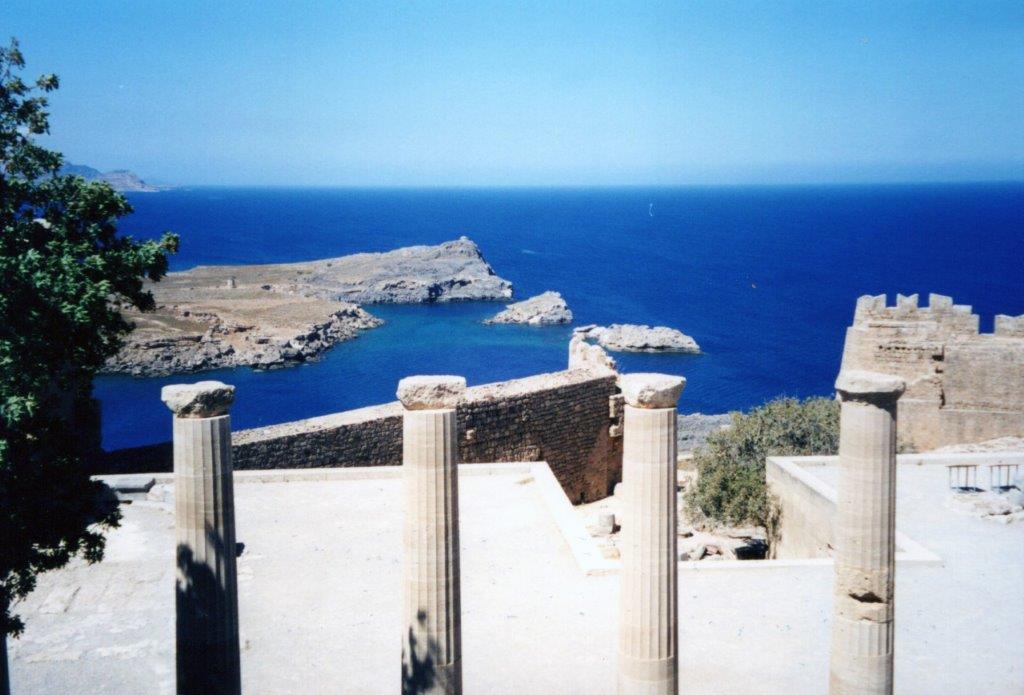 View out to sea from top of monumental steps - over the propylaea. 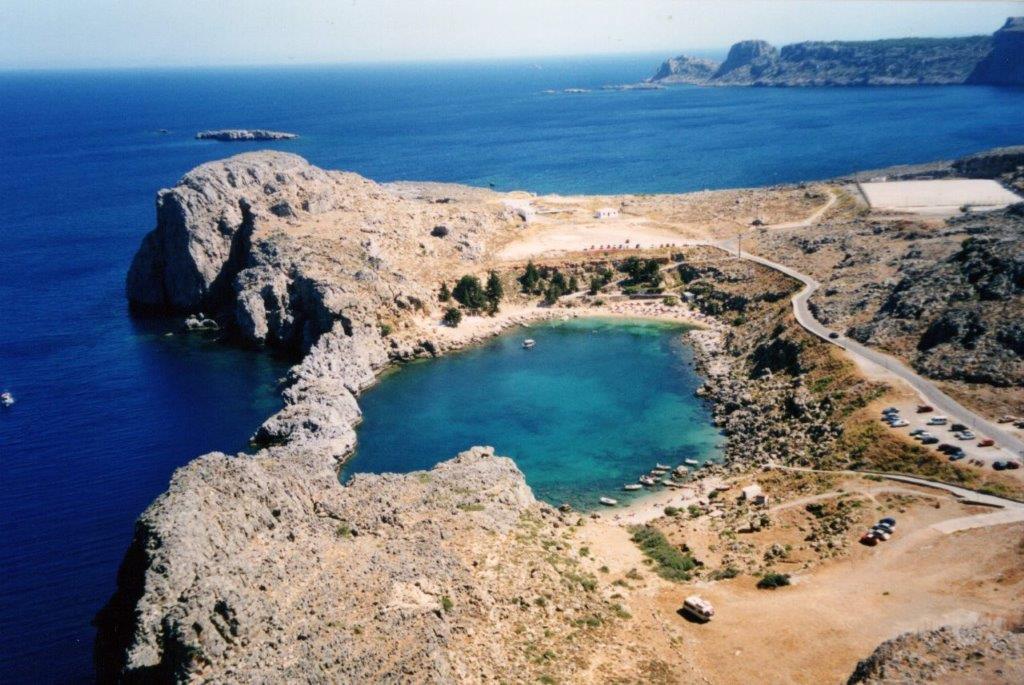 When visiting Rhodes the town of Lindos should not be overlooked. 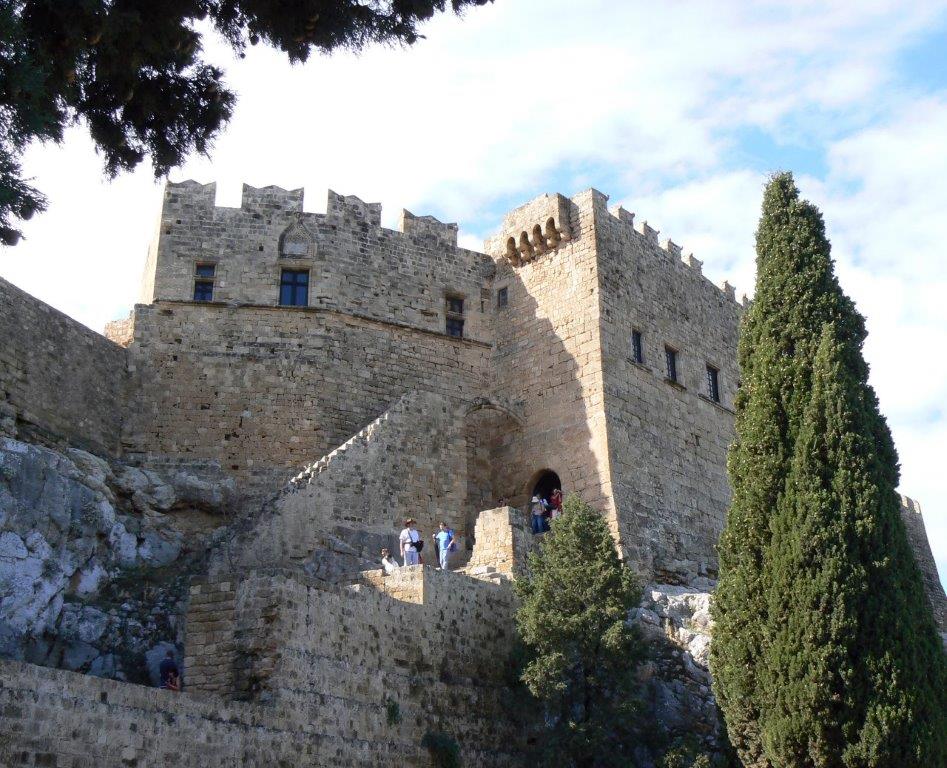