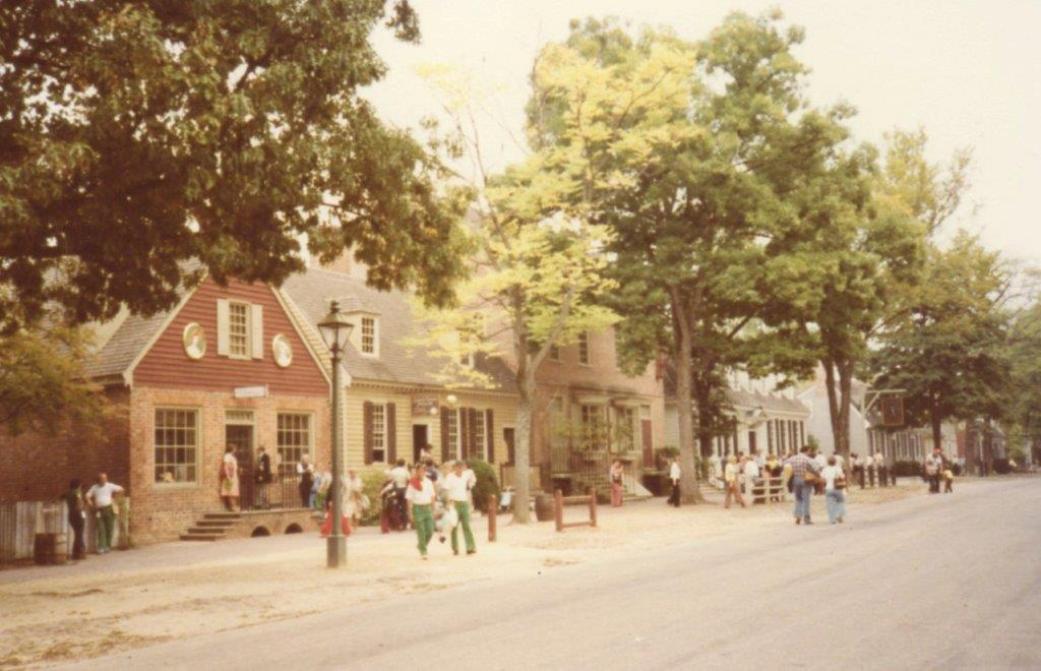 A line of shops on Duke of Gloucester Street

Before the arrival of English colonists at Jamestown in the Colony of Virginia in 1607 the area which later became Williamsburg was largely wooded.
By 1638 it was settled and called Middle Plantation.  After the statehouse of Jamestown, the capital of the Colony of Virginia, burned down on two occasions, the colonial capital was moved to Middle Plantation in 1699 and renamed Williamsburg in honour of King William III of England.  A long term aspiration of the colonists had been the establishment of a school of higher education.  On receipt of a royal charter the desired school was founded in Middle Plantation in 1693, named the College of William and Mary in honour of the monarchs at that time, and was already accepting students when the name Williamsburg was adopted for  the area. The school is the second-oldest institution of higher education in the United States, second only to Harvard University – and the oldest in the American South.
For eighty-one years of the 18th Century Williamsburg was the centre of government, education and culture in the Colony of Virginia.  George Washington, Thomas Jefferson, James Monroe, James Madison and other significant figures in the future United States of America adopted and adapted the preferred features of the forms of British government to the needs of the United States.  During the American Revolutionary War, under the leadership of Governor Thomas Jefferson, in 1780, the government moved to Richmond, approximately 55 miles to the west, which remains the capital of Virginia to this day. 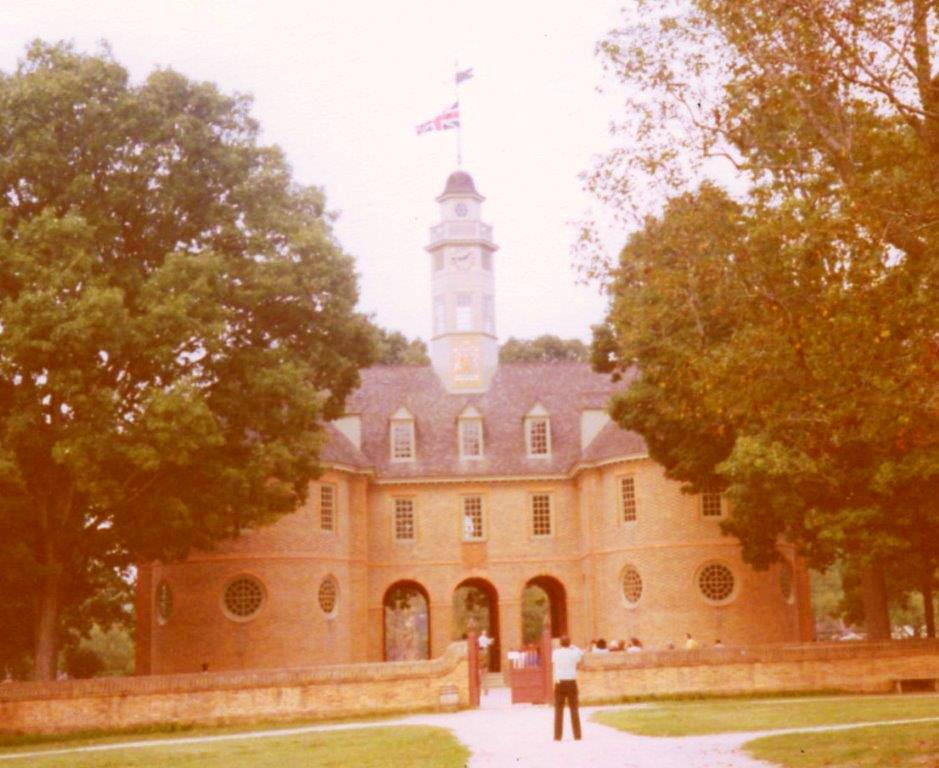 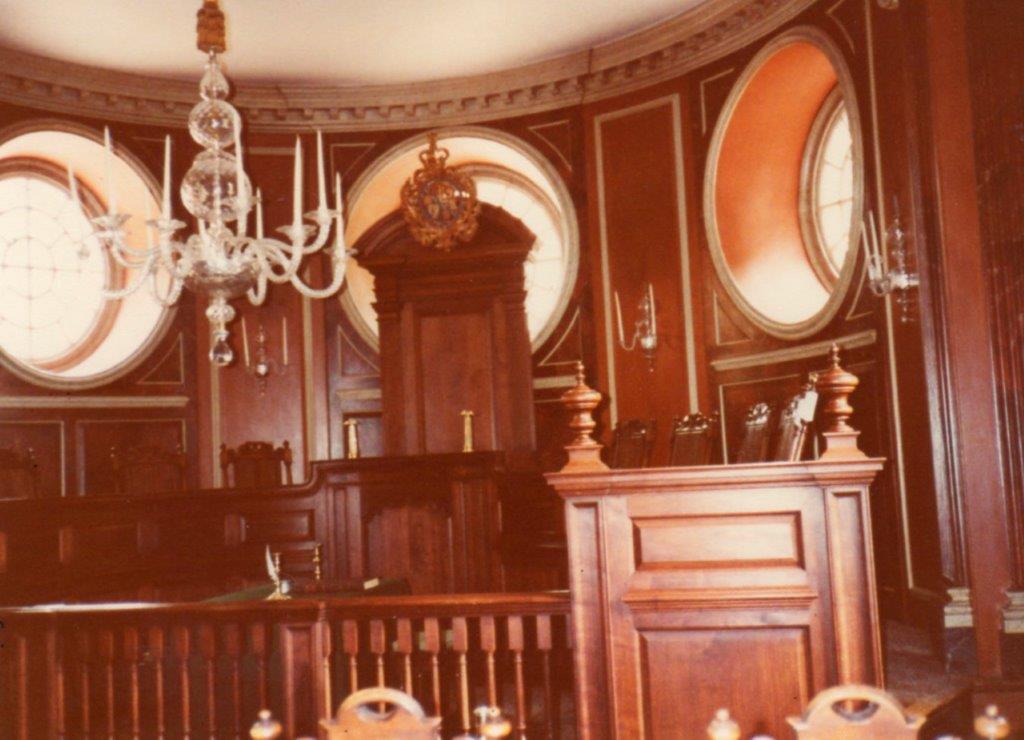 The General Court in the Capitol Building in which the highest judicial tribunal in the colony met twice each year. 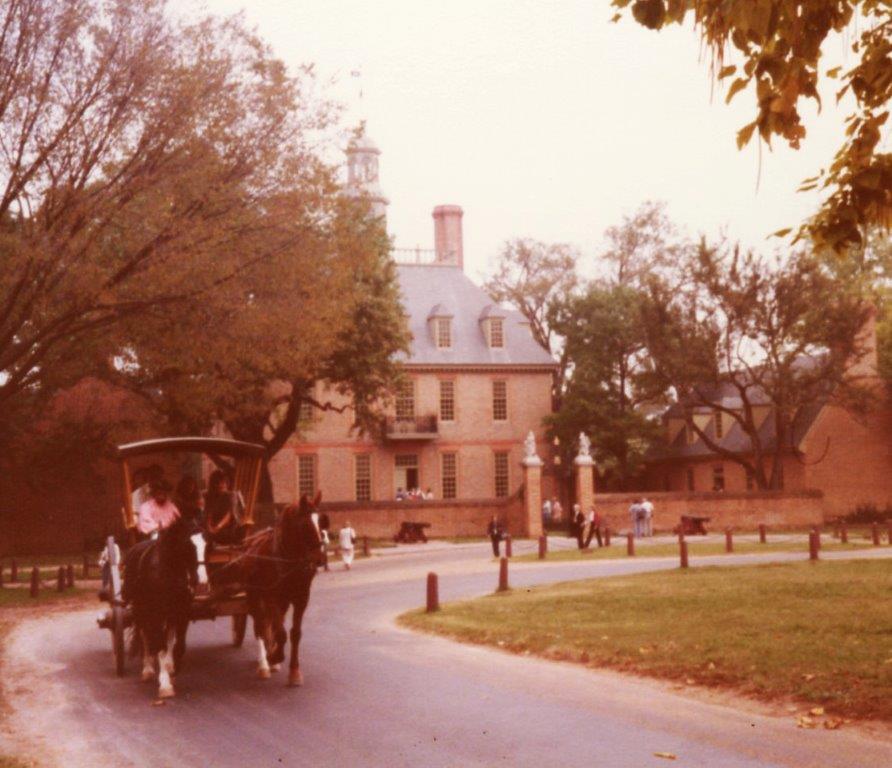 The front of the Governor's Palace with a coach on the road.. 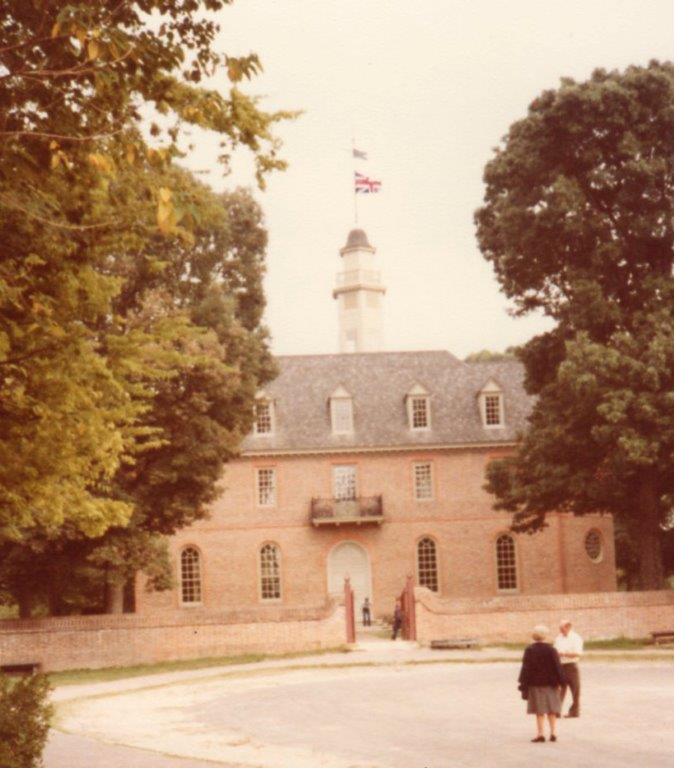 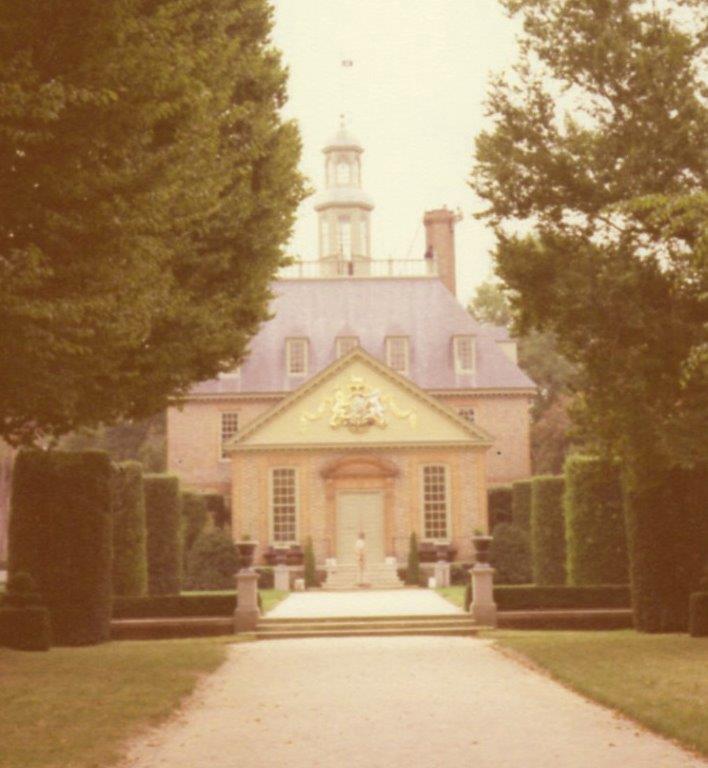 Rear approach to the Governor's Palace through a formal garden. 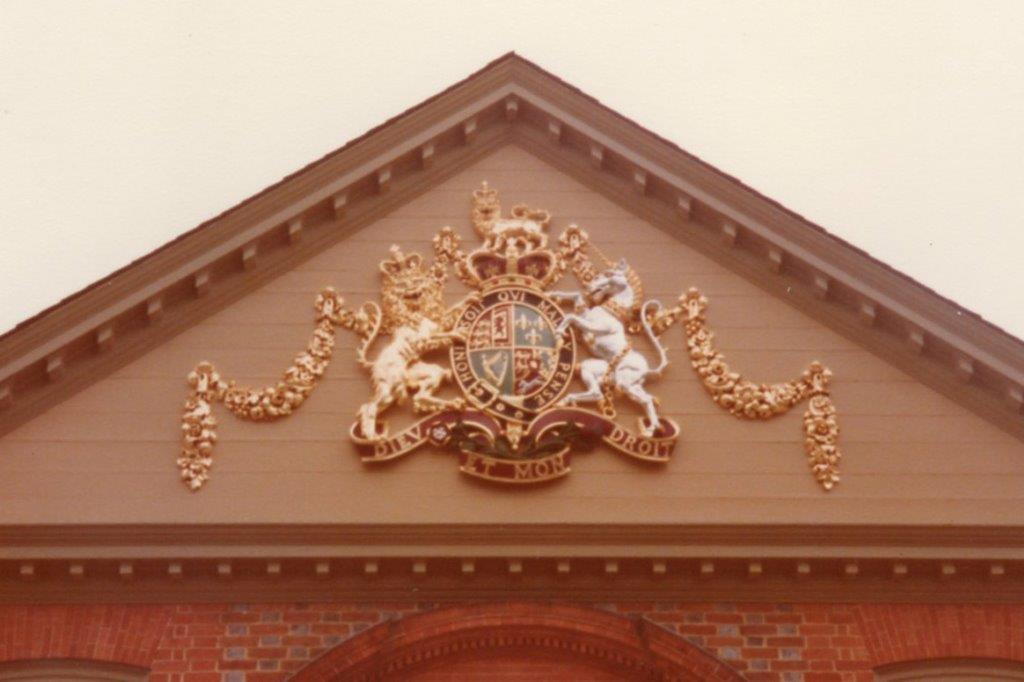 British Coat of Arms over the rear entrance to the Governor's Palace.
With the seat of government gone Williamsburg entered a long, slow period of sleepy stagnation and decay.  It escaped much of the ravages of the Civil War although federal soldiers burned the College. Bypassed by progress the town maintained much of its 18th Century characteristics.
By the early 20th Century many older structures were in poor condition, and were no longer in use or were occupied by squatters.  The Reverend W.A.R. Goodwin who first came to Williamsburg in 1903 as rector of the Bruton Parish Church enlisted the community’s support for the restoration of the 1711 church building.  On his return to Williamsburg, after fifteen years at a church in New York State, he was saddened by the deterioration of colonial-era buildings and stimulated to renew his association with the Association for the Preservation of Virginia Antiquities, believing that Williamsburg was the only colonial capital still capable of restoration.
In 1926, John D Rockefeller Jr. inspired by the foresight and enthusiasm of the Reverend Goodwin became interested in the preservation and restoration of eighteenth-century Williamsburg and thereafter devoted his personal attention and resources to that goal.
Ultimately the Colonial Williamsburg Foundation was established.  In the words of the Board of Trustees the purpose of Colonial Williamsburg is  “to re-create accurately the environment of the men and women of eighteenth-century Williamsburg and to bring about such an understanding of their lives and times that present and future generations may more vividly appreciate the contribution of these early Americans to the ideals and culture of our country.”
In 1980 (when I visited Williamsburg) the Historic Area of Colonial Williamsburg embraced about 175 acres – the heart of the old city. There were eighty-eight original eighteenth-century and early nineteenth-century structures within and near this area. Several main buildings which did not survive the years had been reconstructed on their original foundations after extensive archaeological investigation and historical research. 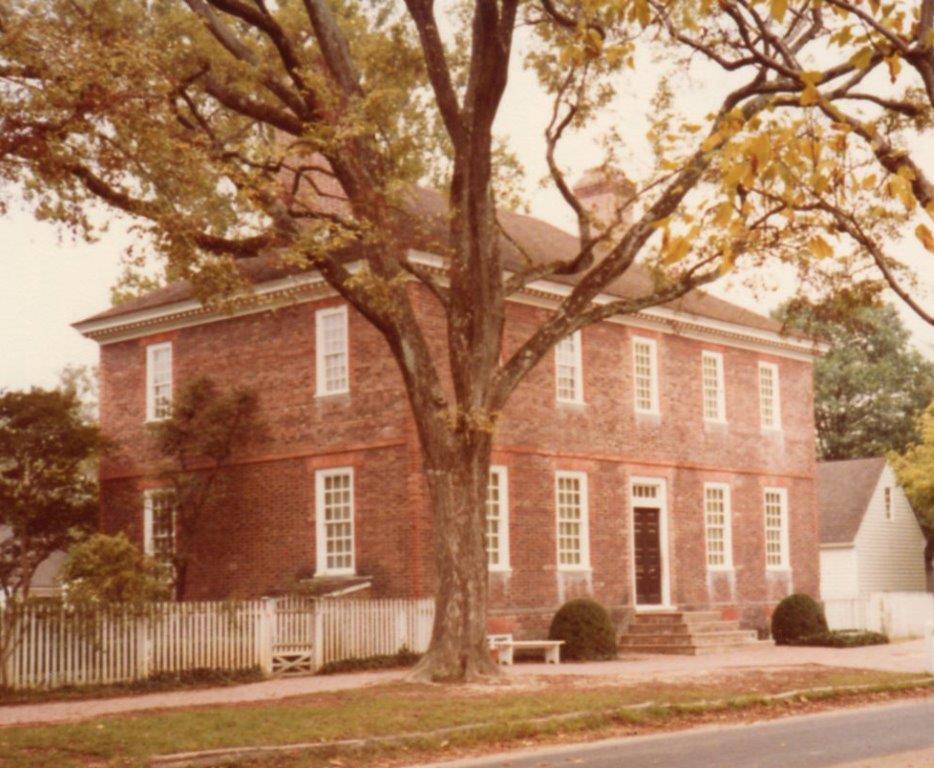 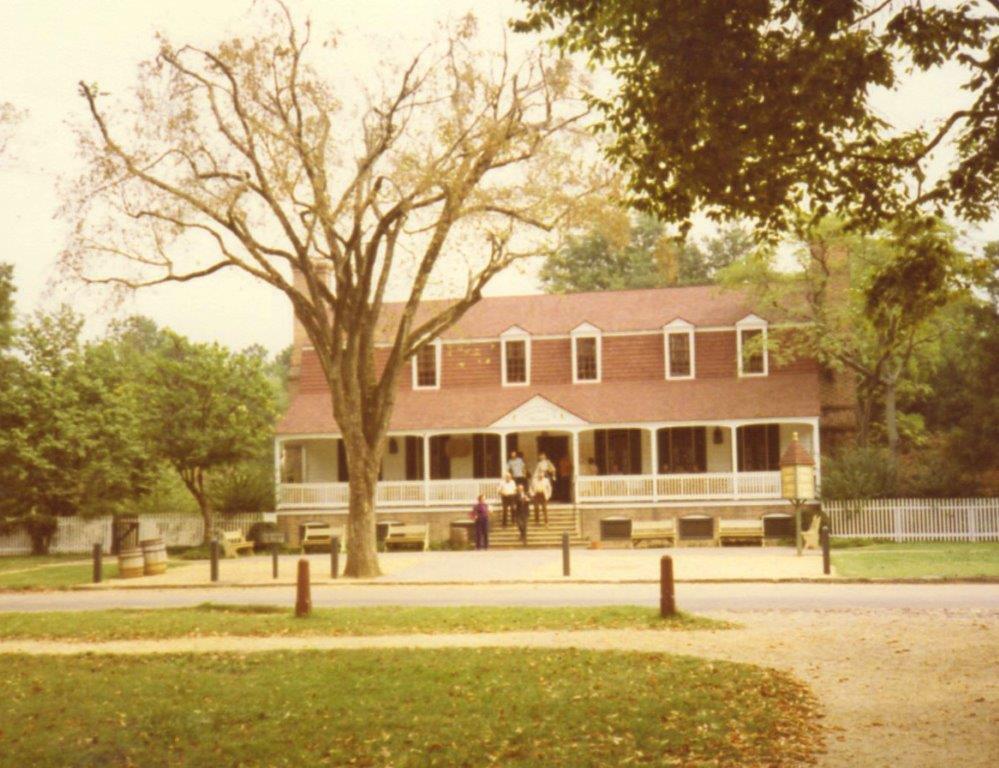 Christiana Campbell’s Tavern (reconstructed)
Four taverns had been reconstructed for use as restaurants. There were craftsmen’s workshops demonstrating trades of the period, including a printing shop, a shoemaker’s, blacksmith’s, a cooperage, a cabinetmaker, a gunsmith, wigmaker, a musical instrument maker and a silversmith. In most of these workshops tradesmen in period costume could be observed at their trades. 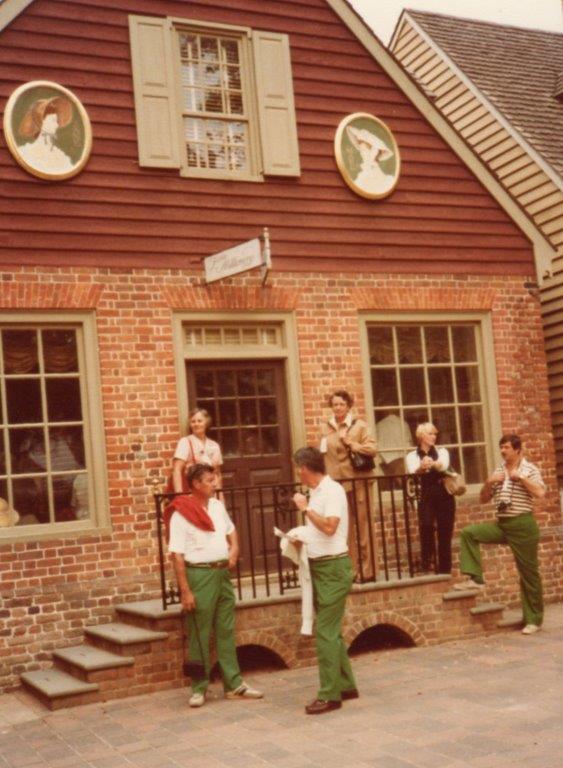 Close-up view of the " Fine Millinery Shop" on Duke of Gloucester Street. 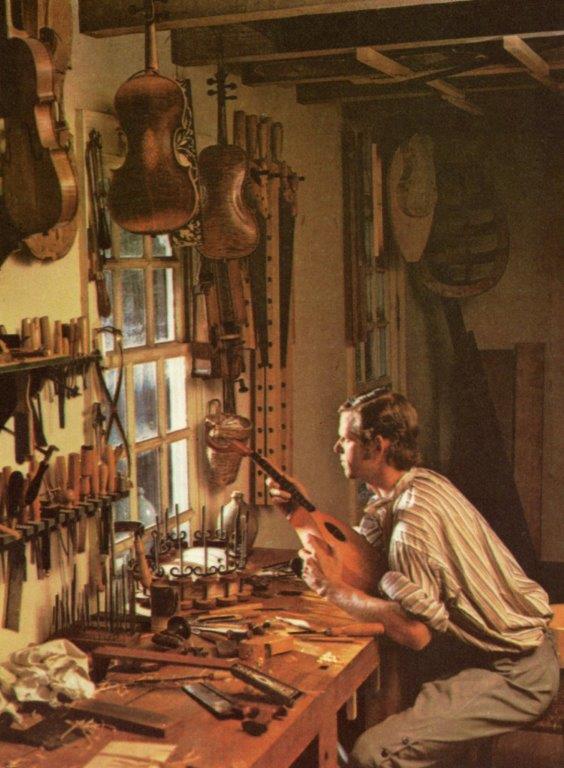 The musical instrument maker in his workshop.
A day spent exploring Colonial Williamsburg is a day well spent.
Photographs by George Repin in 1980.