THE WHITE PASS AND YUKON ROUTE 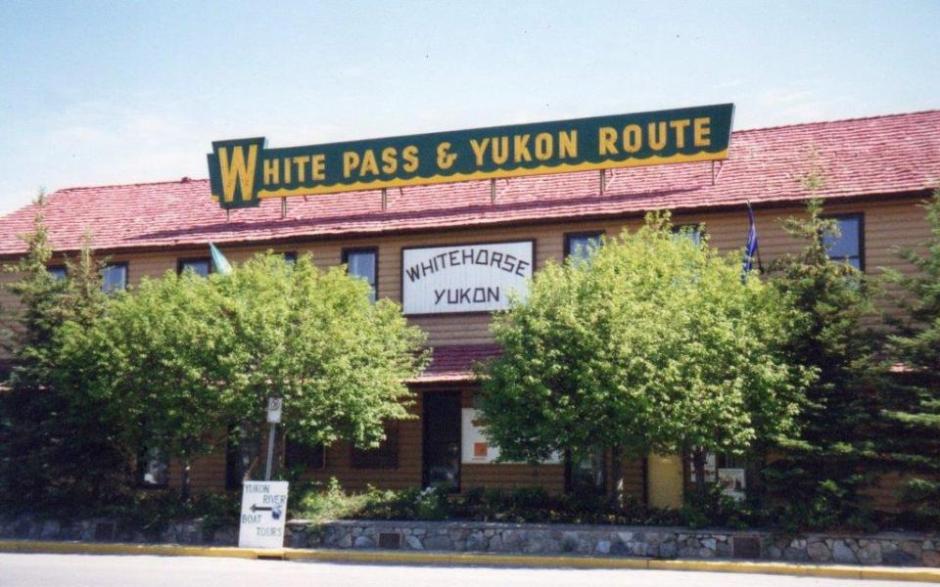 THE WHITE PASS AND YUKON ROUTE

On August 17, 1896 George Carmack and two Indian companions, Shookum Jim and Dawson Charlie, found gold in Bonanza Creek in the Klondike area of the Yukon Territory. Although the few flakes of gold were only just enough to fill the empty cartridge of a Winchester rifle, news of the discovery reaching Seattle and San Francisco, triggered the Klondike Gold Rush.  With the United States in an economic depression tens of thousands headed north hoping to find their fortune, arriving by steamer in Skagway.  Here they were still nearly 600 miles from the area where gold had been found, with a mountain range between them and the inland water ways which they hoped would take them the rest of the way.

Canadian authorities, concerned to ensure that prospectors did not starve to death, stipulated that each should take one ton of food supplies – this being in addition to tools, tents and their other needs.

There were two routes over the mountain – the shorter, steeper Chilkoot Trail – up the Golden Stairs – on which a man might have to make 35 trips up and down to get his gear to the top – and the longer, less steep White Pass Trail on which pack horses could be used. Overburdened horses died on this route in large numbers.  According to Jack London “they died like mosquitoes in the first frost”.

Both routes over the mountain led to the interior lake system 40 miles inland from Skagway.  Here, with 550 miles still ahead of them, the hopeful prospectors cut down trees to build boats and rafts to carry them to the Yukon River and the gold fields.

In early 1898 two men, Sir Thomas Tancred representing a group of British financiers and Michael J. Heney a Canadian Railway contractor met by chance in a hotel bar.  Each man believed that building a railway over the mountain was feasible and, after talking all night, decided to go ahead together.  The White Pass & Yukon Railroad Company was organised in April 1898 and construction began on May 28, 1898. 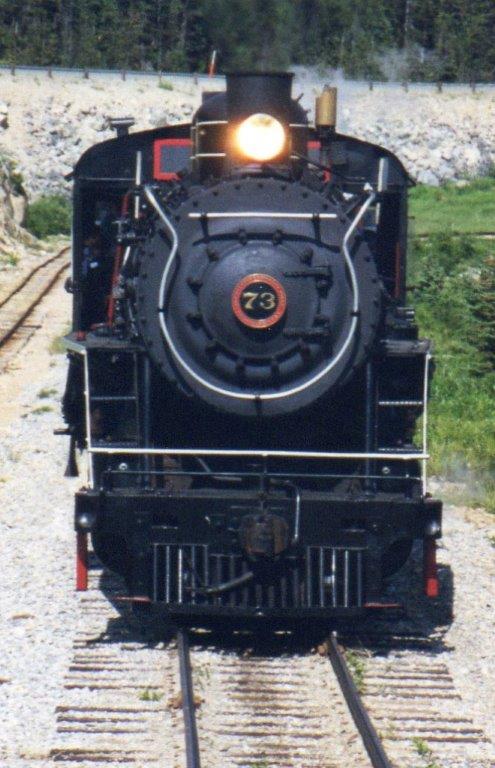 Steam Engine No. 73 - a restored 1947 Baldwin locomotive which escorted trains to the edge of town

It was decided to build a narrow gauge railroad for two reasons:

• The tracks of a narrow gauge railway are three feet apart so they need only a 10 foot wide bed – meaning less rock to blast and                 lower construction costs.

• A narrow gauge track requires a smaller turning radius than the four feet eight and a half inches of standard gauge – making it easier         to negotiate the tight curves anticipated on the White Pass. 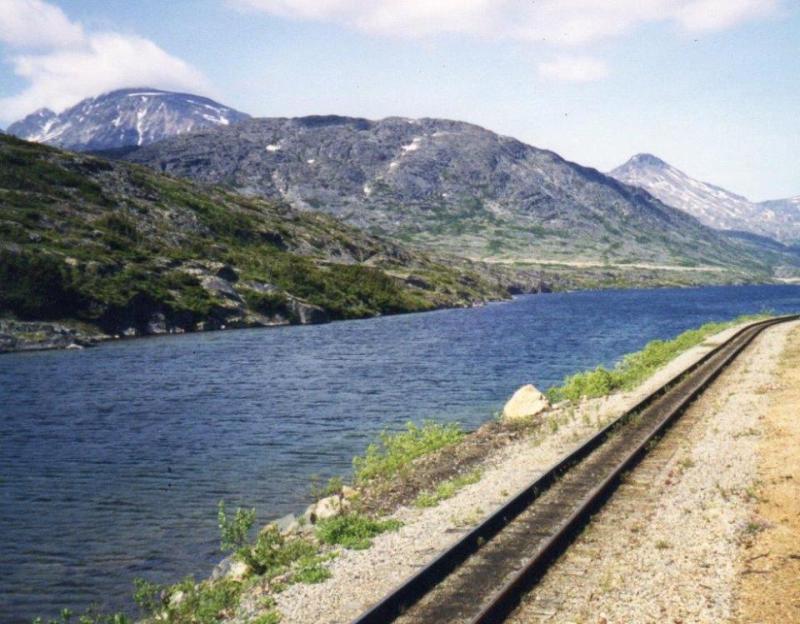 The construction of the railway was a superhuman feat.  The railroad climbed from sea level to 2,865 feet at the summit, with grades of 3.9%. Heavy snow and temperatures as low as 60 degrees below zero hampered the work.

The summit of White Pass was reached on 18 February, 1899.  While the southern gang blasted its way north through the pass a northern crew worked south from Whitehorse.  The two gangs met on 29 July, 1900. 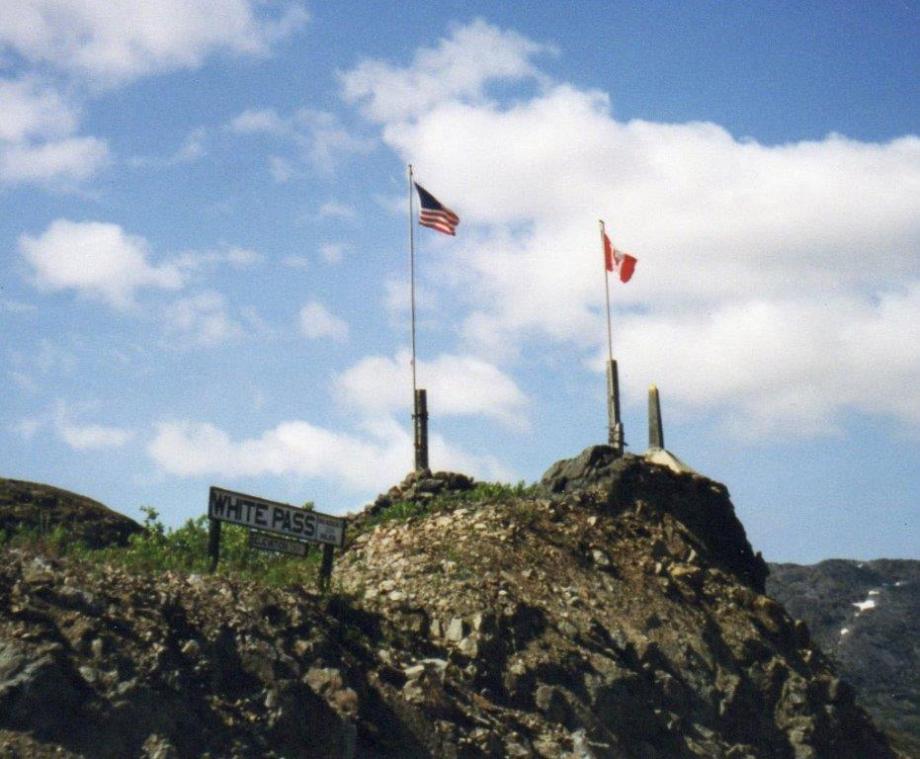 White Pass - at the border of Yukon Territory and Alaska

Over the years the railway carried passengers and freight to the Yukon, supplied materials for the construction of the U.S. Army’s Alaska Highway and was recognised internationally as an excursion train.

When world metal prices fell in 1982 Yukon mines closed.  The railroad became non-viable and stopped running.  However, with a rapid increase in cruise passengers arriving in Skagway the railroad was reopened in 1988 purely as an excursion train to carry tourists.

The photographs accompanying this article were taken during a trip on the train from Whitehorse in the Yukon Territory, Canada to Skagway, Alaska in 1998.

(Footnote:  The film for which Charles Chaplin declared that he most wanted to be remembered was a poignant silent film The Gold Rush made in 1925 and re-released in 1942.) 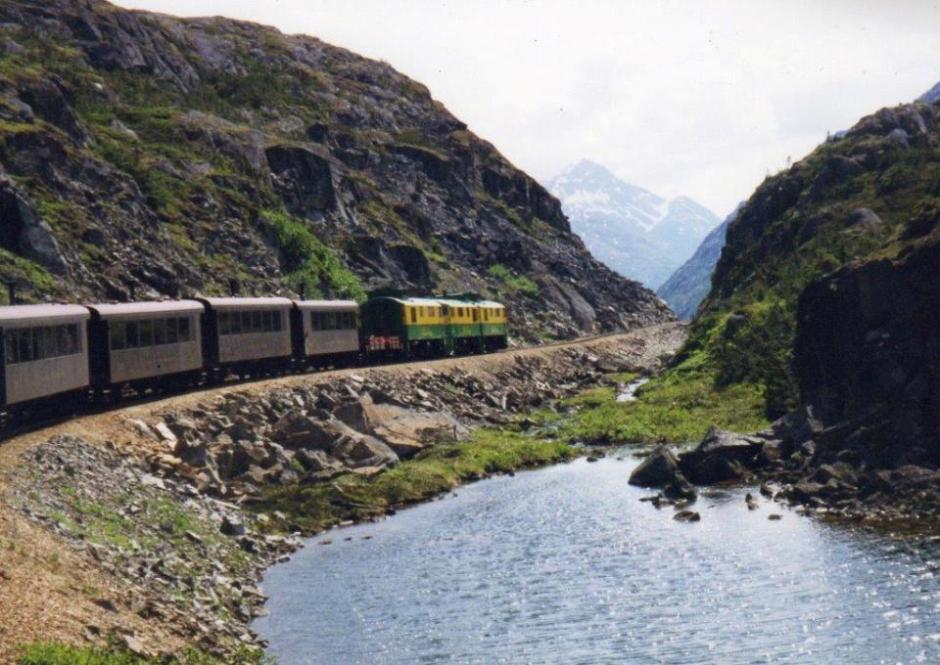 The train skirting a lake. 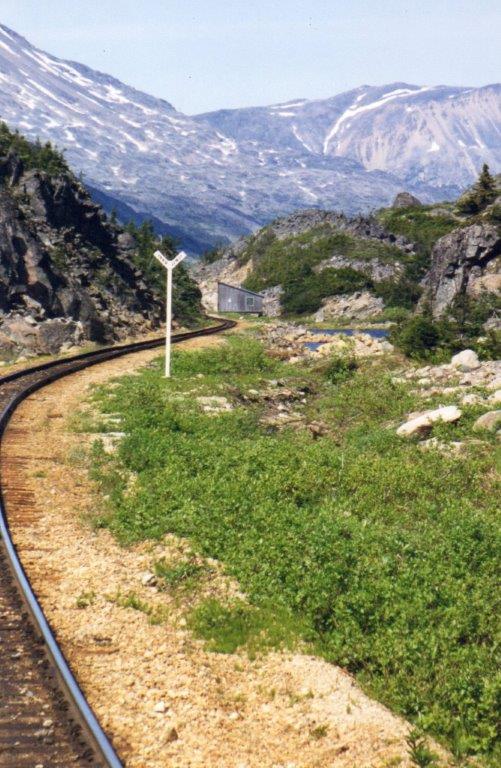 A cabin by the track available for hire from the US Forest Service. 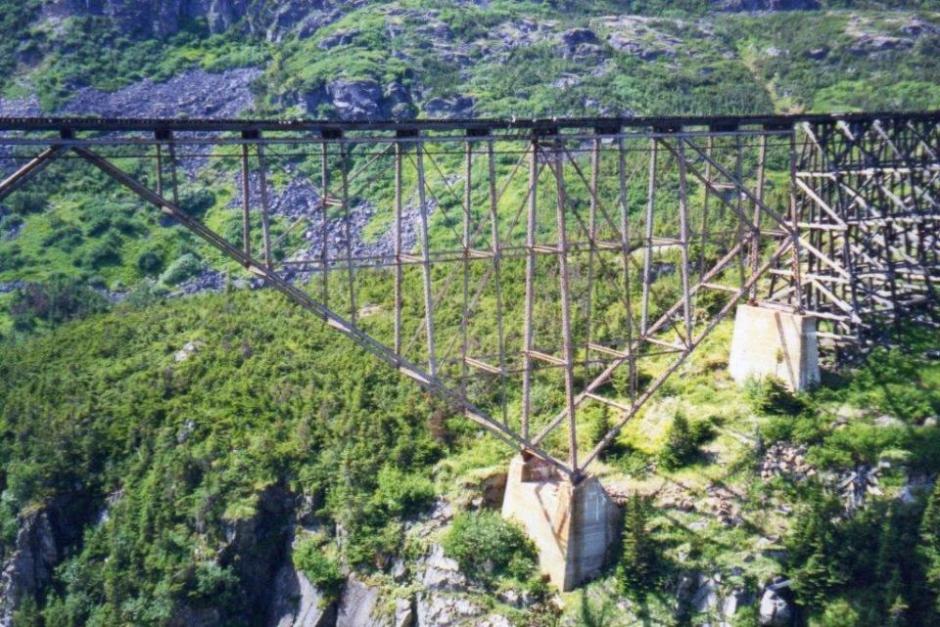 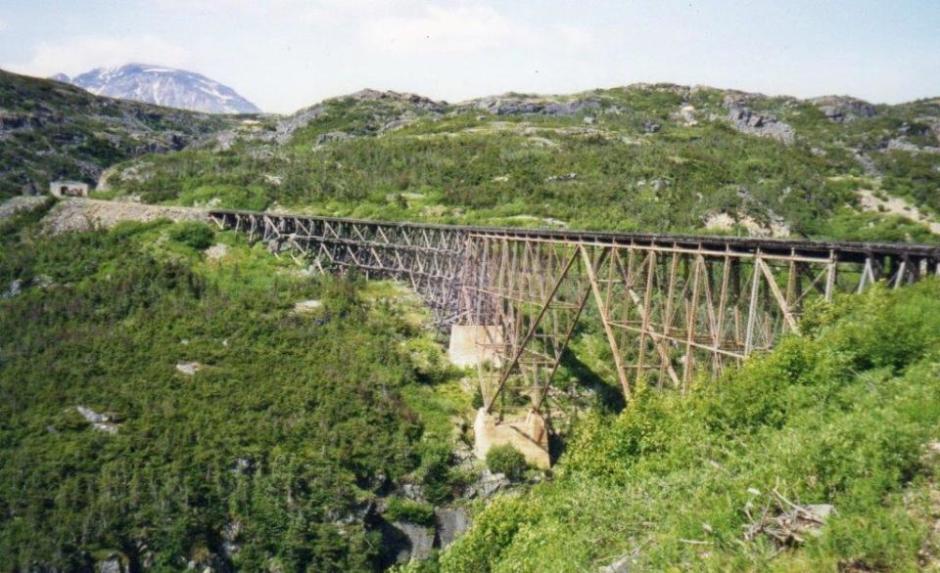 Bridge over Glacier Gorge with line entering the tunnel under Tunnel Mountain. 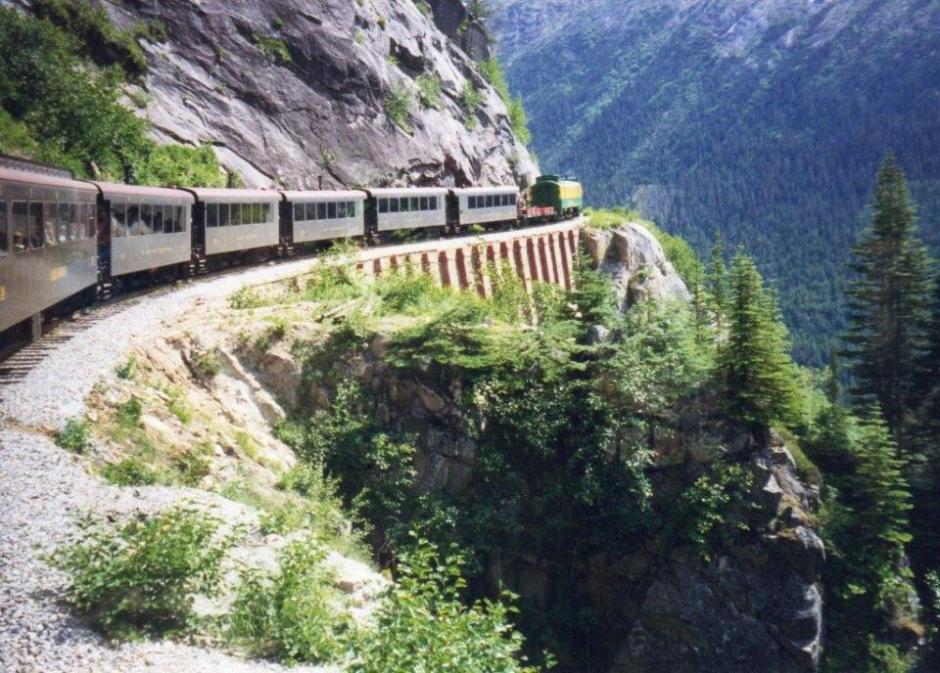 Hugging the mountainside along the face of Slippery Rock.

In the valley approaching Skagway. 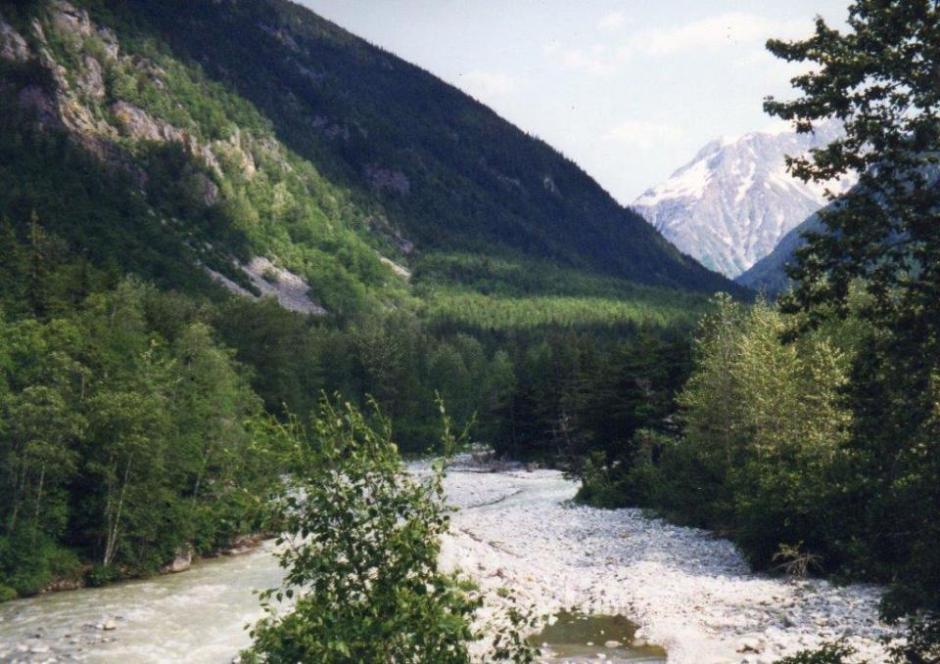 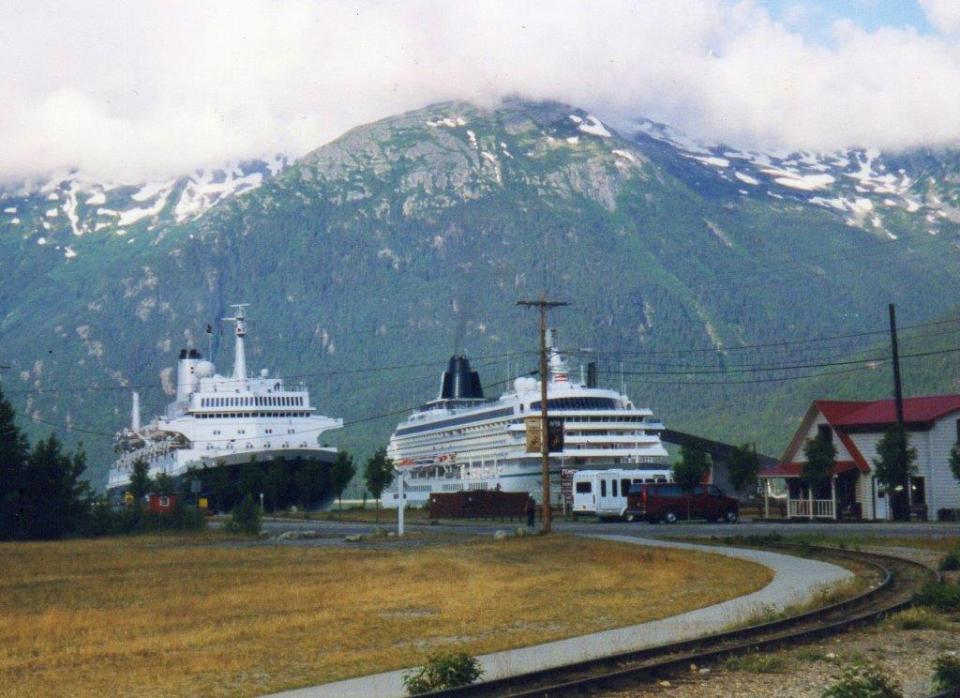