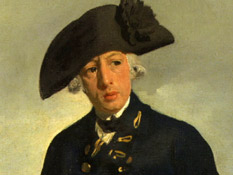 The west side of Sydney Cove (dated between 1792-1795). The hospital complex is in the fenced area with the residences of the surgeon and assistant surgeon on the far right. The portable hospital is the long white building behind the hospital wharf. The original hospital is the biggest building in the centre. 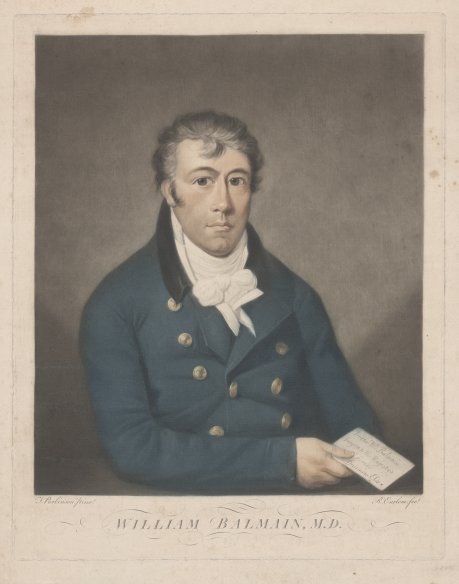 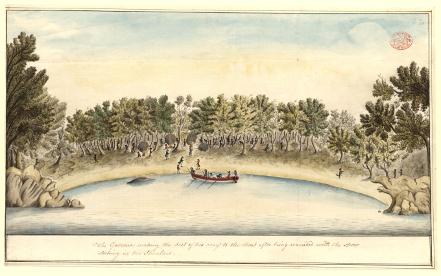 Arthur Phillips being taken to the boat after being speared. From National History Museum (London) First Fleet Artworks Collection Image 182 from the Watling Collection .

The First Fleet of eleven ships, including six transports, which arrived in Port Jackson in January, 1788 was well served by medical men.  It carried nine for the 772 convicts, officers, marines, crew and some wives and children who endured the journey of 10,000 miles from Portsmouth.  Contemporary documents show that Governor Arthur Phillips was a fortunate choice for the new colony because of his concern for public health.  Health on the voyage was remarkably good during the eight months voyage with only about 34 deaths and no major outbreaks of disease.  Phillips’ interest and humanity continued after arrival in Sydney Cove despite shortages of supplies.  However, at first the “surgeons” had the difficult task of attending to the sick in tents while emergency timber hospital huts were being built.  The makeshift hospital was stocked with only rudimentary supplies and the surgeons were assisted by untrained convicts. A prefabricated portable hospital arrived with the Second Fleet.

Although three of the surgeons left journals and books which were subsequently published they include little information about themselves and their colleagues.  So much so that the number of surgeons varies in various accounts – whether eight or nine - largely because virtually nothing is known about James Callum whose correspondence provides little useful information.

However, a great deal is known about the third assistant surgeon to John White the principal surgeon.  William Balmain, who sailed on the Alexander, over time established himself in the colony, became Civil Magistrate and left his name on a popular suburb in the inner- west of Sydney.

Balmain was born in Perthshire, Scotland in February, 1762, studied medicine at Edinburgh University and entered the Royal Navy in 1780 as a Surgeon’s Mate.  In October, 1786 Balmain applied to join the group destined to establish the new colony in New South Wales.

On September 7, 1790 Governor Phillip was speared in the shoulder by hostile natives at a place he named Manly.  The Governor was brought to Sydney Cove where Balmain came with his instruments.  After Balmain had examined the wound the Governor asked him to tell him candidly how many hours he had left to settle his affairs.  Balmain skilfully removed the broken spear which was protruding through the shoulder, dressed the wound and assured the Governor that he did not expect any fatal consequences from the wound.  It is said that Balmain’s appointment as Senior Surgeon on Norfolk Island in 1791 was a reflection of Phillip’s appreciation.

Balmain was critical of his superior John White, with whom he fought a duel resulting in a wound to his thigh. When appointed principal surgeon at Sydney Cove in 1796 he made persistent requests for more medical supplies and manpower, and for stores which were desperately short.  By this time there were 1600 settlers and several thousand convicts.  Balmain had only one assistant surgeon and found the task of caring for the health of the entire population arduous and frustrating.

Over the years Balmain received a number of grants of land including, in 1800, 550 acres on the peninsula now the suburbs of Rozelle and Balmain.  The following year he transferred his holding to John Gilchrist to settle a debt before returning to Scotland.  For a time the area was called Gilchrist’s Place - but its present name is Balmain.