THE COAL MINE AT BALMAIN 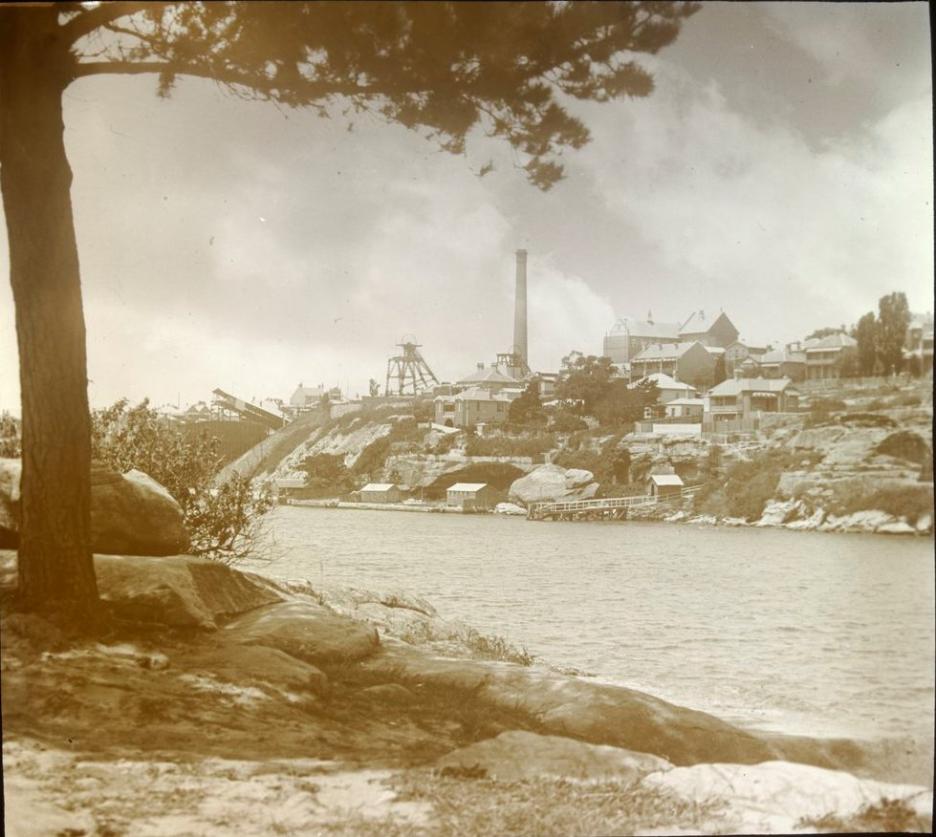 Balmain Colliery from across the Harbour by John Henry Harvey, 1855-1938 photographer, courtesy State Library of Victoria.

THE COAL MINE AT BALMAIN
By George Repin

When he arrived in Sydney in October 1925 Ivan Repin could not work as a mining engineer because his professional qualifications were not recognised in Australia.  It would be a further 5 years before he opened his first café in 1930 starting a successful chain of coffee shops which in the nineteen thirties were popular and a feature of the Central Business District of the city.

In the meantime, however, he had to find work. Through Daniloff, a miner who had worked for him in the coal mines of the Don Basin in Russia, Repin was employed in the colliery at Balmain.  Few people in Sydney know of this mine which started operations in 1897 and was the deepest ever worked in Australia.  It ran under the harbour from a site to the north of the Birchgrove Primary School. 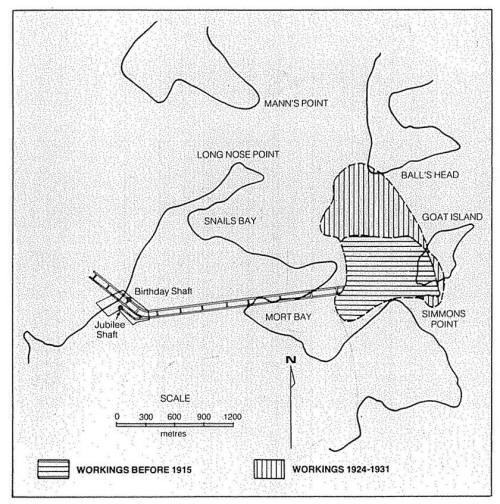 Location and extent of the Balmain Coal Mine

Ivan Repin lasted in the job for three months – his services “being dispensed with owing to the partial closing down of the Mine”.  This probably was not a bad thing for him in the long run as working conditions in the mine were poor and it suffered several disastrous accidents.

The Balmain mine was never a commercial success.  Apart from the cost of the site, bought in 1895 for $15,000, considerable expense was incurred in sinking two shafts each 18 feet in diameter and fully lined, using over four million bricks. Other heavy expenses were the cost of surface machinery and buildings and the reclamation of a 580 foot wharf which provided 26 feet of water at low tide. 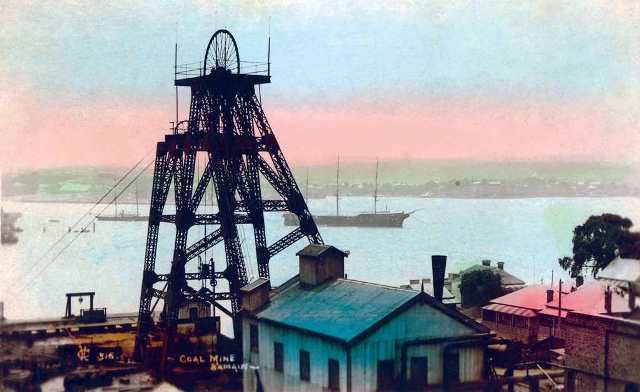 After five years of “sinking”, coal was eventually struck at 2880 feet but was split into several seams, the largest being only 2 feet 4 inches. Further out under the harbour the seam improved to an average of 4 feet 6 inches but the company never managed to produce enough coal to get a cash flow sufficient to offset the huge capital costs. It ran out of cash and work stopped in 1915.  The mine was reopened in 1924 but after continuing industrial and financial troubles the operating company was liquidated in 1931 and coal mining at Balmain ceased.

Throughout its operations working conditions in the mine were poor. It was hot, dusty and gassy.  Because of the depth of the mine and poor ventilation the temperature, at over 90 degrees F., was too high for dust to be settled by water sprays as the humidity would have been unbearable. 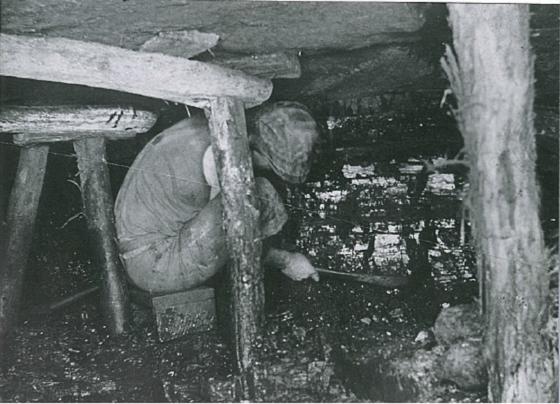 In a letter to the “Labour Daily” in 1924 a miner described conditions working in the mine, including a graphic description of walking from the shaft bottom to the coal face. “We start in single file – a stream of men about 70 in number.  The dust begins to rise from under our feet and we are in a cloud due to horse refuse and stone dust” …..”After the best part of an hour’s walk under beautiful Sydney Harbour we reach, in a half-dazed state, the coal face”. The whole letter is reproduced in the publication cited at the end of this article.

The property was sold in 1955.  Each shaft was filled with fly ash from the White Bay Power Station and concrete seals were placed on the shaft heads by 1957.

The description of the Balmain mine in this article is based substantially on the following publication:

Balmain Coal Mine - from the ages of the past
BALMAIN COAL MINE.
The sinking of the Jubilee shaft at the Sydney Harbour Collieries at Balmain is progressing satisfactorily, and-is now down 2820ft. It is expected that In the course of a fortnight the coal seam struck at 2880ft in the Birthday shaft will be reached. The drives from the Birthday shaft have now reached about 600yd from shaft, and about 100 tons of coal weekly is being raised, for which there is good local demand. The seam has widened about a foot in the drives, and the future prospects are encouraging. j In the annual report for 1905 of the Mines Department, which has been issued.
Senior- Inspector Humble states:— The work at Sydney Harbour Colliery is proceeding satisfactorily. Good progress has been made , in the sinking of the Jubilee shaft, which at the close of the year _ was -down about 2440ft.-. and bar accidents should reach the seam at 2880ft .in May .next (this month). Last July, while sinking through hard grey shales and sandstones at a depth of 1830ft. an outburst of gas was met with. This ignited at the open acetylene lamps then in use, and slightly- burnt three of the sinkers. The amount of ventilation supplied was about 5090 cubic feet of air per minute/ ~ Since, the accident, safety lamps have been used. From time to time gas is liberated and fired by the gelignite charges fired electrically. The two drives in the coal seam 'from the Birthday shaft are upwards 'of 450yd from the shaft bottom, and considering all the circumstances, are making fair progress. The ventilation, amounting to 5000 to 7000 cubic feet, is coursed to the face of each place by air boxes, the cut throughs being 44yd apart. ' Gas is troublesome, but not more so than it was months back, when ; the distance from the shaft was less ] than one-half it now is. At that time the men had frequently withdrawn by reason of emissions of gas fouling the air current; but this trouble has not been so prominent of late. When the Jubilee shaft is connected with the workings there will be abundant ventilation, and better progress will, doubtless, be made; and it is to be hoped the seam will increase in thickness, and give the plucky company a return for the work done and money expended!' The Jubilee shaft, the sinking of which will shortly be completed, will be used as a ventilating shaft, and enable the management to put on a large number of men to develop the work, as well as raise more coal. 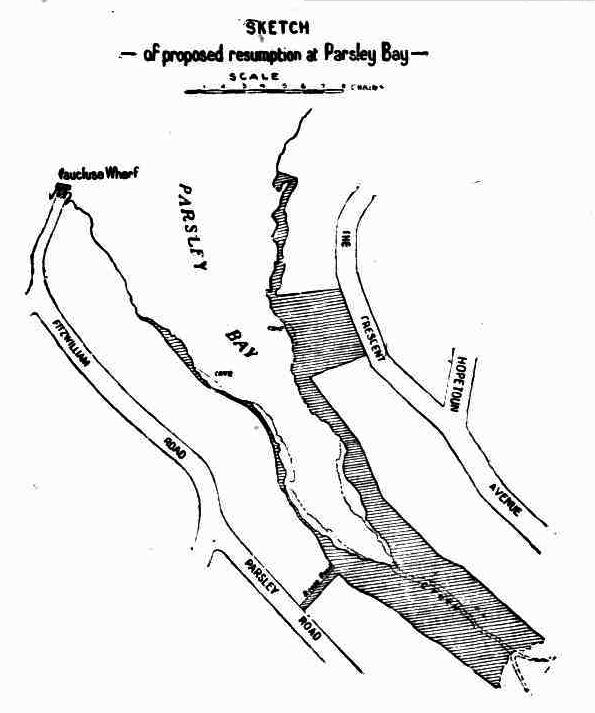 As a result of the agitation of yachtsmen and others, the Government has signified its Intention of resuming, at a cost of about £6000, that portion of Parsley Bay on the southern side of Sydney Harbour, which has always been a favourite resort for boating parties. The shaded portion in the above plan indicates the parts to resumed. BALMAIN COAL MINE. (1906, May 2). Evening News (Sydney, NSW : 1869 - 1931), p. 6. Retrieved fromhttp://nla.gov.au/nla.news-article114324273
BALMAIN"S MINE COAL IN CITY'S BACKYARD
Sydney is the only capital city in the world which has a coal mine underneath it. After lying idle for eight years the Sydney Harbor's Colliery's mine at Balmain has been reopened. Many tons of coal have' already been raised, and the first of it has just been put on the market.
OUR prosaic earth holds very few places where you can let ships sail and sharks swim over your head without the discomfort of a diving dress. Sydney Harbor is one of them. | Between Bullast Point and Goat Island or Ball's Head you can walk at ease with over half a mile of solid rock and anything up to 60 feet of salt water-above you. To do this you have to drop 880 feet down the shaft of the Sydney Harbor Colliery, Ltd., at Balmain, and walk along an underground Pitt-street a for a mile or more. There was much talk some time ago about a tunnel under the harbor. There is already a tunnel there. Carry it a little farther, put a shaft at the other end, and run electric trains along it with lights at each end, and why bother about a North Shore bridge? 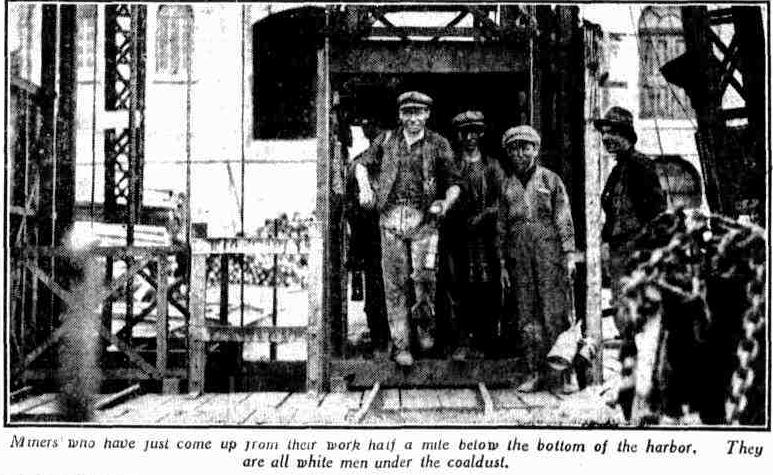