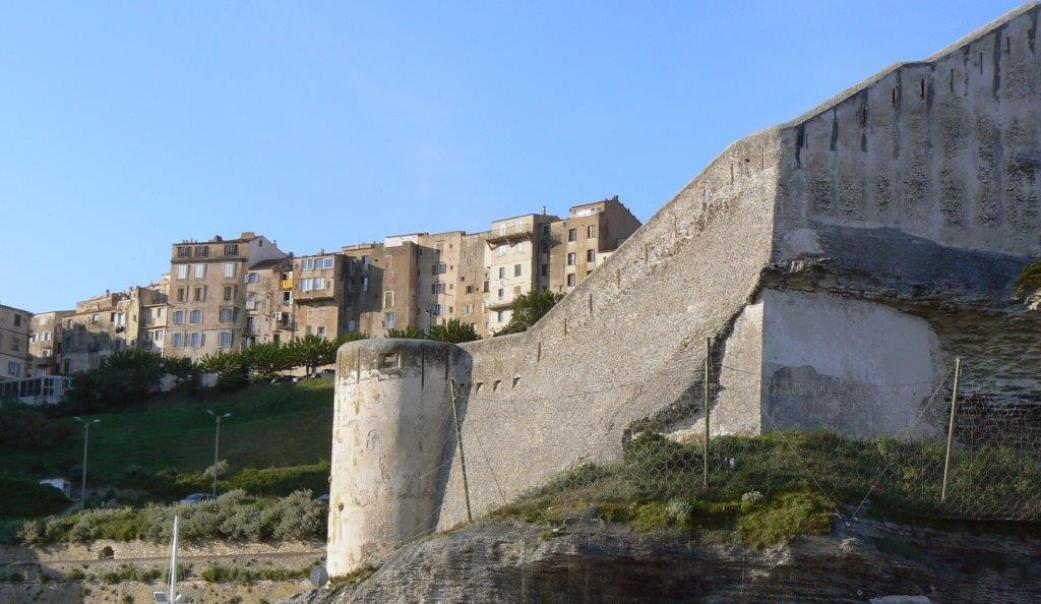 Buildings overlooking the harbour with fortifications in the foreground.

By George Repin
The island of Corsica in the Mediterranean Sea, is 90 Kms. from Tuscany on the west coast of Italy and 11 Kms. north of the island of Sardinia.
Napoleon Bonaparte was born in Ajaccio the island’s capital, in 1769.
Over the course of history the island was ruled by various nations.  From 1284 it was ruled by the Republic of Genoa.  After a brief period from 1755 to 1769 when it was an independent Corsican Republic, it was conquered by France and remains part of France to this day.  However, because of its historical ties with Italy, the island retains many elements of the culture of that country.
The port of Bonifacio on the Bay of Bonifacio, at the south of the island, is the prime attraction in Corsica.  It is a submerged ravine with a fjord-like appearance separated from the sea by a finger-like promontory 4,900 ft. long and 660 ft. wide. The harbour provides vessels with a maximum draught of 11 ft. and, effectively, is in three parts – a fishing port, a pleasure port and an area from which tour boats leave for Lavezzi Island and across to Sardinia.  The pleasure port is elegant with palm trees, bars, shops and restaurants. 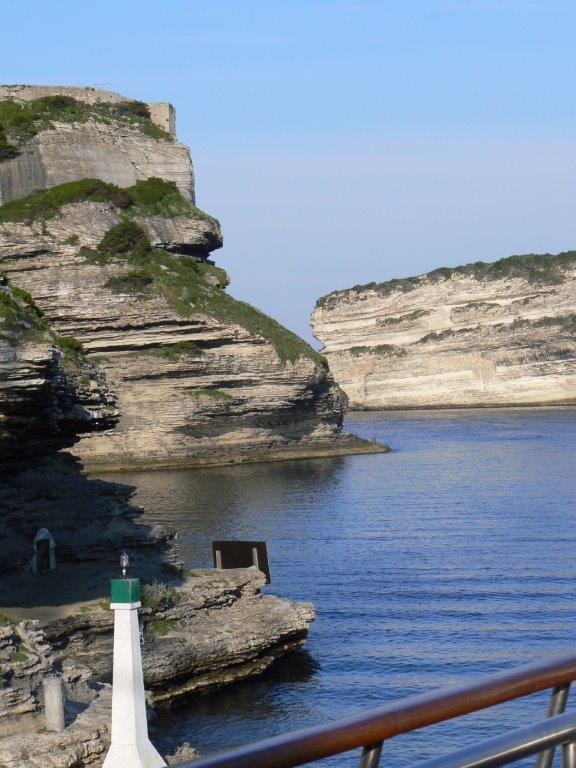 The narrow entrance into the harbour of Bonifacio.
In addition to the port, the old town and the citadel are the main areas of interest.
The medieval old-town of Bonifacio is the oldest town in Corsica, set about 70 metres above the harbour in a spectacular setting on the top of the cliffs of the white limestone peninsula.  It is a maze of narrow cobbled streets and medieval buildings, picturesque squares and small cafes, entered through an imposing gateway in the walls of the citadel at the top of the path from the harbour. The centre of the town is around the Place d’Armes and the Place du Vieux Marché.  Important religious monuments include the 13th Century Church of Saint-Dominique and the 12th Century Church of Sainte-Marie-Majeure – the oldest building in Bonifacio. 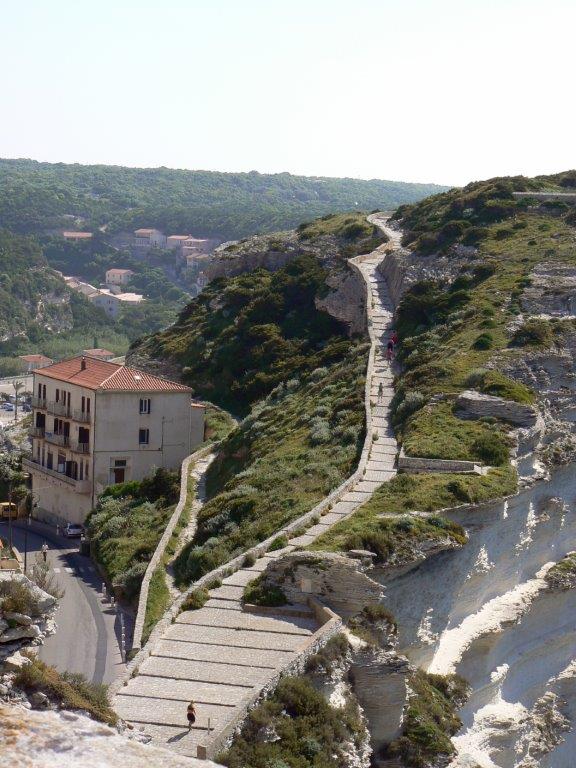 The path up onto the peninsula. 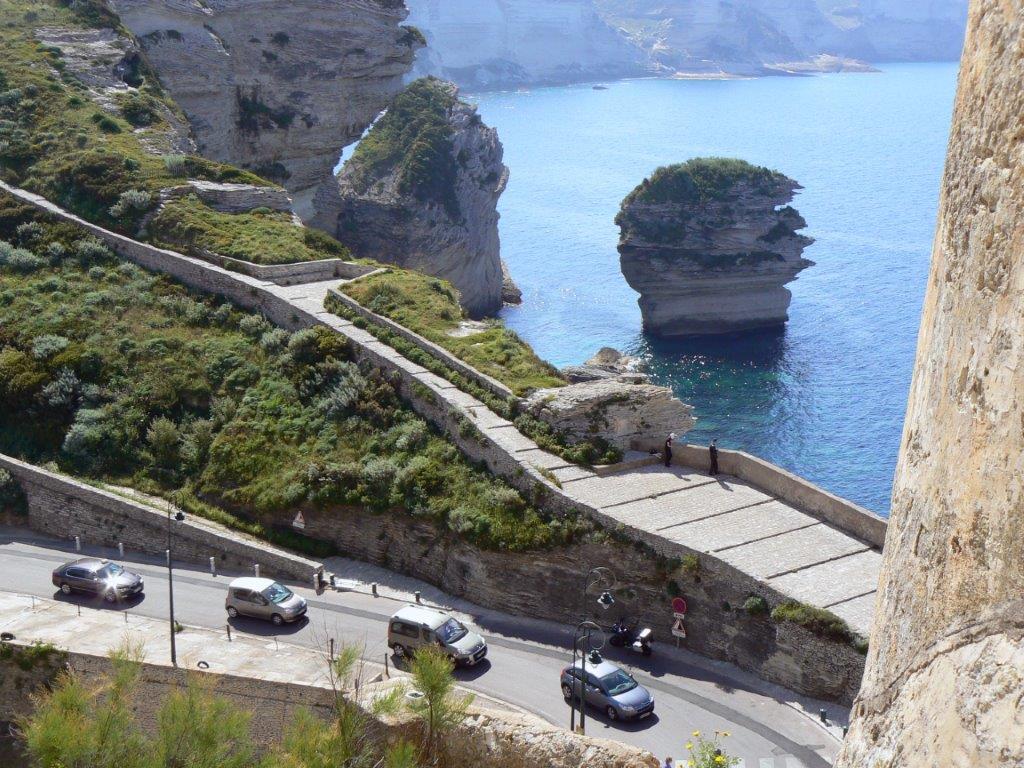 The path on to the peninsula and road to the citadel. 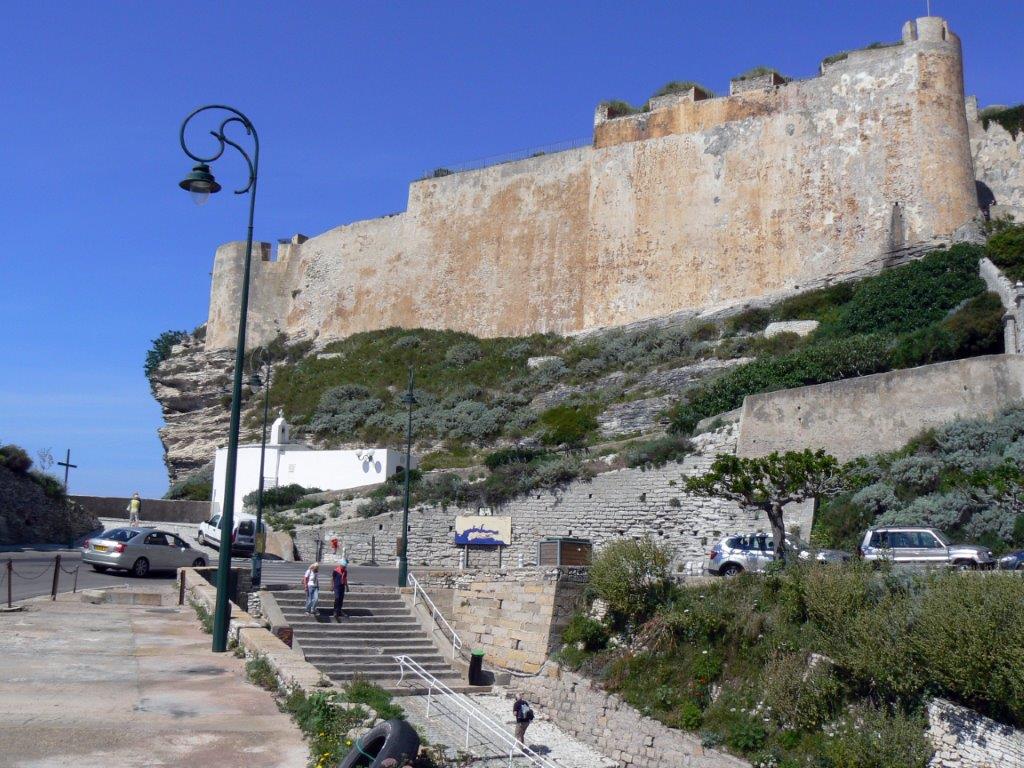 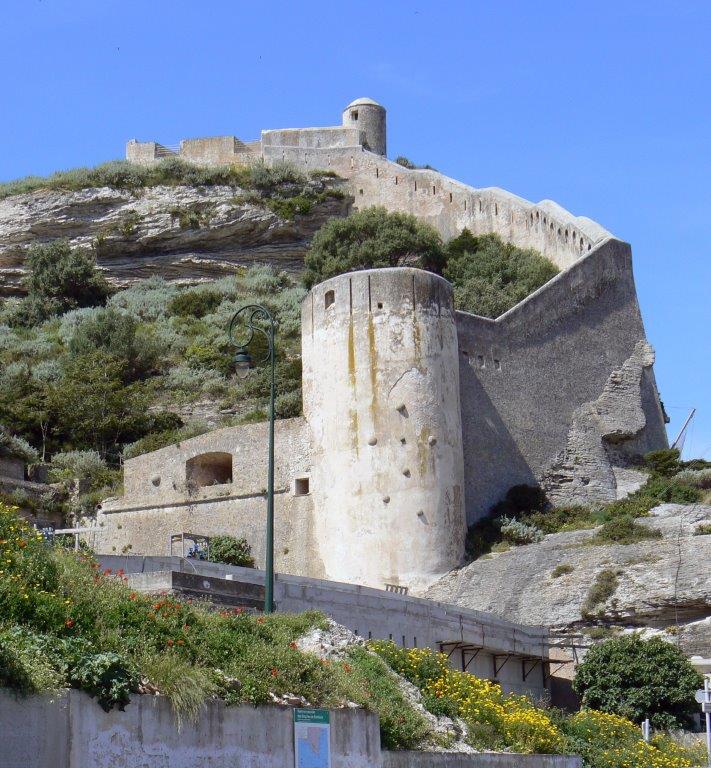 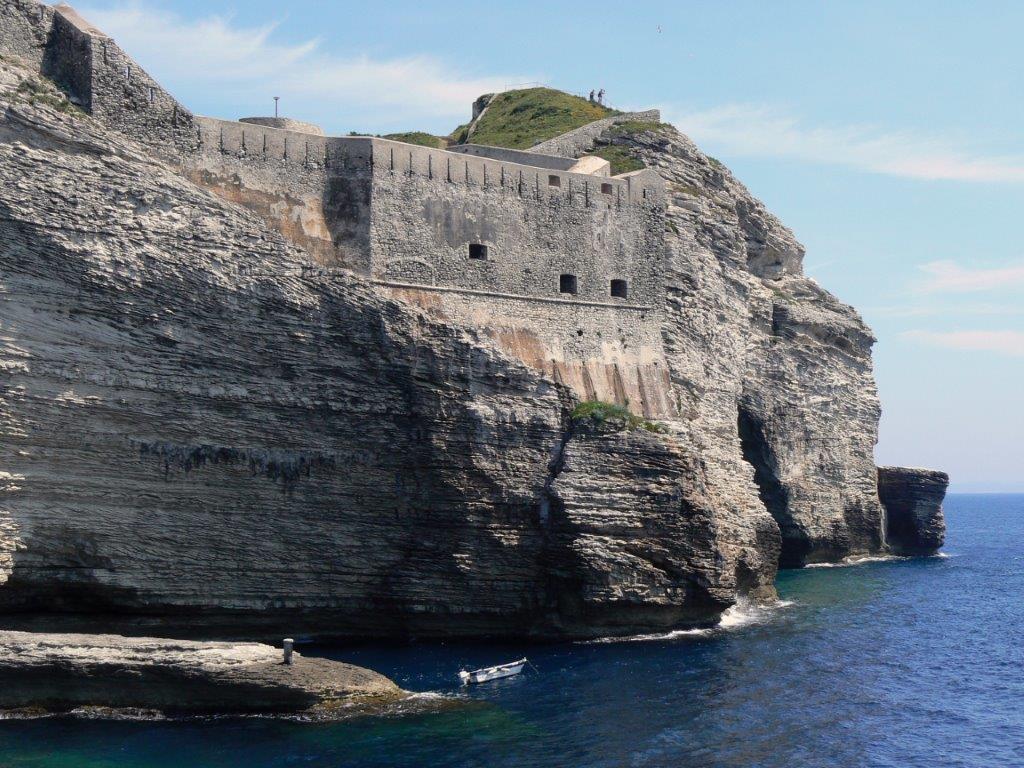 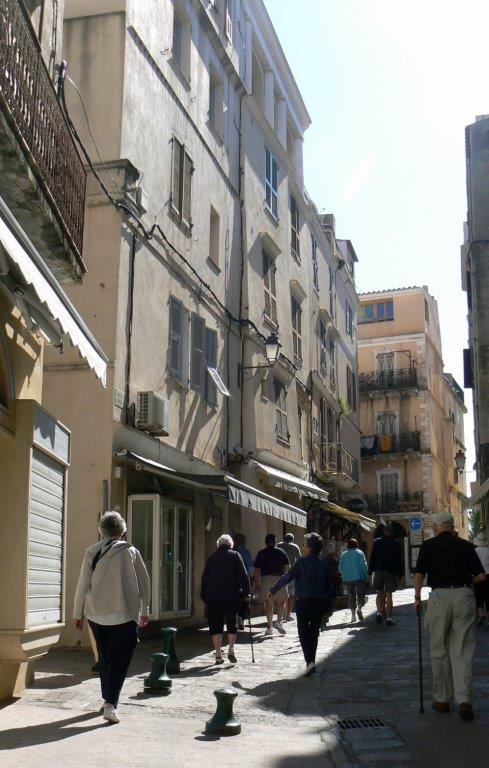 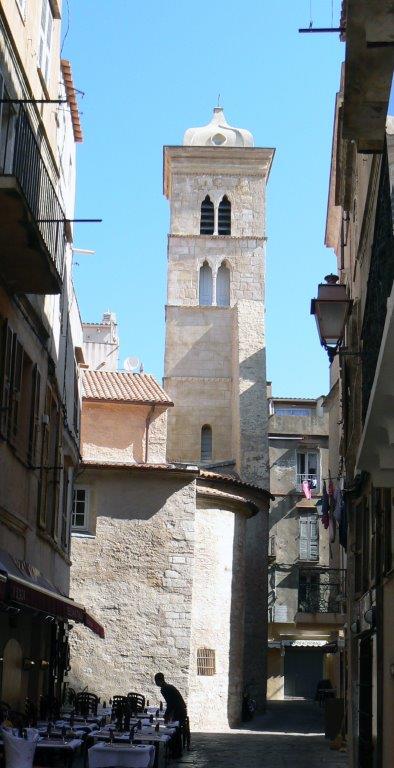 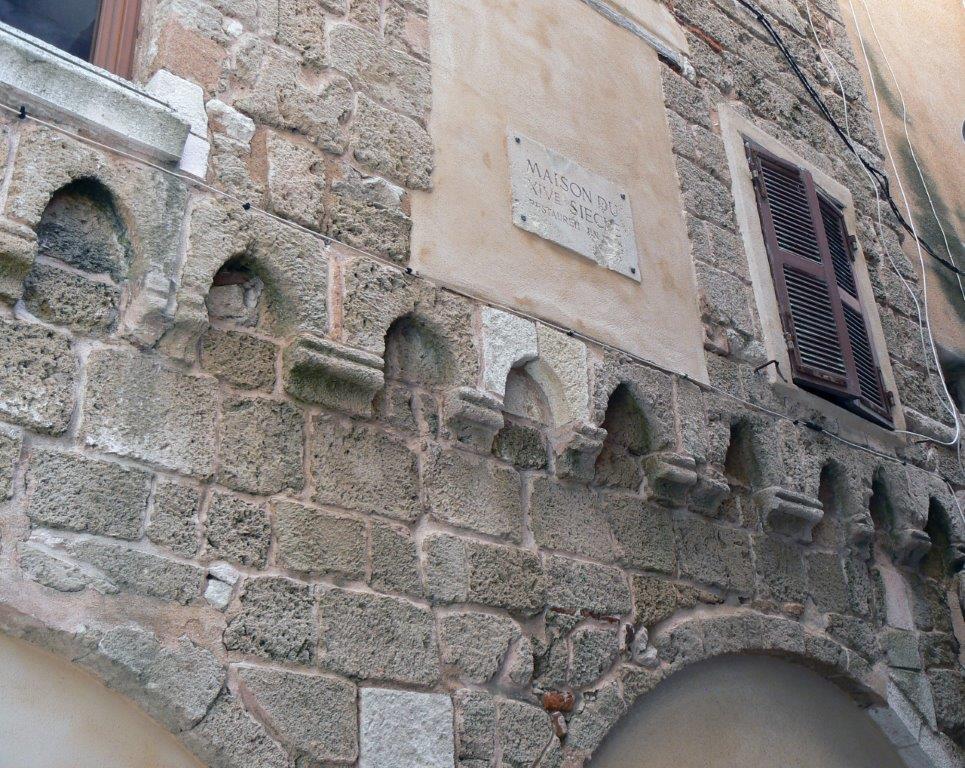 Close up view of the stonework construction.
A walk onto the peninsula provides outstanding views of the citadel, fortifications and the harbour entrance with the red lighthouse across the water.  TheTerra di sole cimetiere marine – a lovely cemetery laid out like a small town, is here. 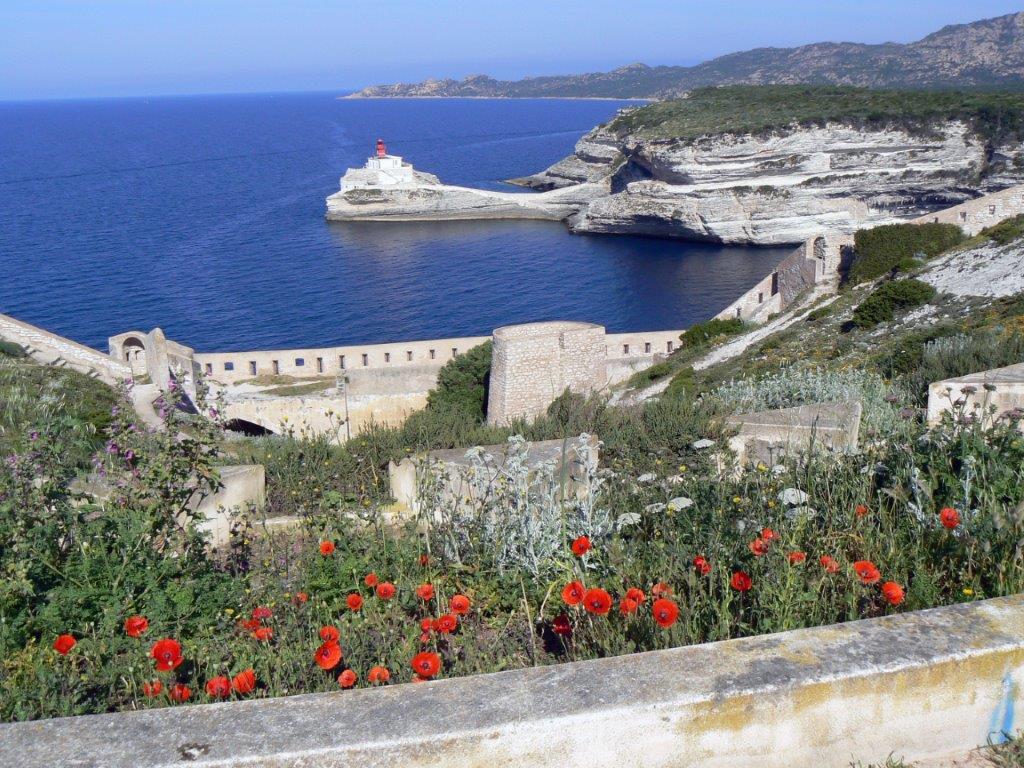 View across the harbour entrance towards the red lighthouse. 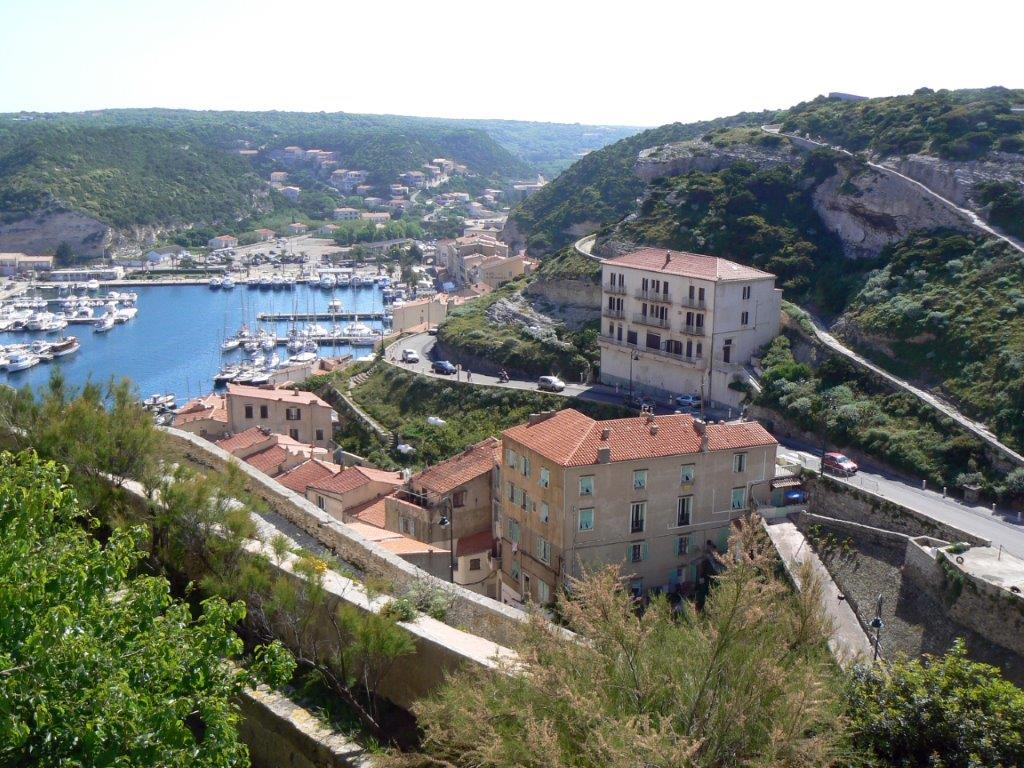 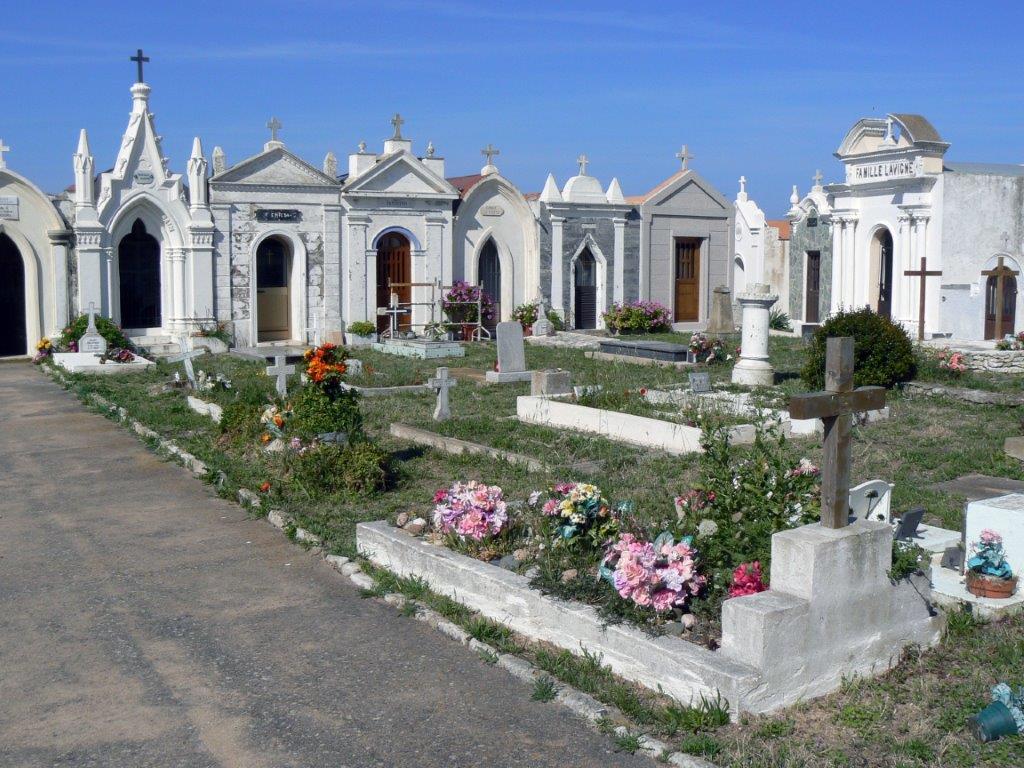 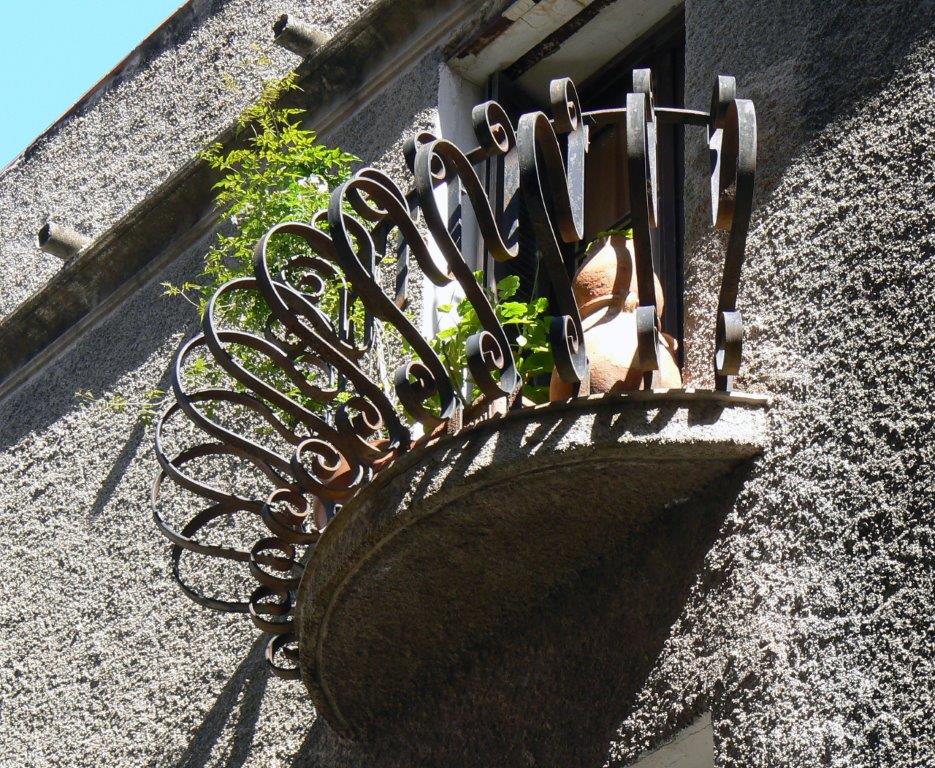 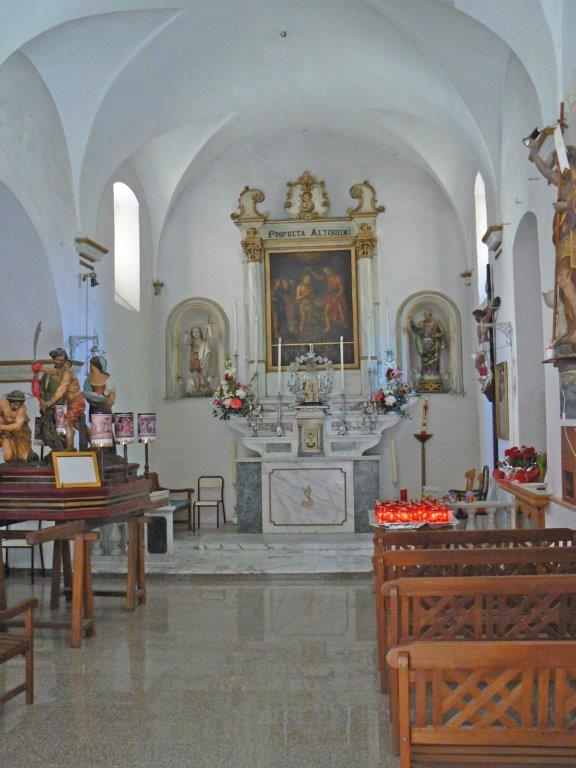 Interior of the Church of Saint John the Baptist.
The upper access to the so-called Staircase of the King of Aragon (Escalier du Roi dÁragon) is on the peninsula.  The staircase appears as a diagonal linear scar at an angle of 45º  in the limestone cliff when seen from the water.  It consists of 187 steps.  According to legend it was cut by the troops of the Aragon King Alfonso V, in a single night, during the unsuccessful siege of Bonifacio in 1420.  In reality it was made by Franciscan monks to reach a cave with a natural spring of pure water. 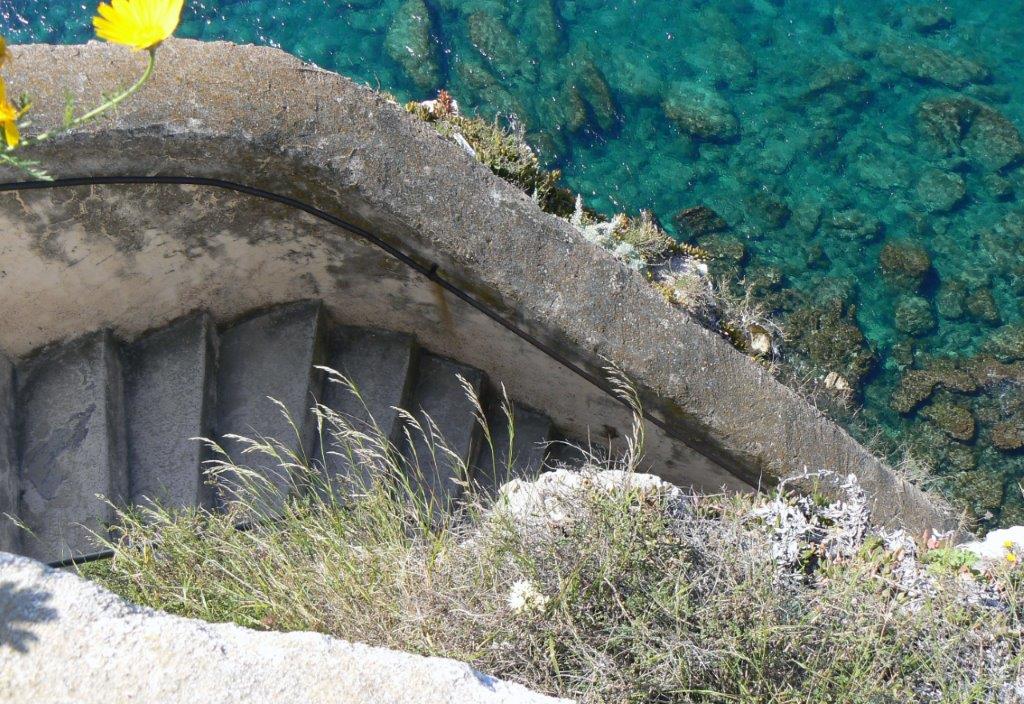 The way in to the top of Escalier du Roi d'Aragon. 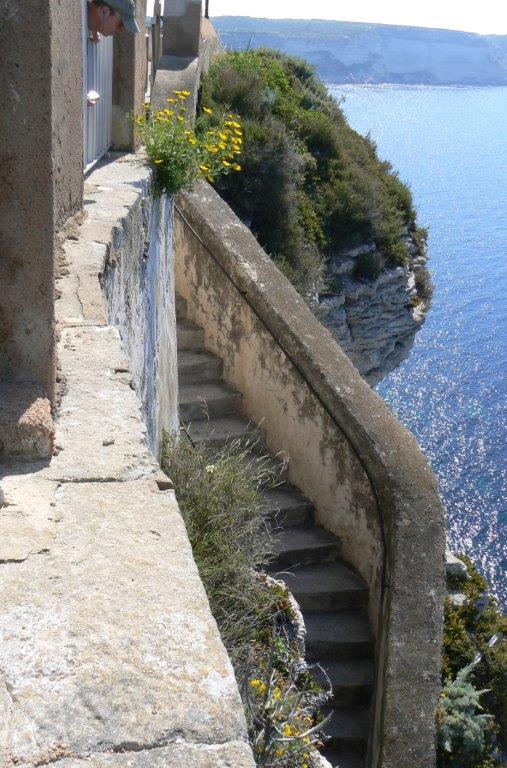 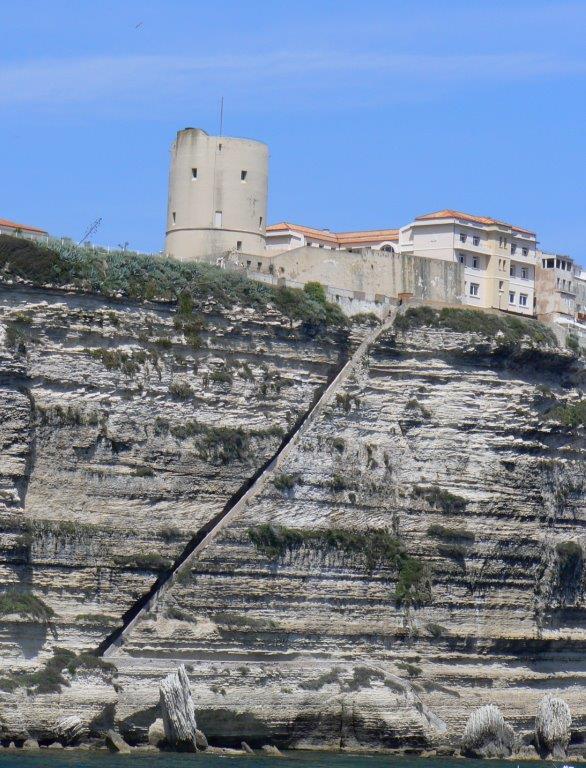 The staircase seen from the sea. 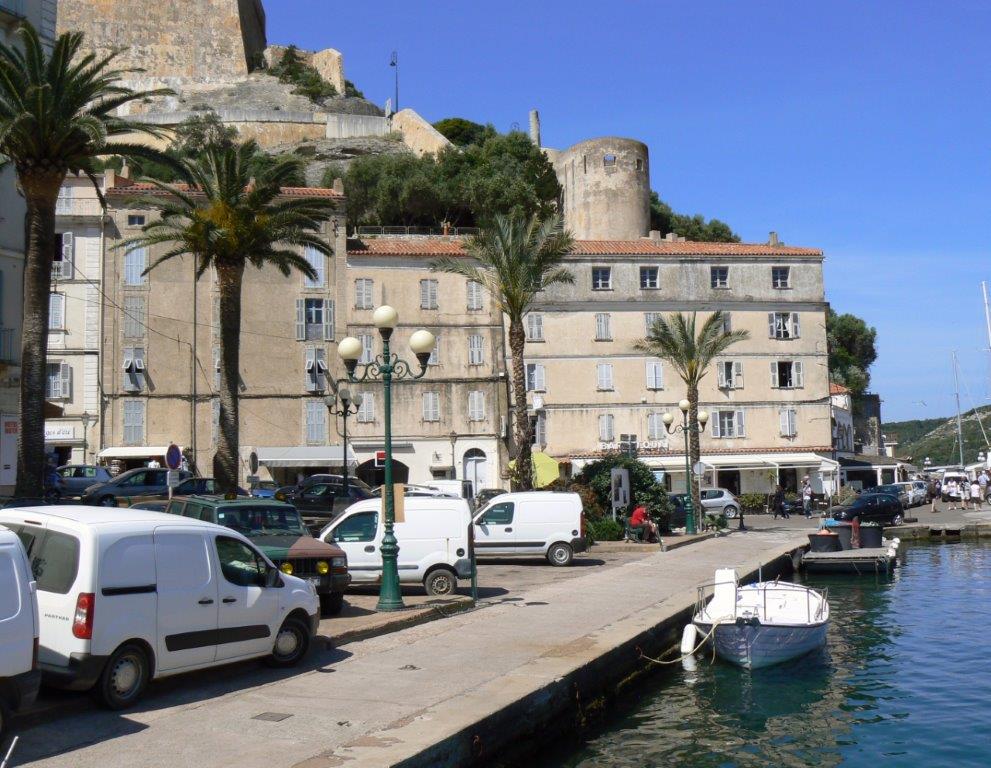 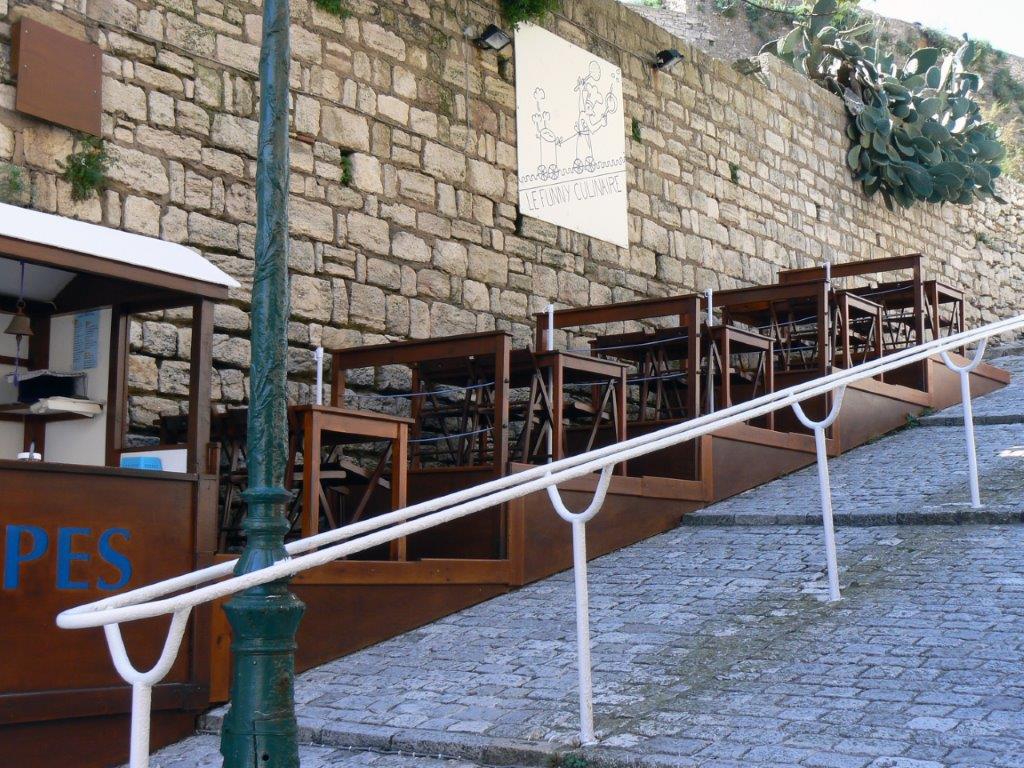 Enterprising use of limited space by a café.
Bonifacio is a popular destination for tourists both from mainland France and from Italy.
(Photographs by George Repin in 2011)