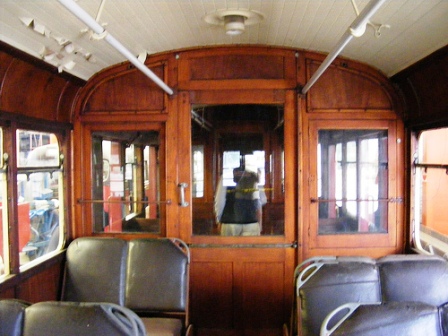 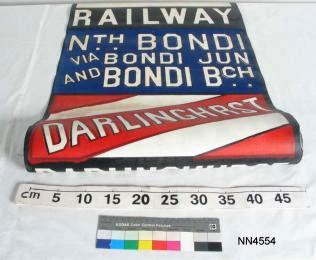 Statement of significance
The distinctive coloured symbols which appeared on many of the destinations signs displayed on the front and rear of Sydney's electric tams originated from the days of steam operation. They first appeared in May, 1881, in the form of coloured painted plates placed on the front of the steam tram motors above the painted destination name board. At night they were replaced by oil lamps with coloured shades.

The different colour code adopted for each line or group of lines served several purposes. They provided easy identification of tramway destinations for passengers, who were illiterate, unable to read English or had poor eyesight. Furthermore, in the later years of steam operation, the codes enabled staff at the congested dead-end city terminal at the Bridge Street Yard to readily identify rapidly approaching trams and thus ensure they were quickly placed and shunted onto the correct track for the return journey.

With the opening of the George Street electric line in 1899, larger glass-fronted and internally illuminated boxes were introduced on the ends of electric cars. These boxes had sufficient space for the display of the appropriate coloured symbols and the name of the terminus. The linen rolls were attached to rollers inside the top and bottom of the boxes and were turned by handles on the outside. Destination signs were also displayed on both side of all cars and conductors were required to ensure that both near and offside boxes always displayed the correct destination. On the coupled sets an intermediated termini was usually displayed on the first car. The side signs originally featured black printing on a white background but this was later replaced by white writing.

Shooting Through like a Bondi Tram
By George Repin

This once popular expression is rarely heard today.  Anyone hearing it who had never travelled from the city on the North Bondi via Bellevue Hill tramline might not understand it - but others, who had, would understand the reference to the interesting and exciting ride it gave passengers.  There was another Bondi Tram which left the city along Liverpool Street taking an uninteresting route along Oxford Street through Taylor’s Square, skirting Centennial Park, through Bondi Junction and down Bondi Road to the beach – but the tram via Bellevue Hill was something again. 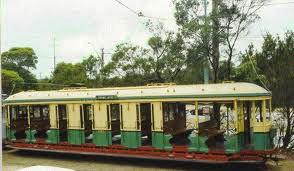 Starting at Circular Quay it turned left from Elizabeth Street into Park Street down the hill, between the City Bowling Club (now gone) and the Australian Museum, to Yurong Street where it turned hard right passing a drab building which over time was The Ice Palais a skating rink, a store during World War II and later Government offices.  A quick turn into Stanley Street, a short run past Woolloomooloo terraces in poor repair and right into Bourke Street where the bakery smells from the Sargents pie factory quickly assailed the nostrils.  Left again, up the rise past the back of the Darlinghurst Police Station and the old Darlinghurst Gaol (now the East Sydney Technical College) on the right.  A quick run down the hill past St Vincent’s Hospital and across the viaduct (now a roadway) into Paddington.  Here passengers were immediately hit by the smell of tobacco from a small factory on the right where sometimes, in a scene reminiscent of the opera Carmen, factory girls stood outside smoking.  The tram then wound up and down along a route sometimes likened to a goat track, through the narrow streets of Paddington lined by badly maintained terraces.  On each side of the tram rails there was barely room for a car to pass – not that there were many cars on the road.  It was some years before Paddington became a trendy place to live.  Ultimately turning left into Queens Street the route dived down to Edgecliff Road and up to Victoria Road before sweeping down Birriga Road from the Bellevue Hill Public School to Curlewis Street. Then it was a straight run, past a stone quarry (now a service station) to the beach front at Bondi.  Turning left, an amusement park on the left and the Hotel Bondi (thought to be a “white elephant” when it opened in 1920) on the right, the tram climbed to its terminus at North Bondi.  Here the seabreeze generally was pleasant but, with an unfavourable wind, the smell from the stack over the Bondi sewer outfall was all too apparent.

Over the years Sydney trams developed through a series of Classes.

Early trams consisted of a series of compartments. In the “O” Class two compartments were open at each end of the carriage. The entrances, with sliding doors, were at the ends of each closed compartment.  Passengers sat on wooden benches facing each other with standing passengers between their knees.  The conductor swung himself precariously to collect fares, from compartment to compartment, on a running board along the side of the tram,.  “E” Class trams were referred to as “Toast Racks”.  The accompanying picture shows two coupled “E” Class trams at Bondi Beach. The “P” Class were a more “refined” Toast Rack.

Destination signs on the older trams, in addition to suburb names in printed form, included coloured patterns to help those who were unable to read to recognise where the trams were going.
The North Bondi via Bellevue Hill line and that from the city to Watsons Bay were the first to introduce the “R” Class, smart new corridor trams, with comfortable leather seats.

Trams in the Woollahra Municipality were replaced by buses in 1957 and the last Sydney tram routes switched to buses in 1961.