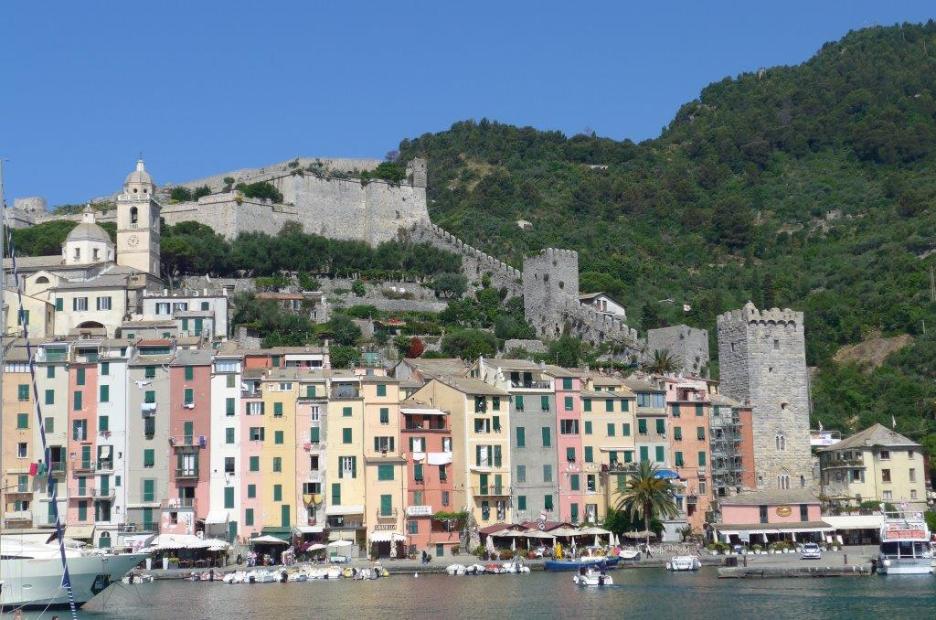 The five coastal villages of the Cinque Terre are on the coast of the northern Italian region of Liguria, west of the city of Spezia. The Cinque Terre means Five Lands and comprises the villages of Monterosso al Mare, Vernazza, Corniglia, Manarola and Riomaggiore. The coastline, the villages and the hillsides which rise steeply from the sea, are part of the Cinque Terre National Park set up in 1999 to conserve the ecological balance, protect the landscape and safeguard anthropological aspects of the area. It is a UNESCO World Heritage Site.

The villages are either concealed in small inlets or cling to the steeply terraced cliffs which are cut across by a complicated system of fields and gardens. The terraces took perhaps two centuries to build because of the enormous work of transporting and carrying the heavy stones required in their construction.

It appears from historical records dating back to the 11th Century that Monterosso was the first of the villages to be established (in 643 CE) and the others followed. The main source of food was fish while grapes and olives were cultivated on the terraces. Herbs grew in abundance.

The cuisine of the area demonstrates respect for the flavours and fragrances of the main ingredients. Tagliatelle with a Ligurian sauce made from basil leaves, extra virgin olive oil, grated cheese, pine nuts and marjoram is just one of the local specialties as are the Anchovies of Monterosso designated with a Protected Designation of Origin status from the European Union.

Since the building of a railway line between Genoa and La Spezzia tourism has brought wealth into the area after a protracted period of poverty. The railway line on which a local train connects the villages to each other and La Spezzia provides easy access for those who are making a brief visit but also for the backbackers who set out to tackle the walking routes and enjoy the breathtaking scenery. Not all the walking routes are readily accessible and the cliff top path is sometimes closed because of rockfalls and landslips. While access by car to the heights above some of the villages is possible it is not ideal, both because of the narrow roads, absence of suitable parking and the distance from the villages a car must be left.

Boats from La Spezzia provide an ideal way of seeing the rugged coastline and the villages from the water and visitors, after disembarking at Vernazza and spending time in the village, can return to La Spezzia by train. 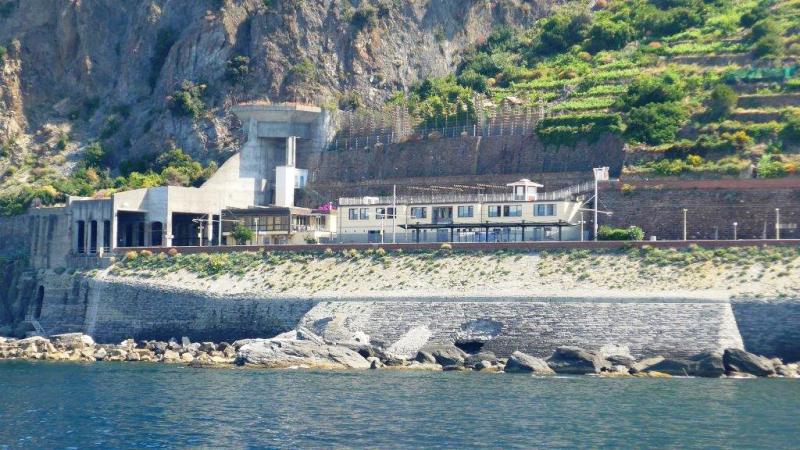 On the way from La Spezzia the scenery is magnificent. After passing Porto Venere, with the Dorio castle above the town, the boat passes the Gothic Church of Saint Peter (consecrated in 1198) with its 13th Century black and white striped additions. Then passing between Porto Venere and Isola Palmaria the boat continues north, with the cliffs towering above, past Riomaggiore, Corniglia, Manarola and Vernazza to Monterossa al Mare – which is in fact two towns connected by a short pedestrian tunnel. Unlike the other villages Monterossa al Mare has a large sandy beach with colourful umbrellas, beach-side restaurants and cafes and has been extensively developed as a resort. The boat then returns to Vernazza where passengers can get off to visit the village. 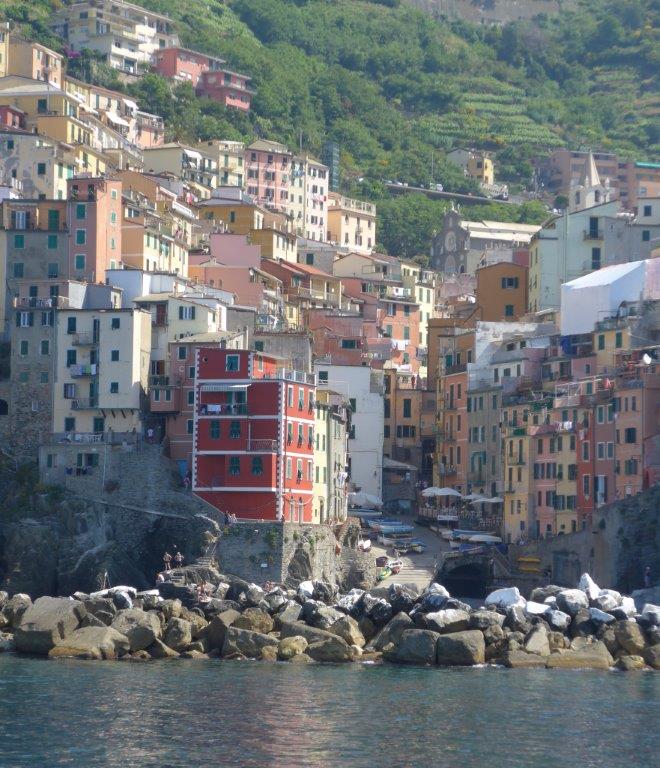 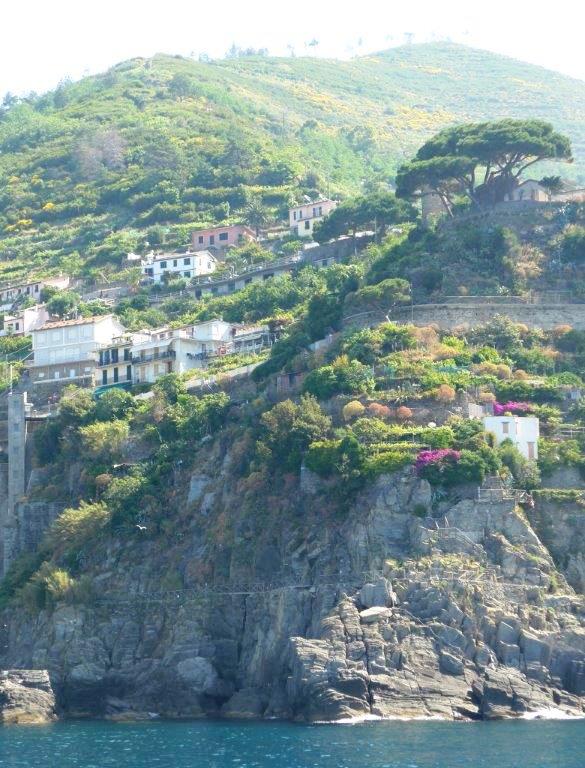 Every village has its own old church. An obvious feature of the villages when seen from the water is the variation in the colours of houses. Apparently this was to allow fishermen when out at sea to easily identify their houses and see what their wives were up to.

Photographs by George Repin in June, 2014. 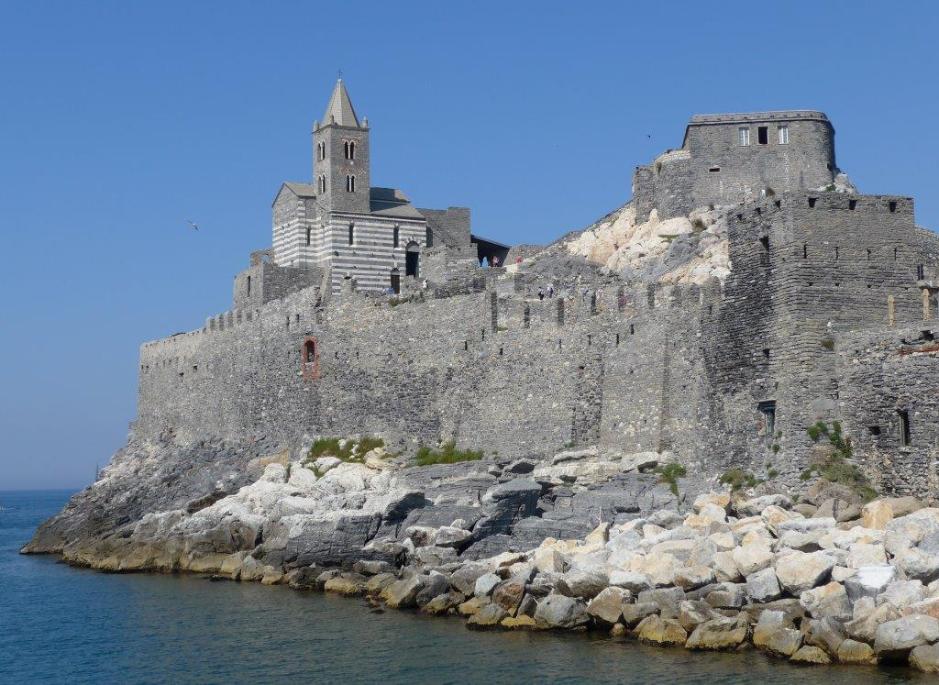 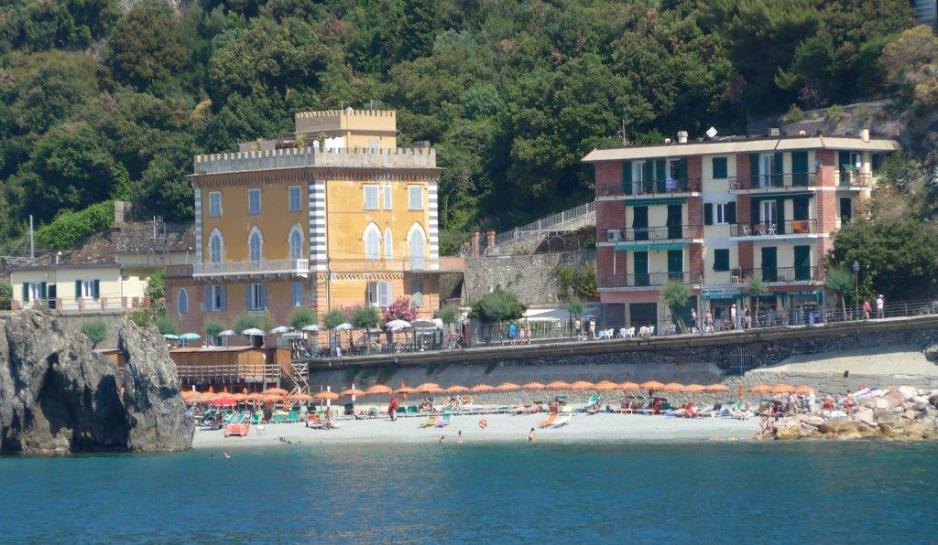 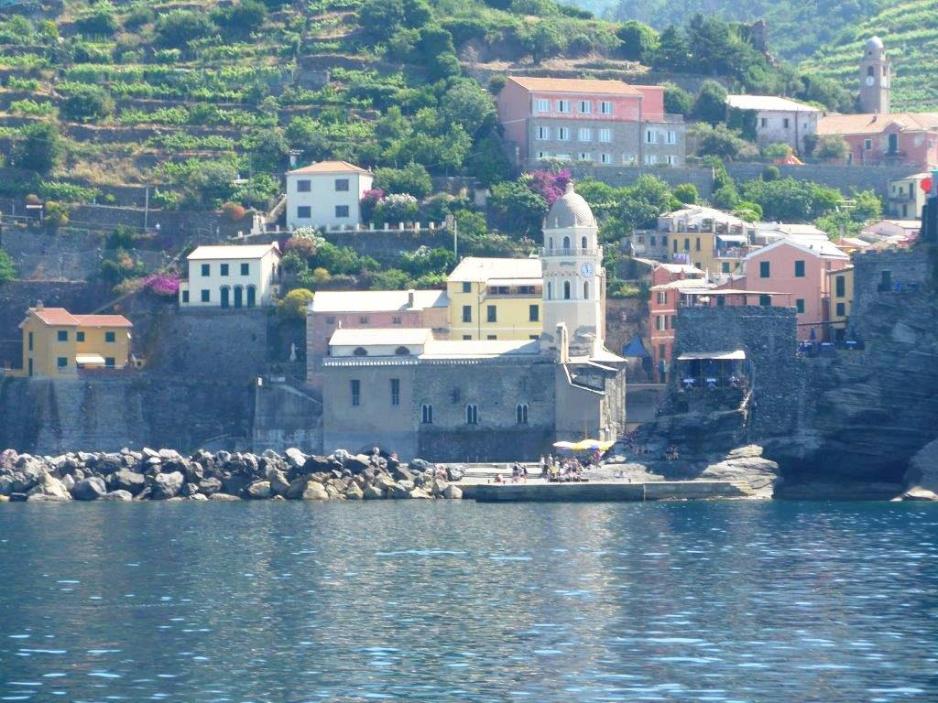 Above: Vernazzia seen from the water. 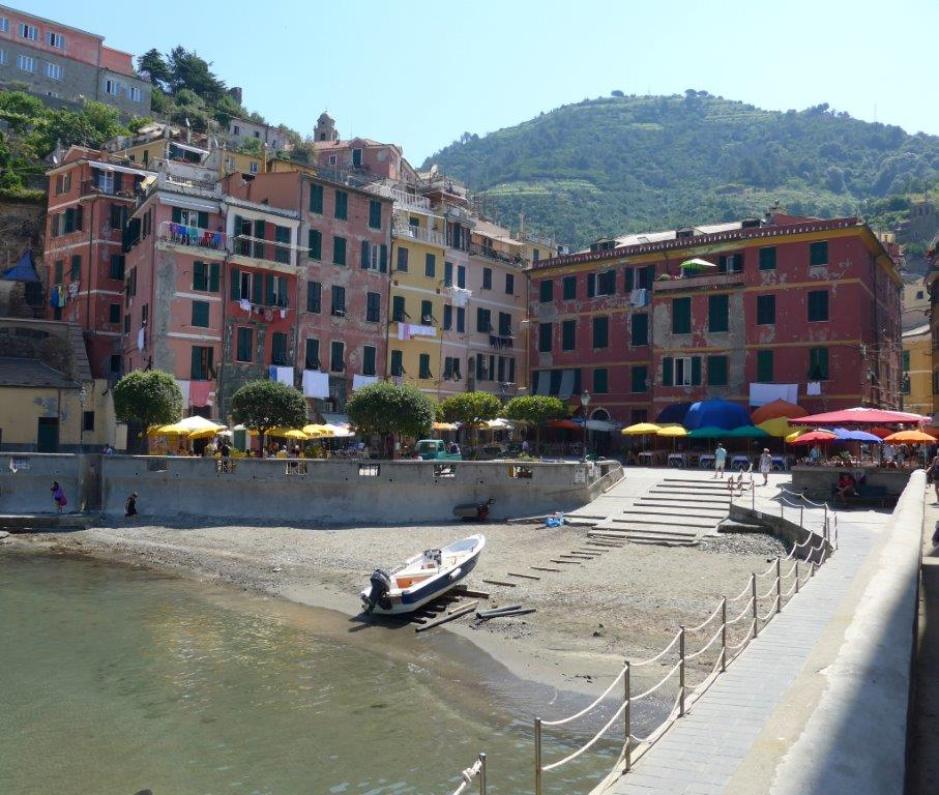 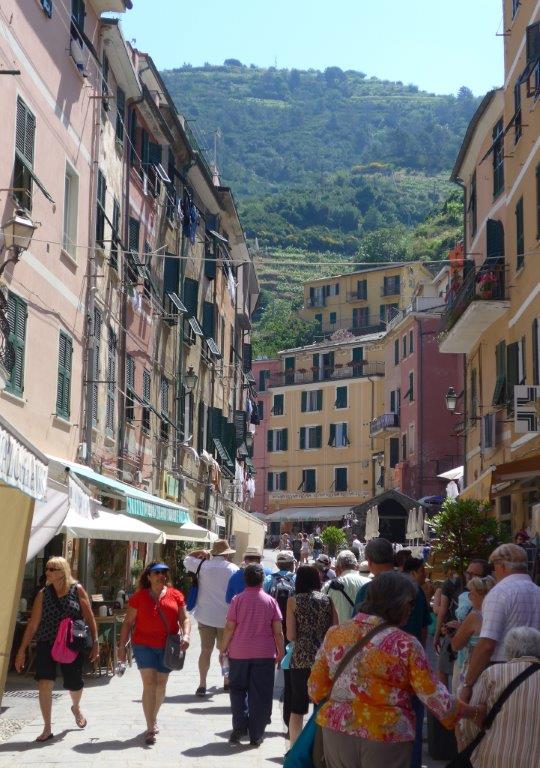 The main street in Vernazzia with tourists. 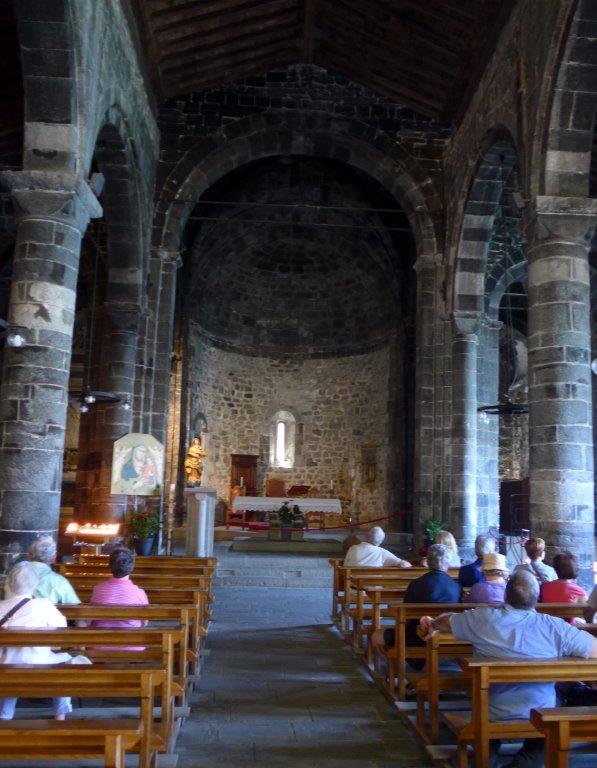 Interior of the church in Vernazzia