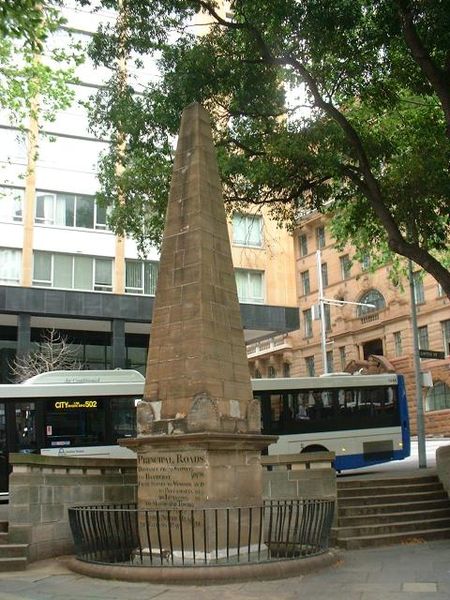 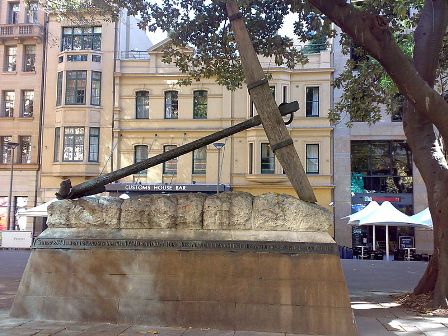 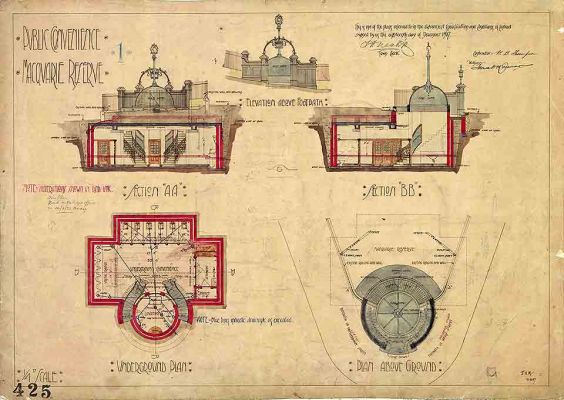 HOW FAR FROM SYDNEY?
By George Repin

When Captain Arthur Phillip, the first Governor of New South Wales, set up the European settlement in Sydney Cove he pitched a portable “canvas house,” brought with him on the First Fleet, near the original foreshore of what is now Circular Quay.  It was on the eastern bank of an open stream, the Tank Stream, flowing to the Cove. For many months it served as his office and first Government House.  The site was a triangular area responding to the natural topography of the shoreline and the Tank Stream.

Later Governor Phillip built the first permanent Government House further up the slope of what is now Bridge Street, on the corner of Phillip Street – the present location of the Museum of Sydney.

The triangular area, gazetted in 1810 as Macquarie Place, became the first and main town square of colonial Sydney and is the oldest town square in Australia.  Governor Macquarie was responsible for its formal layout.

In 1818 Macquarie caused a sandstone obelisk to be erected in the centre of the park. The obelisk was designed by Francis Greenway who had been convicted for forgery and sentenced to death in England but whose sentence was commuted to transportation to New South Wales.  Macquarie recognised his talents and appointed him as the first Colonial Architect.  Greenway went on to provide Sydney with buildings which now are part of the city’s heritage, such as the Hyde Park Barracks, St. James Church and the Conservatorium of Music (originally the stables of Government House).  The stonemason was Edward Cureton using ashlar blocks of a fine grained white sandstone, not the mellow gold of yellowblock sandstone which is a feature of later significant colonial buildings.  No other buildings exist where this sandstone was used.

The purpose of the obelisk was to mark the place from which all public roads were to be measured as the colony expanded into New South Wales.  The places and distances inscribed on the obelisk show how small the colony was at the time – Bathurst, Windsor, Parramatta, Liverpool, South Head and the North Head of Botany Bay.  It became the “zero point” in surveying, mapping and planning the expansion of the colony. Distances were recorded on milestones or other distance markers set on the sides of the roads as they were laid out.  The traveller knew “how far he was from Sydney.”

During the 1830’s with the construction of Loftus Street Macquarie Place was reduced in size from a public square to a small park.  The obelisk is now on the corner of Loftus Street. 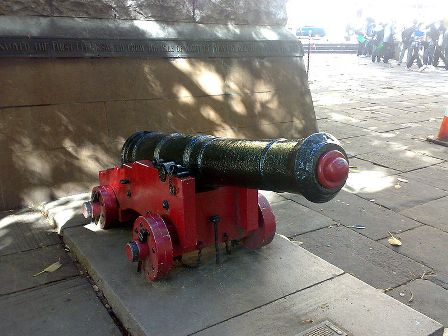 from Sirius the flagship of the first fleet, originally brought to land as part of shore defences, and the ship’s anchor salvaged after it was wrecked in 1770 on the coast of Norfolk Island were mounted in the park in 1907. A flamboyant Edwardian “public convenience” with Art Nouveau detailing, closed in 1996 and filled below ground level, has been retained above ground and restored as a heritage relic.

Top:  The Macquarie Obelisk from Wikipedia, Above: The Anchor from HMS Sirius and Cannon from HMS Sirius By Julioren. Left: Plan of underground public toilet at Macquarie Place, Contributed by City of Sydney Archives [CRS 569/P425]