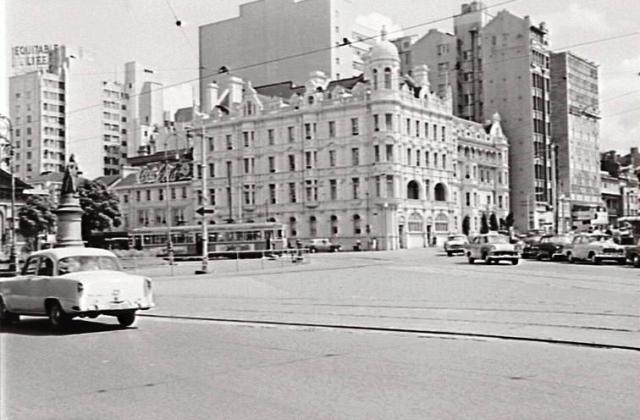 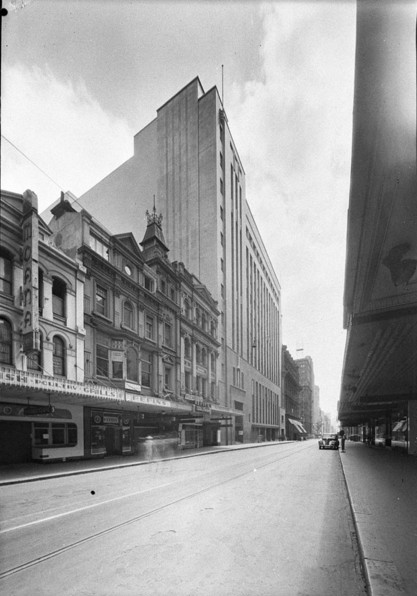 SEAFOOD IN SYDNEY
By George Repin

Long before good fish restaurants appeared in the suburbs around Sydney and the improved image of the Fish Markets attracted members of the public to go there, King Street was the place for the best seafood.

From the late 1890s to the late 1950s King Street was the virtual centre of Sydney because of the tram routes.  From Erskine Street one line ran up King Street to Queens Square then through Kings Cross, past the Stadium in Rushcutter’s Bay, through the Bay suburbs to Watson’s Bay and the Gap.  The other lines crossed King Street – along Pitt and George Streets to the inner Western Suburbs and significantly the routes along Elizabeth Street which serviced the racecourses at Randwick (now Royal Randwick), Kensington (now the campus of the University of NSW) and Rosebery (where housing estates are replacing the industrial complexes originally built on the racecourse site).

Punters ate in King Street before going to the races by tram and, if successful, returned for dinner.  In the evenings those on their way to the Stadium, either for boxing or wrestling, or to hear the international artists who performed there, such as Frank Sinatra, Johnny Ray or the Beatles, ate in King Street.  They had great choices of seafood - almost all provided by Greeks.

In the basement of the Queen’s Club building in Queen’s Square Jim Poulos ran Raynaud’s until demolition to make way for the Law Courts building forced his closure and the Queen’s Club to move to Elizabeth Street.

Gravas Café between Elizabeth and Castlereagh Streets was established by Spiro and George Gravas and their brother-in-law Spiro Andipas in 1932.  They had come from Levkas.  Spiro Andipas bought out his partners in 1945, entrusting its management to his son-in-law Leo Raftos in 1950. The closure of Gravas, when the building was demolished, was marked by a full-page tribute in The Daily Mirror with many distinguished customers recording their regret.

Stamell’s, established in 1904 by two brothers from Ithaca, the Stamells, originally at 130 King Street and later further down the street in premises previously occupied by Woodward’s Fish Café, was the oldest.  It was unique in that it had a wine licence and also because ladies, who were precluded from eating on the ground floor, were taken by lift to a private ladies dining room.  The building was demolished to make way for the MLC Building.  For a time before the demolition Peter Raftopoulos and his wife ran a restaurant there.

Victor’s Oyster Bar across the road was the only establishment not operated by a Greek although all his employees were.  Victor, who was Jewish, spoke perfect Greek.  He had escaped from Turkey when Greeks were expelled from Smyrna.  Customers stood in front of a marble bar to eat oysters shucked before their eyes by men on the other side of the counter, wearing long rubber aprons.  The wonderfully fresh oysters were served with wedges of lemon.  Victor’s lease, in the two storey building which is still there, did not allow him to fry or grill food, but he made a specialty of boiled schnapper with oyster sauce.  After Victor died in 1950 his son-in-law continued in the business.

Turning the corner north into Pitt Street there were two later comers – Fernandez on the east side and the Moana on the west side.

The displays of fresh fish attractively set out on crushed ice were features of the cafes on ground floor street frontages.  Live prawns caught overnight in the Parramatta River and the then famous King Prawns from Rose Bay were delivered daily by Italian fishermen.  Plump oysters came from wherever they were best along the NSW coast depending on the season. The short lines of supply guaranteed absolute freshness.

Who were the regular customers?  They were barristers, judges and solicitors because of the proximity of Phillip Street and the law courts, actors from the Theatre Royal and the Phillip Street Theatre, journalists from the Sun Newspaper just around the corner in Elizabeth Street, staff from David Jones and many others working in the city.

Leo Raftos, for whose recollections and assistance in the preparation of this article I am very grateful, reminisced about some of his customers who included well-known names such as Mr Justice Dovey, Lionel Murphy, Bob Dyer, Jill Perriman, Bill Orr the producer and Sir John Kerr who had his last fish meal in Sydney at Gravas´ before moving to Yarralumla.  He particularly remembers the pleasure of sitting down to chat with John Gielgud (later Sir John) who regularly came in for his favourite, John Dory, when appearing at the Theatre Royal.

It all changed when the trams were removed, parking in the city became increasingly difficult, real estate development replaced old buildings with modern high rise office blocks in which fish cafes could not afford ground floor street frontage rentals, and quality restaurants and fish cafes were opened in the suburbs.

The King Street Greek fish cafes disappeared but many descendants of their proprietors have gone on to contribute in the Australian community as lawyers, doctors and in other professions.