EPHESUS – THE LIBRARY OF CELSUS 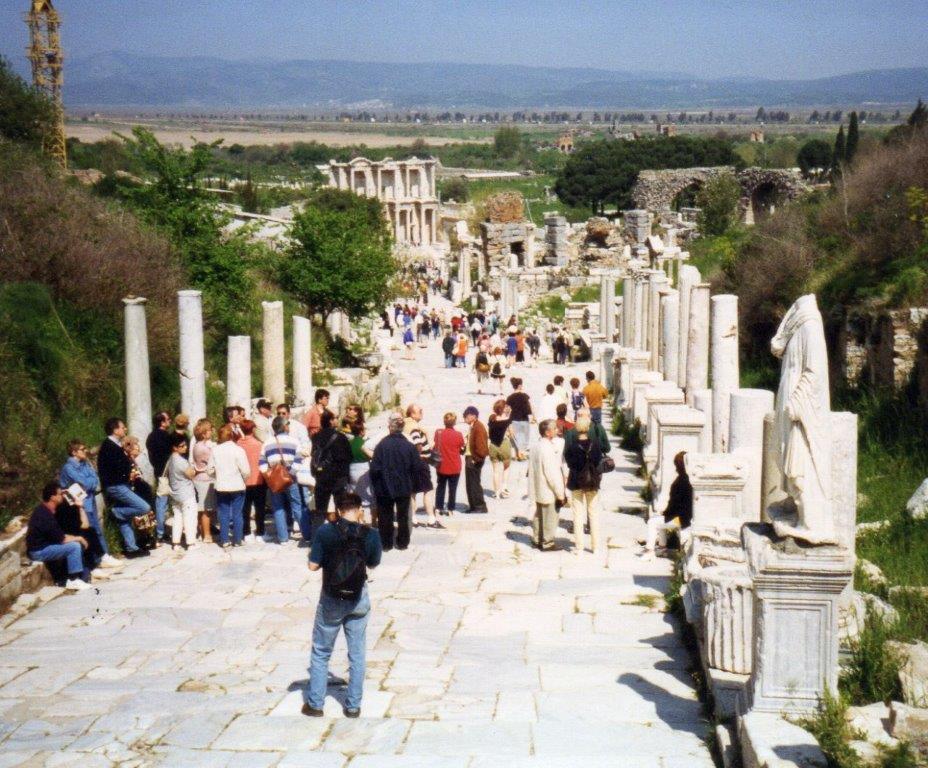 View from the Gate of Hercules down the Street of Curetes to the Library of Celsus.

EPHESUS – THE LIBRARY OF CELSUS
By George Repin

Probably the most visited tourist destination in Turkey, Ephesus receives tens of thousands of visitors each year.  They come by land and in cruise ships.  Those who arrive by land usually have sufficient time on the site to explore, and to absorb something of the atmosphere of the Roman ruins, which are being progressively restored.  On the other hand cruise passengers are delivered from their ships in large numbers, shepherded in crowds, rapidly, through the ruins and then herded back into coaches for the return to their ships.  Few of them are left with any real understanding of what they have seen.

Ephesus is on the coast of Ionia 3 kms. south-west of present day Selçuk in the Izmir Province of Turkey.  Although the area is known to have been inhabited in the Neolithic Age (6000 BCE) and the Bronze Age (14th and 15th Centuries BCE) historic Ephesus was established following the Attic and Ionian Greek migrations in the 10th Century BCE.  However, it was only after it came under the control of the Roman Republic in 129 BCE that Ephesus flourished and, when Augustus became emperor in 27 BCE,  it entered an era of prosperity, becoming both the seat of the governor and a major commercial centre.

It was famous for the Temple of Artemis, the Library of Celsus and a theatre with capacity for 25,000 spectators.  It had one of the most advanced systems of aqueducts in the ancient world.

When Constantine rebuilt much of the city after its destruction in 263 CE by the Goths Ephesus became the most important city, after Constantinople, of the Byzantine Empire in Asia but subsequently suffered from disasters including earthquakes, sackings by Arabs and troubles under the Ottomans.   It was completely abandoned by the 15th Century CE.

This article is devoted to the outstanding structure of the Roman period – the Library of Celsus.  Ephesus as a whole will be the subject of the next article in REFLECTIONS.

The Library of Celsus was one of the most beautiful structures in Ephesus and an example of an ancient Roman-style library in what was traditionally Greek territory.  Its construction began in 117 CE and was completed in 120 CE.  It was built in honour of Gaius Julius Celsus Polemaeanus who, as a native of nearby Sardis, was one of the earliest men of purely Greek origin to become a Consul of the Roman Empire (23 CE) and Governor of Asia (105 CE).  He was a wealthy and popular citizen and paid for the construction of the library with his personal wealth. 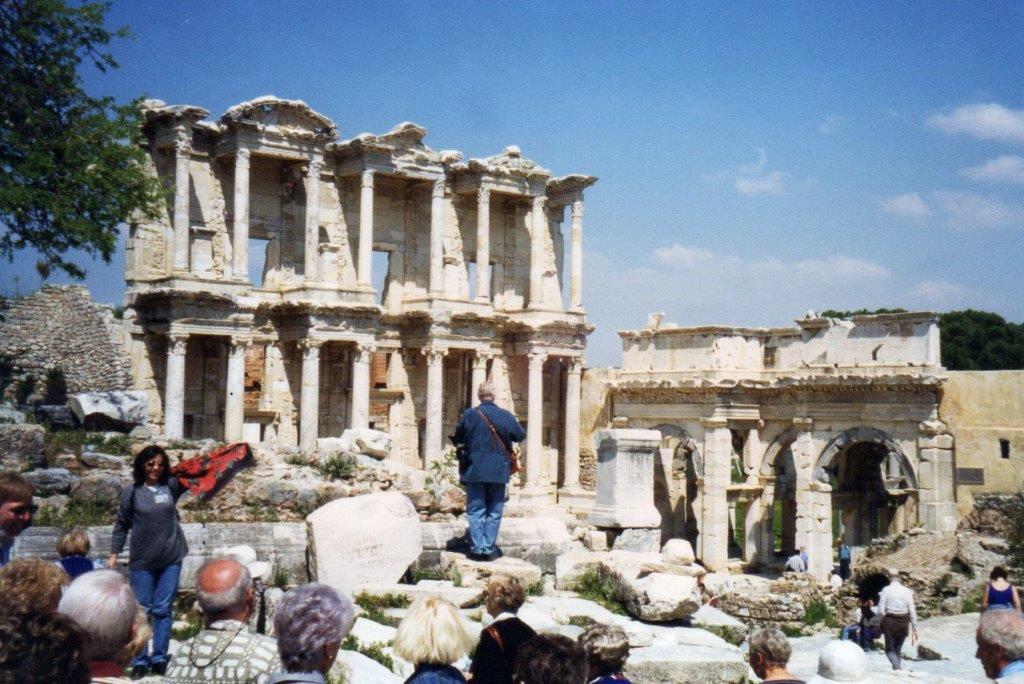 Facade of Library of Celsus undergoing restoration (1997).  Market Gate on the Right

The building had a single hall facing east built on a platform of nine steps the full length of the building and a facade of two stories with Corinthian style columns on the ground floor, with statues in the niches formed by the columns.  The statues symbolized wisdom (Sophia), knowledge (Episteme), intelligence (Ennola) and valor (Arete). 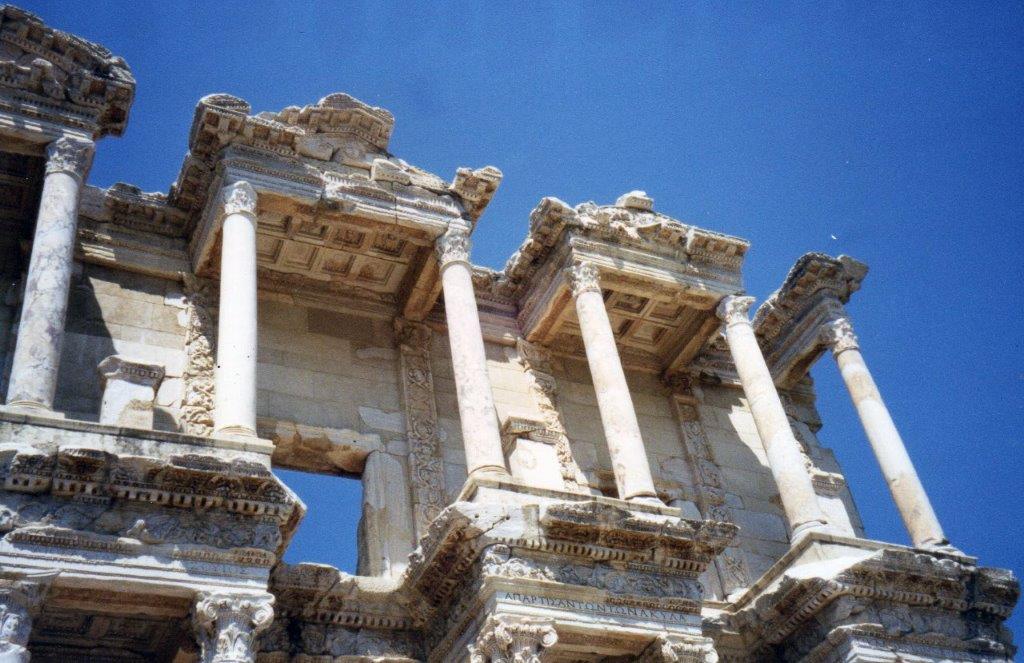 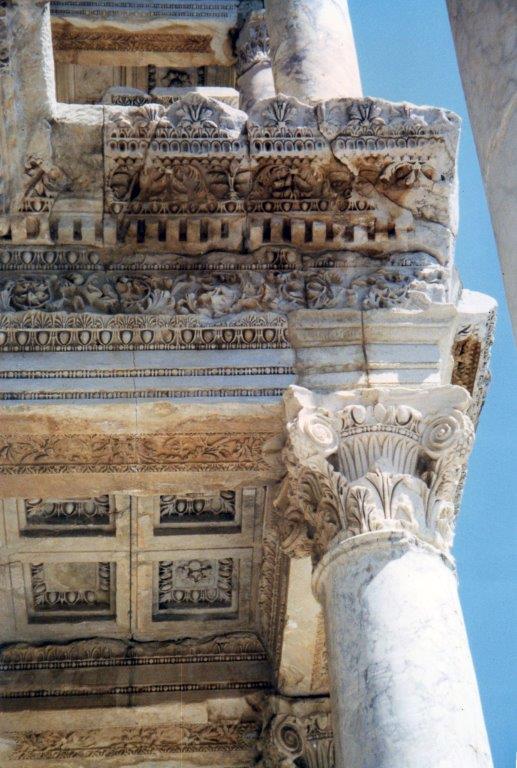 Statue of Sophia. One of the statues on the façade.

A crypt holding Celsus’ sarcophagus and a monument to him lay in a vaulted chamber under the main entrance.

12,000 scrolls were held in cupboards and on shelves in rectangular recesses on three sides of the building.

The interior of the library and all the scrolls were destroyed by fire in 262 or 263 CE  variously attributed to the aftermath of an earthquake (262 CE) or destruction of the city by Goths (263 CE).  The facade, which had survived, was completely destroyed by a later earthquake in the 11th or 12th Century CE.

Following excavations in 1903-1904 by the Austrian Archaelogical Institute the four statues from the facade were taken to the Ephesus Museum in Vienna.  When the facade was later rebuilt they were replaced by copies.  Only the façade has been rebuilt.  The rest of the building remains in ruins. 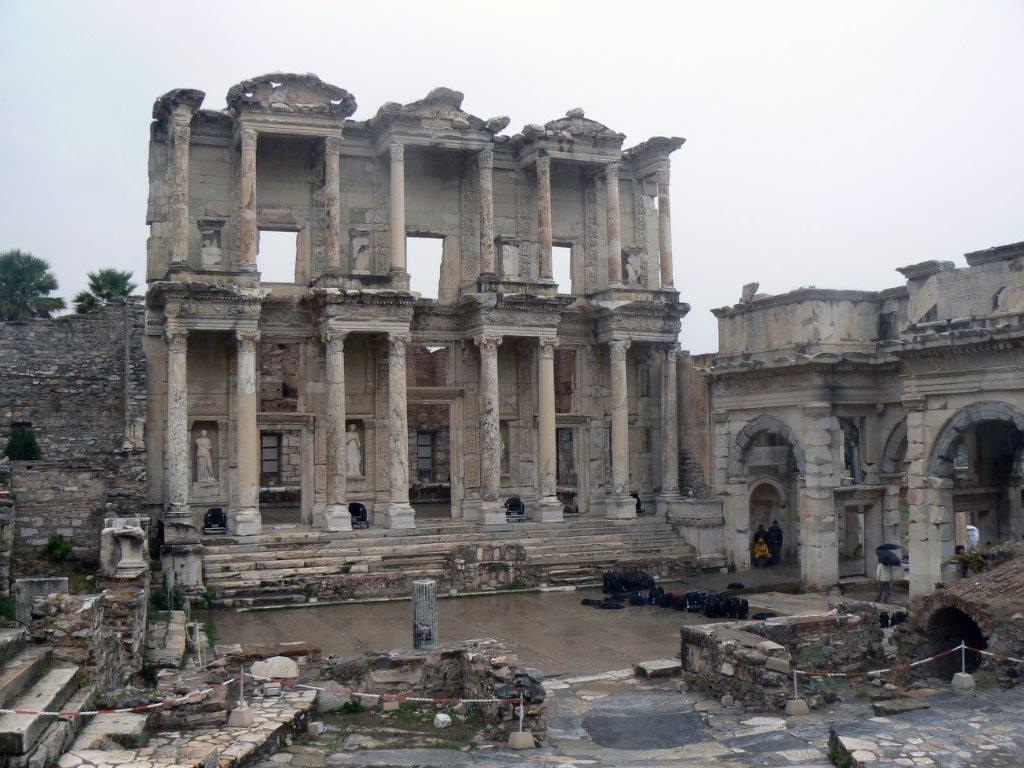 Later stage in restoration of the Library of Celsus (2006). Statues on façade visible.