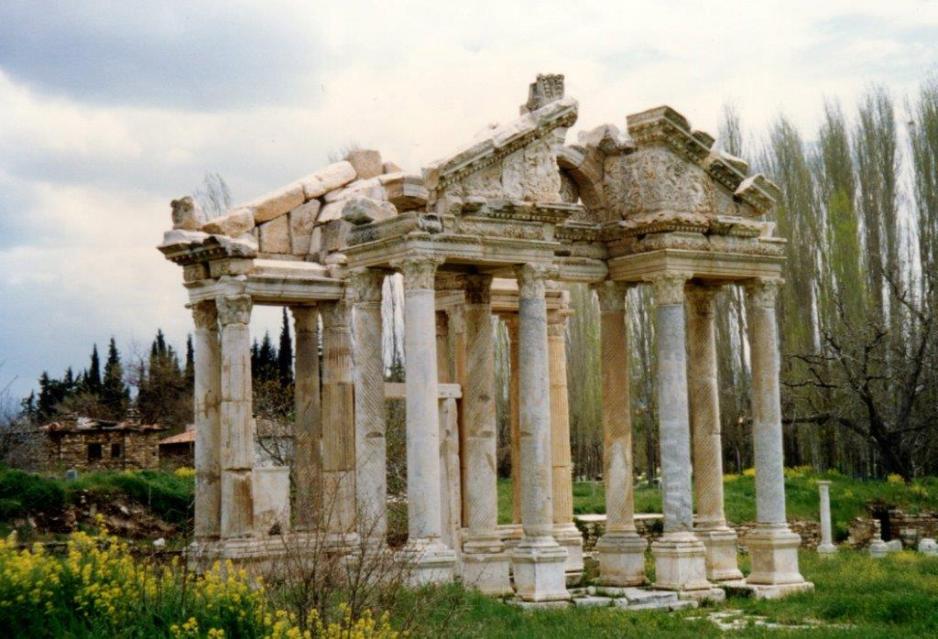 Aphrodisias is located in the province of Aydin, Turkey at the site of the village of Geyre, on a plateau 600 metres above sea level.  It is 230 kms. from Izmir.

Evidence of human occupation as early as the late Neolithic period exists, and the area developed through the Bronze and Iron ages. The city, Aphrodisias was founded in the 5th Century BCE and flourished under the Roman Empire, being the capital of the Roman Province of Caria.  The name of the city has the same root as aphrodisiac – both words deriving from the Greek name for the goddess of loveAphrodite. 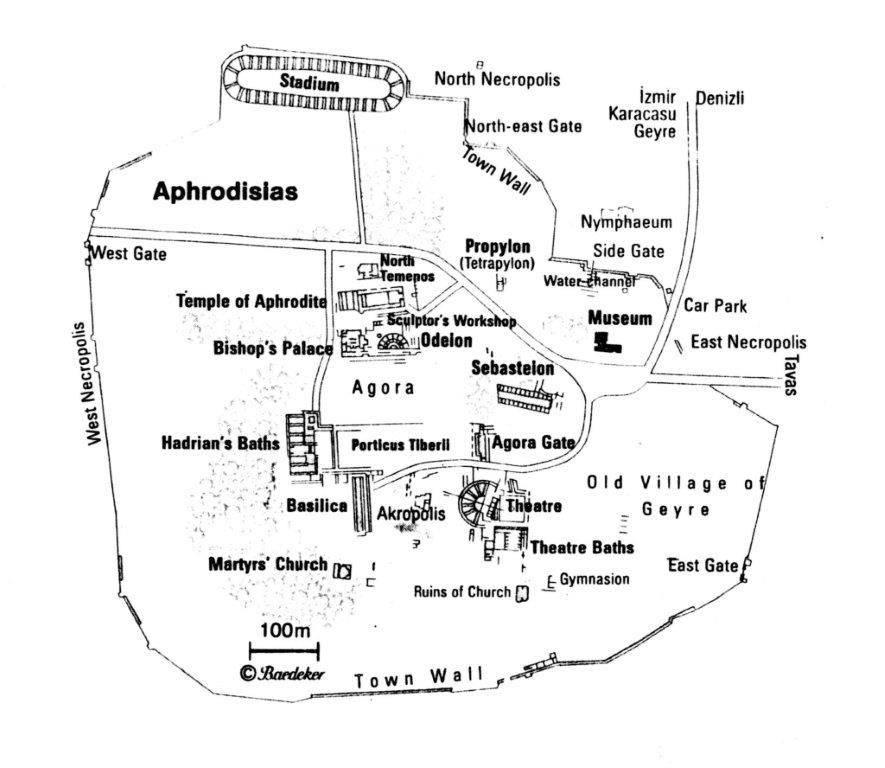 Under the Byzantines the city was renamed Stavropolis – City of the Cross – to erase the pagan goddess of love from people’s minds. The Temple of Aphrodite was converted to a Christian Church and the city changed totally.  In the middle ages it was a cathedral town but it was abandoned in the 12th or 13th Century.

Aphrodisias was renowned as a school of sculpture and sculptors from other areas came to the city for annual sculpture competitions. Statues were carved from the local white, greyish blue Carian marble. The eyes of statues found on the site are full of expression and vitality and the bodies give the impression of being able to move. Public monuments were decorated with “peopled scrolls”.  Many examples of statuary located in excavations are now in the nearby Aphrodisias Museum.

Over time, after Aphrodisias was abandoned, the village of Geyre grew up on the site but itself was abandoned and moved nearby after it was destroyed by an earthquake in 1956.

In 1958 a journalist, visiting a house in Geyre found beautiful pieces of marble under a table and, on questioning the occupants, was told that they came from the site of the old village.  His discovery led to the recognition that excavations might disclose the ruins of Aphrodisias.  Systematic excavations began in 1961, directed by a Turkish archaeologist, Professor Kenan Erin, under the auspices of New York University. From 1961 to 1990 the work yielded a wealth of art treasures.

Professor Erin wrote: “Imagine coming upon a city of antiquity so rich in archeological treasure that choice sculptures roll off the sides of ditches, tumble from old walls, and lie jam-packed among colonnaded ruins”.

Professor Erin, who devoted his life to the project, is regarded by many as the “father of Aphrodisias”.  He is buried near the Tetrapylon.

Significant features of Aphrodisias include:

The Tetrapylon (Propylon) – a monumental gateway built in the 2nd Century CE at an intersection where a sacred way led to the Temple of Aphrodite. It had four rows of four columns.

Ruins of the Temple of Aphrodite – from the late Hellenistic period – originally Ionic with 40 columns.

The Stadium – built in the 1st Century CE – the best preserved in Anatolia. It is 262m. long and 59m. wide with a capacity of 30,000 spectators in 22 rows of seats. It was used for sporting, musical and dramatic events.

The Theatre – built in the late Hellenistic period around 100 BCE and modified at the end of the 2nd Century CE – with a seating capacity of 10,000 people.

The Odeon (a concert hall) – a semi-circular building with 12 tiered rows of seats with a capacity of 1,700. At one time it had more seats and was roofed.

The Baths of Hadrian – built under Hadrian in the 2nd Century CE.

The Portico of Tiberius – whose Ionic colonnade has been partially restored.

The Sebastelon - 1st Century CE – a courtyard with two parallel three storied porticos on each side where the Emperor is believed to have been worshipped.

The Aphrodisias Museum – displaying an impressive collection of items discovered in the course of excavations.

Photographs by George Repin in 1997 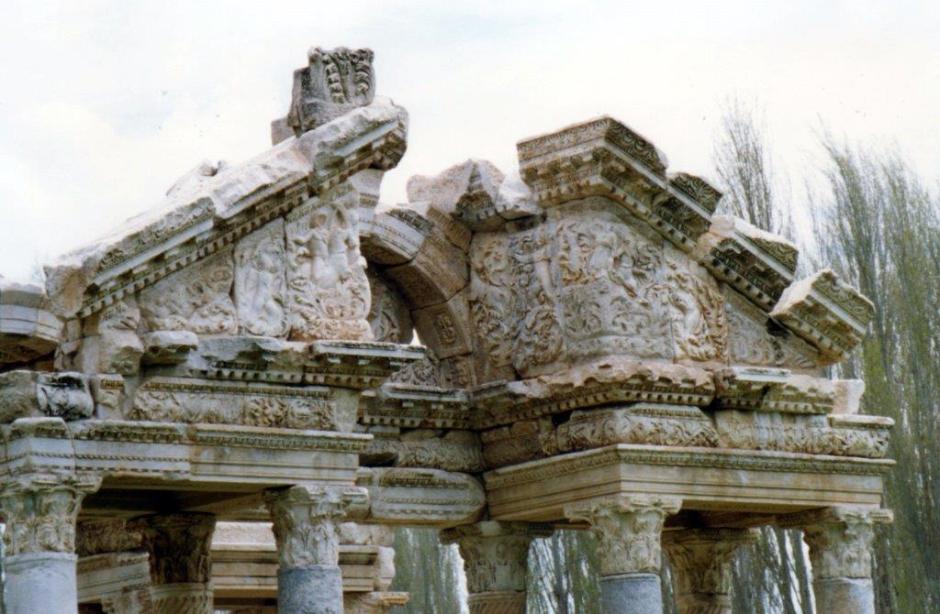 Detail of carving on the Tetrapylon. 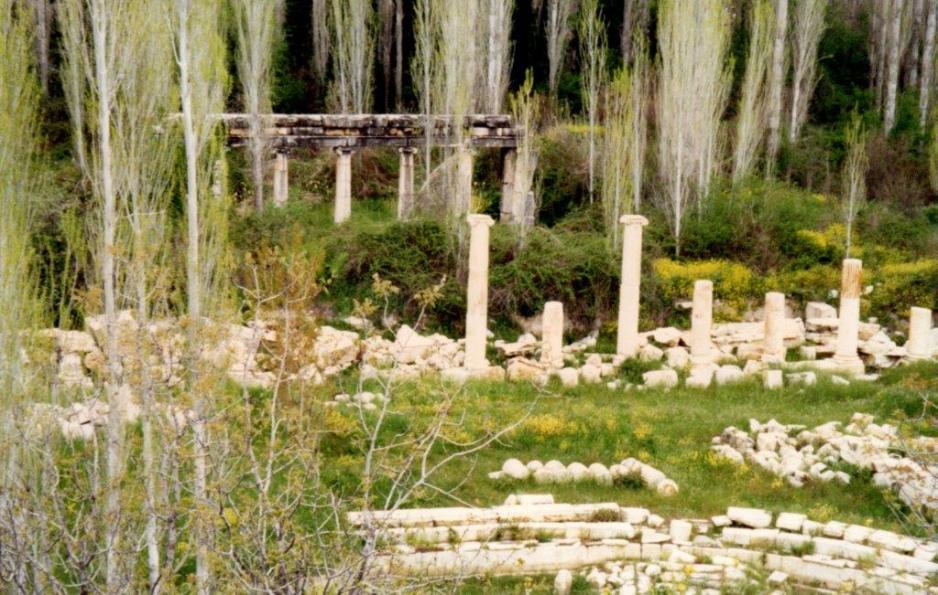 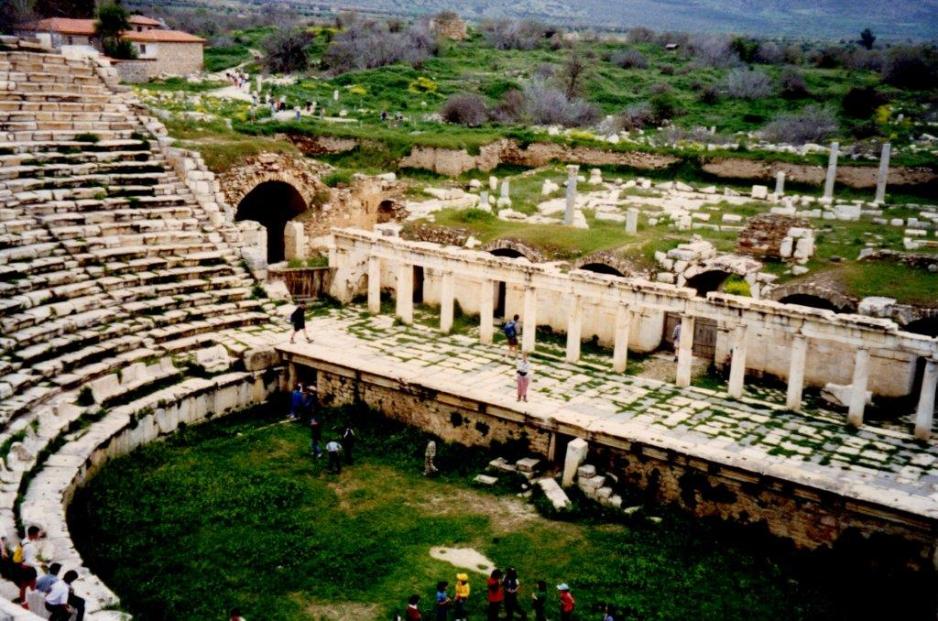 Part of the stage and seating in the Theatre. 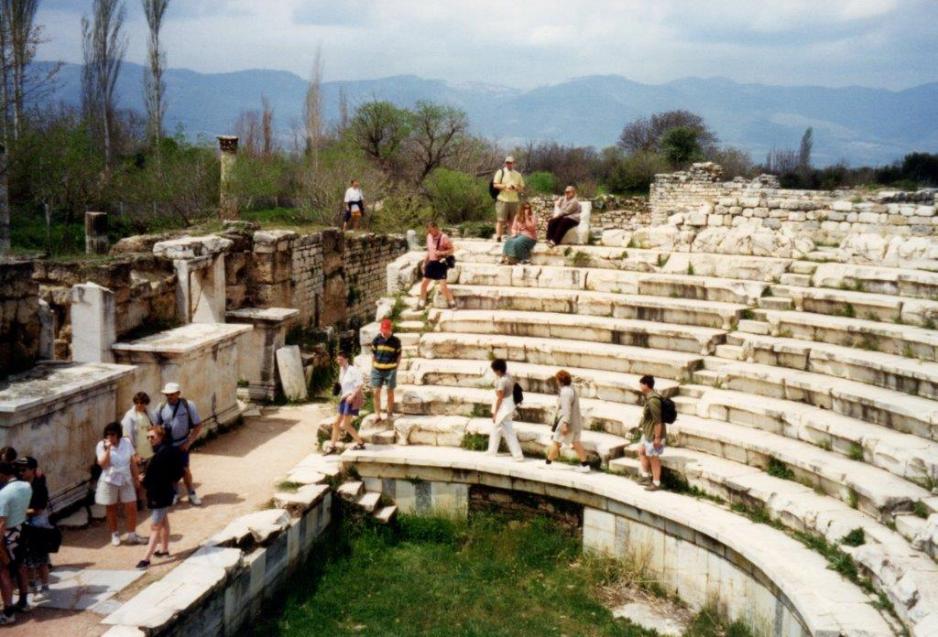 Part of the stage and seating in the Odeon. 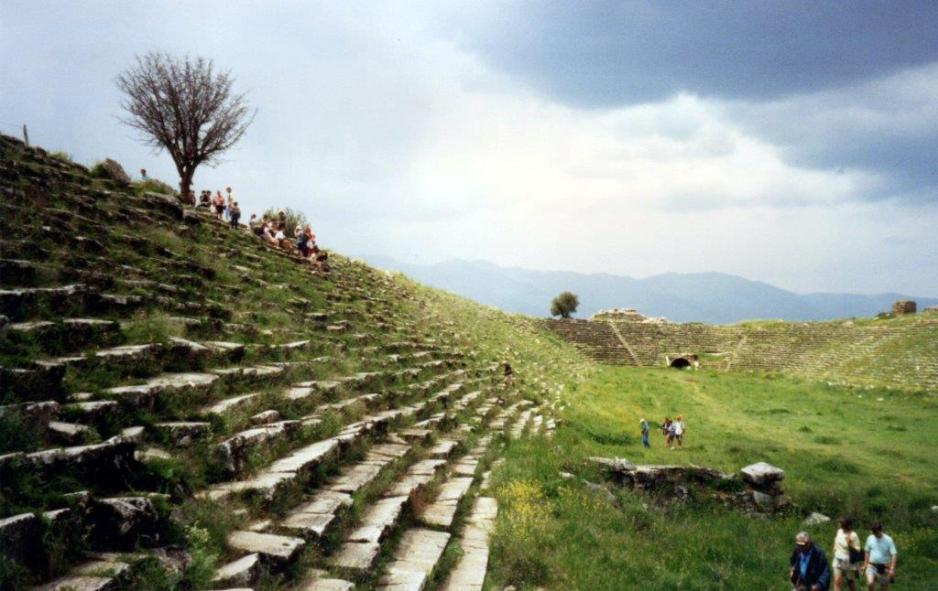 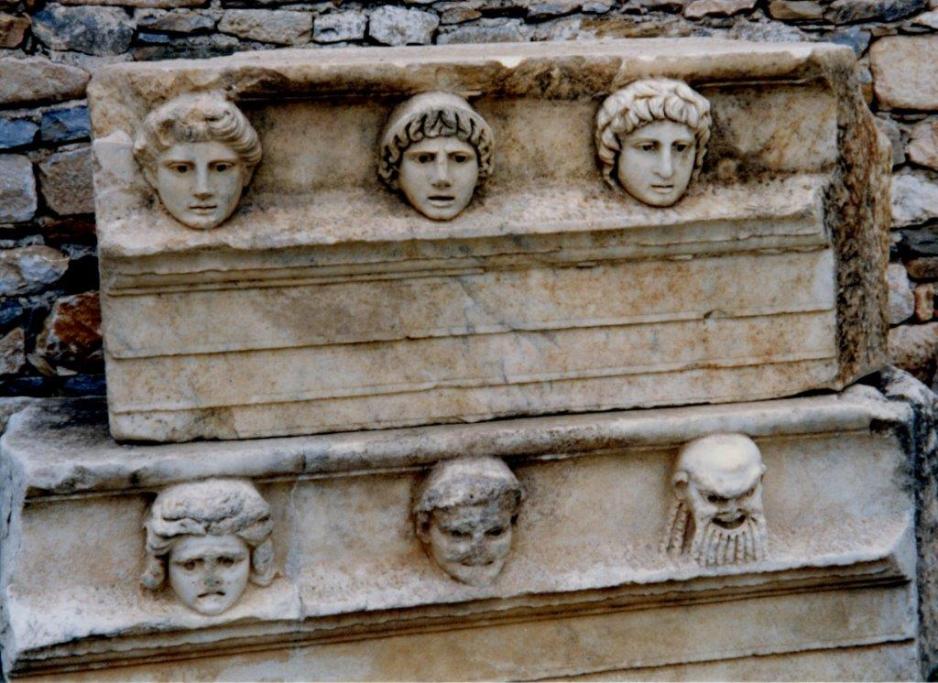 An exhibit in the Aphrodisias Museum.

The Nineteen Thirties  Remembering Rowe Street  The Sydney Push  Saturday Night at the Movies  Shooting Through Like A Bondi Tram  A Stop On The Road To Canberra  City Department Stores - Gone and Mostly Forgotten  An Australian Icon - thanks to Billy Hughes  Crossing The Pacific in the 1930s  Hill End  The Paragon at Katoomba  Seafood In Sydney  How Far From Sydney?  Cockatoo Island Over The Years  The Seagull at the Melbourne Festival in 1991  Busby's Bore  The Trocadero In Sydney  Cahill's restaurants  Medical Pioneers in Australian Wine Making  Pedal Power and the Royal Flying Doctor Service  Pambula and the Charles Darwin Connection  Gloucester and the Barrington Tops  A Millenium Apart  Have You Stopped to Look?  Gulgong  Il Porcellino Olympia  Durham Hall  Sargent's Tea Rooms Pie Shops and Street Photographers The Ballet Russes and Their Friends in Australia  Hotels at Bondi  Alma Ata Conference - 1978 Keukenhof - 1954 The Lands Department Building and Yellowblock Sandstone  The Goroka Show - 1958  A Gem On The Quay  Staffa  The Matson Line and Keepsake Menus Kokeshi Dolls  The Coal Mine At Balmain  The Hyde Park Barracks  The Changing Faces Of Sydney From Pounds and Pence to Dollars and Cents Nell Tritton and Alexander Kerensky  Making A Difference In Ethiopia William Balmain  J C Bendrodt and Princes Restaurant Azzalin Orlando Romano and Romano's Restaurant  Waldheim  Alcohol in Restaurants Before 1955  King Island Kelp  The Mercury Theatre  Around Angkor - 1963  Angkor Wat 1963  Costumes From the Ballets Russe Clifton at Kirribilli  Chairman Mao's Personal Physician  The Toby Tavern The MoKa at Kings Cross The Oceaographic  Museum in Monaco  The Island of Elba Russian Fairy Tale Plates Meteora Souda Bay War Cemetery Barrow, Alaska Cloisonné Tripitaka Koreana Minshuku The Third Man Photographs and Memories Not A Chagall! Did You Listen? Did You Ask?Napier (Ahuriri, Maori) New Zealand Borobudur  Ggantija Temples Plumes and Pearlshells Murano  University of Padua Ancient Puebloe Peoples - The Anasazi  Pula  The Gondolas of Venice Cinque Terre  Visiting the Iban David The Living Desert Bryce Canyon National Park