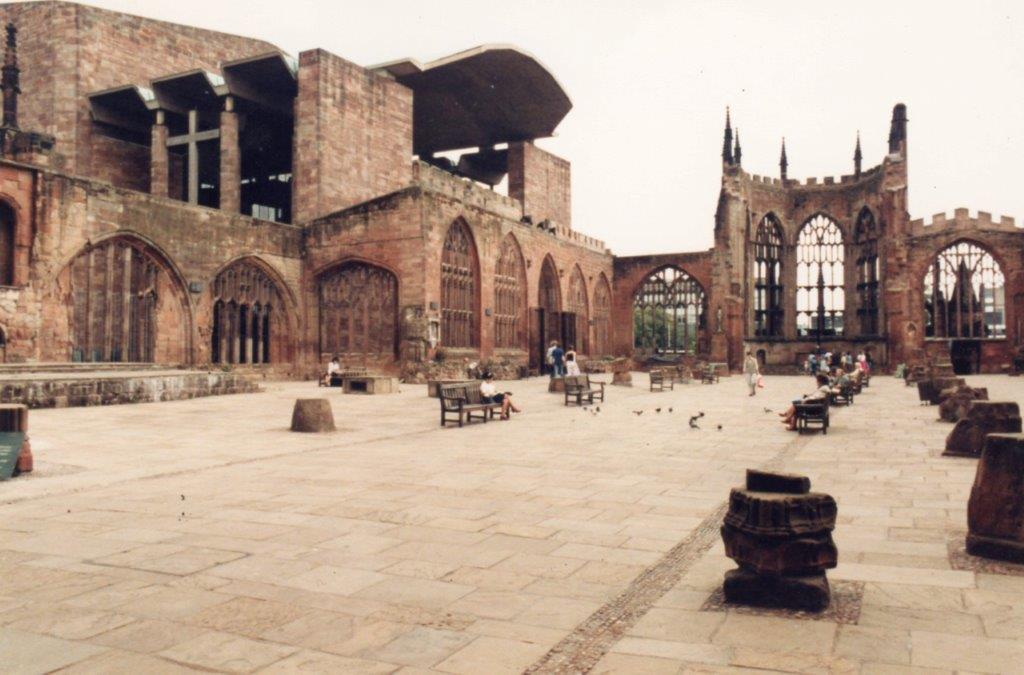 The shell of the destroyed cathedral with the new Coventry Cathedral on the left.  Photograph by George Repin in 1982.

By George Repin
During the night of Thursday, 14th November, 1940, the city of Coventry suffered the longest air-raid of any one night, on any British city, during World War II.  The city was targeted by the Luftwaffe probably because of the high concentration of factories in the area producing armaments, munitions, aircraft and aero-engines which were vital to the British war effort.  However it has been suggested that Hitler ordered the attack as revenge for the bombing of Munich by the RAF six days earlier, on advice he was given that the city’s medieval heart was one of the finest in Britain. 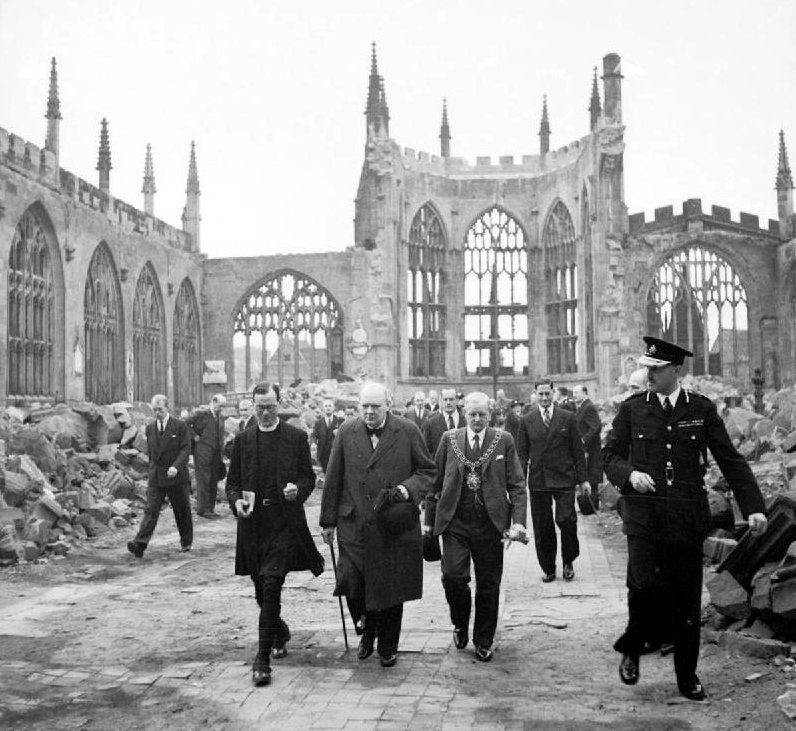 The Prime Minister, Winston Churchill, in the shell of Coventry Cathedral in September 1941.  From Wikipedia.
Huge firestorms devastated most of the city centre and the majority of Coventry’s historic buildings could not be saved.
In the one night three quarters of the city’s industrial plants were destroyed, an estimated 568 people were killed (this figure was never precisely confirmed) with another 863 badly injured, 393 sustained lesser injuries and thousands were rendered homeless.
The firestorm illuminated the city to the extent that German aircraft could fly back to their base in northern France, refuel, rearm and fly back to drop bombs on dark areas so far not affected by the bombing.
The cathedral was destroyed, not by high explosives, but by the fire bombs, so that the outer walls and the tower and spire remained intact, but the wooden roof, the heavy oak ceiling, the pews, the floor and the screen were completely lost. 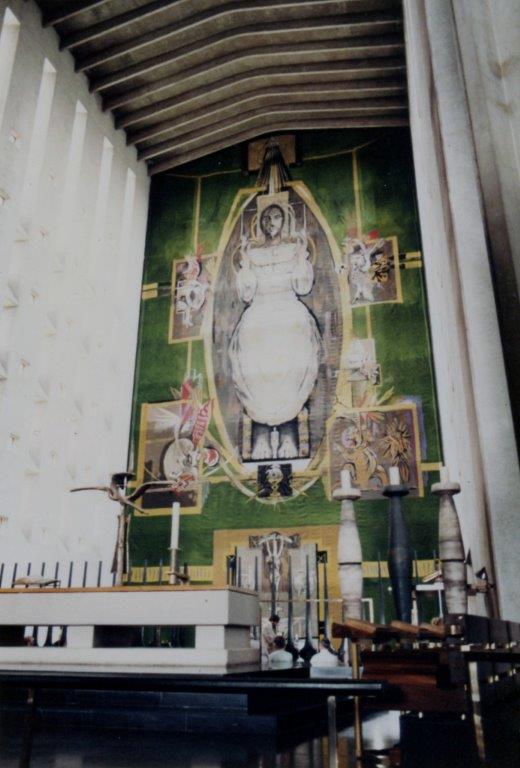 The tapestry (74 ft. high and 38ft. wide) replacing the traditional east window.  It depicts Christ in Glory with "Man" between his feet.  The high altar is made of hammered concrete. Photograph by George Repin n 1982.
Two precious relics grew out of the destruction - The Charred Cross and The Cross of Nails.  The cathedral stonemason saw two wooden beams, charred but still solid, lying in the shape of a cross, tied them together with wire and set them up at the east end of the ruins. A replica now stands in the sanctuary of the ruins with The Cross of Nails.  The original is now kept safely in another place. The Cross of Nails was made of three 14th Century hand-forged nails which fell to the floor when the roof burned.  This cross has become the symbol of Coventry Cathedral’s Ministry of International Reconciliation. Over 330 crosses made of nails from the ruins are in many Centres throughout the world. 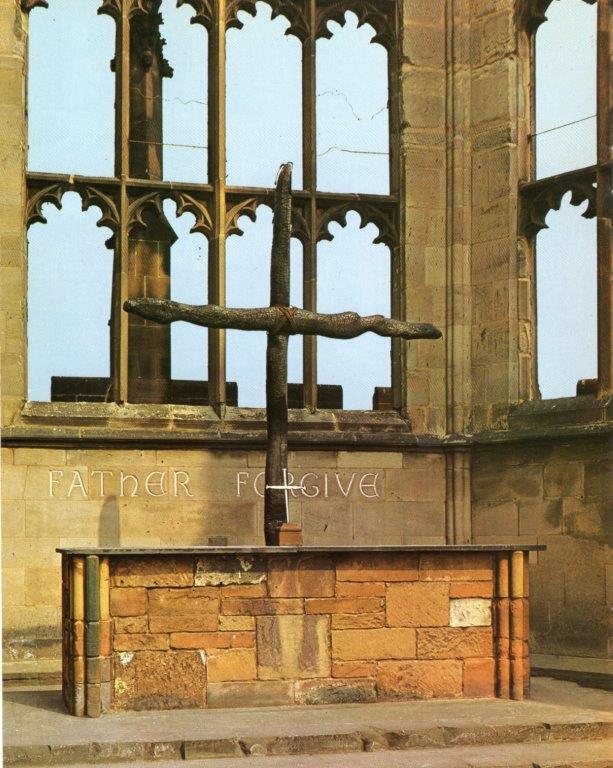 The Charred Cross and the Cross of Nails in the sanctuary of the ruins.  Pitkin Pictorials 1971. 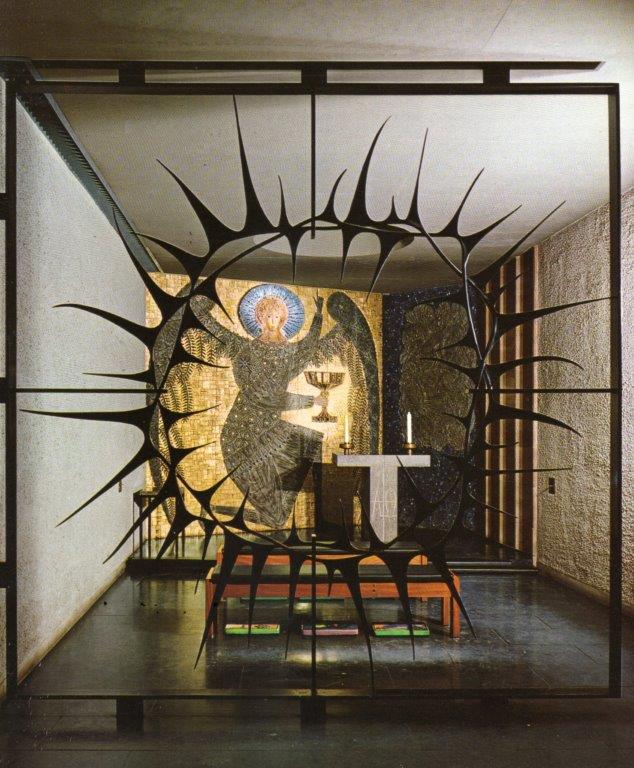 The interior of the Chapel of Christ the Servant, with its Cross and Crown of Thorns.  Pitkin Pictorials 1971.
The decision to rebuild the cathedral was made on the day following the destruction of the old church but it was sixteen years before the foundation stone was laid.
In 1950 a competition was held to find an architect for the new Coventry Cathedral. The design submitted by Basil Spence and Arup was chosen from over two hundred entries. Spence, who was later knighted, insisted that instead of rebuilding the old cathedral it should be kept in ruins as a garden of remembrance and that the new cathedral should be built alongside, the two buildings together effectively forming one church.
The foundation stone was laid by Queen Elizabeth II on 23 March 1956. The 24 metre tall unconventional steel spire was lowered onto the flat roof by helicopter. The modernist design for the cathedral was the subject of much discussion and debate but, on opening to the public, became hugely popular.
When the resurgence of the cathedral became known gifts arrived from all over the world and large sums of money came from benefactors in Coventry to provide some of the great artistic features of the building.
Three illustrations accompanying this article, appearing in Coventry Cathedral published by Pitkin Pictorials Ltd (SBN 85372 101 7)
© Pitkin Pictorials 1971 (Photographs by Gerald Newbery, FIIP, FRPS,) give some idea of the beautiful features of Coventry Cathedral. 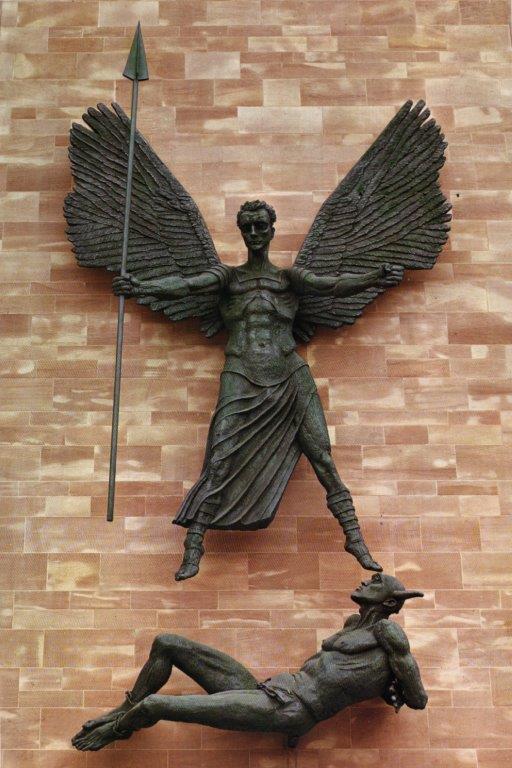