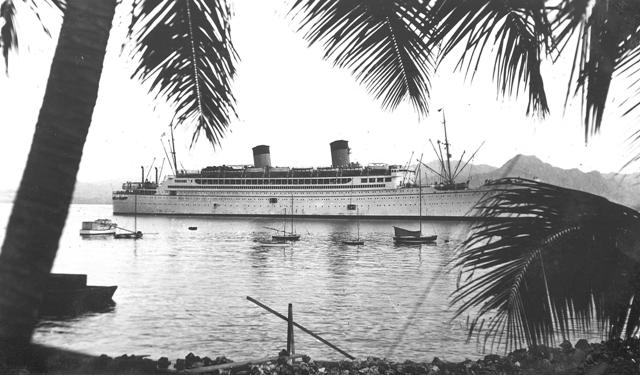 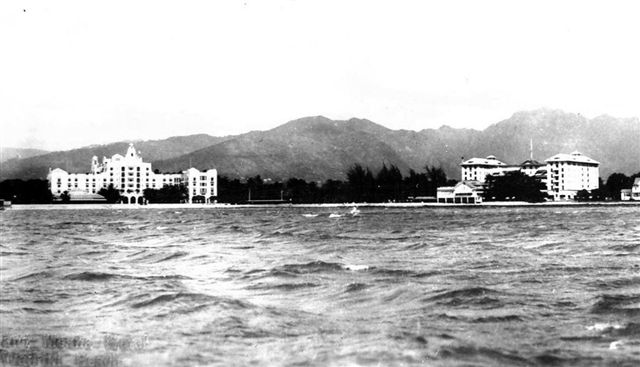 Top: “SS Monterey in Suva”. Above:  “Waikiki Beach with The Royal Hawaiian Hotel on the left and the Moana Hotel on the right” Below: . “Basic holiday accommodation in Prince Edward Street, Honolulu”. Photographs by Ivan Repin in November, 1938. In Text (right): This photograph shows the departure of the 'MV Orontes' from Station Pier, 1952. When the 'Orontes' departed, the photographer's family farewelled their friend Mr Harry McCrea with streamers from Station Pier. Traditionally, the person on board the ship would throw a roll of streamers overboard to the people below. As the ship moved away from the pier, both sides would hold on to the streamers for as long as they could until they broke.
Acknowledgement: Contributed by Mr David Meale. Courtesy Museum of Victoria. 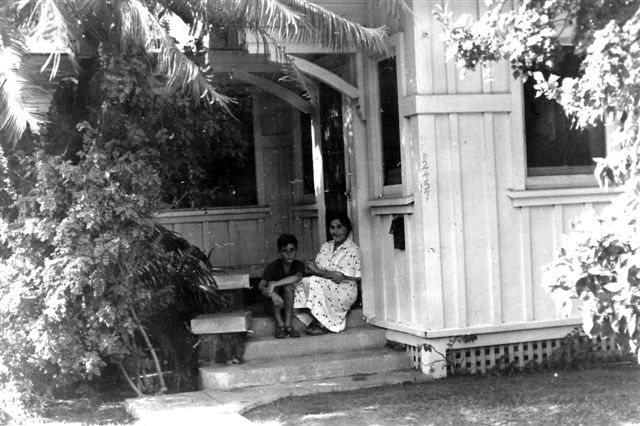 CROSSING THE PACIFIC IN THE 1930’S
by George Repin 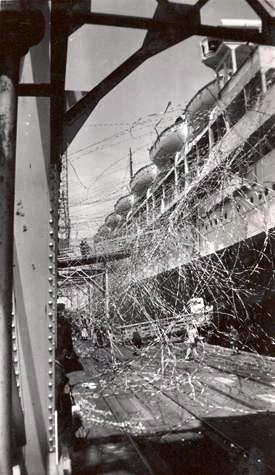 In the 1930’s visiting the United States involved a sea voyage - the best way to go being with the Matson Line.  Two sleek white passenger liners, the Mariposa and the Monterey, followed a regular schedule.  Leaving Sydney was a celebration.  After the call “All ashore who’s going ashore” visitors crowded the wharf at the ship’s side waving to departing passengers and catching rolls of paper streamers thrown down by their friends.  Gradually the streamers unwound as the ship moved away and the colourful link between the ship and shore slowly fell, as streamer after streamer broke.   When the last was gone the ship headed out the Heads, its first stop Auckland NZ.

First Class passengers enjoyed every luxury with the meal menus offering abundant variety to satisfy every taste.  The menus were printed on five brilliantly coloured covers each depicting a stylised Hawaiian scene.  They later became collectors’ items and in the 1980’s could be found in expensive stores in Honolulu, effectively framed as decorator items. A full range of courses from Appetisers to Cheese and Coffee was on offer.  Specials such Breast of Aylesbury Duckling Marengo with Fried Sweet Potatoes were there to tempt.

At each port where the ships stopped to refuel and re-provision passengers could go ashore for the day.  In Auckland they might go for a harbour cruise, climb One Tree Hill, visit the Memorial Museum, Albert Park or the Racecourse – or just wander around the town.  In Suva they could hire a car with an Indian driver to tour Viti Levu visiting native villages and markets and enjoying the scenery.   Pago Pago in American Samoa provided the opportunity to wander on the beach under the coconut trees and buy woven baskets and other artefacts at the native markets.  Finally, after twelve days, the ship berthed at Honolulu where many passengers disembarked as their final holiday destination or merely to break their journey.

The Hawaiian Islands, although a Territory of the USA since 1900, did not become the 50th State until 1959.   Honolulu was largely undeveloped.  On Kilakaua Avenue, where today hotels stand cheek-by-jowl along Waikiki Beach, there were only two – the Royal Hawaiian and the Moana.  On the other side of the Avenue, stretching inland from the shops, were simple self-service holiday cottages, within easy walking distance of Waikiki Beach, available to rent at reasonable prices.

For those for whom Honolulu was not the final destination more vessels were available to continue their journey to California, including the Matsonia. The Hawaiian Islands were already becoming a popular holiday destination for Americans.  Reaching the West Coast of the USA passengers disembarked in either Los Angeles or San Francisco..

The Matson Line link between Australia and the West Coast of the USA ended with the war in the Pacific.  It was not long before mass air travel put an end to the luxury liner as the means of getting from one place to another and the era of popular cruising had not yet arrived.