On September 8, 1940 a seventeen year old youth, Marcel Ravidat, walking with his dog, came upon a subsidence caused by the uprooting of a large tree on a hillside above Montignac.  Looking more closely he discovered what proved to be the entrance to a cave complex, now known as Lascaux.  Returning a few days later with three friends he brought with him an oil lamp and a knife to clear the entrance.  The young men slithered down a cone of rubble into what is now known as the Bulls’ Chamber and, in what is now known as theAxial Gallery, a further twenty yards further on, the first paintings on the walls were seen in the light of the smoky oil lamp.

Montignac is in Périgord in the Department of Dordogne, South Western France – an area where there are thousands of caves.  Some of the larger caves were decorated by prehistoric man from the Gravettian (c. 25,000 years ago) until the end of the Magdalenian period some 10,000 years ago.

Lascaux is a complex of caves richly decorated with Paleolithic paintings estimated to be 17,000 years old.  Cro-Magnon man chose Lascaux probably because it is one of the largest caves in the area and its walls the most suitable for painting and mural art.

The walls are decorated to a large extent with images of large animals, most of which are known from fossil evidence to have lived in the area at the time.  Bulls, equines and stags are depicted in the most famous section – the Bulls’ Chamber. 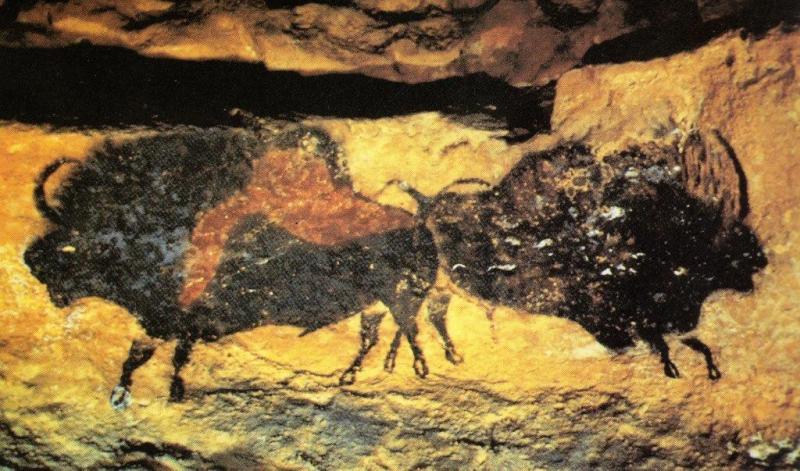 Above: Back to back bull bisons in the Nave.

Most of the major images were painted using mineral pigments with some of the designs incised into the stone. 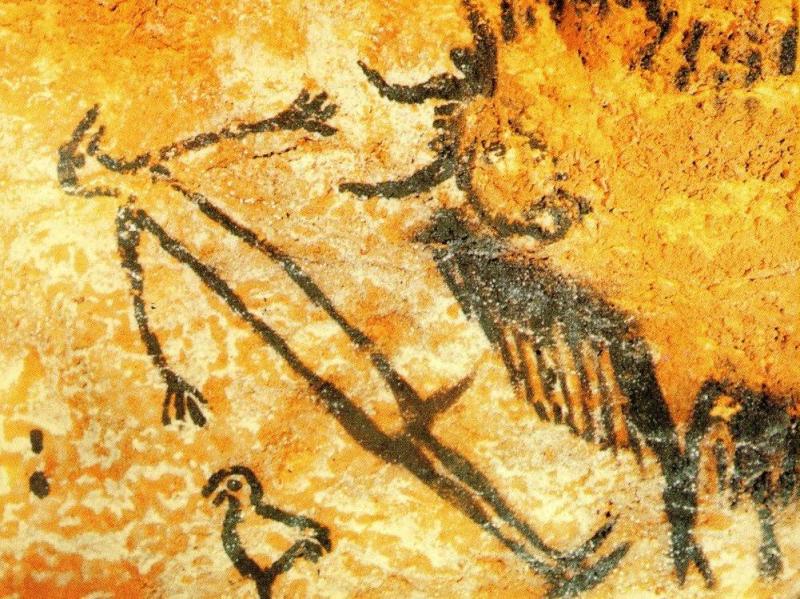 Above: From drawings in the Pit. A male figure, a bird and a bull's head.

The cave was opened to the public in 1948.  Unfortunately, by 1955 the impact of 1200 visitors per day, the presence of illumination and changes in air circulation introduced lichens on the walls and produced such visible damage that public access was stopped in 1963. 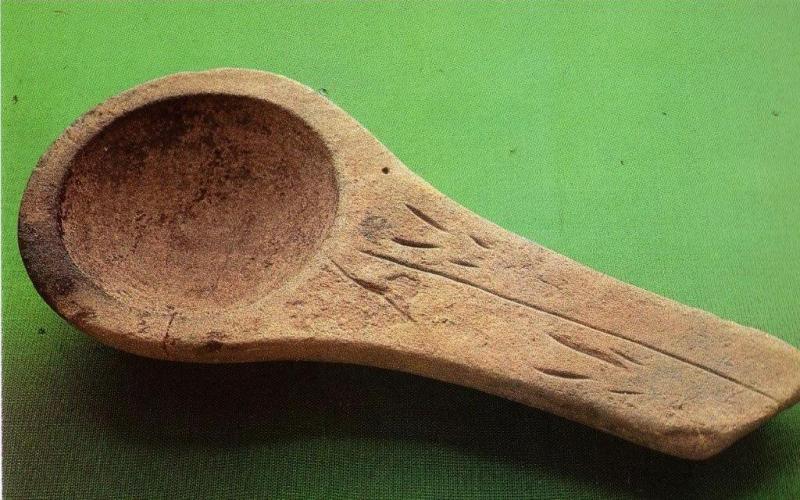 Above: A pink sandstone lamp (9 inches long) which worked like an oil lamp. The wick has left sooty deposits proved to be of juniper.

Despite the closure of the cave problems of damage due to fungus have continued.  In 2008 the growth of black mould was found and the cave was completely closed, even to scientists and preservationists.  Now only a few scientific experts are allowed to work in the cave and only for a few days a month.  Efforts to remove the mould have left dark patches and damaged pigments on the walls.

The community interest generated by the discovery of the prehistoric masterpieces in the cave led to a decision to build Lascaux II to allow visitors to see a faithful replica of part of the cave.

Lascaux II, opened in 1983, is located 200 metres away, buried on the same hill as the original cave.  It faithfully and meticulously reproduces 90% of the original paintings in the Bulls’ Chamber and the Painted Gallery using the same techniques and the same natural pigments as the prehistoric artists. It was a technological feat applying great scientific and artistic rigour to recreate the atmosphere of the original cave.

When I visited Lascaux in 1999 it was not possible to go into the original cave but Lascaux II was accessible to visitors.  Unfortunately photography was not practicable.  The photographs accompanying this article are from Discovering Lascaux (English Edition) by Brigitte and Gilles Delluc, with photographs by Ray Delvert who took a large number of photographs in the original cave. Editions Sud Ouest  ISBN 2.90598.382.5.

Many more photographs are accessible on the web, including on the site Images of Lascaux – Bing. 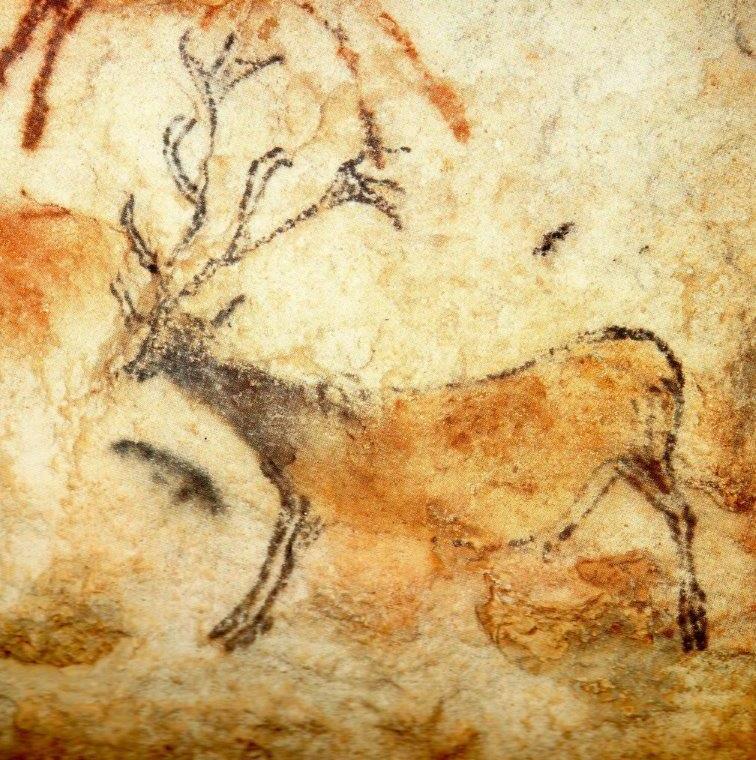 A brown stag in the Bulls' Chamber. 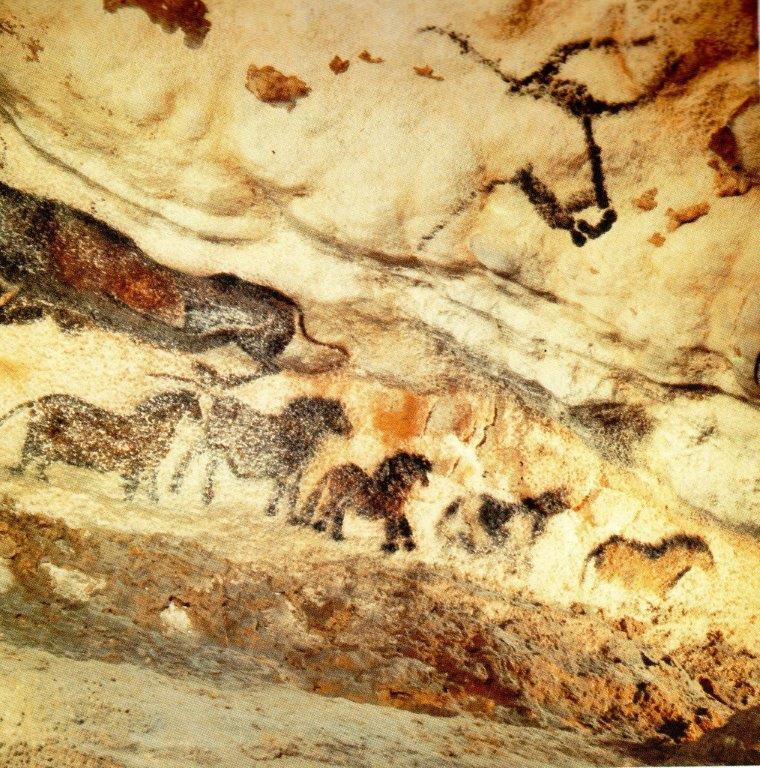 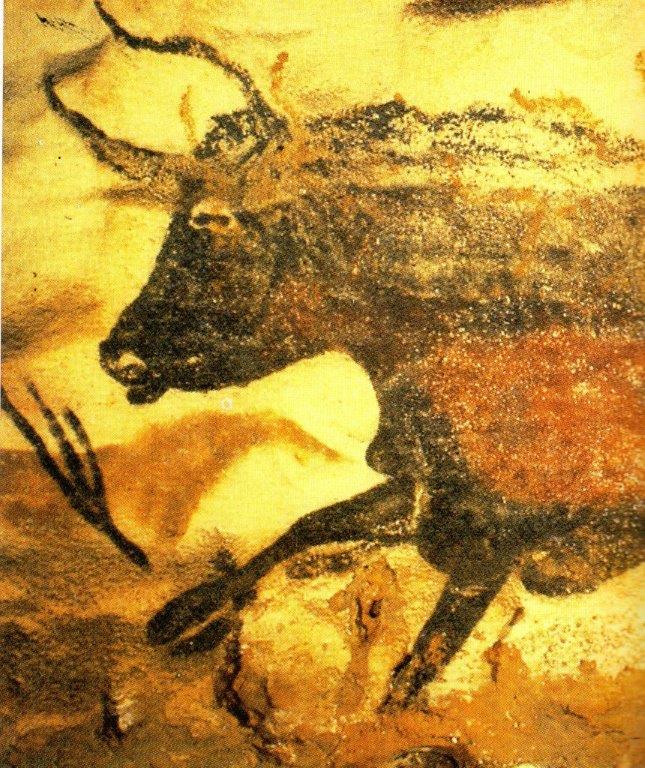 A bull in the Axial Gallery. 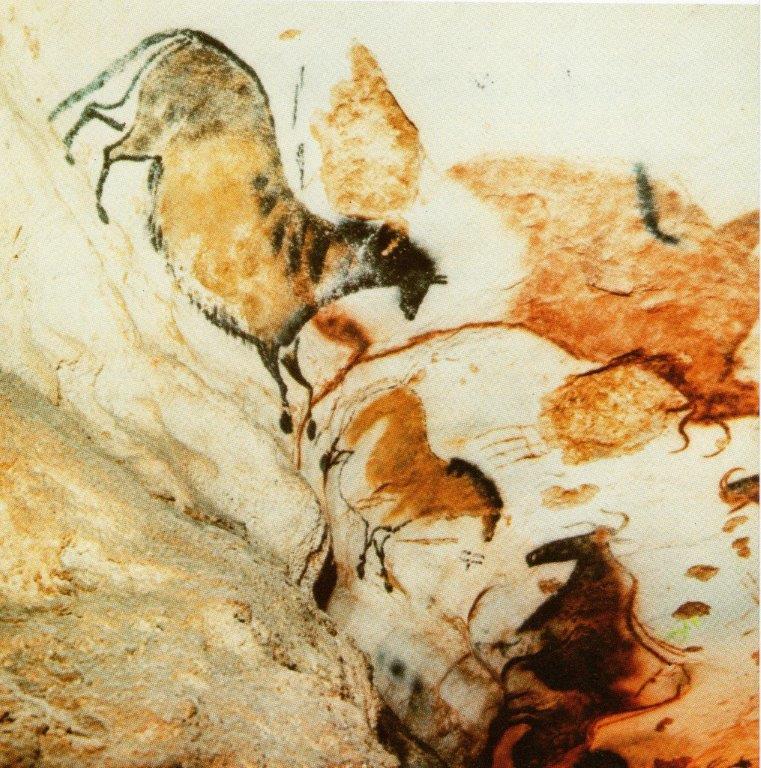 A "Chinese" (striped) horse, a small red horse and three cows in the Axial gallery.