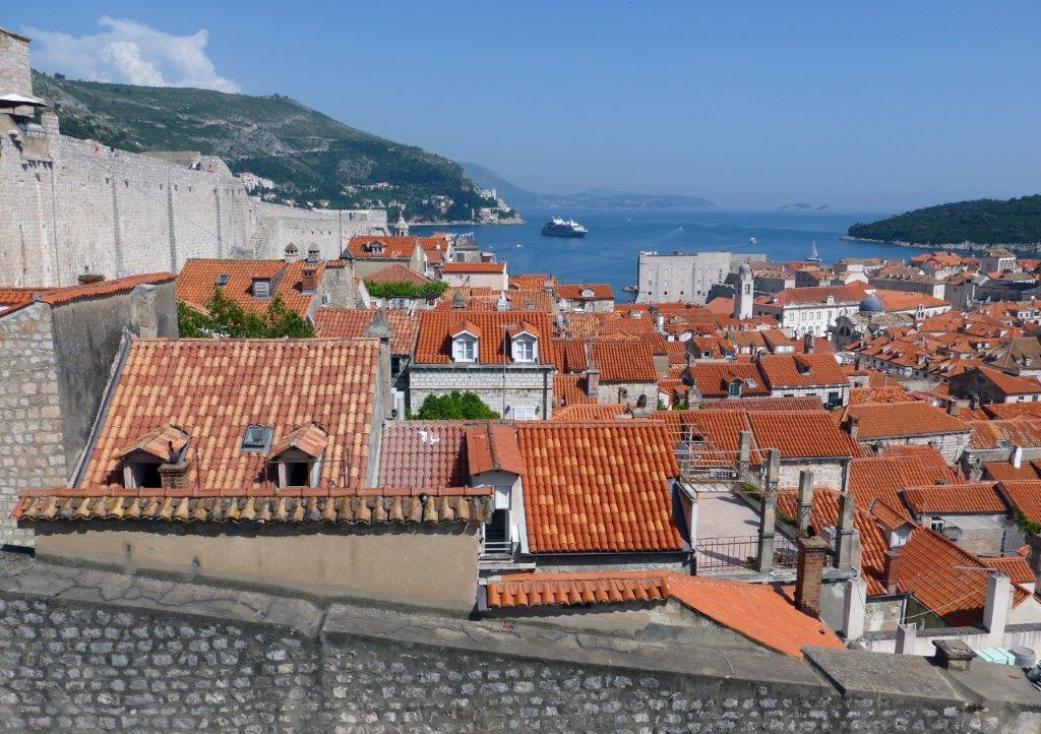 By George Repin
Dubrovnik, a city fronting the Adriatic Sea on the Dalmatian Coast of southern Croatia, was included in 1979 on the UNESCO list of World Heritage Sites. It is notable for its Old Town encircled by a massive stone wall, completed in the 16th Century, and for its well-preserved buildings. 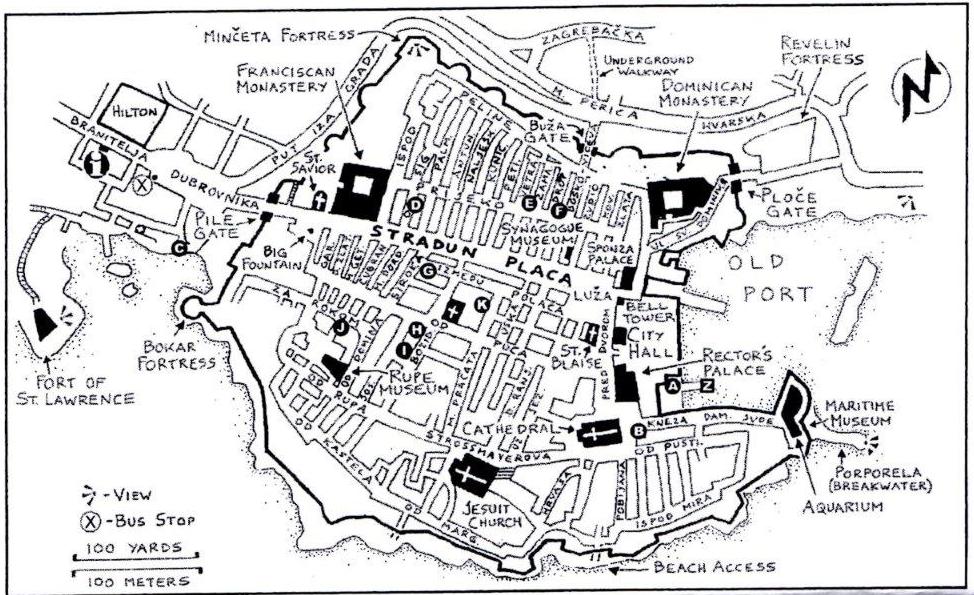 City plan of Dubrovnik.
Despite its World Heritage listing, on the break-up of Yugoslavia Dubrovnik was attacked on October 1, 1991 and besieged by Serb and Montenegrin soldiers in the Yugoslav People’s Army for seven months. The city suffered considerable damage from 650 hits by artillery shells which left 56% of buildings damaged.  Over a hundred civilians were killed. The International Criminal Tribunal for the former Yugoslavia issued indictments for generals and officers involved in the shelling.  General Pavle Strugar, who coordinated the attack on the city, was sentenced to a seven-and-a-half-year prison term for his role.
After the war damage caused by the shelling was repaired between 1995 and 1999, adhering to UNESCO guidelines.  After the repair and restoration work Dubrovnik re-emerged as one of the top tourist destinations in the Mediterranean, popular with cruise ships in the Adriatic. It has been called The Pearl of the Adriatic. George Bernard Shaw wrote “Those who seek paradise on Earth must come to Dubrovnik.”
The ancient city walls with their intricate and complex system of forts, bastions and towers are, for many, the main attraction of the Old Town of Dubrovnik. No other city has retained its medieval walls in such good condition as has Dubrovnik.
The city is completely surrounded by its defensive walls which run uninterrupted for 1940 metres (6365 feet). They constitute the second longest wall in Europe – only Hadrian’s Wall between England and Scotland is longer. The walls were built, added to and carefully maintained over the centuries. Even in the middle ages the city was fortified and was able to resist the Saracens for 15 months in the 9th Century. 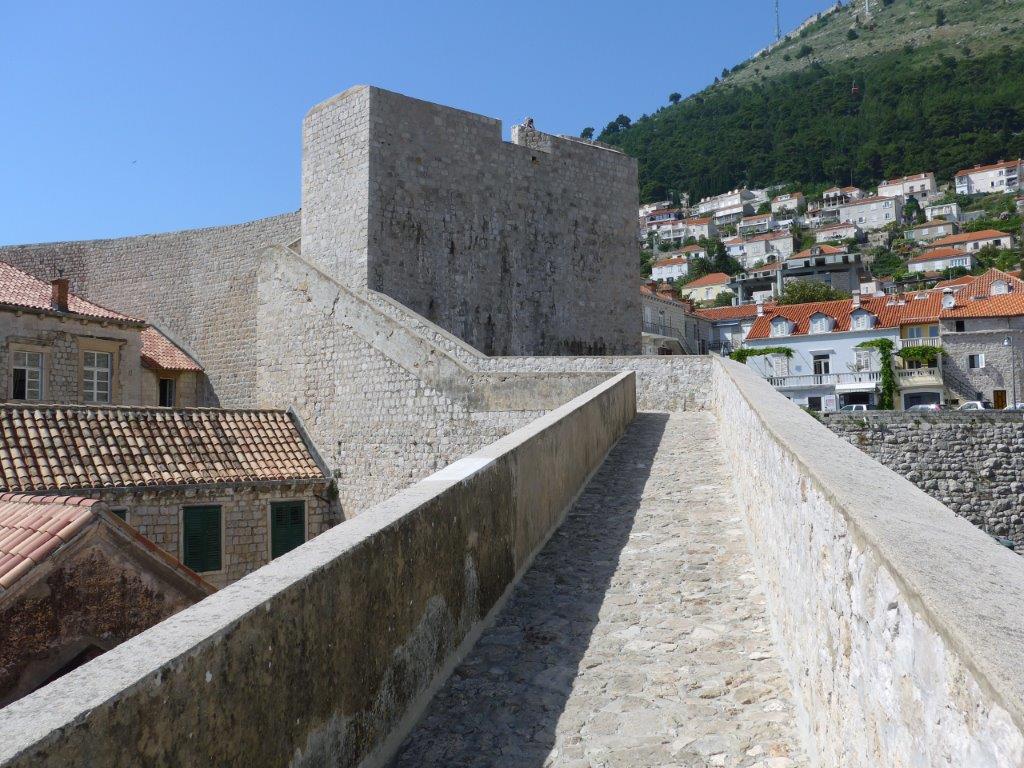 Starting the walk on the wall from the Old Port entrance. 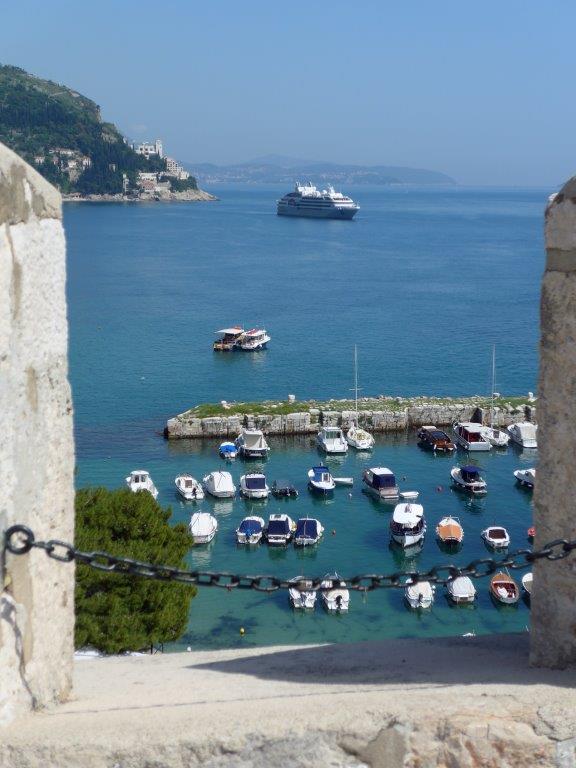 Looking over the Old Port to a cruise ship in the harbour.
Fifteen square forts were added in the 14th Century. The main wall on the land side is 4 to 6 metres thick, but narrower on the side facing the sea (1.5 to 3 metres thick).  Its height reaches 25 metres (83 feet) in some places.
Additions were made to the walls in the 14th, 15th and 16th Centuries. 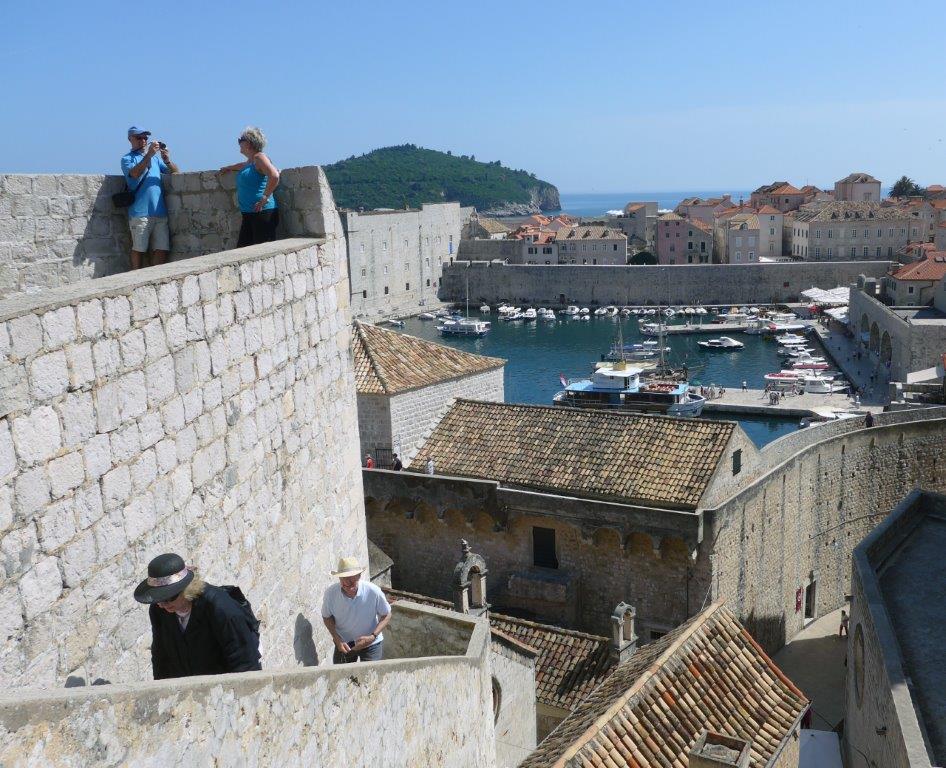 Walkers on the wall - the Old Port in the distance. 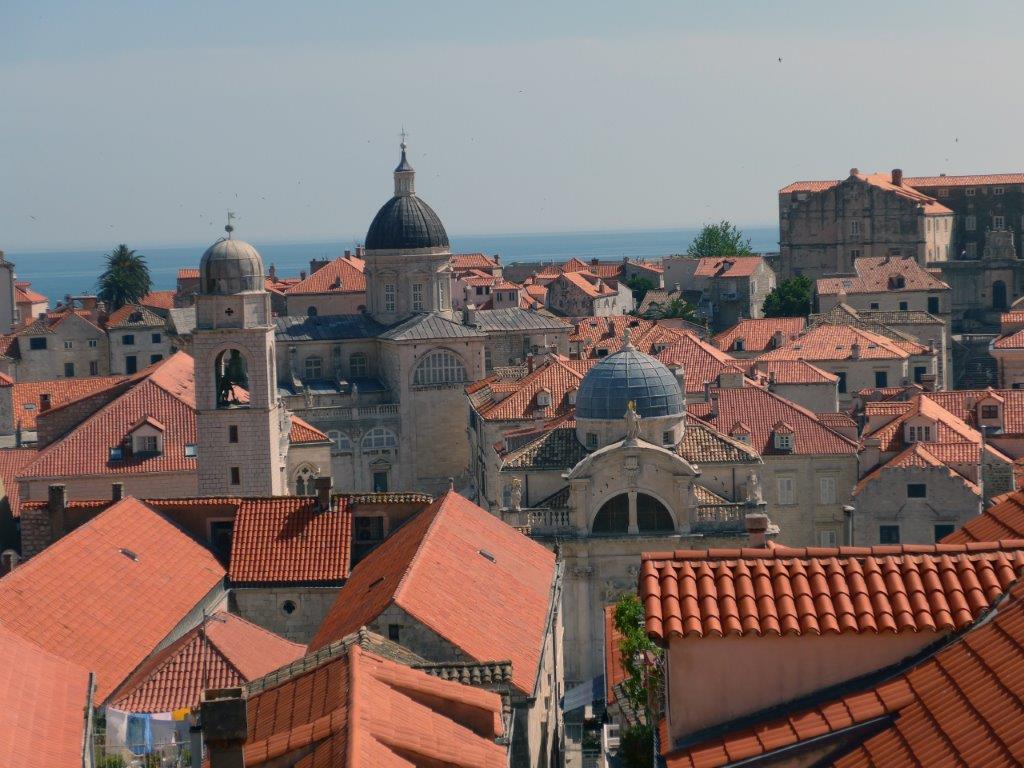 View over the city - with the dome of the cathedral.
The irregular parallelogram formed by the walls is protected at four prominent points by strong forts.  Additional protection is provided by two round towers, twelve quadrilateral forts, five bastions and two corner towers.  Access to the top of the walls from the Old Town is limited to four places, one point being near the port and another at the end of Stradum (Placa) Street. The walls have provided background in scenes of the TV series “Game of Thrones”. 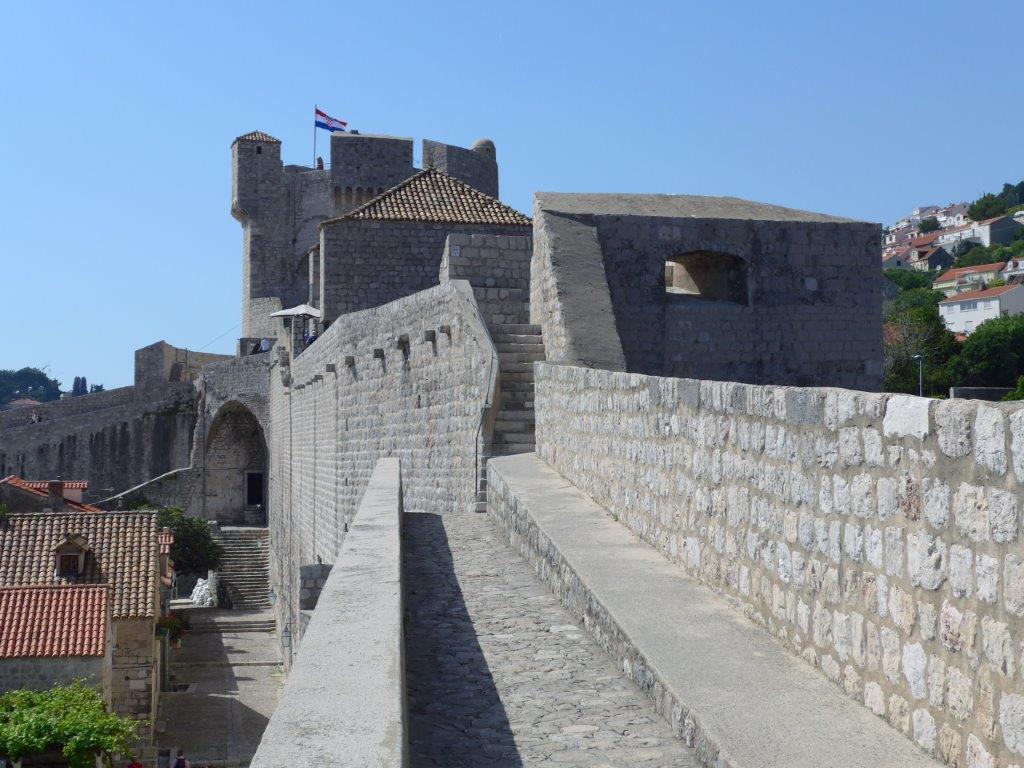 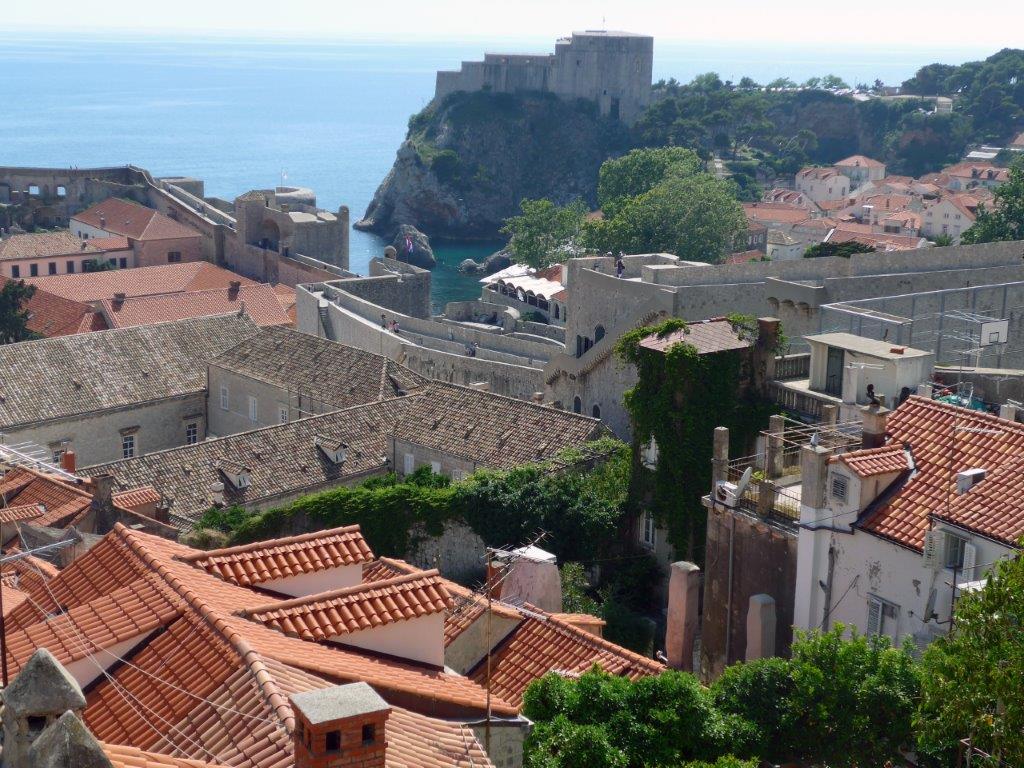 View over houses to the wall beyond. 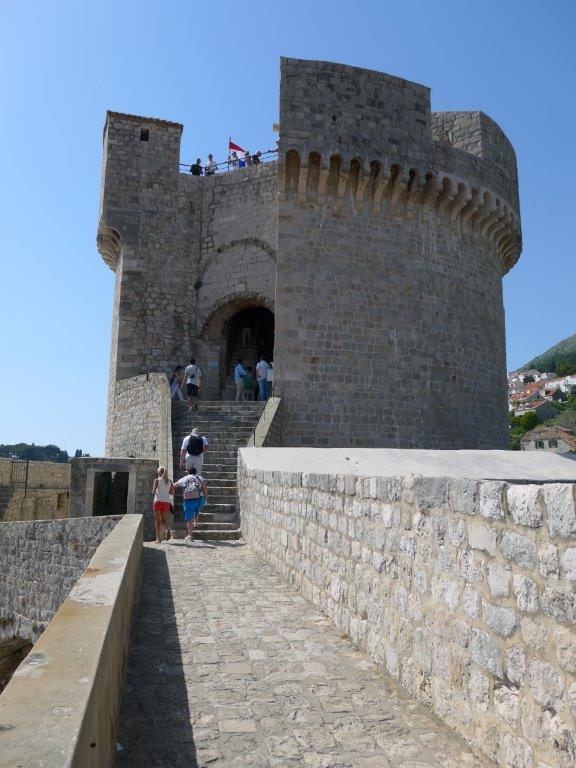 One of the towers.
A walk around the top of the wall provides views over the roof tops, out towards the harbour, down into the city streets and over areas outside the walls.
Apart from its walls Dubrovnik has much to offer as a tourist destination – well-preserved buildings ranging from the baroque St Blaise Church, the Renaissance Sponza Palace, the Gothic Rector’s Palace, several monasteries to the favoured promenade and gathering place, Stradun (Placa) Street. 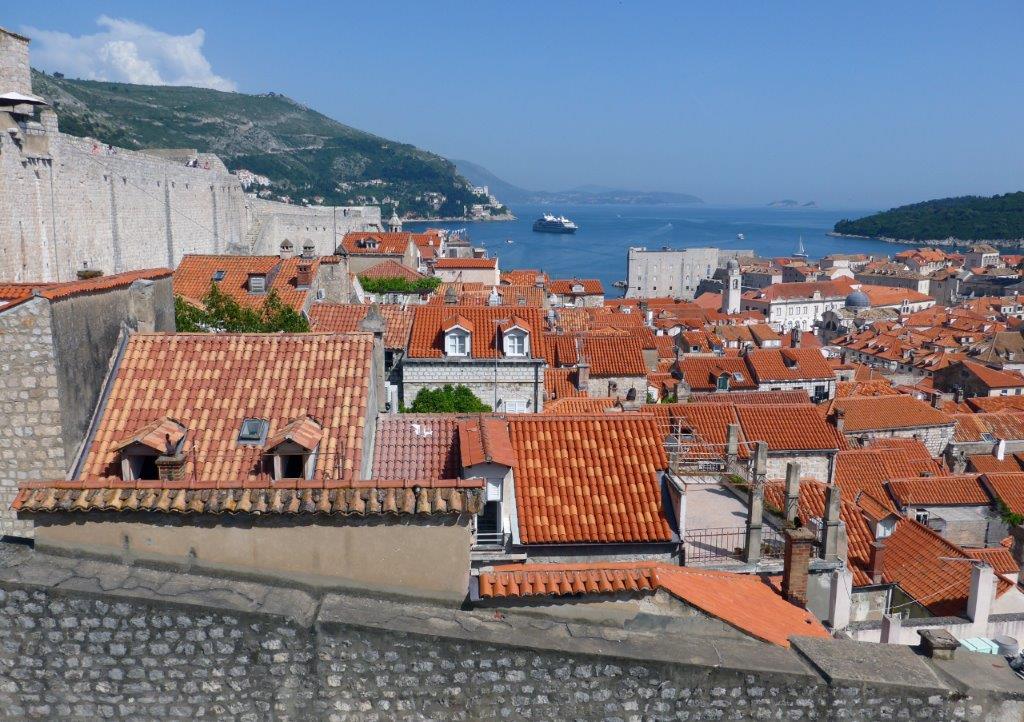 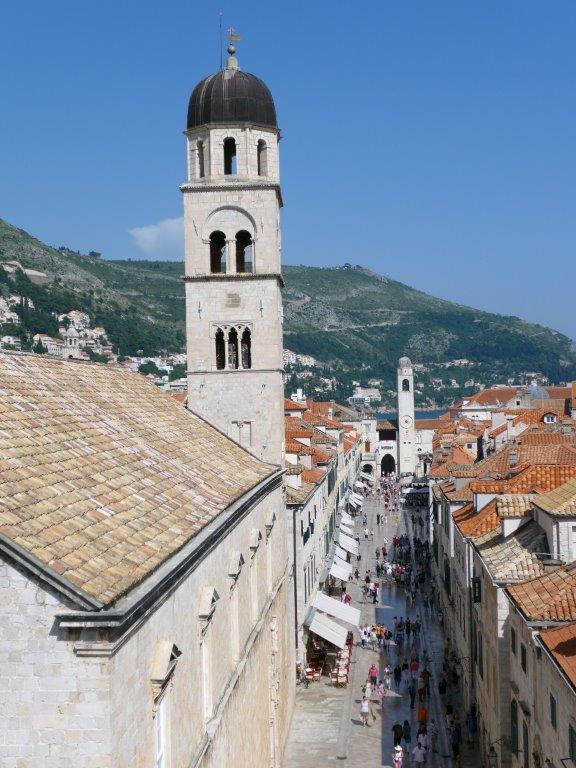 View down from the wall onto Placa (Stradun) - in direction of the harbour. 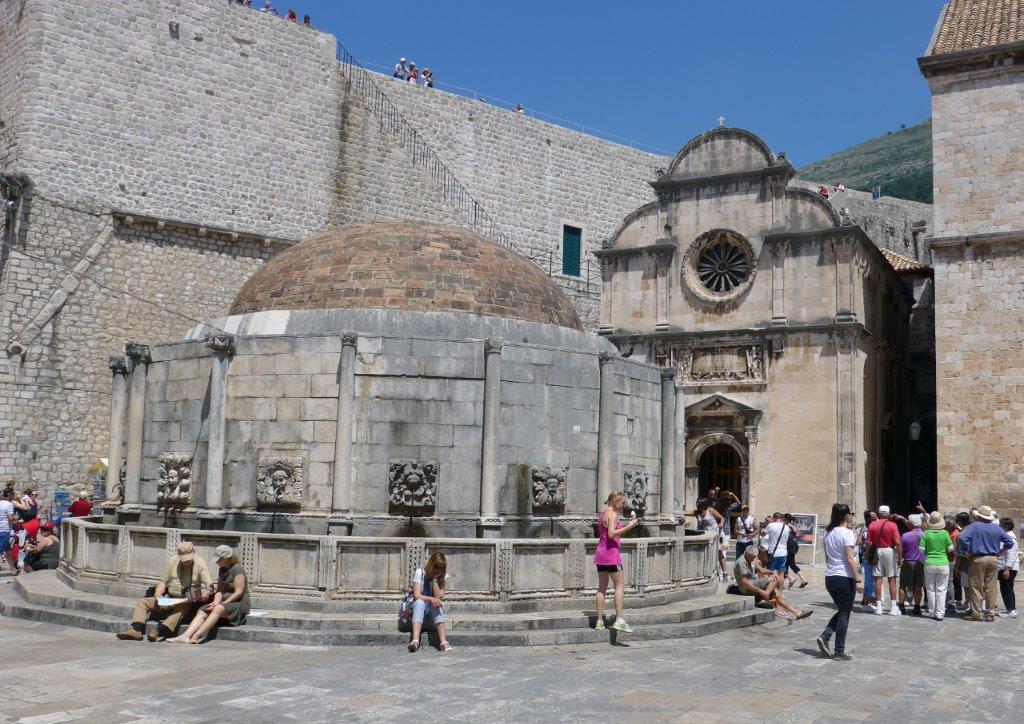 The water tower at the end of Placa - in front of St. Savior church. Note figures on top of the wall. 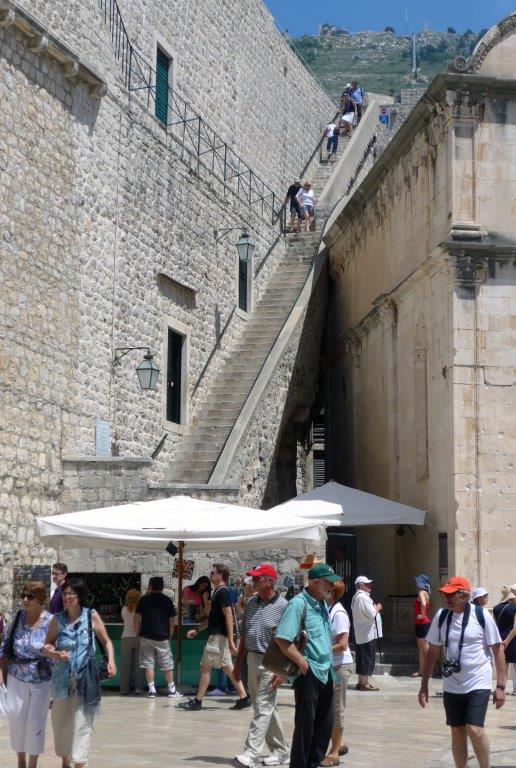 Stairs down from the wall beside St. Savier church. 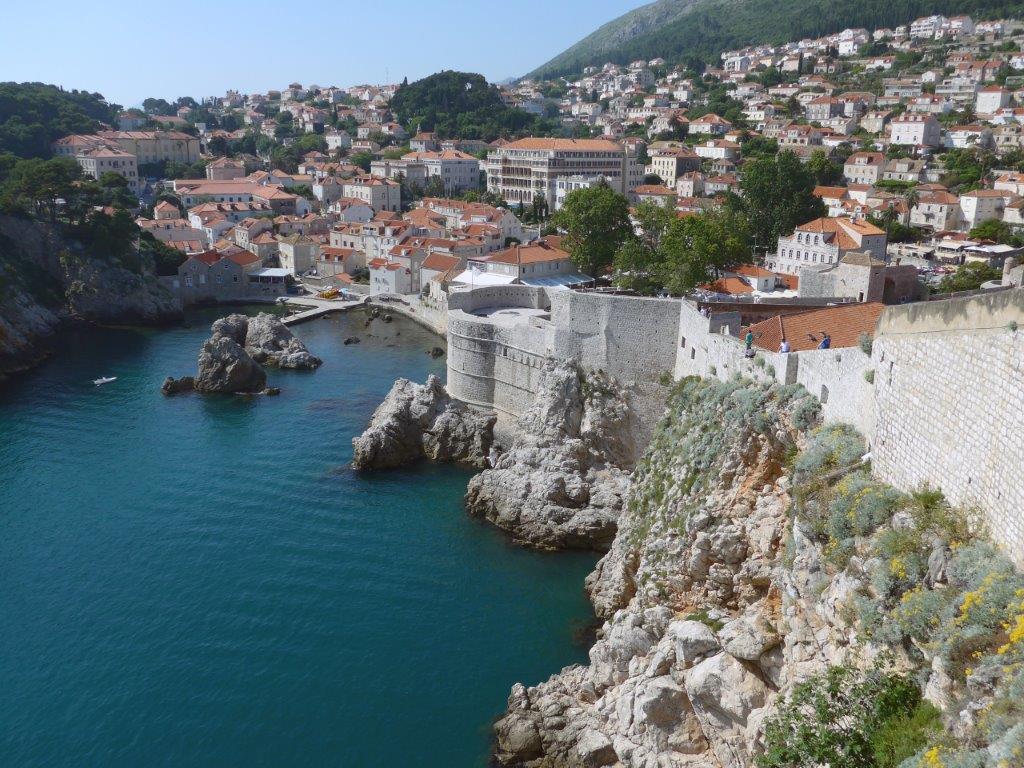 Bokar fortress on the wall beside the cliff edge. 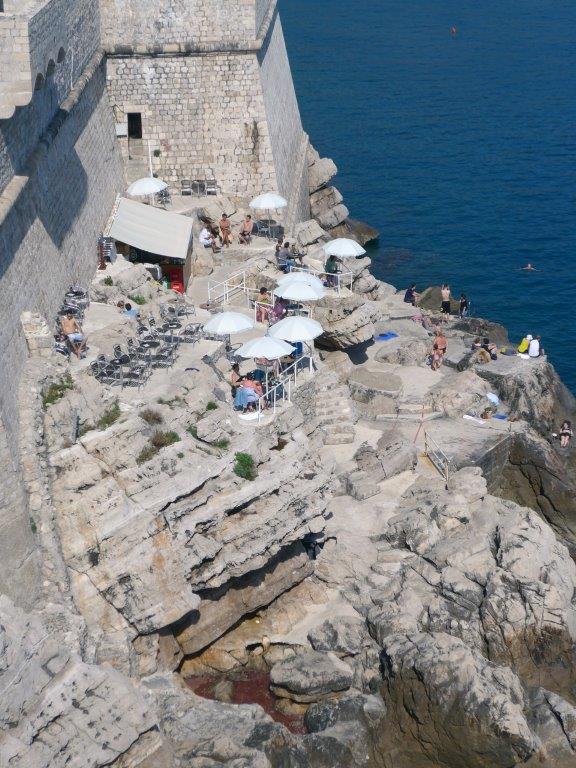 A cafe on the cliff top below the wall where there is access to a beach. 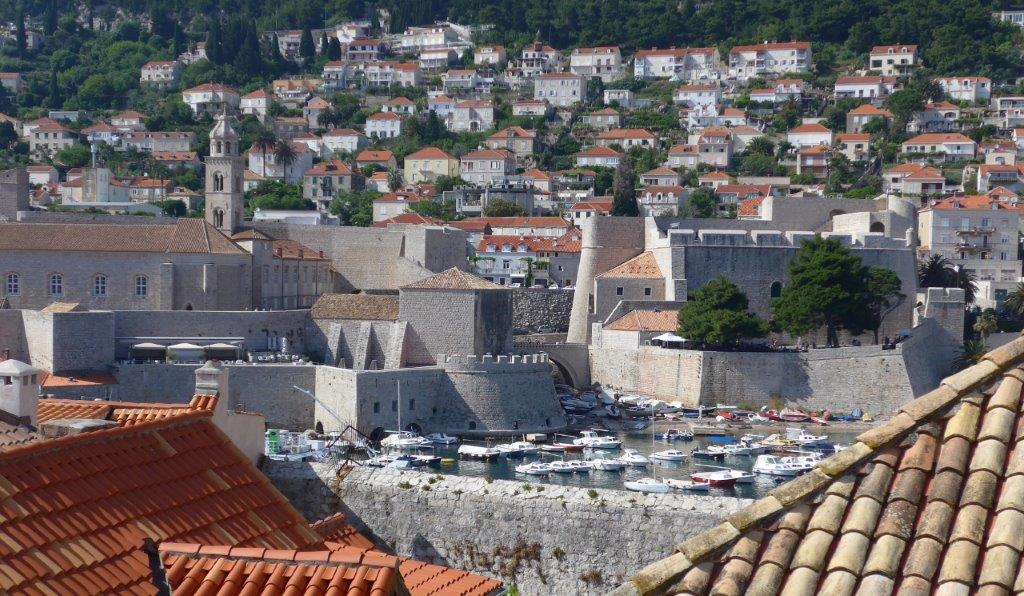 View back to the Old Port.
Photographs by George Repin in 2014.