Following the invasion of Greece by German forces on April 6, 1941 and their subsequent occupation of the country, the fate of Crete was sealed because of its strategic location in the eastern Mediterranean. The risk had been recognised by the British War Cabinet in the previous year and an attempt had been made to establish a base at Souda Bay towards the western end of the north coast of the island but little had been achieved because of the competing demands of the campaign in North Africa. 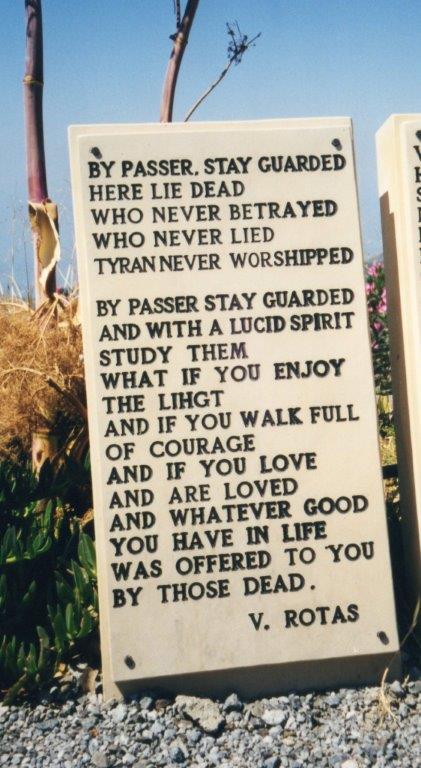 Right: English version of the dedication by V. Rotas

The battle for Crete began on the morning of May 20, 1941 and as Churchill subsequently wrote “….. never was a more reckless, ruthless attack launched by the Germans”.

A detailed account of the events of the subsequent 11 days is in Chapters XV and XVI of Volume 3 “The Grand Alliance”, Winston Churchill’s account of the Second World War.

“In many of its aspects at the time it was fought the Battle for Crete was unique. Nothing like it had ever been seen before. It was the first large-scale airborne attack in the annals of war. The German Air Corps represented the flame of the Hitler Youth Movement and was an ardent embodiment of the Teutonic spirit …”

“The Germans used the whole strength they could command.”

Parachutists were dropped in large numbers from heights varying from 300 to 600 feet.

Others arrived in gliders and in troop carriers in a continuous stream of aircraft, utterly regardless of losses of men and machines. Over 5000 Germans reached the ground in one area alone on the first day where they suffered heavy losses at the hands of New Zealanders. According to Churchill the German High Command seemed indifferent to losses. More Germans came in seaborne convoys. The British Navy suffered heavy losses trying to stem the flow. The defenders were overwhelmed by the scale of the German attack and evacuation of British and Imperial troops became inevitable.

The last evacuations were carried out on June 1. Nearly 5,000 British and Imperial troops were left behind somewhere in Crete and were authorised to capitulate. Sixteen thousand five hundred men reached Egypt safely, while nearly another thousand were helped to escape later by Commandos. British and Imperial losses were about thirteen thousand killed, wounded, and taken prisoner. Some troops who did not surrender hid in the mountains where they received support from villagers. Villagers were mercilessly punished if detected and batches of innocent peasants were shot in reprisals.

An immaculately maintained British Commonwealth War Cemetery is located on a small open plateau just above sea level on the eastern rim of Souda Bay. It is a quiet, peaceful spot, at the foot of a hill, bounded by trees and shrubs on three sides with the open sea of the bay in front. It is the last resting place of 1527 British Commonwealth dead.

Note: Churchill in his account used the spelling “Suda Bay” whereas the spelling used at the site is “Souda Bay”.

Photographs by George Repin in 2001. 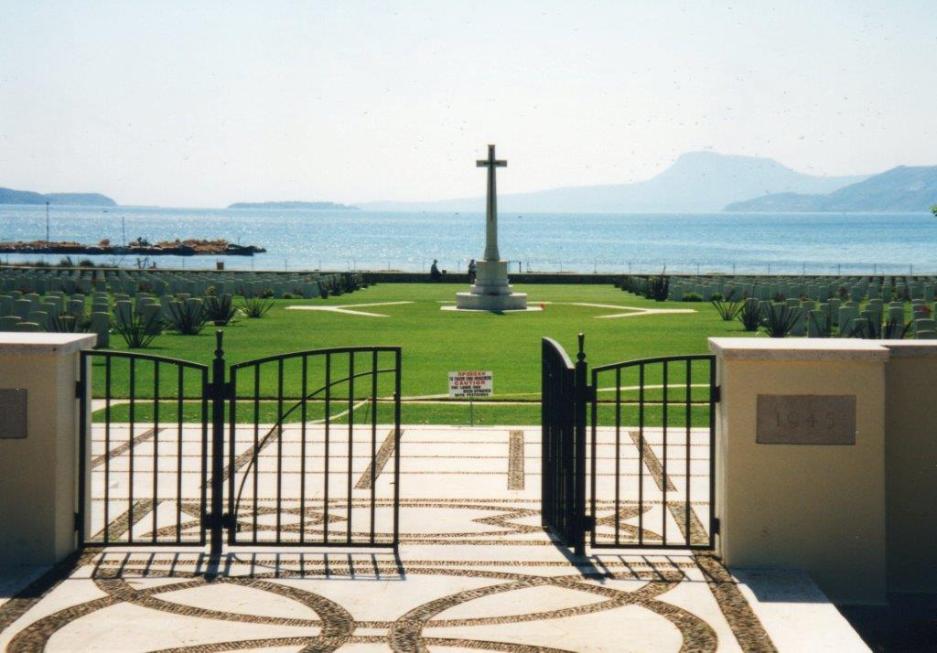 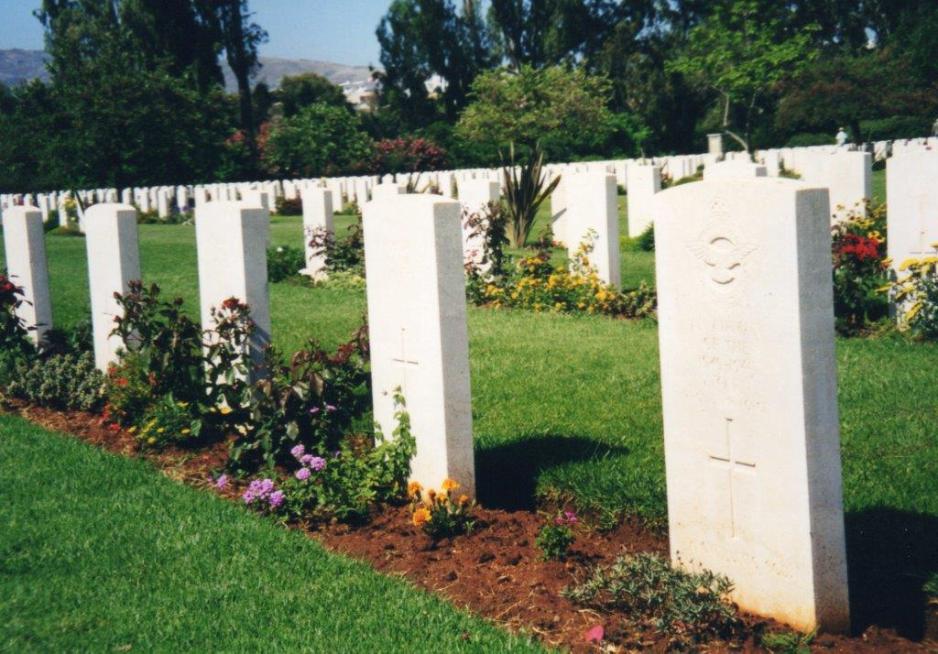 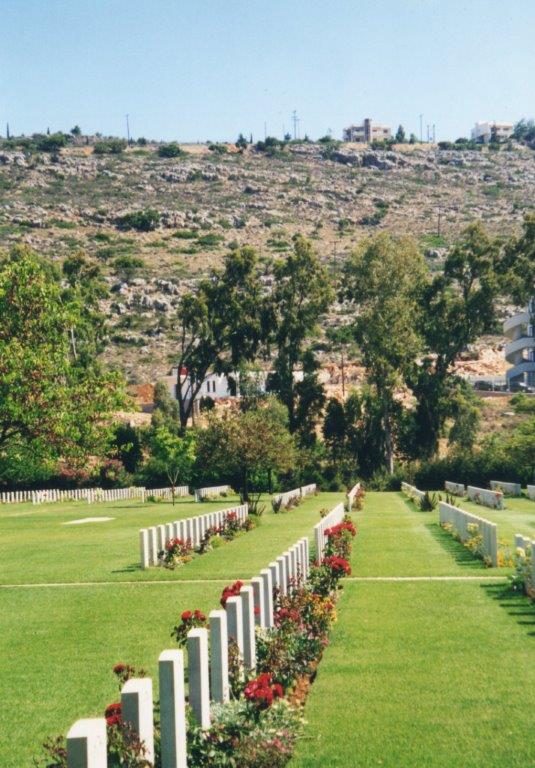 The steeply rising hillside to the North. 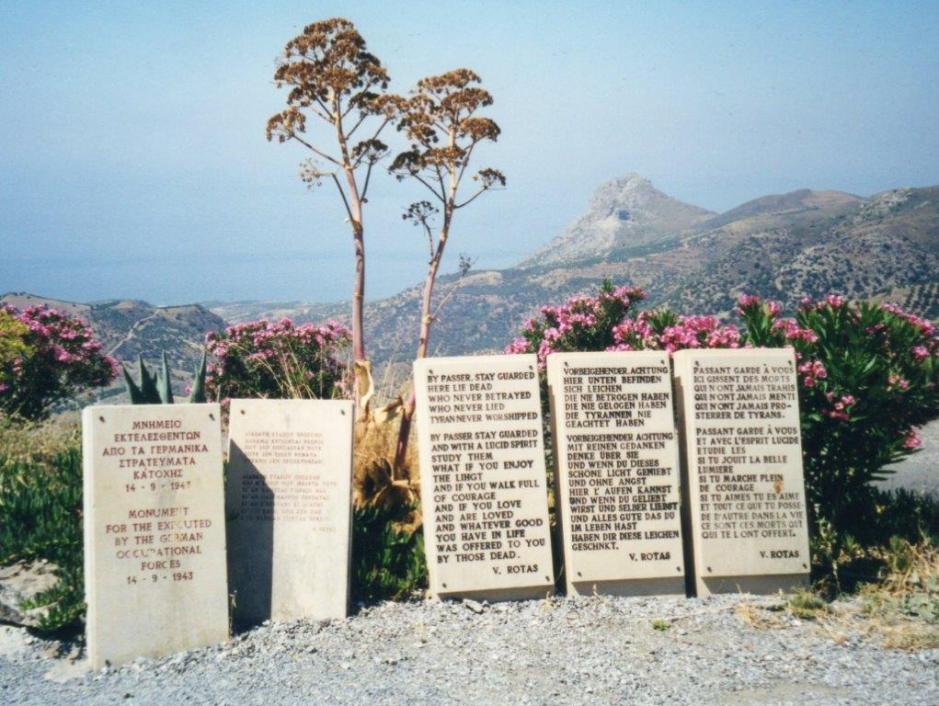 Monument to villagers executed by German Occupation Forces on 14 September, 1943 - located on the road from Sitia to Viannous.