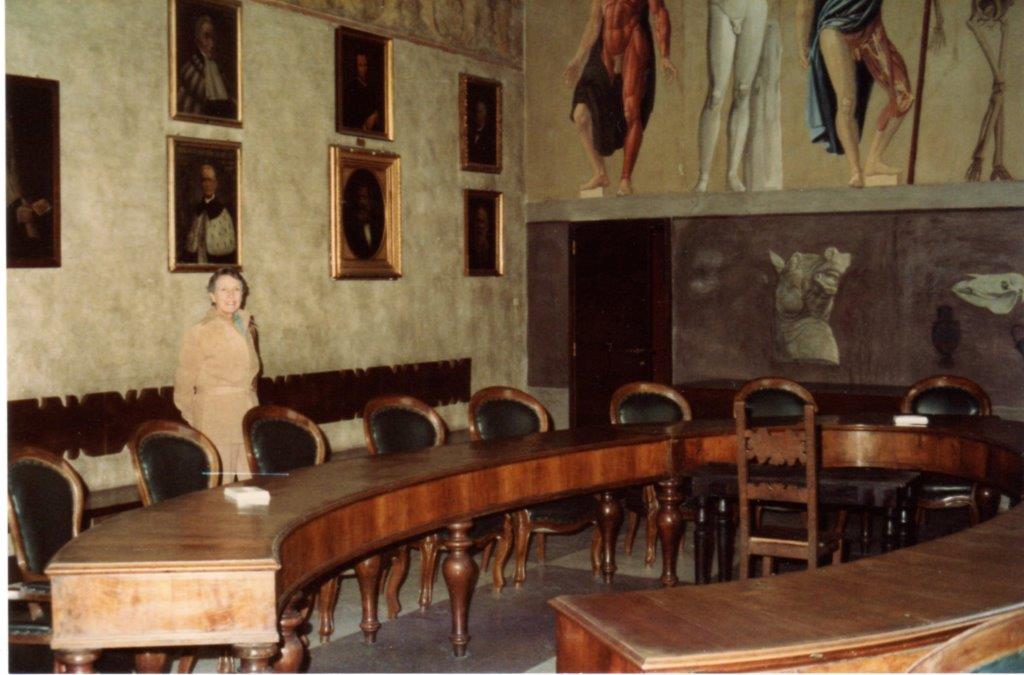 In the 14th. Century Hall of the Faculties of Medicine and Surgery.

In October, 1983 as my wife and I were driving from Venice to Verona I was looking forward to realising my long held ambition to visit, on the way, the University of Padua, a place of learning associated over many centuries with outstanding thinkers and teachers whose contributions to knowledge in many disciplines earned them respected places in history.

I thought of Nicholas Copernicus, the Polish astronomer, who is recognised for having proposed that the earth was a planet which travels around the sun each year and rotates on its own axis daily – the “heliocentric system”. His views published in “De revolutionibus orbium coelestium” were contrary to those of the Church. From 1501 to 1503 Copernicus studied medicine at Padua – at a time that medicine was closely allied with astrology because the stars were thought to influence “the body’s dispositions”.

I thought of Galileo Galilei, who held the Chair of Mathematics at Padua from 1592 to 1610, an Italian natural philosopher, astronomer and mathematician who made fundamental contributions to the sciences of motion, astronomy, the strength of materials and who developed the concept of the scientific method. In 1633 Galileo was convicted of grave suspicion of heresy for “following the position of Copernicus which is contrary to the true sense and authority of Holy Scripture” and was placed under house arrest for the rest of his life. The Church ordered the destruction of Copernicus’ writings.

Andreas Vesalius, a Flemish scholar, after taking his doctorate in Medicine in 1537, was appointed to teach surgery and anatomy. At Padua the freedom to investigate and criticise allowed him to overturn the anatomical theories of Galen, which up to that time were considered indisputable, demonstrating that they were applicable only to animals.

He went on to present in exact terms the first systematic description of the anatomy of the human body derived from dissection and direct observation. In short he laid the foundation of the study of Human Anatomy.

There were other medical men such as William Harvey the English physician who elucidated the true nature of the circulation of the blood and the function of the heart as a pump. Harvey is thought to have formulated his ideas while at Padua. There was Bernadino Ramazzini, Professor of Medicine from 1700 till his death in 1714.

Ramazzini is generally regarded as the founder of the discipline of Occupational Medicine. He wrote the first comprehensive work on occupational diseases (“Diseases of Workers”) outlining the health hazards of irritating chemicals, dust, metals and other agents encountered by workers in 52 occupations.

On arriving at the gates of the University around noon my hopes were dashed by an unprepossessing little man on the gate who told me that not only I was “too late” but also it was the wrong day for visits anyway. I appealed to him. I explained I had come all the way from Australia and I told him of my interest in the famous people associated with the University over the centuries, naming some of them.

To our surprise he not only responded to my appeal by inviting us to come in but also insisted in taking us on an extensive tour of what he called “his” university, taking us to places to which otherwise we would not have had access. He was unbounding in his enthusiasm about the University and its history and remarkably knowledgeable. It was an extraordinary experience.

He took us among many other places to:

• The elegant courtyard with two tiers of columns – Ionic on the top level and Doric below – designed by Andrea Moroni of Bergamo.

• The Great Hall whose walls are hung with the coats of arms of alumni.

• The Fourteenth Century Hall of the Faculty of Medicine and Surgery.

• The anatomy theatre of Girolamo Fabrici d’Ácquapendente built in 1594, which was the model for the theatre built in Uppsala, Sweden in 1663.

• The Chamber of the Academic College and to a room where the degree certificates of many alumni, including that of William Harvey, are preserved and displayed.

Each time we said that we should go he said “No, no – come I will show you more.”

My ambition to see the University Padua could not have been satisfied in a better way – and I never did find out our guide’s name.

Photographs by George Repin on 19 October, 1983 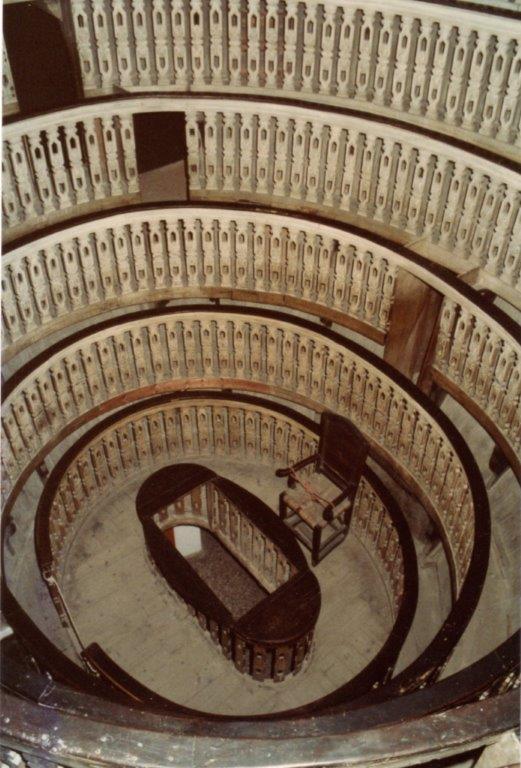 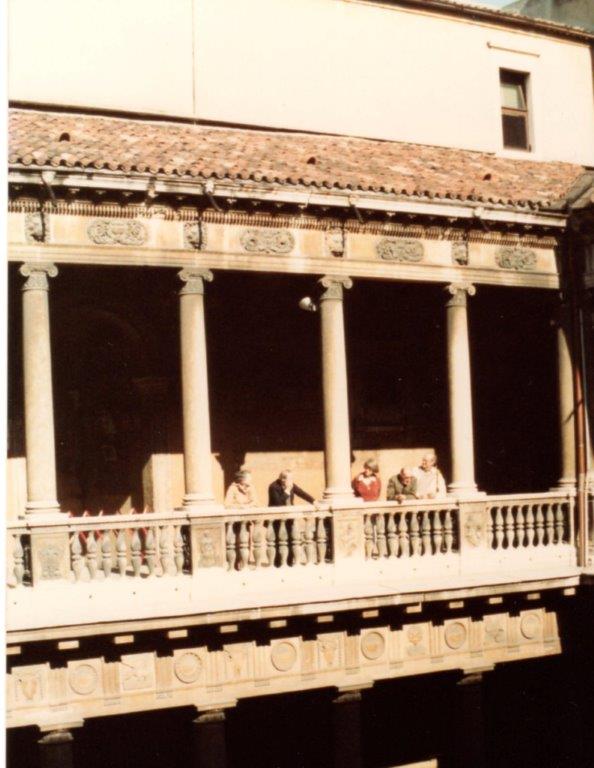 Colonnades on one side of the 16th. Century courtyard - Ionic columns on top and Doric columns below. 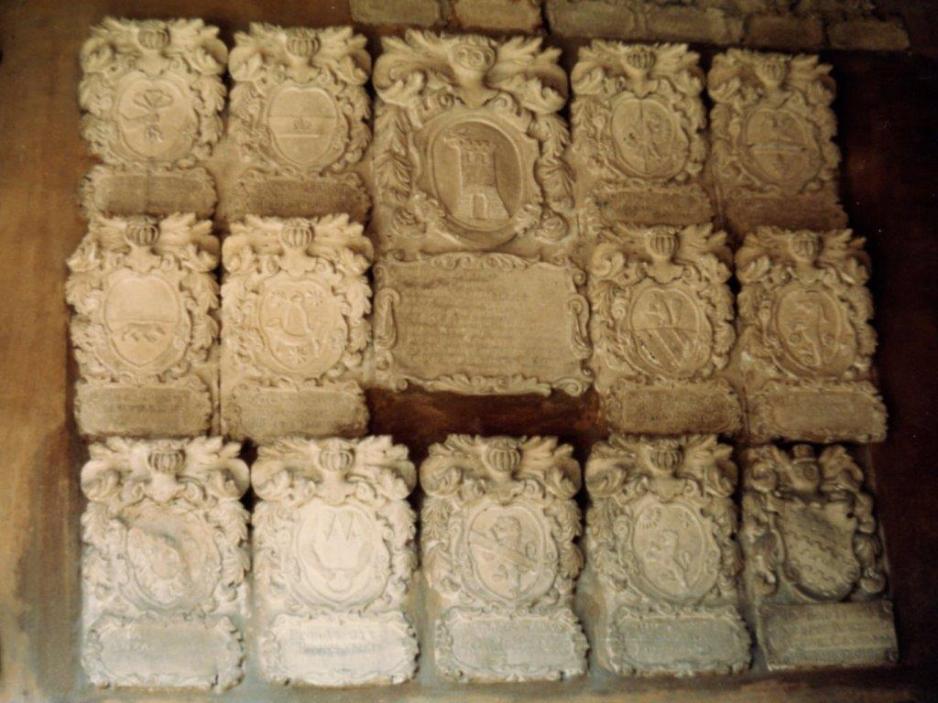 Coats of Arms on the wall of the lower colonnade of the 16th. Century courtyard.