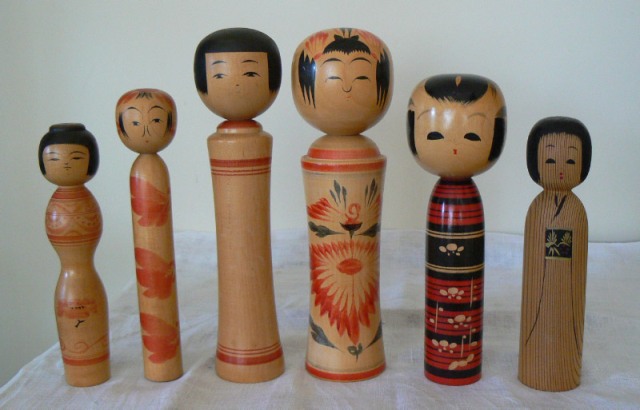 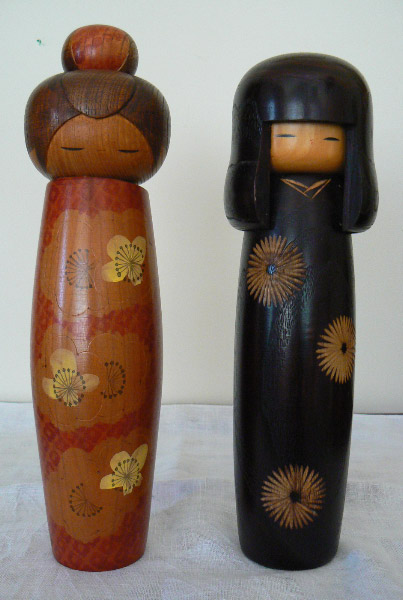 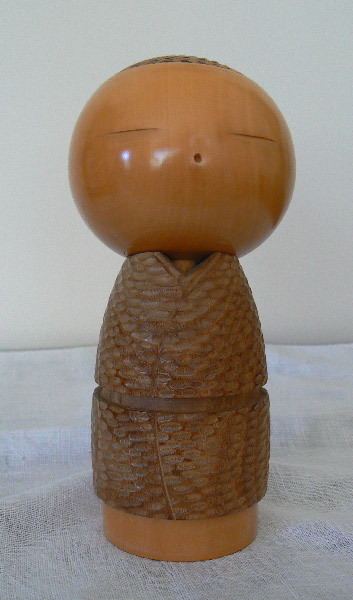 A "one-off' Kokeshi from an artist's studio in Odawara.

Unlike many Japanese folk crafts Kokeshi dolls are individualistic reflecting the personal style of the craftsman who proudly signs his name at the base of the doll.  Such dolls are simple consisting only of a wooden cylinder with a sphere firmly set on top, and are hand made,  but they captivate the Japanese because of the variety of their designs and facial expressions.  They first appeared in the Edo period (1600-1868) and originally were made by wood turners in the Tohoku region of northern Japan as toys for their children – often as a means of filling in time when confined to their homes in the severe winters to which the country is subject. Over time, because the craftsmen often lived near hot springs, a good market for the dolls developed among visitors to the springs.

The shapes and patterns of “Traditional” Kokeshi dolls are related to specific areas. Usually they are classified into eleven types.  However, there is great variation in the dolls themselves and people familiar with doll designs generally can recognise the towns where individual dolls were made. 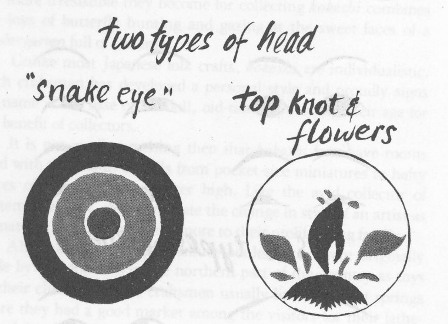 Sketches of two types of heads.

The woods used vary, with cherry used for its darkness and Mizuki (dogwood) for its softness. Itaya-kaede (Acer pictum) a Japanese maple, and Nashi (pear) are also used. The timber is cut in autumn, stripped of bark and seasoned outside for varying times, from six months to five years (depending on the wood).

A Kokeshi craftsman entrusts the carving of the wood (now usually done by lathe) to an assistant and turns his skill to the hand painting of the dolls, particularly the faces and kimono patterns. There are 15 “standard” types of eyes alone, such as crescent, half-moon, lidded dots and almond - and diverse forms of hairstyle and decoration.  Completed dolls are polished with beeswax. The techniques and skills in making the dolls have been handed down from fathers to sons and from masters to apprentices for generations. 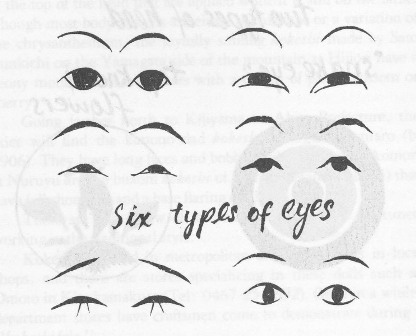 Sketches of six types of eyes.

“Creative” Kokeshi are a relatively new development as an art form since World War II.  They are more contemporary in shape, design and colour and are not particular to a specific region of Japan.  Some are made by particularly talented artists adapting the traditional concept to produce beautiful individual pieces which are displayed in art galleries, greatly appreciated by private collectors and highly valued.

Collectors of Kokeshi in Japan may have thousands of dolls of varying sizes and designs in their collections. They watch for changes in the style of an artist they favour as he matures and add to their collections.  In more recent times an interest in Kokeshi has spread internationally with many collectors outside Japan.

Photographs of dolls by George Repin.
Drawings of ‘six types of eyes’ and ‘two types of heads’ from “Sketches of Japanese Crafts” by Patricia Massy, The Japan Times Ltd, First Edition 1980.