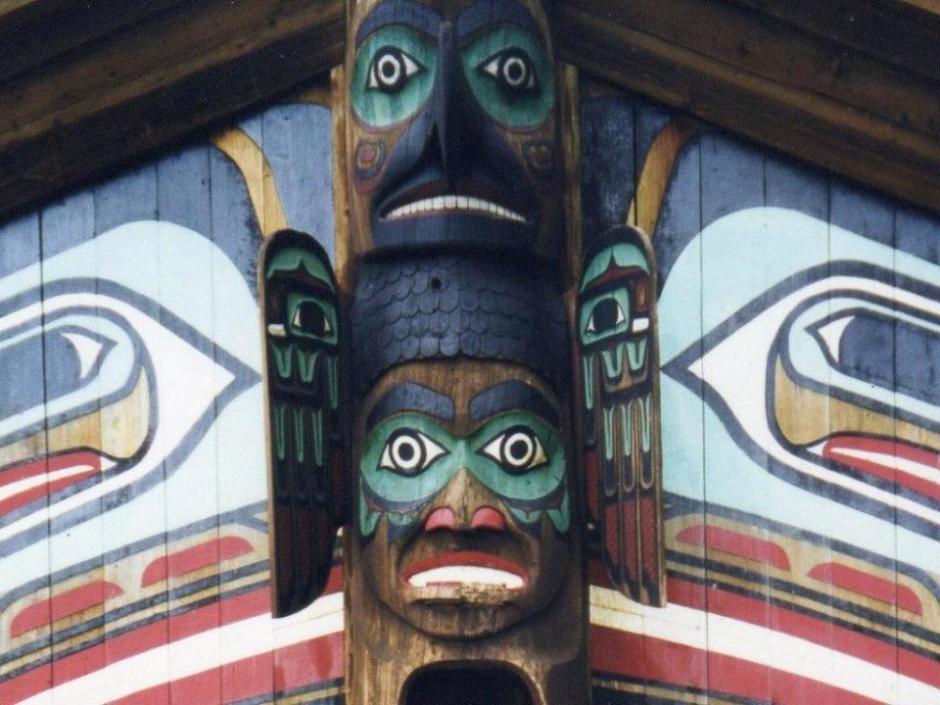 Close-up of decoration above the door to the community house.

Totem poles are monumental sculptures carved by indigenous peoples of the Pacific Northwest Coast of North America (Alaska in the United States and British Columbia in Canada). Typically they are carved from the highly rot-resistant trunks of Thuja plicata (popularly known as western red cedar). They are not of religious significance but communicate aspects of native culture, such as familiar legends, clan lineages, and notable events or myths.  They also may serve as architectural features, welcome signs for visitors to the village and even as mortuary receptacles. The meanings of the designs on totem poles are as varied as the cultures that made them and their placement and importance lay in the observer’s knowledge and connection to the meanings of the figures.

While widespread in the eighteenth century and into the nineteenth century carving of totem poles waned and, in part because of the region’s climate, few examples of poles carved before 1900 remain.

The construction of a totem pole is a major undertaking.  After a tree is chosen and felled it is moved to the carving site where the bark and sapwood are removed.  After deciding the side of the tree to be carved the back half is removed and the trunk hollowed out.  Stone, shells and bones originally were the carving tools but from the early 1700s iron tools made the job easier and faster.  After carving, the pole is partly painted to bring out only particular features. Generally not much paint is used because the traditional method of preparing paint is long and difficult.

The method of raising the pole was to place its end into a deep trench while supporting the other end by a wooden scaffold.  Hundreds of strong men then hauled the pole up to a vertical position while others braced the pole with ropes on each side.  When the pole was upright the trench was filled with rocks and dirt.

When it was realised that totem poles were disappearing through decay, and little effort was being made to preserve them, the Saxman Totem Park was established in the city of Saxman, 2.3 miles south of Ketchikan in southeastern Alaska.  The park displays a collection of totem poles, twenty-four of which were relocated from abandoned Tlingit villages in the area.  Other poles were reconstructed by skilled Tlingit carvers under the auspices of the Civilian Conservation Corps in 1930.  The park was listed on August 7, 1979 on the U.S. National Register of Historic Places.

Ketchikan is the southeasternmost city in Alaska.  It is the first stopping place of cruise ships from Seattle going north in the Inside Passage. Its economy is based on tourism, government services and commercial fishing. In 1998 230 commercial fishers were based in Ketchikan. 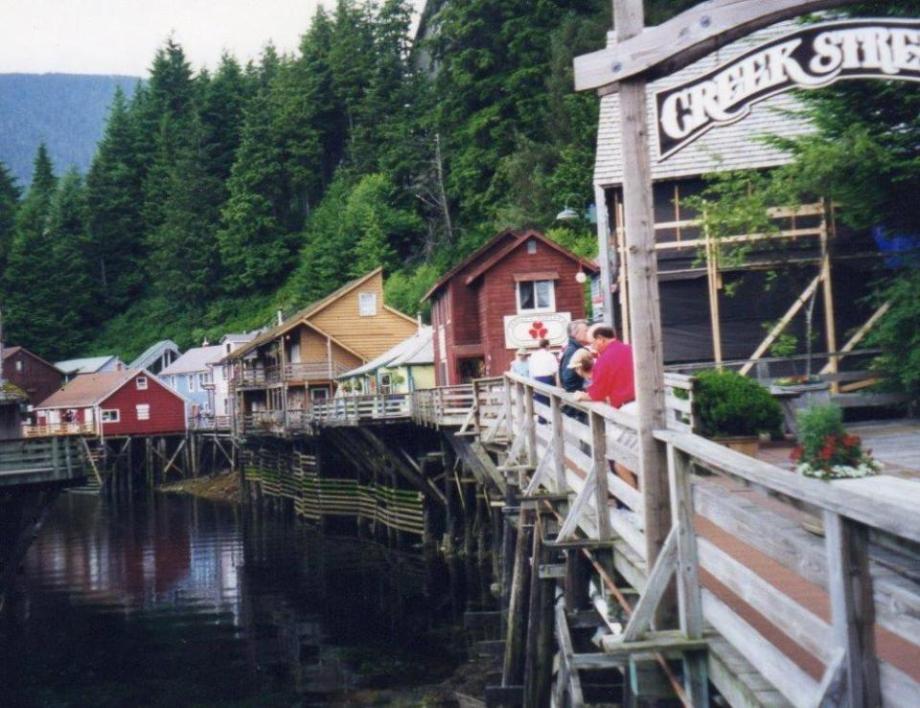 Creek Street in Ketchikan - actually a boardwalk built on pilings - for half a century the red-light district, in its heyday supporting 30 brothels. 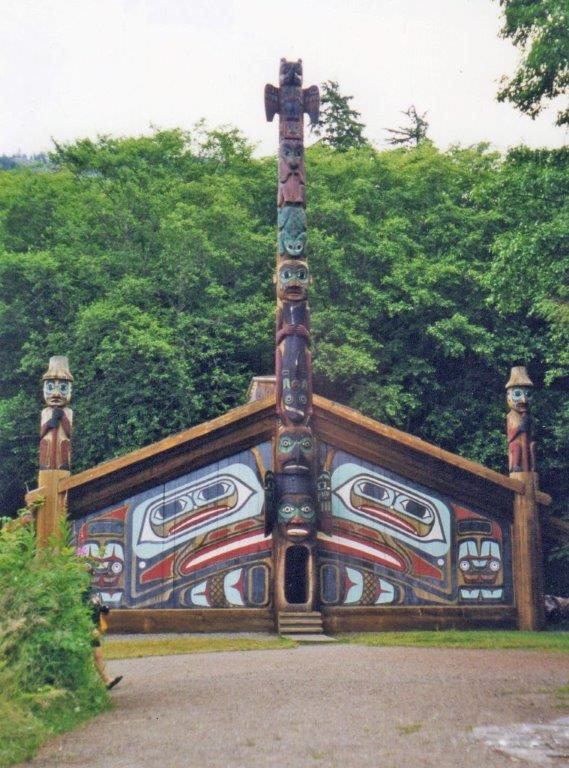 Totem pole inside the community house

Ketchikan has the world’s largest collection of standing totem poles (approximately 80) throughout the city and at four other locations, including the Saxman Totem Park and the Totem Bight Historical State Park, north of Ketchikan at which the photographs of totem poles in this article were taken. 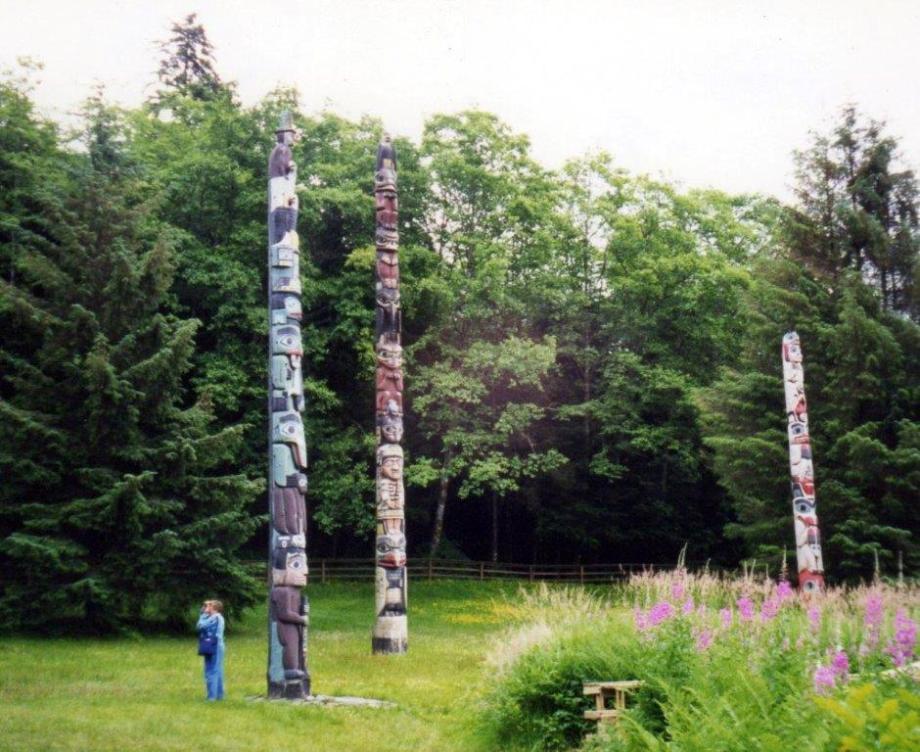 Photographs in this article were taken by George Repin in 1998. 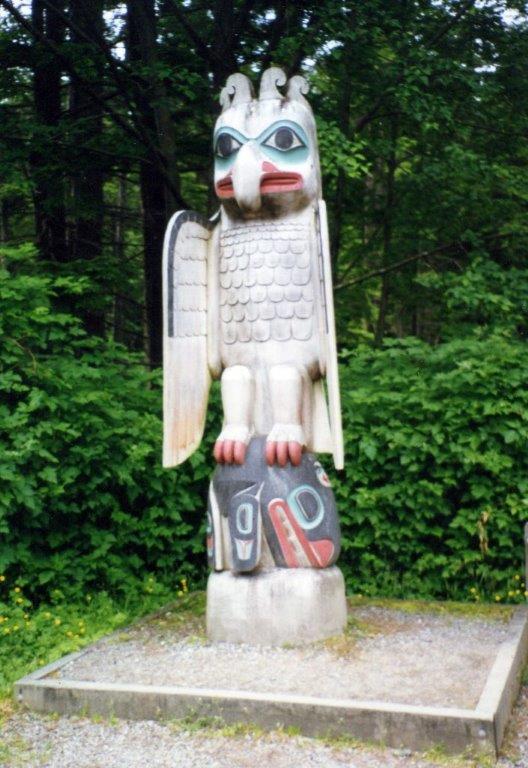 Note the base under the eagle's claws

Below: Detail of the base on which the eagle is standing 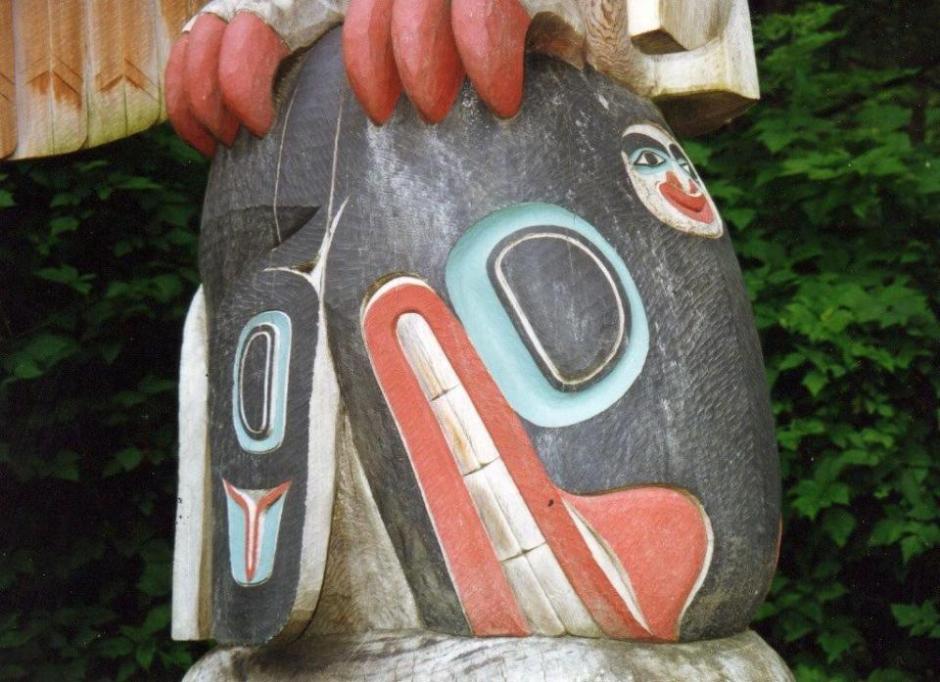 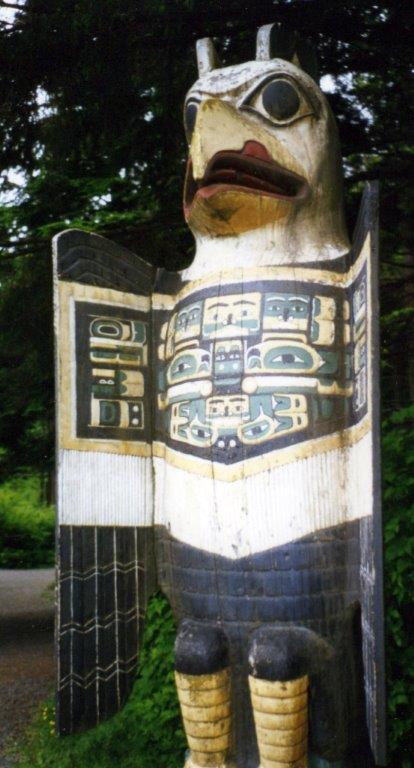 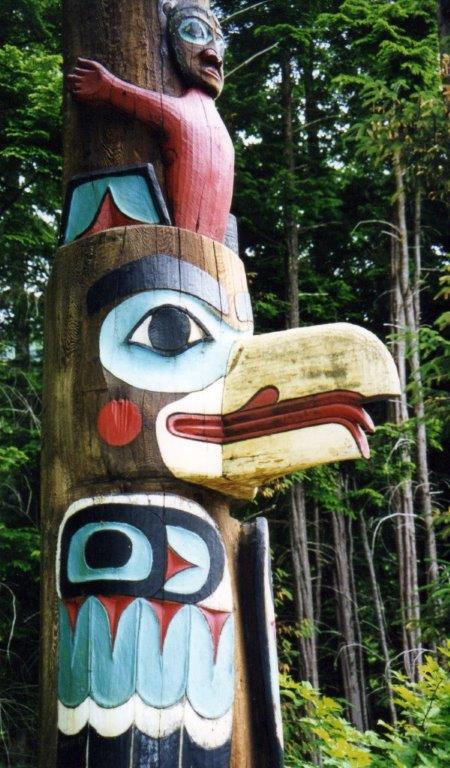 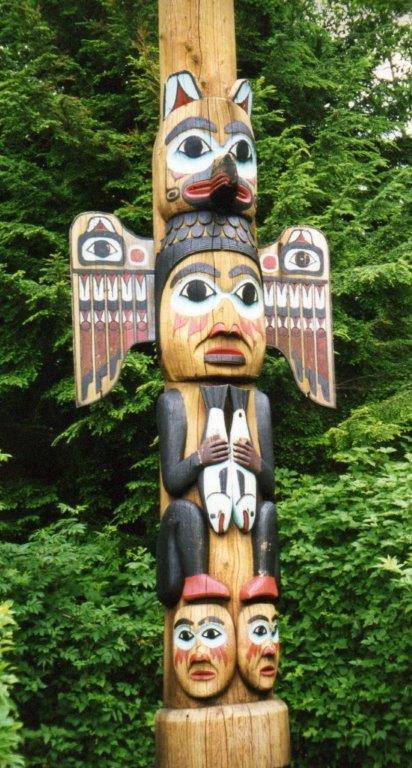 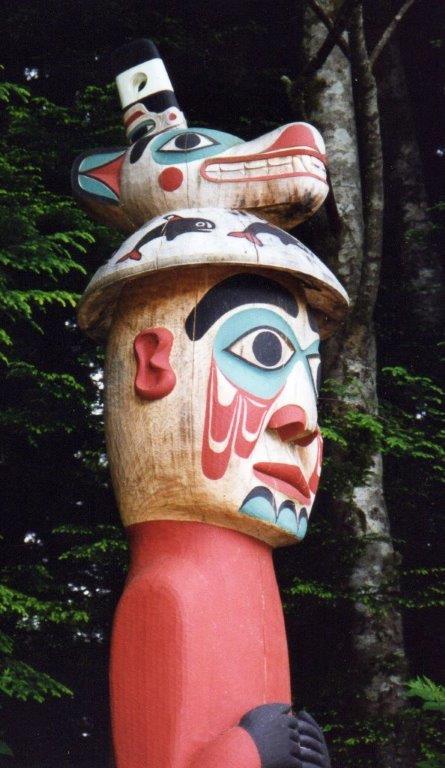 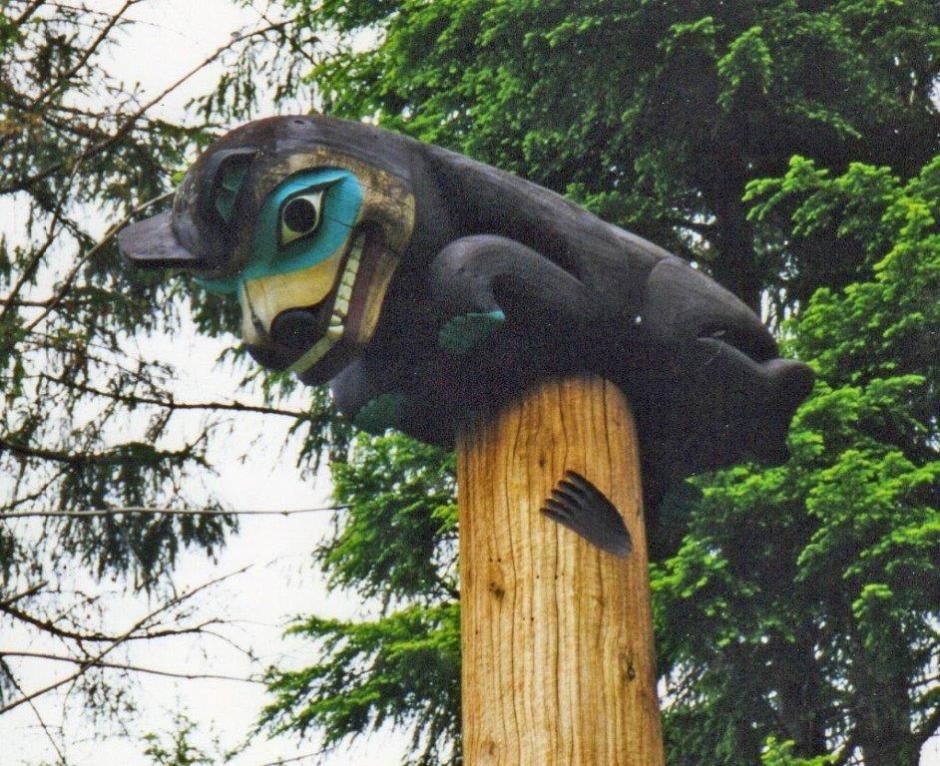