Segments of columns from Temple of Zeus awaiting restoration. 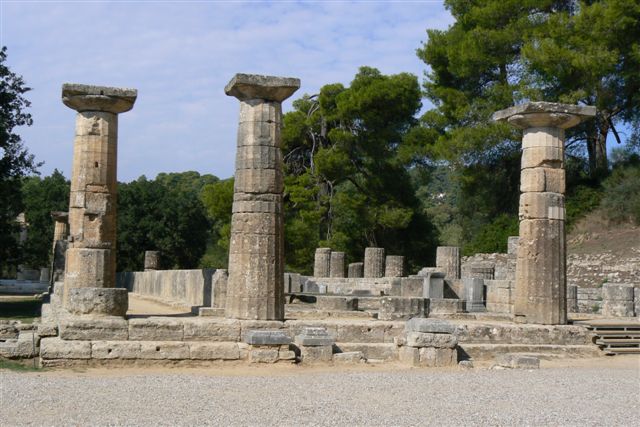 Restored Doric columns of the Temple of Hera. 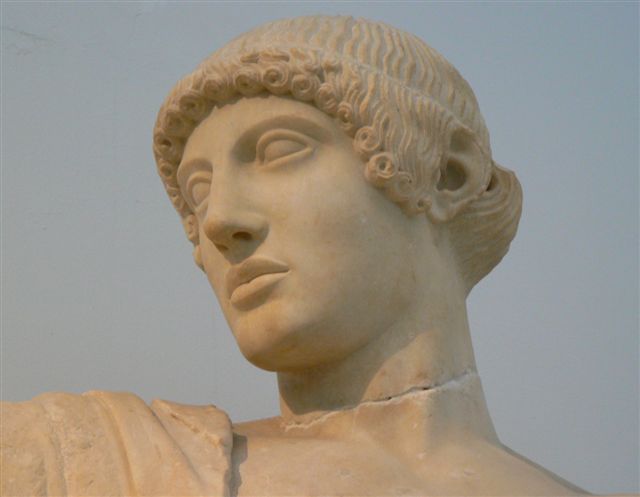 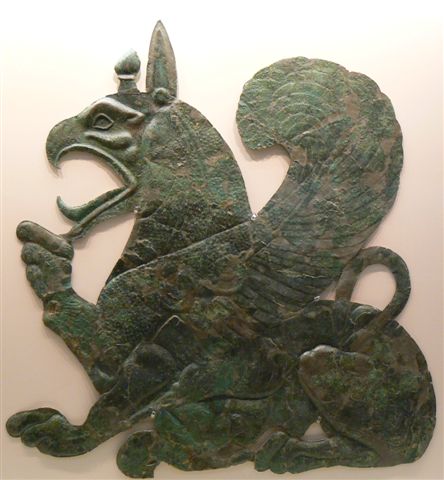 Bronze decoration from a shield or breast plate.

While attention is focussed on the Games of the XXXth Olympiad in London it is a good time to reflect on the background to the Olympic Games.   Although the Pythian Games were held in Delphi and games were held in other places in Greece it is the Games held in Olympia from 776 BC to 394 AD which capture the imagination and generally are regarded as the forerunners of the modern games.

Every fourth summer, Greeks from the Black Sea to the Western Mediterranean came to Olympia in the Peloponnese for five days of games, celebrations and rituals as a form of worship of pagan gods.  Months before, athletes came for a mandatory period of training. The Games were abolished in 394 AD by the Christian Emperor Theodosius I because, to him, they represented a connection with paganism.

The archaeological site at Olympia is well preserved because it was covered with silt from the flooding of two rivers and because stones were not removed from the site to build elsewhere.  Consequently when excavation started it yielded a treasure trove of artefacts many of which now can be seen in the two museums associated with the site and Olympia continues to yield up new discoveries.  It and the associated museum are well worth a visit. 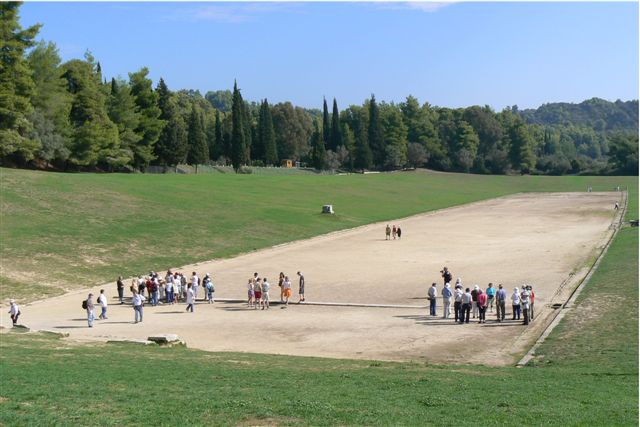 Site of the Olympic Stadium

The Temple of Zeus was a central feature and held the magnificent statue of Zeus made by Pheidias in the 5th Century BC.  Built of wood in Pheidias’ workshop nearby and covered with gold and ivory it was named by Antipater of Sidon as one of the Seven Wonders of the Ancient World.  It has not survived but ancient drawings give some idea of its size and magnificence. The workshop of Pheidias, still with some of his tools and other equipment, was discovered and excavated in the 1950s.

The pediment of the temple was embellished with sculptured figures of the pagan gods known to us through Greek mythology.  Fragments of the figures which have been assembled in the Archaeological Museum give some idea of the impressiveness of the Temple. 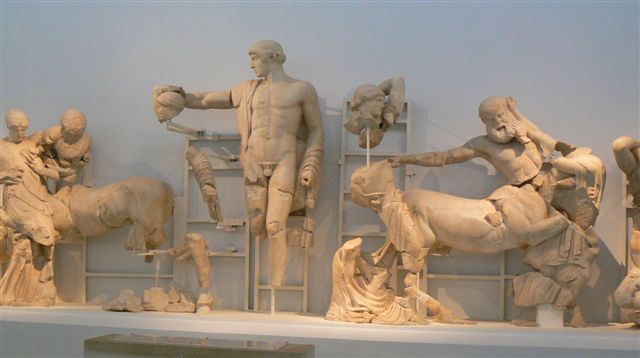 Ensemble of figures from the Western Pediment of the Temple of Zeus - central figure is Apollo (5th Cent. BC)

Some of the Doric columns of the Temple of Hera have been restored to provide a fitting location in the modern era for the lighting of the Olympic Flame before each new Games.  Eleven women dressed in flowing white gowns, representing the Vestal Virgins, kindle the flame from the rays of the sun through a parabolic mirror and the torch is lit.

Pierre de Fredy, Baron de Coubertin generally is credited with the establishment of the modern Olympic Games which were first held in Athens in 1886.  He founded the International Olympic Committee and was its second President. He expressed his idealistic view of the competition in the following words: The important thing in life is not to triumph but the struggle, the essential thing is not to have conquered but to have fought well (Translated from the French).  This view has been expressed more simply by others as: It is not the winning but the taking part that counts.

In contrast Professor John R Hale of the University of Louisville has written: “Nothing could be more alien to the ancient Greek idea of agon (i.e. contest).  The games at Olympia and elsewhere were all about winning.  There were no second prizes.  Winners were lavished with feasts and gifts and remembered in statues and stories; losers returned home in shame.”