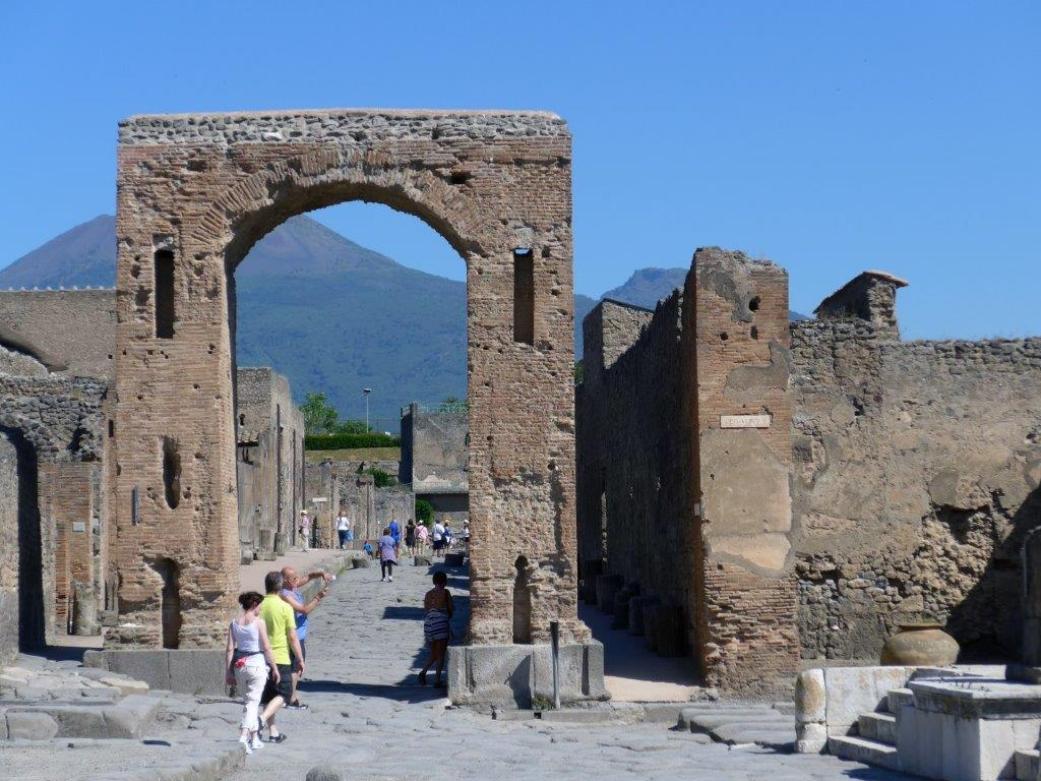 By George Repin
On 24 August 79 CE Mount Vesuvius, which dominates the Bay of Naples, erupted explosively burying Pompeii, Herculaneum and villas on the shores of the Bay under a crust of volcanic ash.
At the start of  the eruption, when dry ash was falling and showers of pumice were raining down upon the city,  people who could not or refused to flee took refuge in buildings or under cover. By late evening the volcanic material had reached the upper stories of buildings when the second phase of the eruption released searing super-heated gases which swept through the city killing those who had stayed. Their bodies were buried in the accumulating five metres of volcanic ash. Of Pompeii’s estimated population of 10,000 to 12,000 most escaped in the early stages of the eruption - but around 2,000 people perished.

Cast of a human prepared by filling with plaster the void left after decomposition of human material. 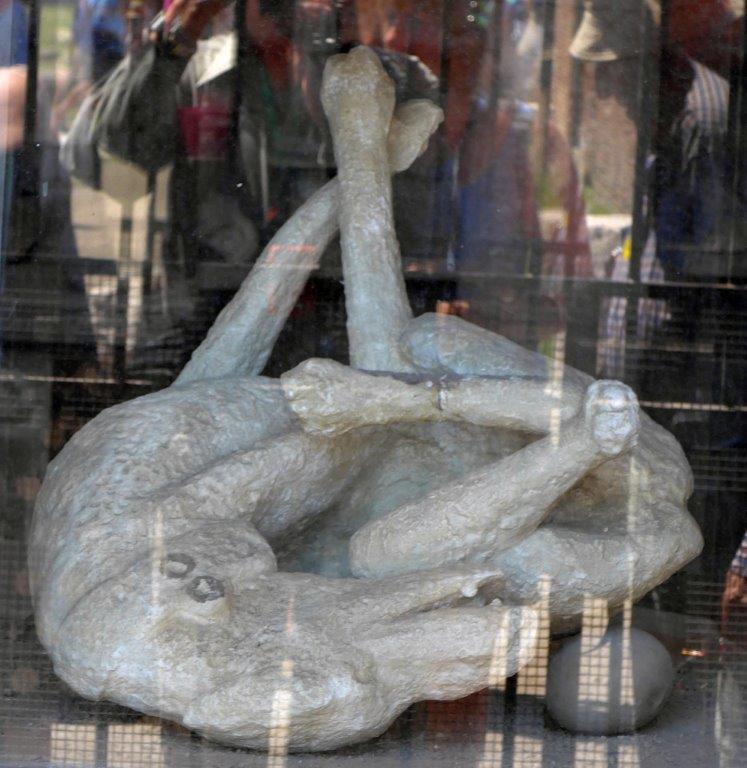 Cast of a dog which had been tied up.
For the next seventeen centuries the city was sealed as if in a time capsule.  It was preserved and forgotten until excavations started in 1748.  The excavations revealed Pompeii street by street, building by building, room by room – providing unparalleled information about life in a city of the Roman Empire of the time. The excavations continue to this day and are still yielding useful knowledge. 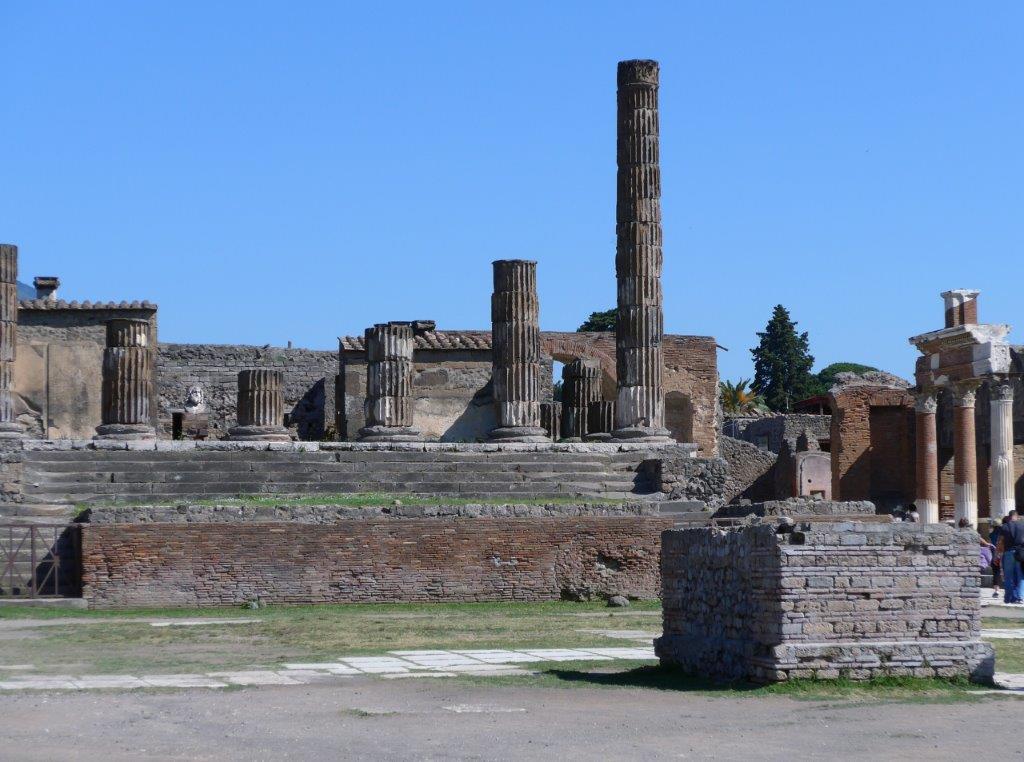 General view of part of the site. 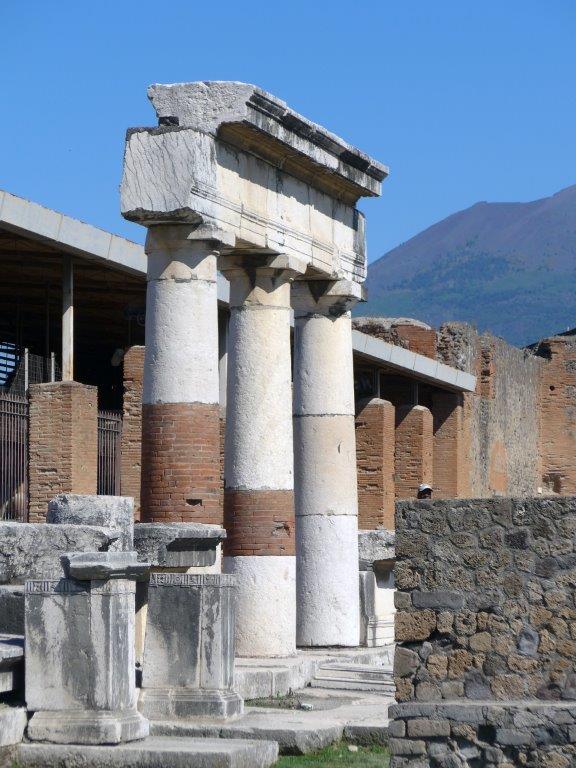 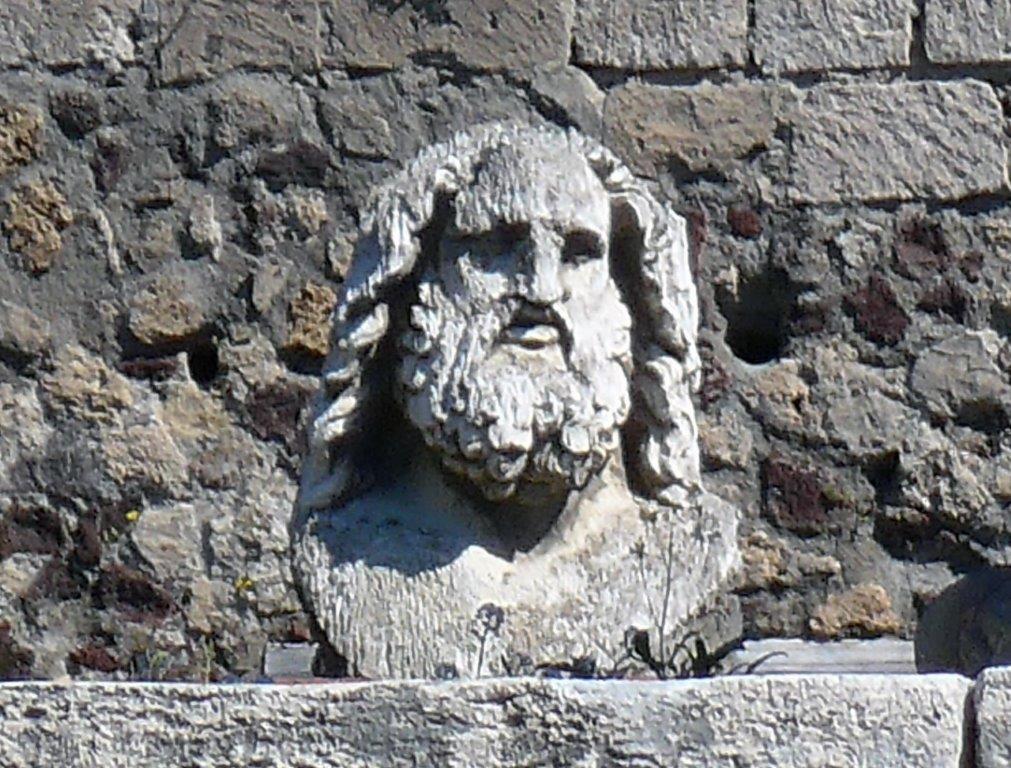 An excavated sculptured head.
A visitor to Pompeii can see the layout of the city and many of the physical facilities available to the inhabitants, such as the public baths and the communal public toilets.  The popularity of bread as a staple food in the diet is evidenced by large numbers of bakeries in some of which blackened loaves, almost two thousand years old, have been found in the ruins of ovens.  There are millstones which had been used by bakers to mill their own grain. 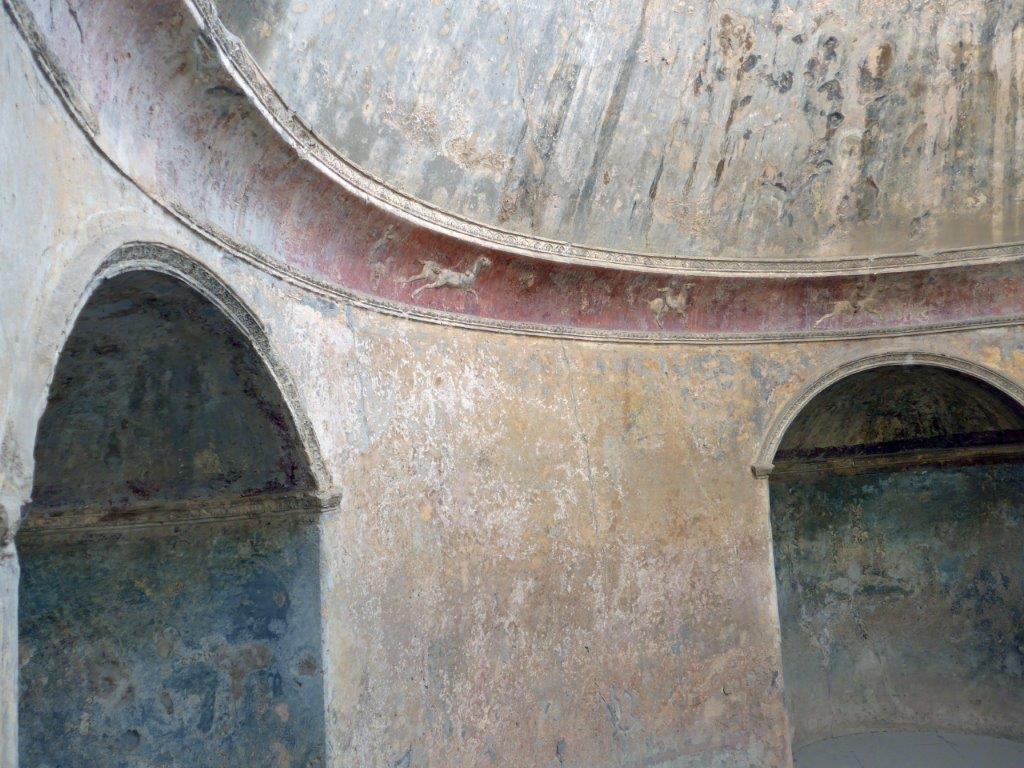 A corner of the ceiling of a bathhouse. 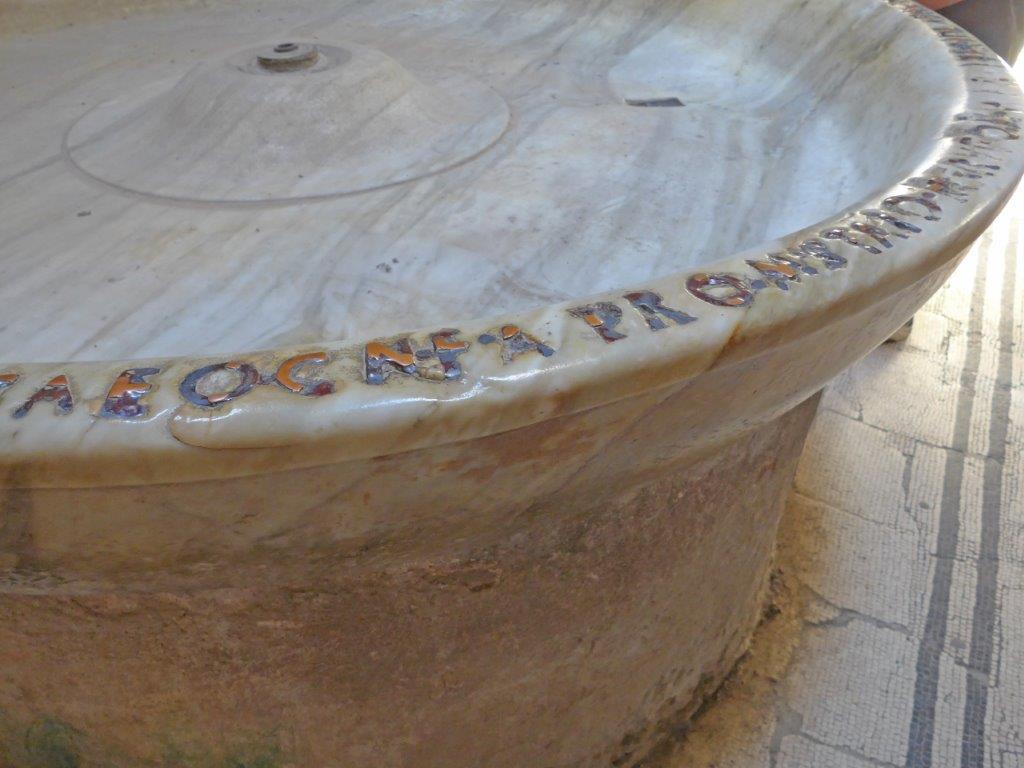 A water fountain in the bathhouse. 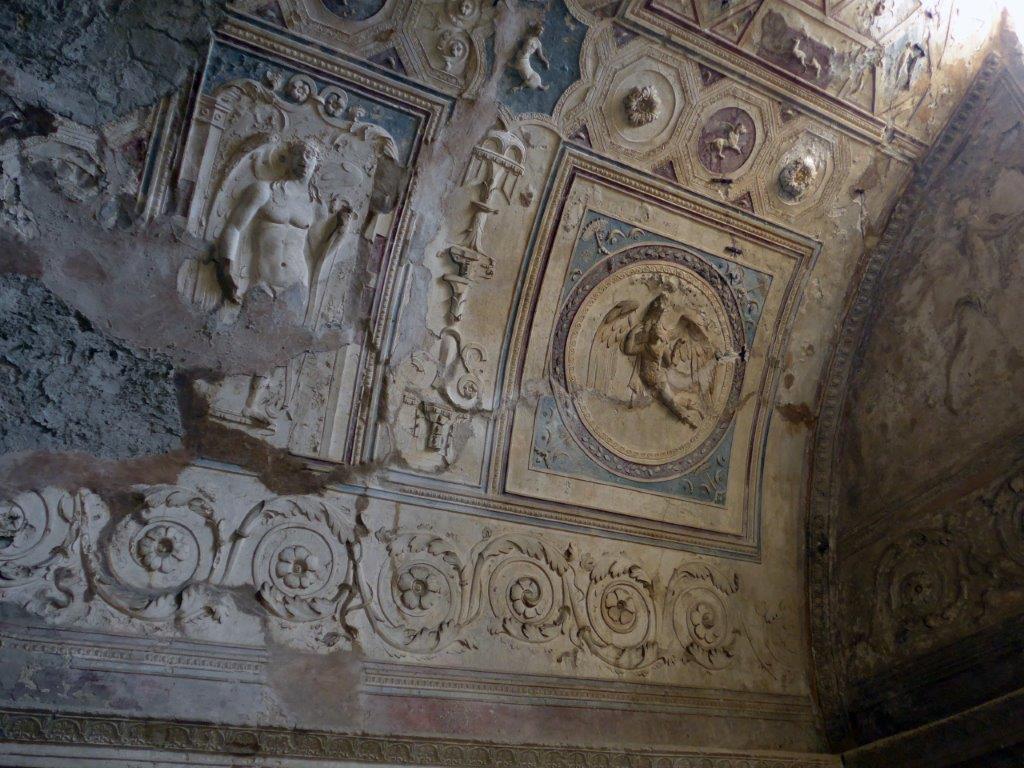 A decorative feature in the bathhouse.
The layout of private residences can be seen and the many beautiful frescoes which have been preserved shed light on the art techniques and styles used in ancient Rome. 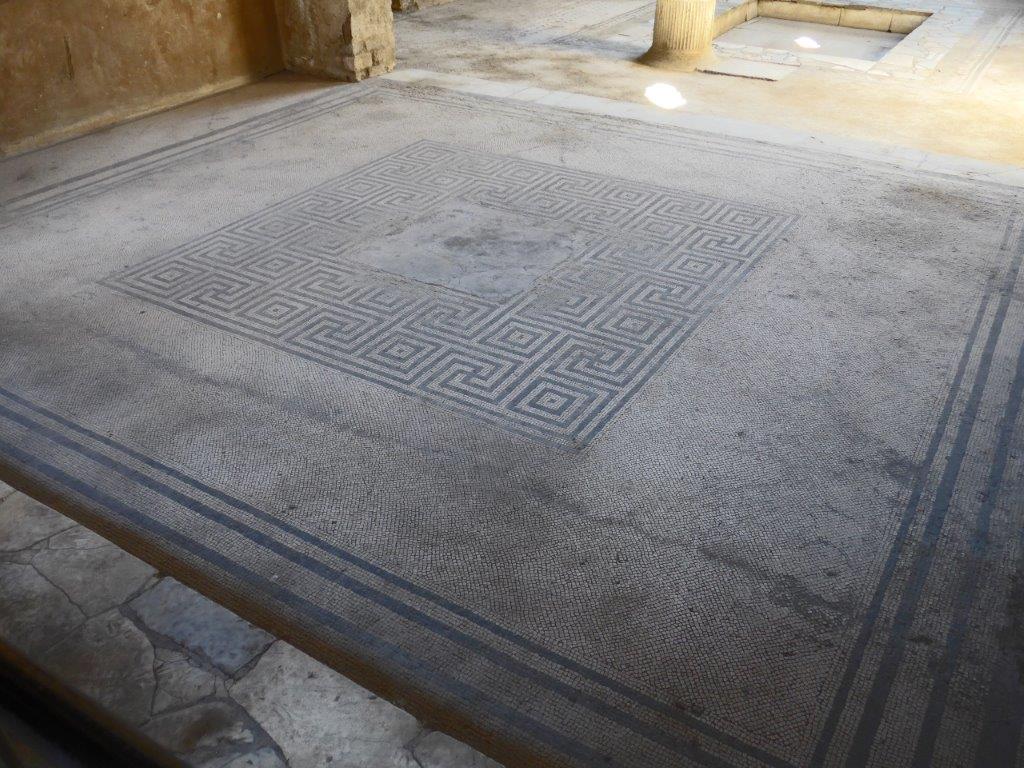 Mosaic floor in a home. 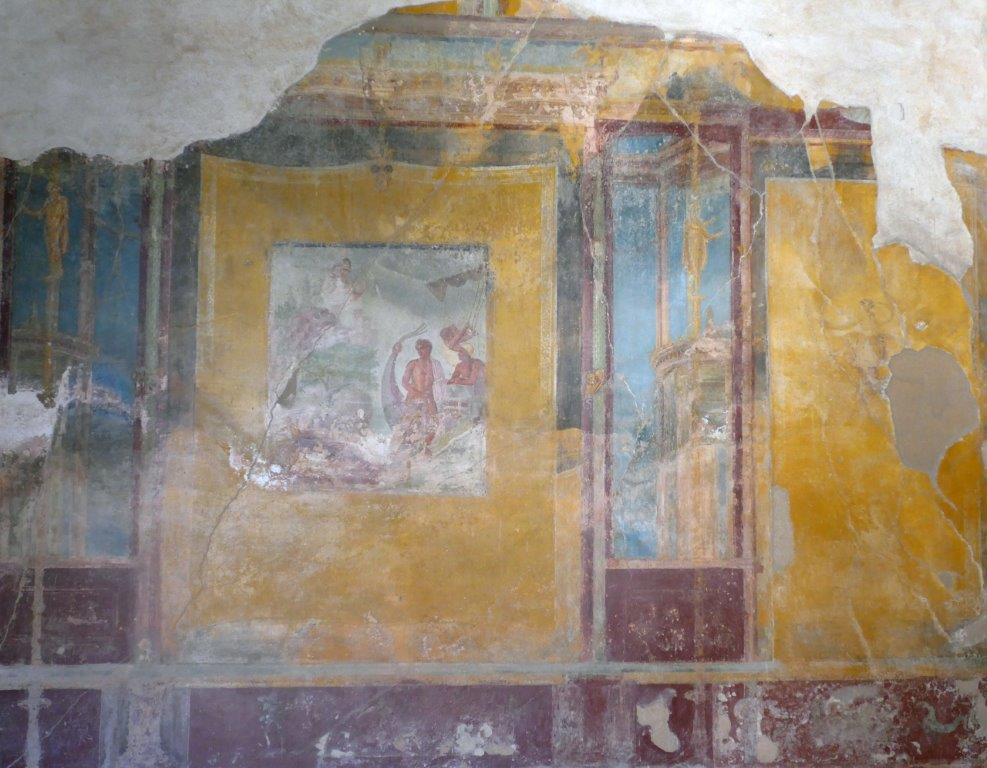 Wall fresco in a home.
However, what some visitors find disappointing is the absence of displays of items such as coins, jewellery, household items, pottery, statues and the like discovered during  excavations,  which would have added perspective in imagining life in Pompeii. These items are now in museums, primarily in Naples and in particular the Superintendenza Speciale per i Beni Archeologici di Napoli e Pompei.
Items from the above museum were on display in Sydney for a few months earlier this year at the Australian National Maritime Museum in an Exhibition entitled Escape from Pompeii – the untold Roman rescue. 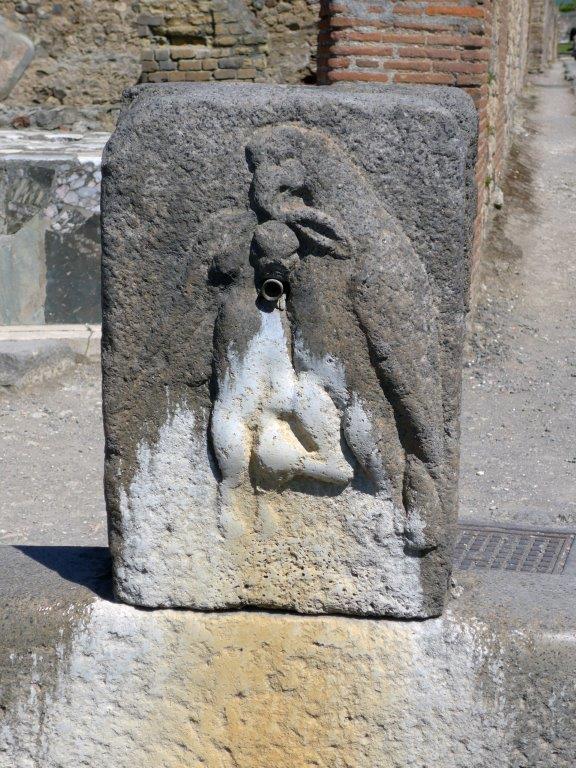 Water spout above a water tank in a bakery. 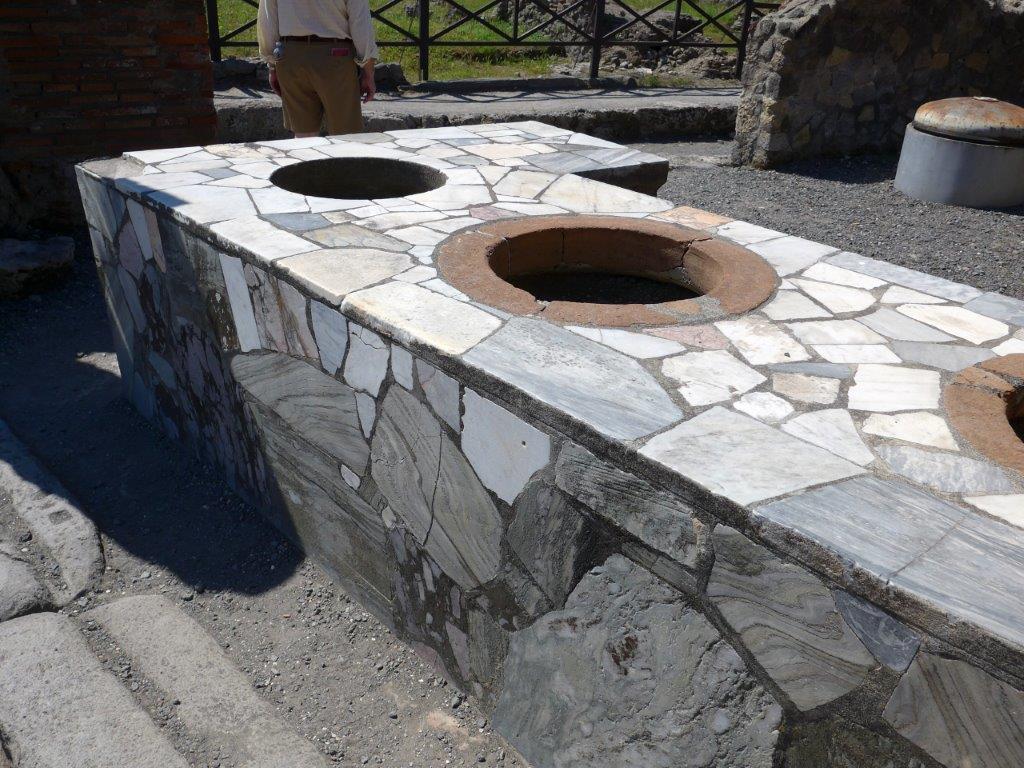 Work table in a kitchen. 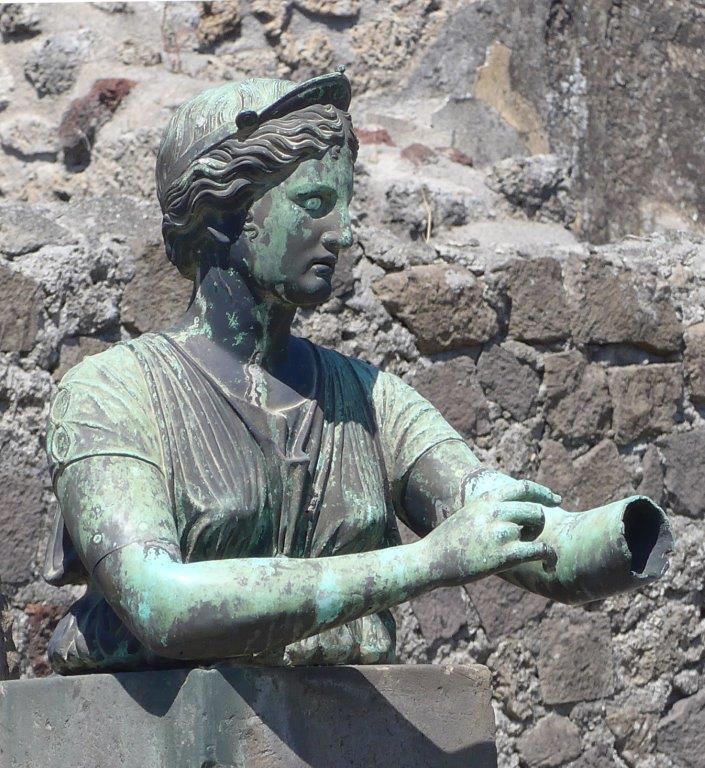 Bust statue of a female.
(Photographs at the site of the excavations of Pompeii included with this article were taken by George Repin in 2014.) 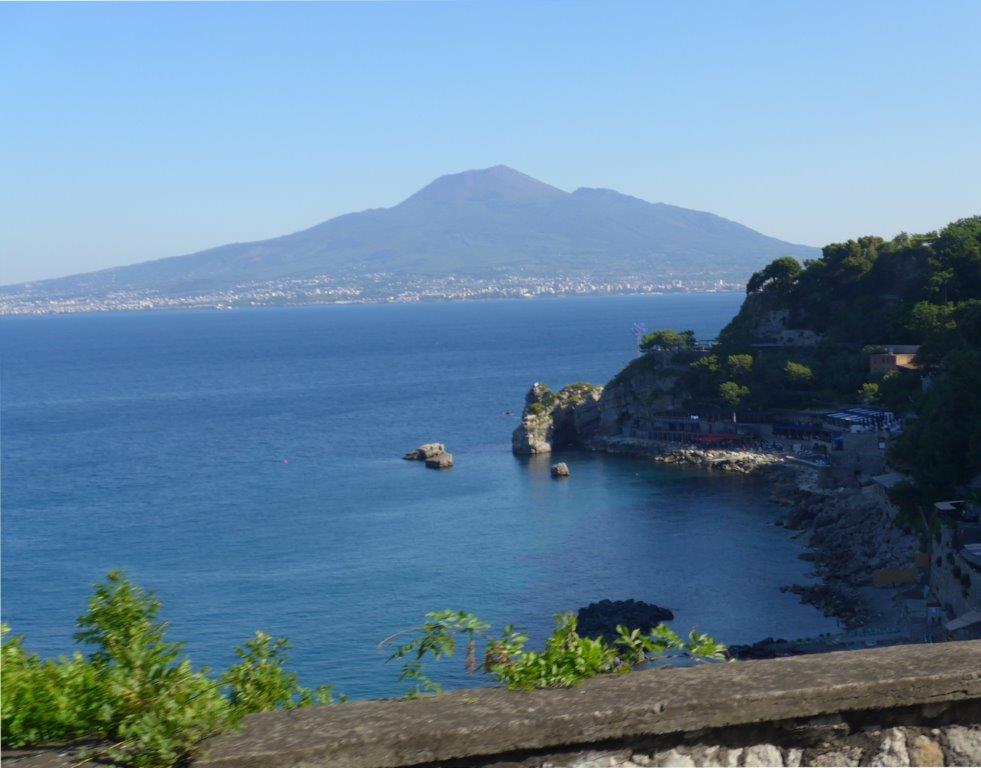 Mount Vesuvius seen across the Bay of Naples from Sorrento.