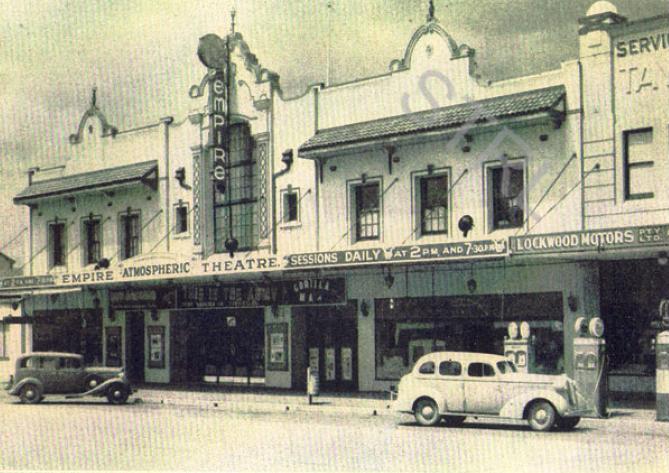 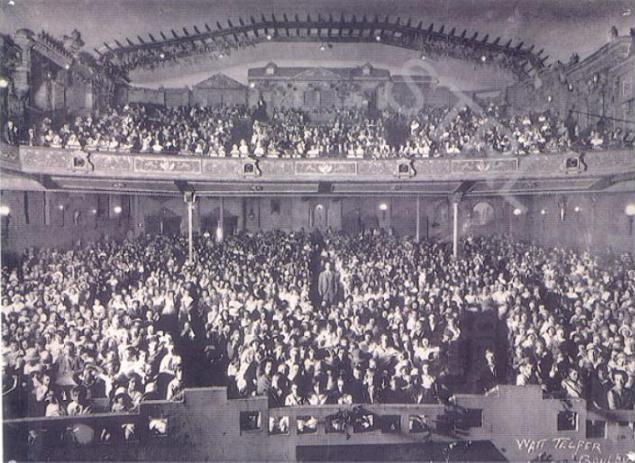 Above: Image No.5455. Interior view showing audience and detail of decorative features. 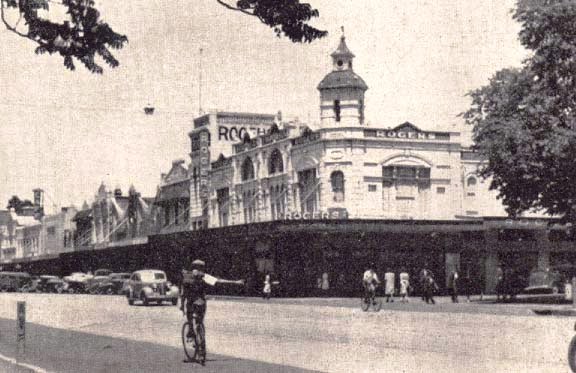 A STOP ON THE ROAD TO CANBERRA
by George Repin

Once you are past Liverpool driving from Sydney to Canberra takes only three hours.  There is no need to stop for a meal on the way.  It was very different in the thirties, forties and fifties when, the Hume and Federal Highways for much of the way consisted of a single lane in each direction.  The Hume wound up over the Razorback Mountain, past a large oak tree just like the trade mark of the, now long gone, Anthony Horderns department store, and down to Camden.  The road went on to Picton and then through every township, some with very vigilant policemen, so drivers slowed down to 30 m.p.h.  The Federal Highway, after passing through Collector, meandered around Lake George.  It was a slow trip of five or six hours depending on the traffic and the weather, and it was usual to stop on the way to eat.

The most popular town for a break was the thriving railway centre of Goulburn.  The “Queen City of the South” was surrounded by rich pastoral land and was home to factories making boots and chenille. Kenmore Hospital was nearby.

In its heyday Goulburn boasted near to a dozen cafes, milk bars and fish shops, most of them run by Greeks. The best known, not only in the town but throughout New South Wales, was the Paragon Café, which Steve and June Karangis transformed into a restaurant when they bought it in the mid 1940’s. In addition to the usual standbys of steak or chops with fried egg, chips and salad, the Karangis offered fresh fish, prawns and lobsters delivered daily from the Sydney Fish Markets.

An earlier arrival in Goulburn was Jack Raftos (whose real name, Xenophon Raftopoulos, was too difficult for the locals).  He came to Australia from Ithaca in 1906 and to Goulburn in about 1930.  His shop, The Empire Lounge, was part of the Empire Theatre complex, a magnificent building whose outfitting and decoration, some thought, surpassed that of Sydney theatres such as the State and the Regent.  Initially an elegant Tea Room with small marble-topped tables and wrought iron chairs, the Empire Lounge underwent a series of changes, responding to trends in café and restaurant design.  When a gleaming soda fountain was installed in the 1930’s and loges replaced the tables and chairs it became a meeting place during the day for members of local cricket, football and tennis clubs enjoying milk shakes, double malteds, ice cream sodas, parfaits, banana splits and ice cream sundaes.  In the evenings the cinema crowd chose coffee.  During World War II, an army camp was established nearby and the ambience changed again when meals, predominantly grills, were introduced.

Helen Chrissonopoulos, one of Jack Raftos’ daughters who spent her childhood in Goulburn, recalls that before the advent of regular air services politicians travelling between Sydney and Canberra by road stopped to eat in Goulburn.  She remembers Menzies (1) bouncing her on his knee and telling her never to forget her Greek heritage, and the enormous patience of Billy Hughes’ wife in the face of her husband’s occasional difficult behaviour. Hughes (2) insisted that his meal be served before that of his entourage and then he wanted to move on before his staff had finished theirs. Her recollections of John Curtin (3) and Ben Chifley (4) are of quiet, pleasant, modest men.

Jack Raftos moved to Sydney in 1950, opening a milk bar in King Street between Pitt and George Streets.  He died in 1968.