In 1946 Sydney, a city of a million and a half, had little in the way of professional theatres - the Theatre Royal mostly showing musical shows and occasionally ballet or latter-day American comedy, the Tivoli given over almost entirely to vaudeville, and the Minerva Theatre in Kings Cross.  A few ambitious amateur and semi-professional groups struggled, with insufficient means, to bring to the stage the plays of modern authors and many of the classics, relying on the enthusiasm of their actors and small loyal audiences.  They included May Hollingworth’s Metropolitan Theatre in Reiby Place near the Quay, Doris Fitton’s Independent Theatre in Miller Street, North Sydney, Bryant’s Playhouse (the Little Theatre) in Phillips Street, and the New Theatre whose plays were almost invariably left wing. In addition the Sydney University Dramatic Society gave the opportunity for many students, later well known actors on radio and in films, to develop their skills.

With the aim of filling an obvious gap Sydney John Kay, musician and composer, Peter Finch, actor, John Wiltshire, producer and Allan Ashbolt a writer and actor on radio formed Mercury Theatres Pty Ltd with the view to establishing their own playhouse, forming a permanent Stock Company and building up a regular repertoire ranging from classic drama to plays of the present day.  As Allan Ashbolt said at the time “Ultimately, our intention is to demonstrate that the theatre is something more than a useful training ground for the cinema ….. and to show that acting is, as Voltaire said ‘the rarest, the most difficult and the most beautiful of the arts’”.

Sydney John Kay, born Kurt Kaiser in Leipzig, was in Sydney with the musical group the Weintraub Syncopators when World War II broke out.  He stayed and went on the make a career in Australia.

Peter Finch, after serving in the Middle East with an artillery unit and later as producer of the Army Theatre, was thirty when the Mercury Theatre was formed.  He was a brilliant, sensitive actor on stage, radio and film and went on to an outstanding acting career overseas when Laurence Olivier offered him a contract in England after he and Vivien Leigh, in 1948, saw him in a Mercury Mobile Players performance of Moliere’s The Imaginary Invalid. 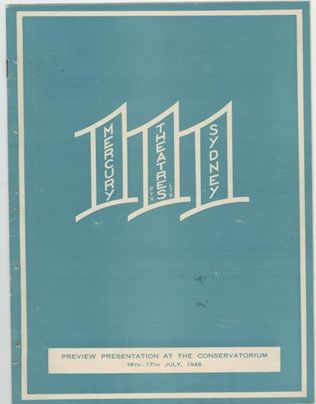 The founders of the Mercury Theatre attracted enthusiastic support from cultural leaders.  People associated with their preview presentation of three one-act plays at the Sydney Conservatorium of Music on 16-17 July, 1946 included William Constable who designed the sets and costumes, William Dobell who undertook research for the set of “The Broken Pitcher” but had to withdraw from the project, Margaret Olley who painted the sets, and Alfred Hill who composed an overture for The Broken Pitcher. Kay himself composed overtures for the other two plays.

The plays performed were Diamond Cuts Diamond by Nicolai Gogol, The Pastrycook by Lope de Vega, and The Broken Pitcher by Heinrich von Kleist.

Press reports the next day were very favourable:

Sydney Sun .... first rate performance, enthusiastically received by a packed house….This is an event of great importance in the progress of the theatre in Australia.

However, because a suitable theatre could not be found the Mercury Mobile Players were formed. Kay designed a folding stage which could be carried on a truck and the company took classic comedy plays to factories, schools, hospitals and public halls. The company ceased operations in 1949 when Peter Finch went to London.

A Mercury Club was formed in September 1946 to bring together friends of live theatre and the artists, on the model of the Vic-Wells Association (then supporting the “Old Vic” and “Sadlers Wells” in London).  June Wimble was the first Honorary Secretary. Lectures, play readings and private performances were held but support waned as hopes raised by the Mercury Theatre were disappointed.  The Club was disbanded in September 1948.