Alcohol in Restaurants before 1955
By George Repin

People in restaurants and coffee lounges enjoying a glass of wine with their meal today probably have no idea of the limitations which applied, until the 1950’s, to the service of alcoholic beverages.

Restaurants with liquor permits were severely restricted. They could serve only “light wines” and “malted liquors” which could be “served only in a sealed bottle at the table at which the purchaser is seated and … opened in his presence”.  The civilised   practice, long established in Europe, of being able to have a single glass of wine with a meal was totally prohibited. No other alcoholic drinks, such as spirits, fortified wines or cocktails were permissible.  Restrictions also applied to the design of restaurants with liquor permits. For example, they had to have at least 50 seats, which had to be individual chairs not loge or bench type seating – presumably for fear of what people might get up to if “inflamed” by alcohol.

A “meal” was strictly defined in the liquor laws as being “…of at least two courses at which the persons partaking thereof are seated at a table, and one course of such meal shall consist of fish or meats, other than in sandwich form, and cooked vegetables.”  Salads did not comply and bad luck for the vegetarian.

In the evenings, unless it was convenient to eat between 6 pm and 9.30 pm service of a drink was unlawful.

Needless to say such restrictions severely impacted upon the popular night clubs such as the “glitzy” Celebrity Club (run by Joe Taylor) in the city, the atmospheric Carl Thomas’ in a former wool store in Macquarie Street with a fine outlook over Sydney Cove and The Roosevelt (run by Sammy Lee) at Kings Cross.

Various devices were adopted to circumvent the law.  Some night clubs and larger restaurants invited patrons to place orders for their liquor requirements no later than 5.30pm on the day of their proposed visit.  The establishment then purported to buy the patrons’ requirements before the hotels closed at 6pm and make them available to them when they ate. It some cases the liquor, in fact, was provided from supplies held by the establishment and sold illegally at highly inflated prices.  Other restaurants with an established, regular clientele invited patrons to place orders with them, in writing, for their future requirements which would be held in individual lockers accessible when the patron visited. In some cases the number and volume of such “lockers” was greater than the area of the restaurant in which they were purported to be held.  The extent of the illegal supply of liquor in restaurants - “sly grog” – was disclosed in evidence during the Royal Commission of 1953-1954. 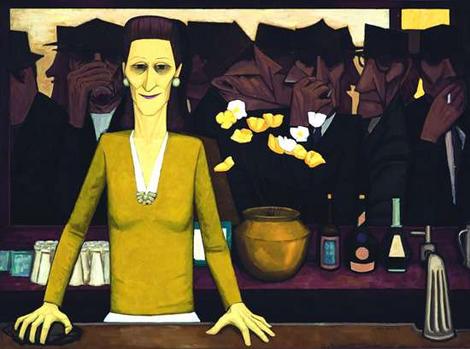 Conditions for drinking in hotel bars were characterised by the expression “the 6 o’clock swill”.  Even in up market hotels such as Ushers and The Carlton in Castlereagh Street the bars were packed before 6 pm when the hotel doors were closed in accordance with the law and service stopped. Men jostled to buy and line up on the bar glasses of beer before 6 o’clock to drink in the twenty minutes before the call “Time gents please” emptied the bars at 6.20pm – again according to the law.

Major changes flowed from the Royal Commission into the Liquor Industry.

In 1951, because of great abuses in the liquor trade and extensive corruption in the policing of the liquor laws, a Royal Commission was established by the N.S.W State Government.  It was conducted by Mr Justice Allan Victor Maxwell. After 140 days of public hearings, the examination of 411 witnesses and the receipt of 109 pieces of written evidence the Commissioner’s report was released in February, 1954, with significant findings and recommendations.

Inter alia, the Commission concluded that “there can be no doubt upon the evidence that in the metropolitan area conditions associated with six o’clock closing are deplorable; apart from any other consideration, a refusal to attempt some reform involved in my opinion, the conscious perpetuation of a clearly established evil; in addition the present closing hour encourages sly grog and after-hour trading at ‘Black Market’ rates.”

While the Report mainly addressed issues not related to restaurants, subsequent action to amend the Liquor Act gave the Caterers’ and Restaurant Keepers’ Association the opportunity to press for the changes it had long been advocating.  Amendments drafted by the Association, dealing with the service of alcohol in restaurants, night clubs and catering establishments, were submitted to the Minister of Justice by a delegation in June, 1954.  They covered matters such as trading hours, type of  food served, service of aperitifs, spirits and wines by the glass, and the provision of bars in restaurants where customers could have a drink before sitting down for their meal.

The Liquor (Amendment) Bill introduced in the Legislative Assembly on 1 December, 1954 was a historic sensible step towards allowing the people of N.S.W to enjoy drinks, served in a civilised way, with meals in restaurants.

Further changes were to come in later years but the first big move away from the bad old days had begun.

Images: Description: The Bar, a painting by John Brack in 1954. Shows the phenomenon of the six o'clock swill.