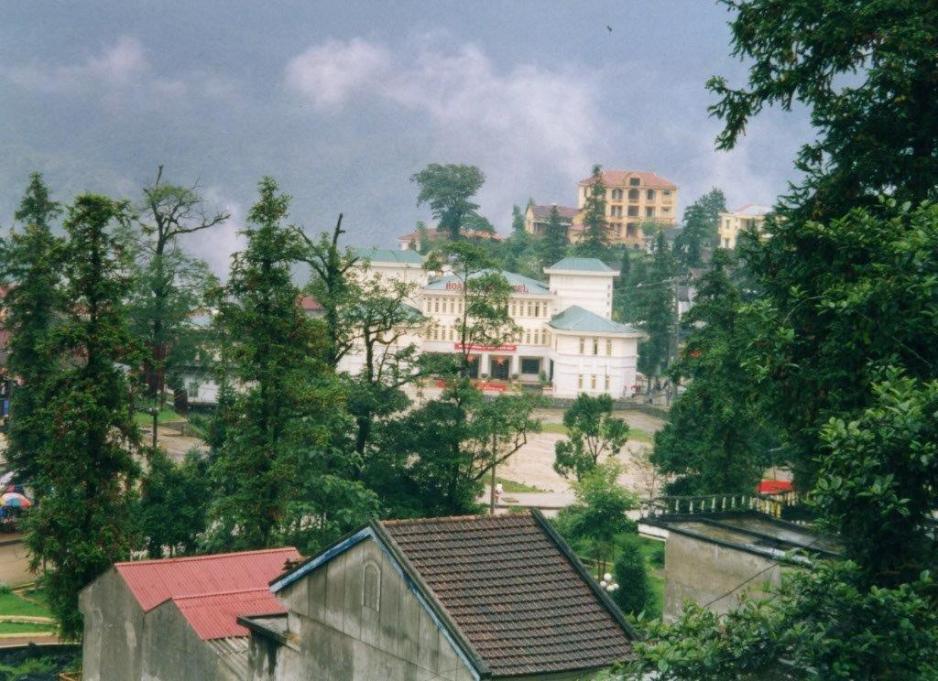 For visitors the premier destination in the province is the hill-station, and now market town,  Sapa in a valley dominated by the Hoang Lien Son Mountains and the highest mountain in Vietnam, Mt. Fansipan (3,143m.).  Sapa is the gateway to the cultures of the minority hill people living in the Lao Cai valley. 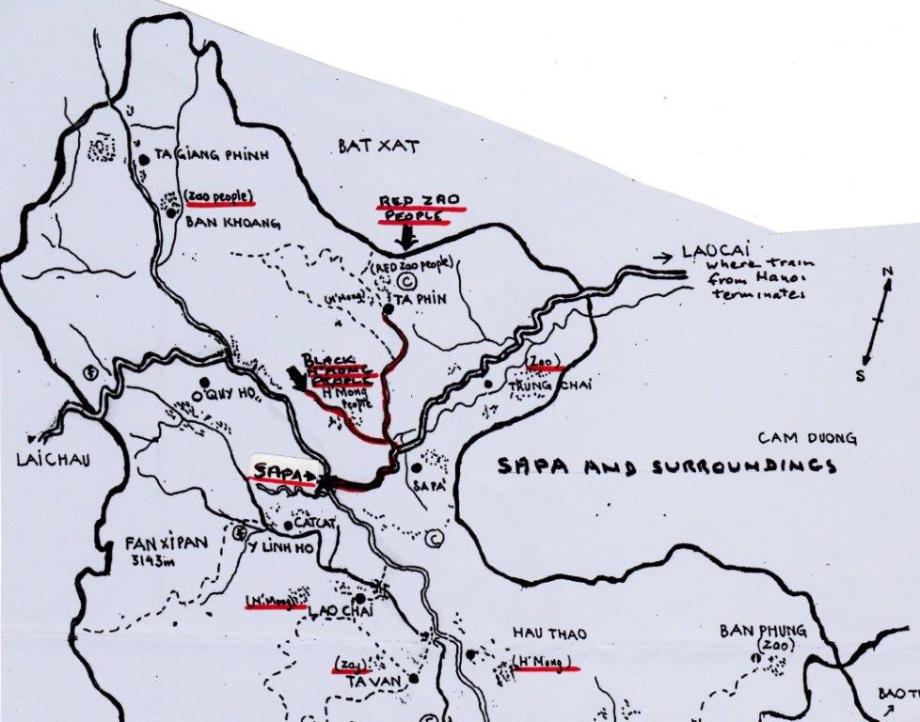 Although military parties and missionaries first visited the area in the 1860s it was not until 1909 that the first permanent civilian resident settled in Sapa, attracted by the seasonal climate so different from that on the coast at Hanoi - subtropical in summer (up to 29°C. in May/June) and coldest in December when the temperature may drop to 1°C. The attractive continental climate resulted, by 1912, in the establishment of a military sanitarium for army officers and, from the 1920s, wealthy professionals starting to build private villas to escape from the trying summer heat on the coast.

Sapa can be reached in several ways but the simplest is by overnight train from Hanoi – a journey of 9 hours arriving at the station at Lao Cai at about 5am – followed by minibus or other vehicle up the winding road to Sapa.

Sapa is not only attractive in itself but is also the main market town in the area. 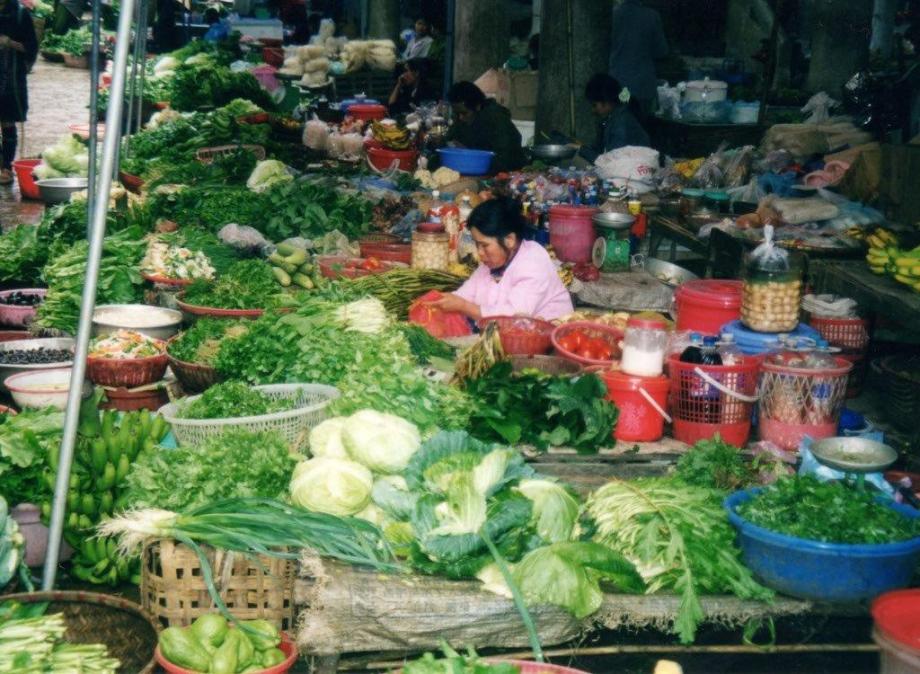 Vegetables at the Sapa Markets 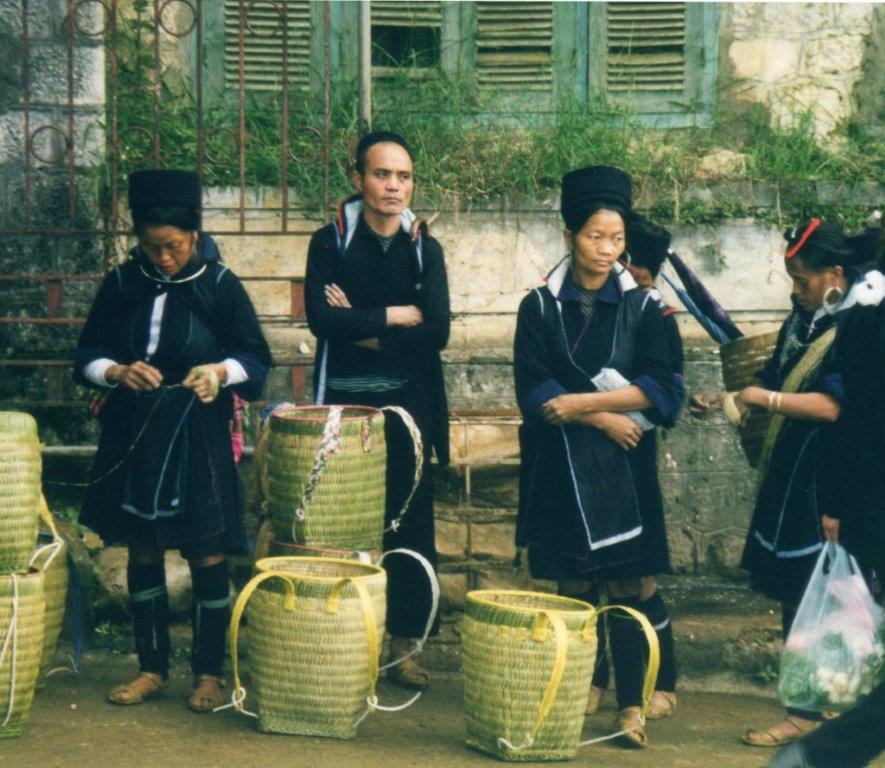 H'mong people at the Sapa Markets 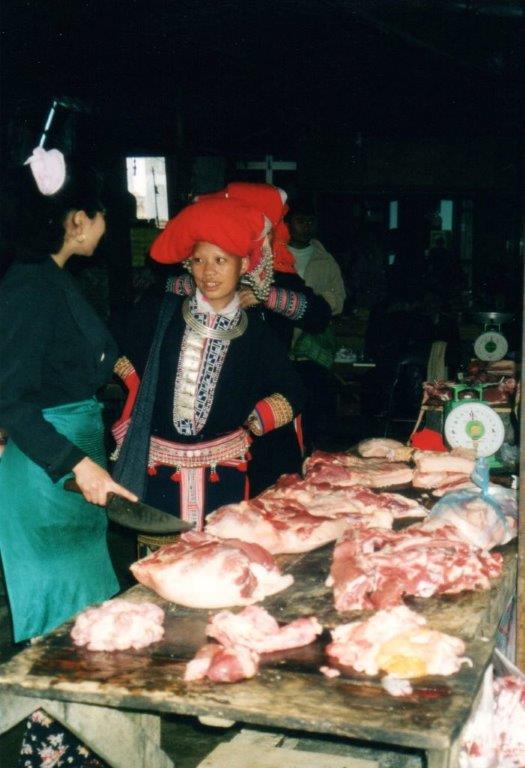 The people of the Lao Cai Valley make up a mosaic of ethnic groups – a variety of peoples, some unique to Vietnam - in a relatively small area.  They each have their own cultures and traditions. Cultural wealth reflects the diversity of the landscape and the land available for farming.  The cascading rice terraces spilling down the mountains are an obvious feature.

The highlands have been a refuge for some ethnic people during political unrest and persecution in other places.

H’mong are widely distributed in the mountainous regions of China, Laos, Thailand and Vietnam, however because of their many subcultural divisions there is controversy over their nomenclature.  There are several sub-groups in Vietnam.  The H’mong Leng are the most numerous in the Sapa area. They are often referred to as Black H’mong (although this is not a name they prefer) and are easily recognised by their costume.  They wear hemp clothes dyed with natural (black-blue) indigo.  The women wear stiff indigo-blue turbans over their hair gathered in a bun.

The H’mong live in a traditional agrarian economy based on family farms, raising pigs, chickens, buffaloes and horses – with food crops (rice, corn, manioc) and cash crops (cardamom and vegetables).

The Dao, also known as the Zao, and which for centuries were known in south-west China as the Man or Yao, like the H’mong, build terraced paddy-fields irrigated by a sophisticated system of canals. They also raise pigs and breed horses. 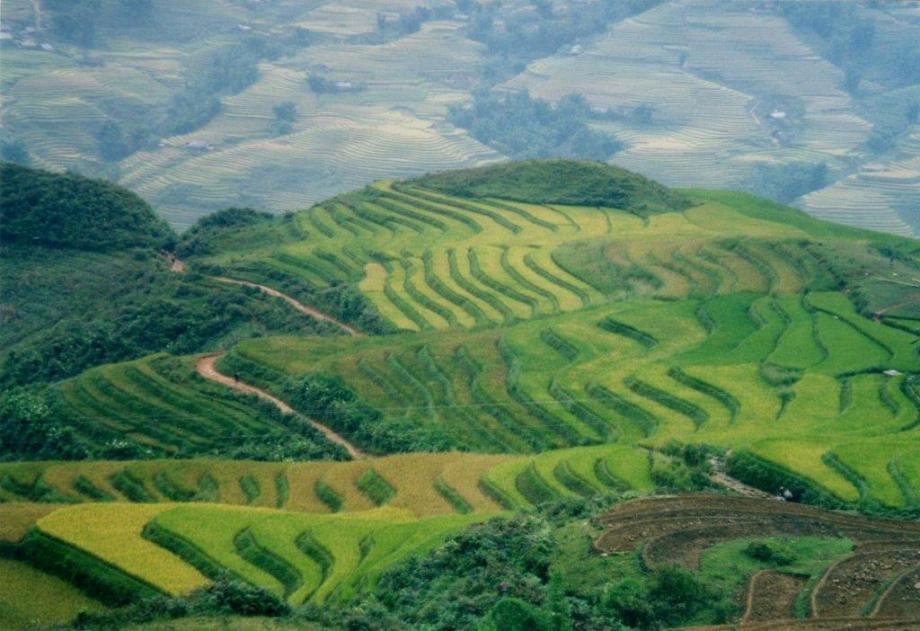 Rice terraces by the roadside 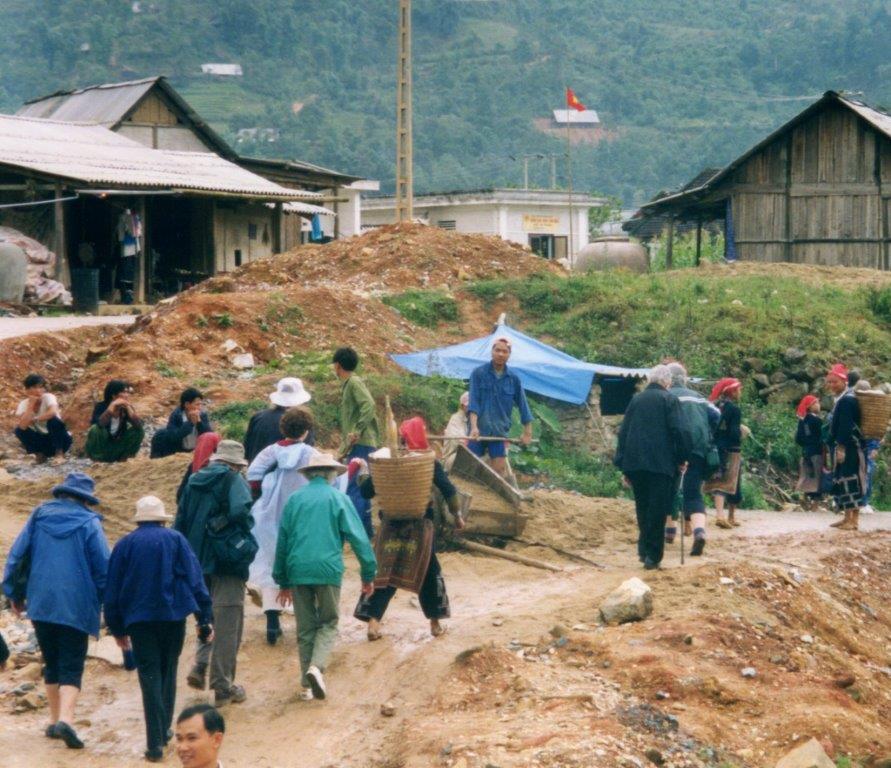 Walking in to a Dao village

All the Dao groups in the Lao Cai Province wear red head-dresses or red pieces of clothing.  The head-dress varies between groups – some are totally red and flat, adorned with silver coins.  Others are cone-shaped while others are red turbans enhanced with red and pink wool and silver threads. 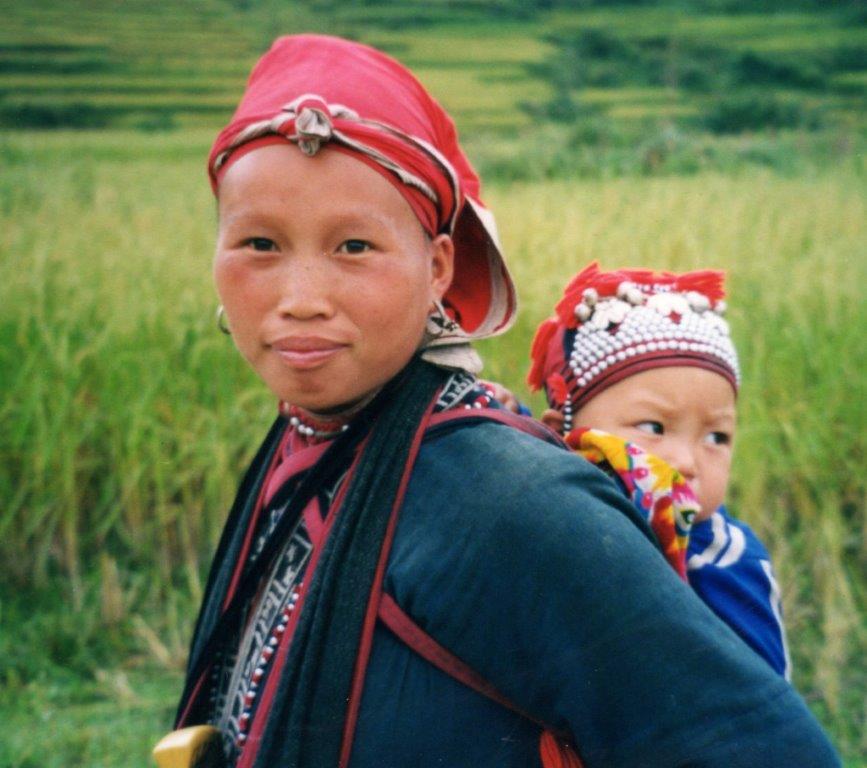 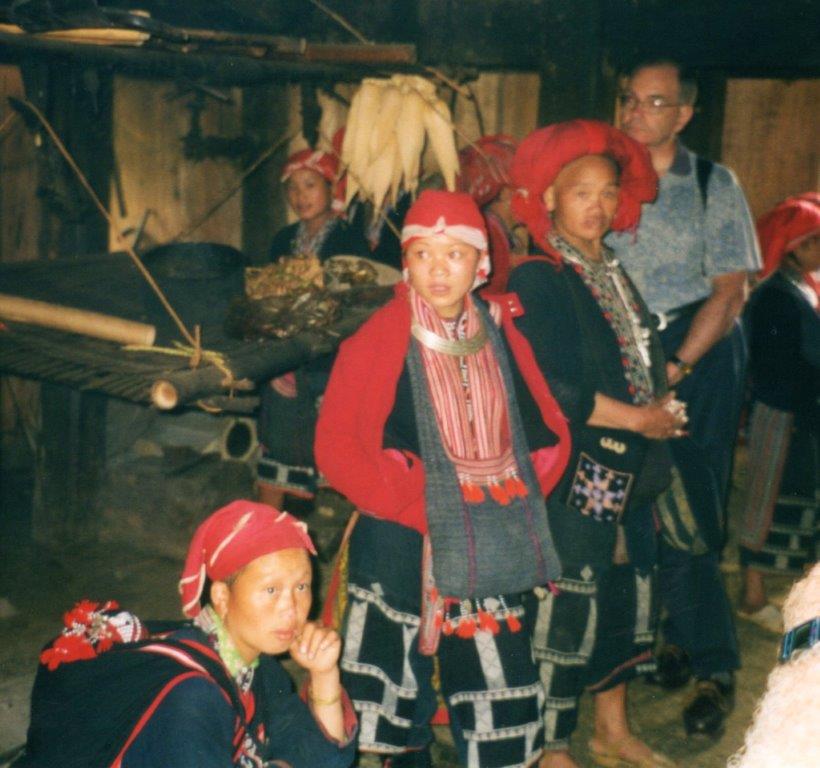 Inside a Dao dwelling

Sapa and the Lao Cai Valley are now firmly established on the European and North American package tour circuit, and well equipped trekkers are a common sight around the town. This is a dramatic change in just a few years from the time when foreign visitors were few and far between. 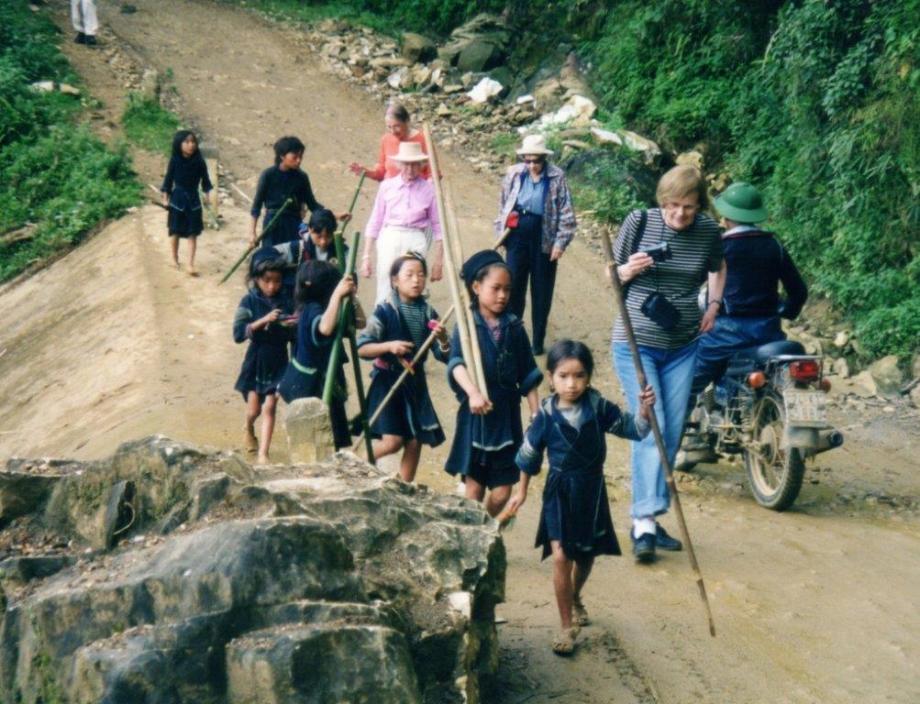 H'mong children meeting us on approach to their village 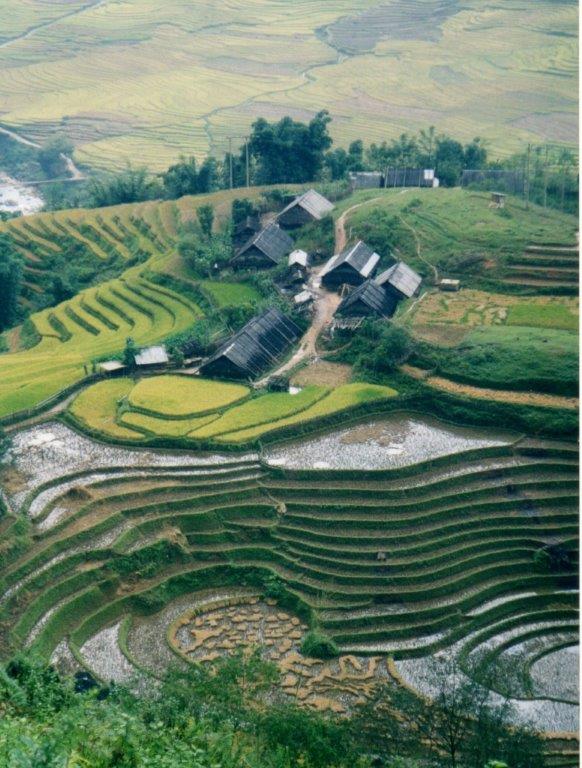 Farm in the valley with rice terraces

Photographs by George Repin in October 2002.

The Nineteen Thirties  Remembering Rowe Street  The Sydney Push  Saturday Night at the Movies  Shooting Through Like A Bondi Tram  A Stop On The Road To Canberra  City Department Stores - Gone and Mostly Forgotten  An Australian Icon - thanks to Billy Hughes  Crossing The Pacific in the 1930s  Hill End  The Paragon at Katoomba  Seafood In Sydney  How Far From Sydney?  Cockatoo Island Over The Years  The Seagull at the Melbourne Festival in 1991  Busby's Bore  The Trocadero In Sydney  Cahill's restaurants  Medical Pioneers in Australian Wine Making  Pedal Power and the Royal Flying Doctor Service  Pambula and the Charles Darwin Connection  Gloucester and the Barrington Tops  A Millenium Apart  Have You Stopped to Look?  Gulgong  Il Porcellino Olympia  Durham Hall  Sargent's Tea Rooms Pie Shops and Street Photographers The Ballet Russes and Their Friends in Australia  Hotels at Bondi  Alma Ata Conference - 1978 Keukenhof - 1954 The Lands Department Building and Yellowblock Sandstone  The Goroka Show - 1958  A Gem On The Quay  Staffa  The Matson Line and Keepsake Menus Kokeshi Dolls  The Coal Mine At Balmain  The Hyde Park Barracks  The Changing Faces Of Sydney From Pounds and Pence to Dollars and Cents Nell Tritton and Alexander Kerensky  Making A Difference In Ethiopia William Balmain  J C Bendrodt and Princes Restaurant Azzalin Orlando Romano and Romano's Restaurant  Waldheim  Alcohol in Restaurants Before 1955  King Island Kelp  The Mercury Theatre  Around Angkor - 1963  Angkor Wat 1963  Costumes From the Ballets Russe Clifton at Kirribilli  Chairman Mao's Personal Physician  The Toby Tavern The MoKa at Kings Cross The Oceaographic  Museum in Monaco  The Island of Elba Russian Fairy Tale Plates Meteora Souda Bay War Cemetery Barrow, Alaska Cloisonné Tripitaka Koreana Minshuku The Third Man Photographs and Memories Not A Chagall! Did You Listen? Did You Ask?Napier (Ahuriri, Maori) New Zealand Borobudur  Ggantija Temples Plumes and Pearlshells Murano  University of Padua Ancient Puebloe Peoples - The Anasazi  Pula  The Gondolas of Venice Cinque Terre  Visiting the Iban David The Living Desert Bryce Canyon National Park  Aphrodisias  The Divine Comedy Caodaism