The Cathedral of St. James – sometimes mistakenly known as St. Jacob’s – a basilica with three naves, three apses and a dome - is the most important architectural monument of the Renaissance in Croatia. It was listed on the UNESCO World Heritage List in 2000.

It is located in Šibenik, a historic town in central Dalmatia where the River KrKa flows into the Adriatic Sea. While other cities along the Adriatic Coast were founded by Greeks, Illyrians or Romans Šibenik is unusual because it was founded by Croats – although there is some evidence that there were other inhabitants in the area before the Croats arrived.  It was first mentioned under its present name in 1066 and for a time was a seat of the Croatian King Peter Krešimir IV.  Even now it is sometimes called “Krešimirov grad” (Krešimirov’s city).  It is the oldest native Croatian town on the eastern shore of the Adriatic Sea.

Over the centuries it was under the authority, at various times, of Venice, Byzantium, Hungary, the Kingdom of Bosnia, the Hapsburg Monarchy and the Kingdom of Italy.  During World War II it was occupied by Fascist Italy and Nazi Germany. After the war it became a part of Yugoslavia, until Croatia declared independence in 1991.

Attacks by the Yugoslav National Army and Serbian paramilitary forces during the Croatian War of Independence (1991-1995) damaged many buildings and monuments, including the dome and the roof of the Cathedral of St. James.  Damaged areas of the Cathedral and the city have since been repaired.

Although planning for the construction of the Cathedral of St James had begun in 1298 it was not until 1431 that actual building work started.  It was built in three stages and was completed in 1536.

The Cathedral is constructed entirely of stone with limestone from a nearby quarry and marble from the island of Brač. 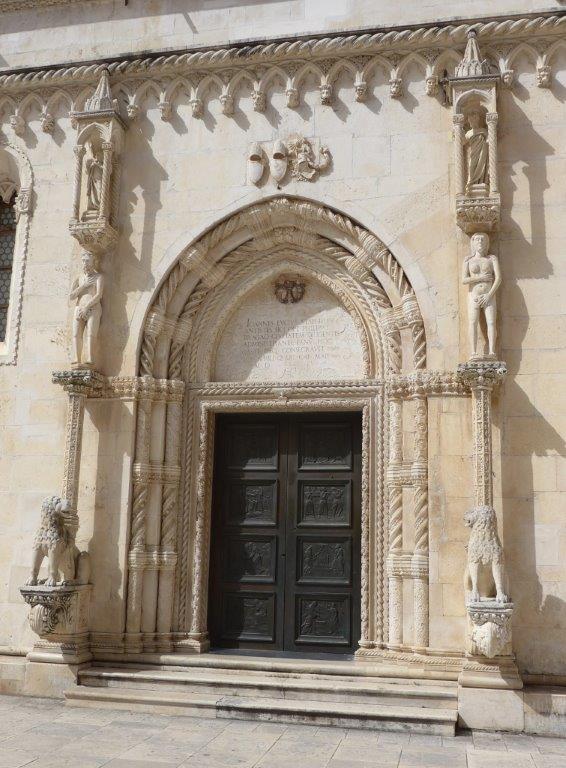 Side entrance from the adjoining square - flanked by statues of Adam and Eve on columns supported by lions.

Because of slow progress in the early stages of construction Giorgio da Sebenico was invited to come from Venice.  He directed the construction in Renaissance style from 1441, certainly until 1473 and probably until his death in 1475.

He was succeeded by Nicolò di Giovanni Florentino from the Donatello School of Sculpture who continued the building in Tuscan Renaissance style from 1475 to 1505. He was responsible for the barrel roof made up of enormous interlocking stone slabs.  The roof was considered a marvel of construction at the time. 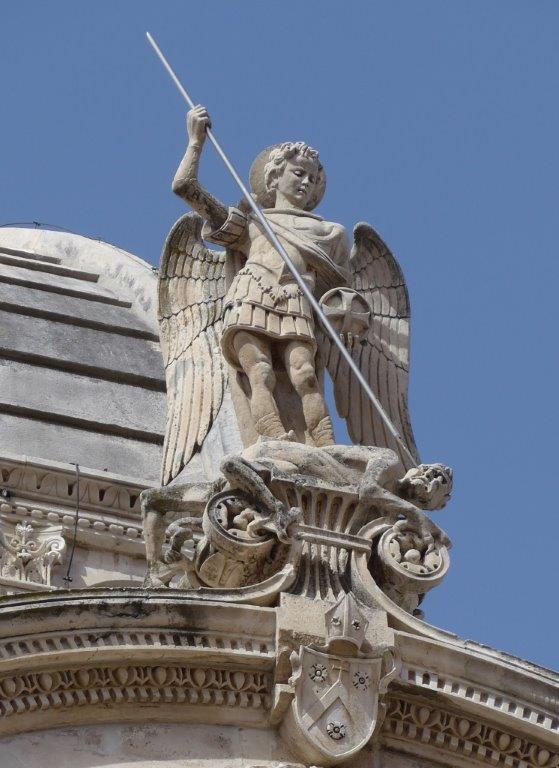 Winged angel with spear - on the roof above the side entrance.

After the death of Florentino two craftsmen, Bartolomeo of Mestra and his son Jacob, completed the building in 1536 following Nicolò’s instructions.  In the following nineteen years many Venetian and local craftsmen worked on the interior in Gothic style before the Cathedral was consecrated in 1555.

An interesting feature of the building are rows of sculptured heads on the outside wall, believed to be images of the procurators who arranged the finances for the construction work.  They are anonymous.  There are also occasional heads of animals. 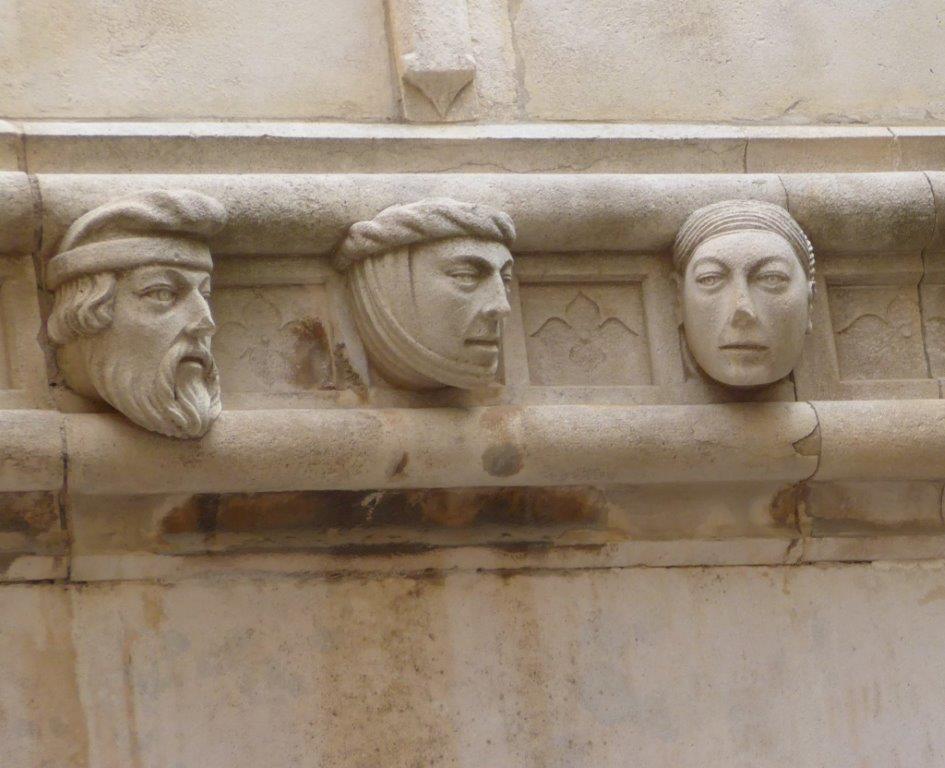 Sculptured heads on the façade of some procurators. 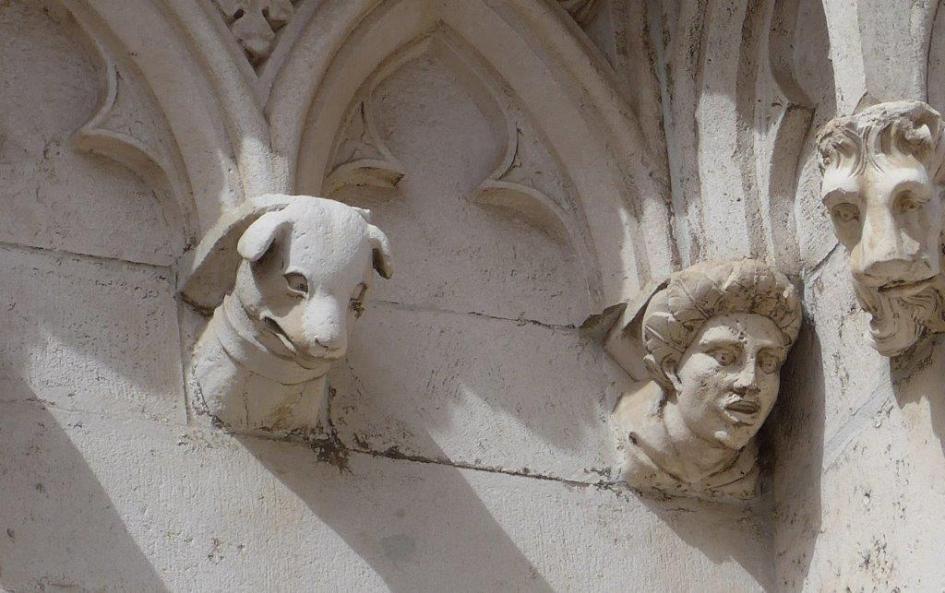 One of the animal heads on the facade.

The baptistery under the cathedral, designed by Giorgio da Sebenico, is considered by some to be his masterpiece. 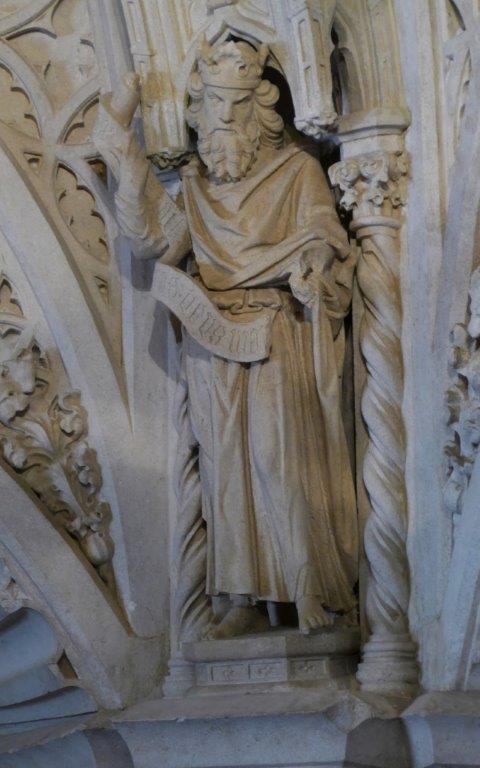 Carved stonework in a corner of the baptistery.

Because the interior of the Cathedral was undergoing extensive renovations when I visited no photographs of the interior accompany this article. 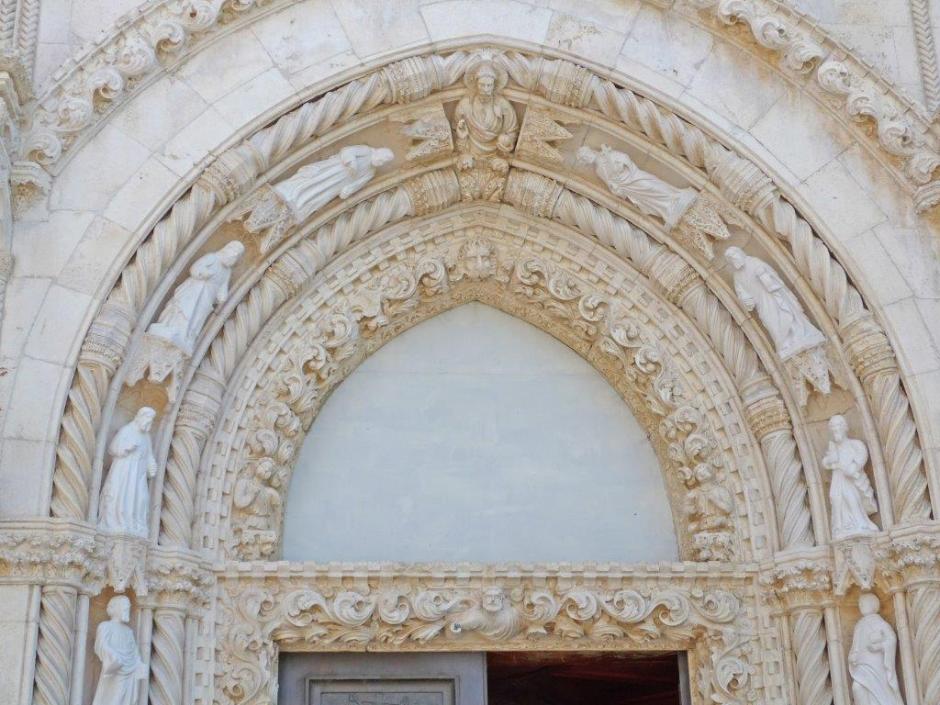 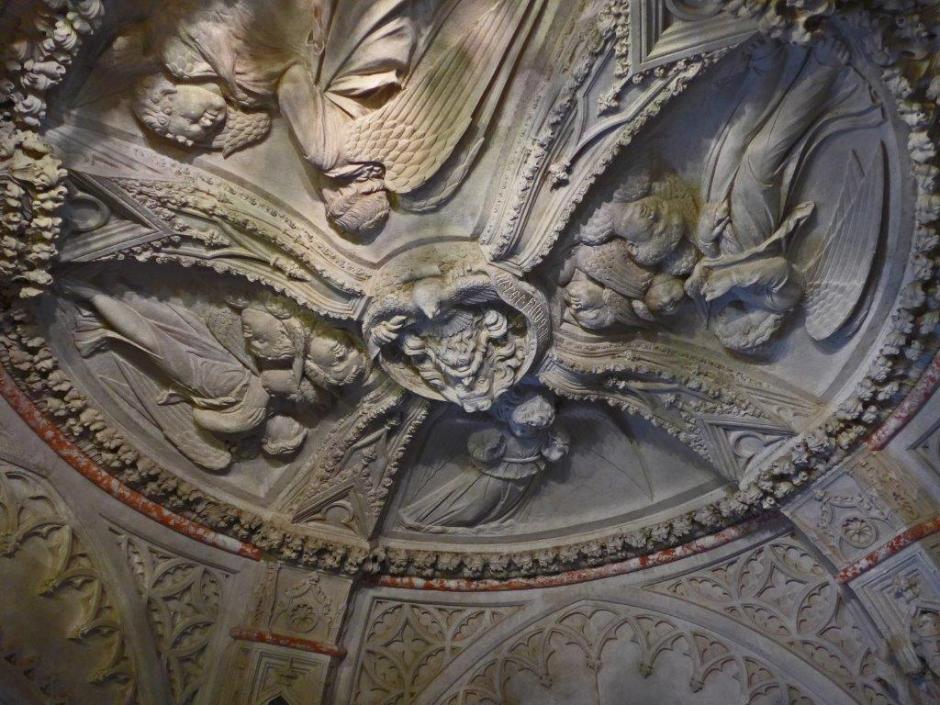 Part of the ceiling in the baptistery.