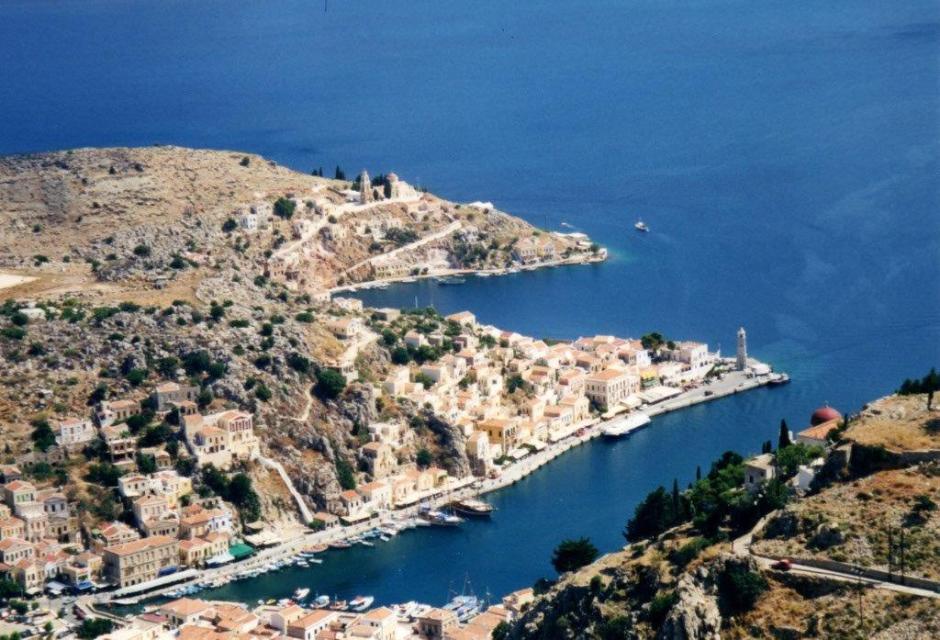 Panoramic view of Symi Harbour. Clock tower on the point. Church of Moni Agiou Giorgio on headland beyond.

The delightful Greek Island of Symi, part of the Dodecanese island chain, once was richer and more populous than Rhodes.  With the collapse of the natural sponge trade and the decline in boat-building its population fell from 22,500 at the end of the nineteenth Century to the present 2,500.  Its fortunes are now improving with the growth of tourism – mainly daytrippers from Rhodes but also tourists who stay for several days.  From Easter to early November the number of people on the island increases to as much as 6,000.  Half of the current population is engaged in commerce and tourism – hotels, restaurants and transport.

The island is 67 square kilometres in area and at the nearest point is 5 miles from the Turkish coastline.  It is mostly covered by rocks.  Its coastline alternates between isolated coves, and rocky cliffs and beaches.

Symi was part of the Roman Empire, followed by the Byzantine Empire, until conquered by the Knights of St. John in 1373. In 1522 it became part of the Ottoman Empire but was allowed to retain many of its privileges.  During the 20th Century it changed hands several times – occupied by Italy in 1923 and Nazi Germany in October 1943.  The surrender of German forces in the region to the British at the end of World War II took place on Symi. The British remained in occupation for three years before the island rejoined Greece in 1948.

The main town of the island Symi (also called Symi) is on the northeast coast with a picturesque harbour.  The lower town around the harbour is referred to as Yialous (Gialous) and the upper town is called Horio (Chorio) or Ano Symi.

Symi devotees recognise it as an authentic Dodecanese gem and are particularly drawn by its neoclassical houses stacked around the steep-sided bay, all now subject to a Greek preservation order.

A road from the waterfront to above the houses of the upper town provides spectacular views over the harbour and the lower town. It then provides access to the south to Pedi Beach and its pleasant boutique hotel on the beachfront.

Turning in another direction the road passes through a cypress forest on the way to Panormitis Bay the site of the island’s monastery of St Michael of Panormitis, a place of pilgrimage for people from all over the world. 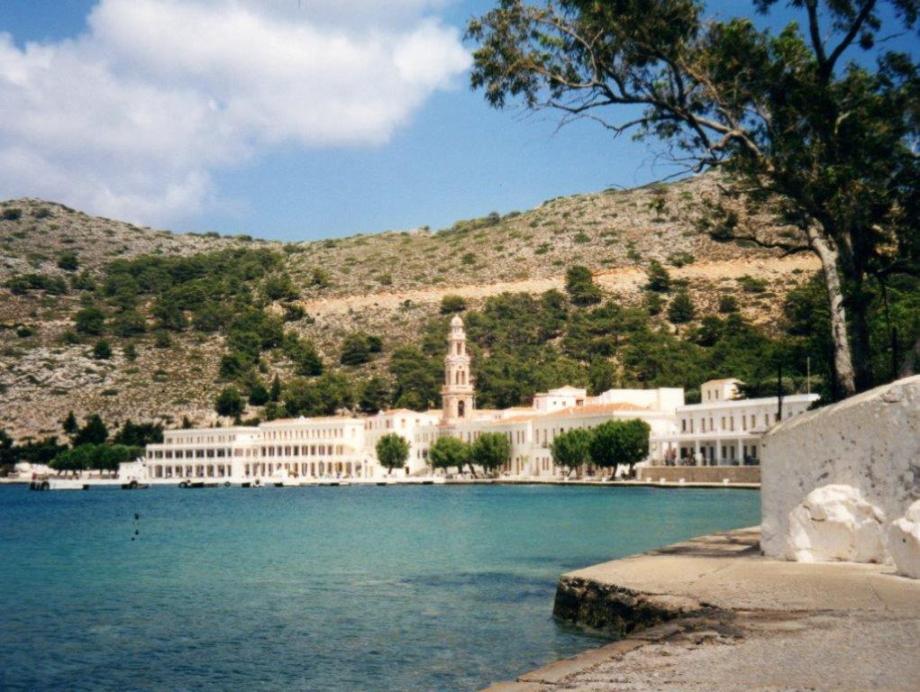 The monastery is a large 18th Century Venetian styled building.  Its baroque bell tower is said to be the highest in the world.  The façade is white and stretches along the waterfront on either side of the gateway.

The church which houses the icon of Archangel Michael Panormitis is inside the monastery grounds.  Archangel Panormitis is the island’s patron saint and also regarded as the guardian of sailors in the entire Dodecanese area.  The date of construction of the church is unknown but some suggest it was built in 450 CE over the site of an ancient temple dedicated to the pagan god Apollo.

Although Symi is seen by some as a “backwater” it is, without doubt, worth a visit particularly if in Rhodes – it is only a day-trip away.

Photographs by George Repin in 2001 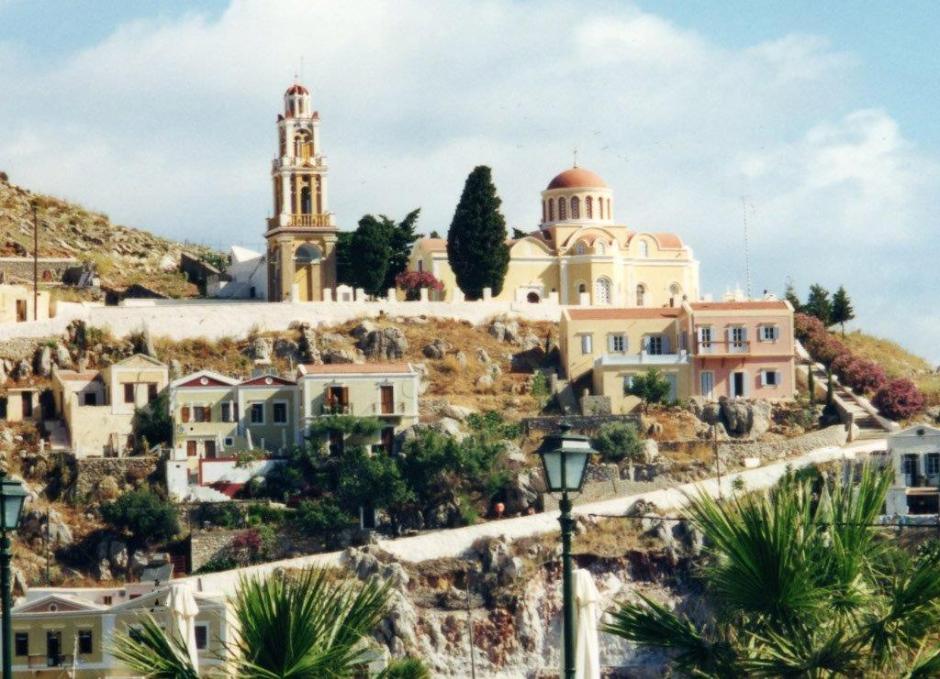 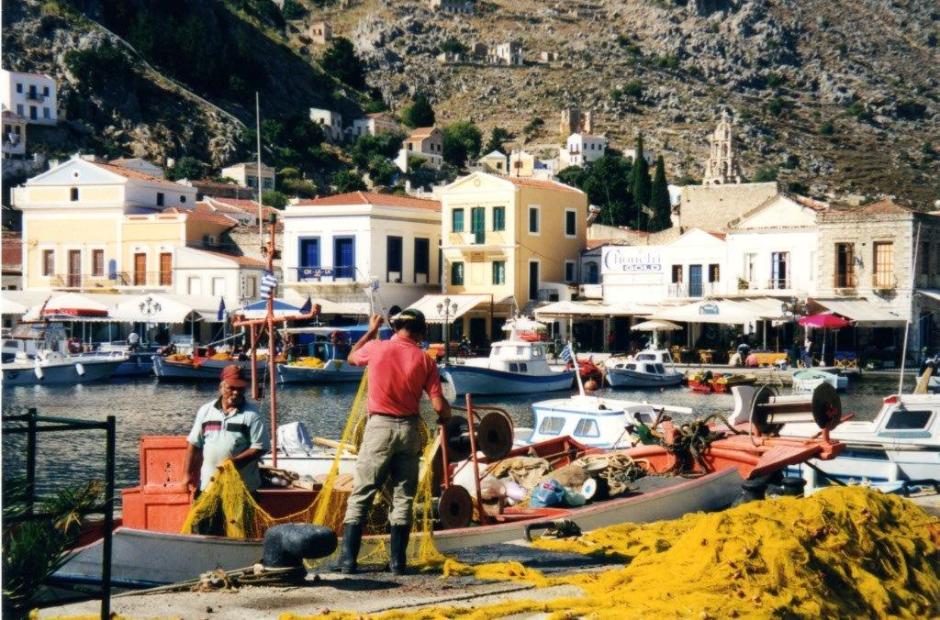 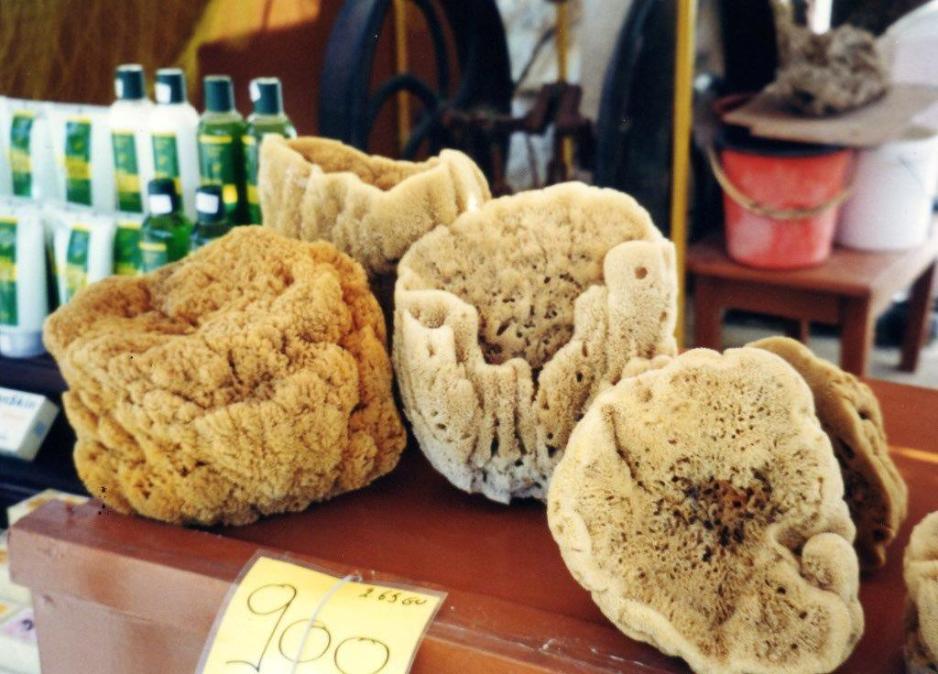 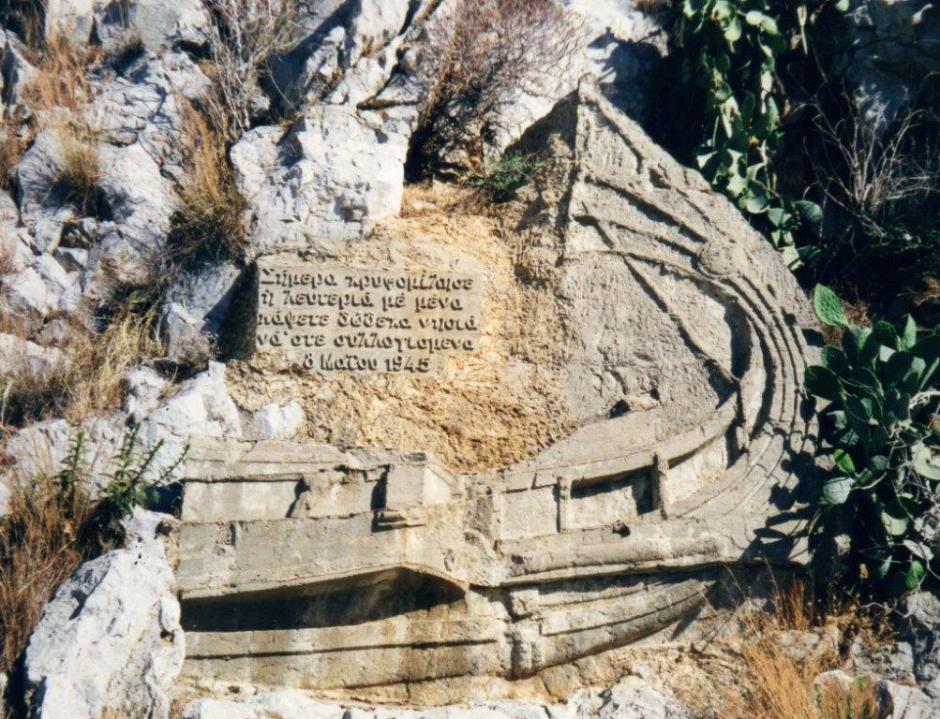 Monument marking the Nazi surrender of Dodecanese to the British on 8 May, 1945.

The Nineteen Thirties  Remembering Rowe Street  The Sydney Push  Saturday Night at the Movies  Shooting Through Like A Bondi Tram  A Stop On The Road To Canberra  City Department Stores - Gone and Mostly Forgotten  An Australian Icon - thanks to Billy Hughes  Crossing The Pacific in the 1930s  Hill End  The Paragon at Katoomba  Seafood In Sydney  How Far From Sydney?  Cockatoo Island Over The Years  The Seagull at the Melbourne Festival in 1991  Busby's Bore  The Trocadero In Sydney  Cahill's restaurants  Medical Pioneers in Australian Wine Making  Pedal Power and the Royal Flying Doctor Service  Pambula and the Charles Darwin Connection  Gloucester and the Barrington Tops  A Millenium Apart  Have You Stopped to Look?  Gulgong  Il Porcellino Olympia  Durham Hall  Sargent's Tea Rooms Pie Shops and Street Photographers The Ballet Russes and Their Friends in Australia  Hotels at Bondi  Alma Ata Conference - 1978 Keukenhof - 1954 The Lands Department Building and Yellowblock Sandstone  The Goroka Show - 1958  A Gem On The Quay  Staffa  The Matson Line and Keepsake Menus Kokeshi Dolls  The Coal Mine At Balmain  The Hyde Park Barracks  The Changing Faces Of Sydney From Pounds and Pence to Dollars and Cents Nell Tritton and Alexander Kerensky  Making A Difference In Ethiopia William Balmain  J C Bendrodt and Princes Restaurant Azzalin Orlando Romano and Romano's Restaurant Waldheim  Alcohol in Restaurants Before 1955  King Island Kelp  The Mercury Theatre  Around Angkor - 1963  Angkor Wat 1963  Costumes From the Ballets Russe Clifton at Kirribilli  Chairman Mao's Personal Physician  The Toby Tavern The MoKa at Kings Cross The Oceaographic  Museum in Monaco  The Island of Elba Russian Fairy Tale Plates Meteora Souda Bay War Cemetery Barrow, Alaska Cloisonné Tripitaka Koreana Minshuku The Third Man Photographs and Memories Not A Chagall! Did You Listen? Did You Ask?Napier (Ahuriri, Maori) New Zealand Borobudur  Ggantija Temples Plumes and Pearlshells Murano  University of Padua Ancient Puebloe Peoples - The Anasazi  Pula  The Gondolas of Venice Cinque Terre  Visiting the Iban David The Living Desert Bryce Canyon National Park  Aphrodisias  The Divine Comedy Caodaism  Sapa and local Hill People  A Few Children Cappadocia