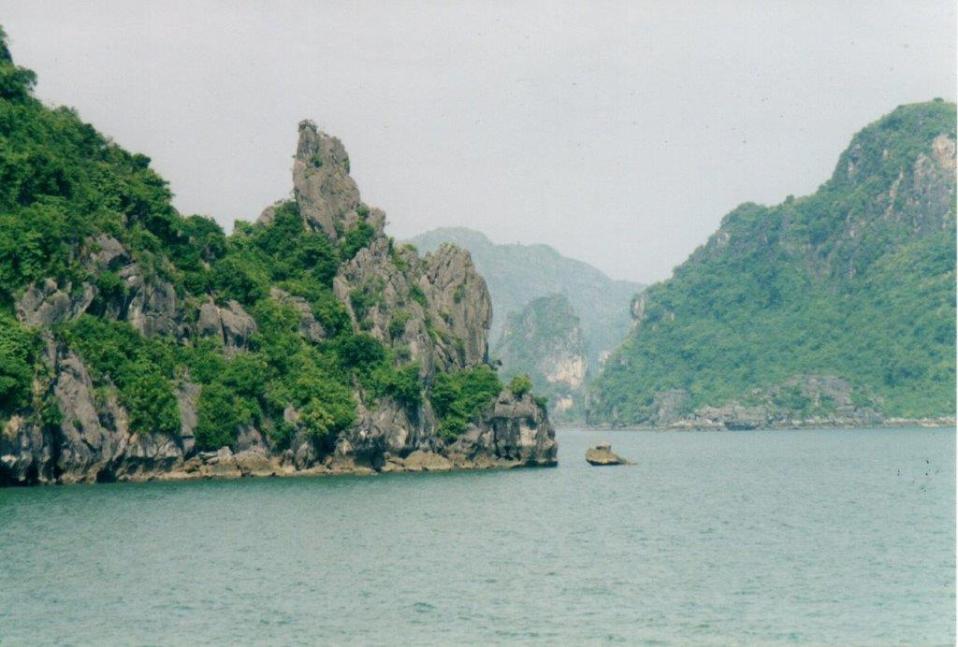 Typical cliffs - a feature of the islands in Ha Long Bay.

As the most popular tourist attraction in the north-east of Vietnam Ha Long Bay draws a steady stream of visitors the year round.  During February to April the weather is often cold and drizzly, and fog may reduce visibility, but still they come, attracted by the breathtaking views. Over 3000 islands rise from the emerald waters of the Gulf of Tonkin spread over 1500 sq kms.  In 1994 Ha Long Bay was designated by UNESCO as a World Heritage Site.
Tour boats are plentiful to carry visitors between and around the islands with the views constantly changing.  Tourists relax on the deck enjoying drinks or tasty Vietnamese food. . In addition to day trips visitors can stay on board overnight or longer. 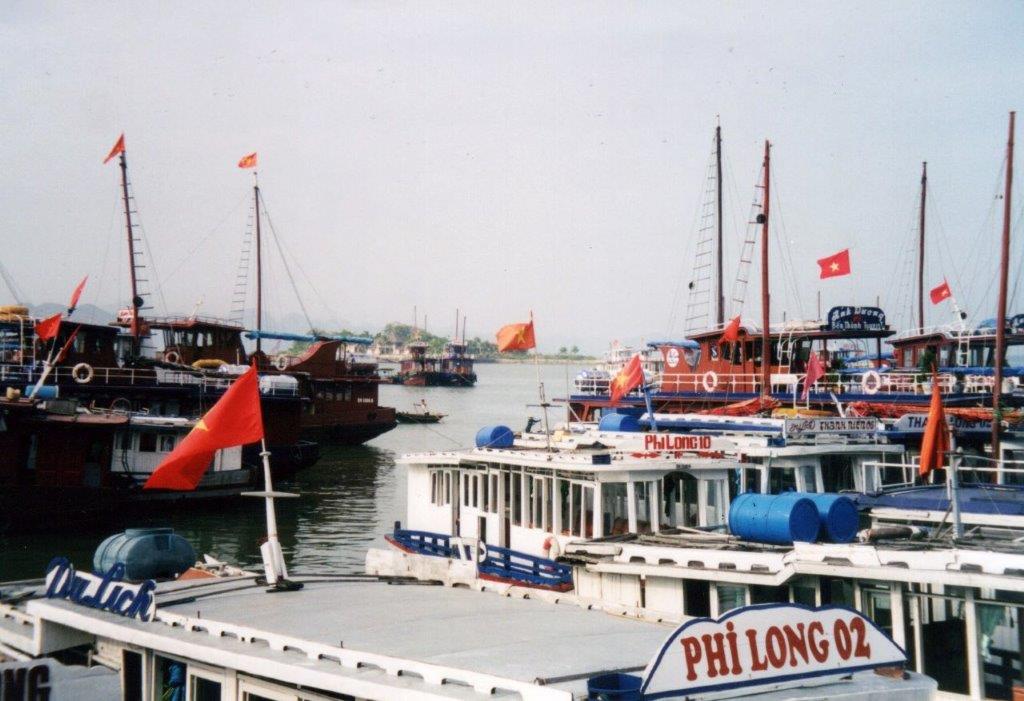 Tour boats docked during the "off" season - waiting for tourists. 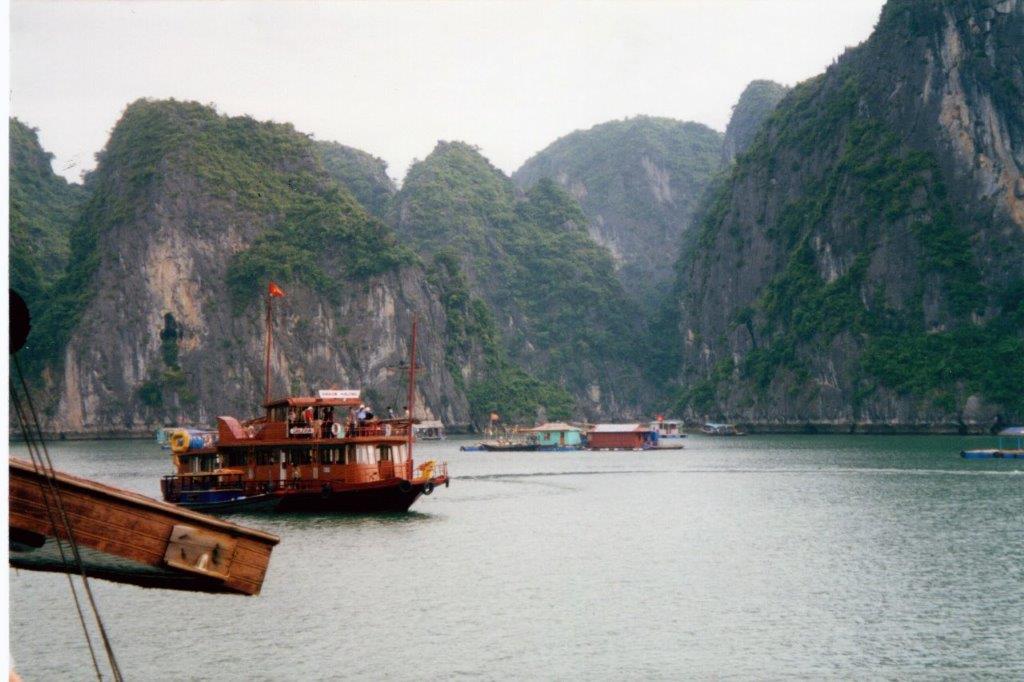 A tour boat in the Bay with fish farms in the distance. 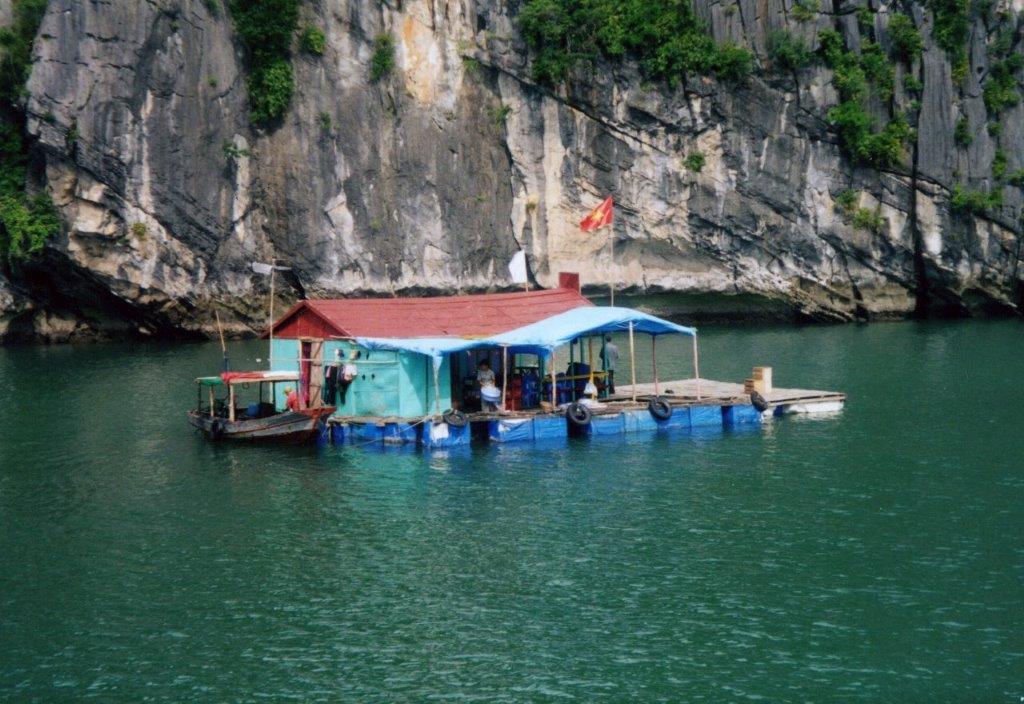 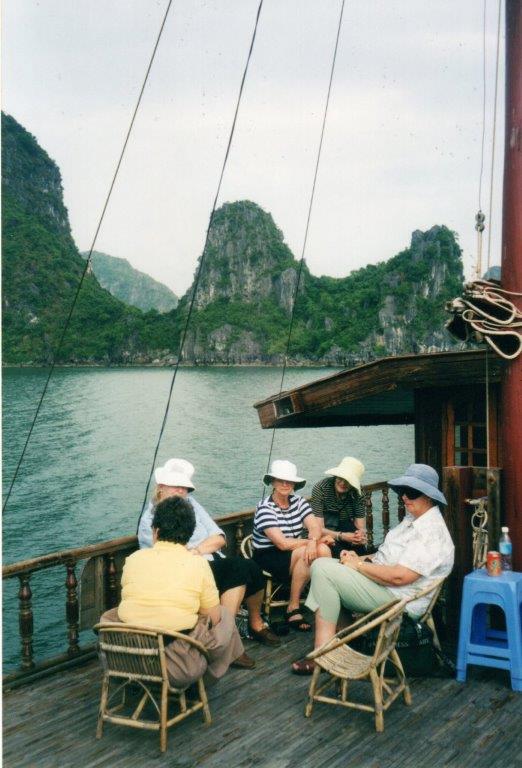 Relaxing on the deck enjoying the passing scenery.
Because of the nature of the rocks making up the islands there are thousands of caves of all sizes and shapes, many of which are accessible to visitors and some of which are illuminated.
Hand Dau Go (Grotto of Wooden Stakes) is a large cave made up of three chambers.  It is reached from a landing stage by 90 steps. Among the stalagmites of the lower (first) chamber there is what looks like an amusing group of gnomes appearing to hold a meeting. The walls of the second chamber sparkle when bright light is shone on them.  The name of the grotto is derived from the third chamber which, in the 13th Century CE was a store for sharp bamboo stakes used against Kubla Khan’s invasion fleet. 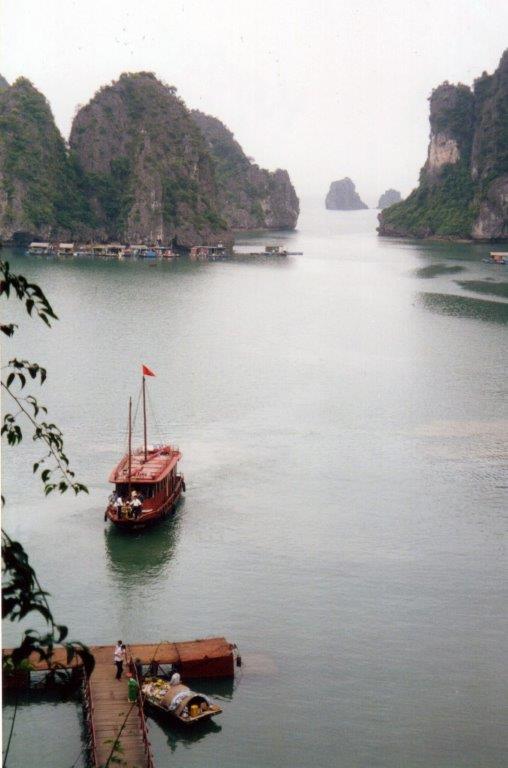 Landing stage at the foot of the steps up to the Grotto of the Wooden Stakes. 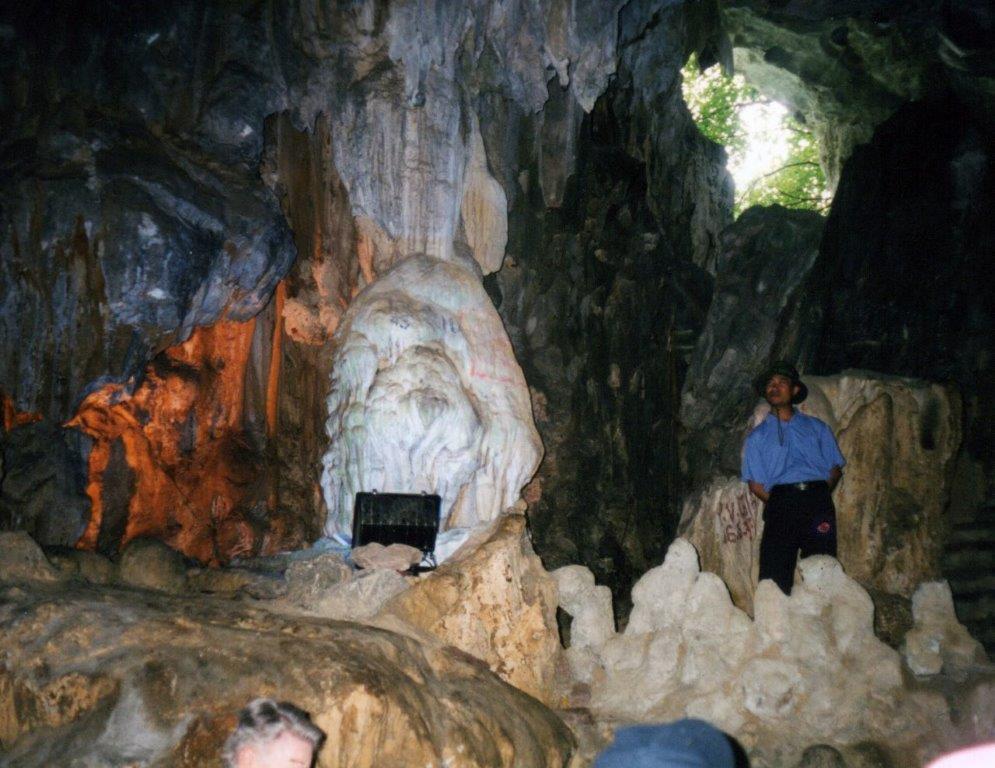 The first (lower) chamber of the Grotto.  The "meeting of the gnomes" in the right bottom corner. 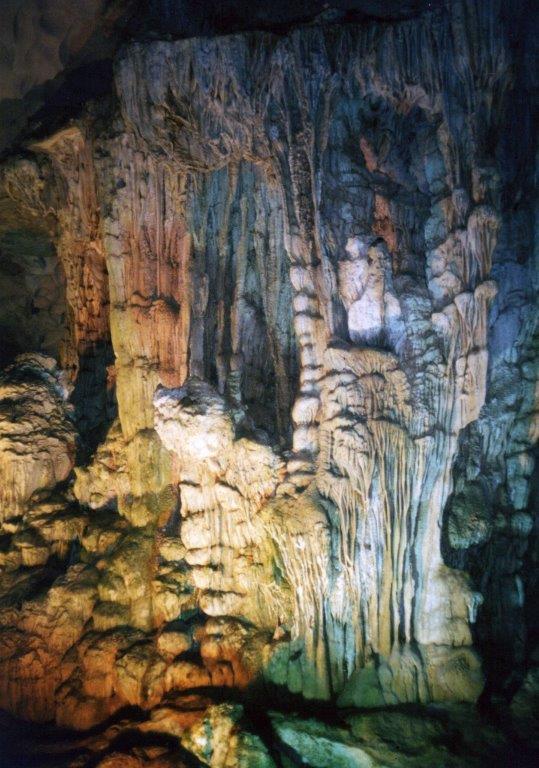 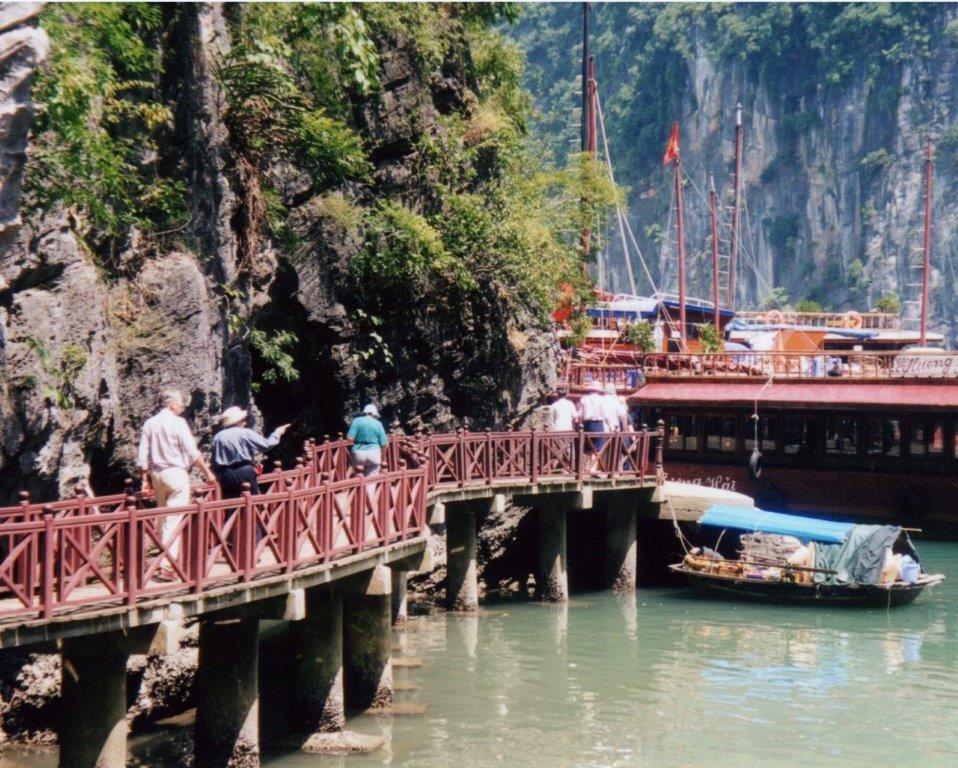 Tourists who have descended from  the Grotto moving to reboard their cruise boat.
Ha Long translates literally as “where the dragon descends into the sea”.  Legend has it that the islands were created by a giant dragon who lived in the mountains. As it ran towards the coast, its flailing tail gouged out  valleys and crevasses; as it plunged into the sea the areas dug up by the tail filled with water leaving only the high land visible.
An old hotel in the area – the Ha Long Hotel – apparently was used as a retreat by Ho Chi Minh in his lifetime.  When the actress Catherine Deneuve was in Vietnam making the movie Indochine she was accommodated in Suite 208 of the hotel – the suite which previously had been used by the President. 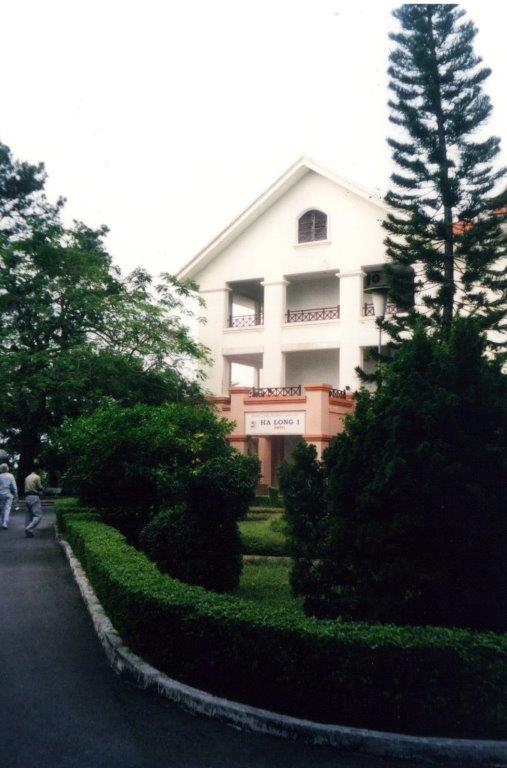 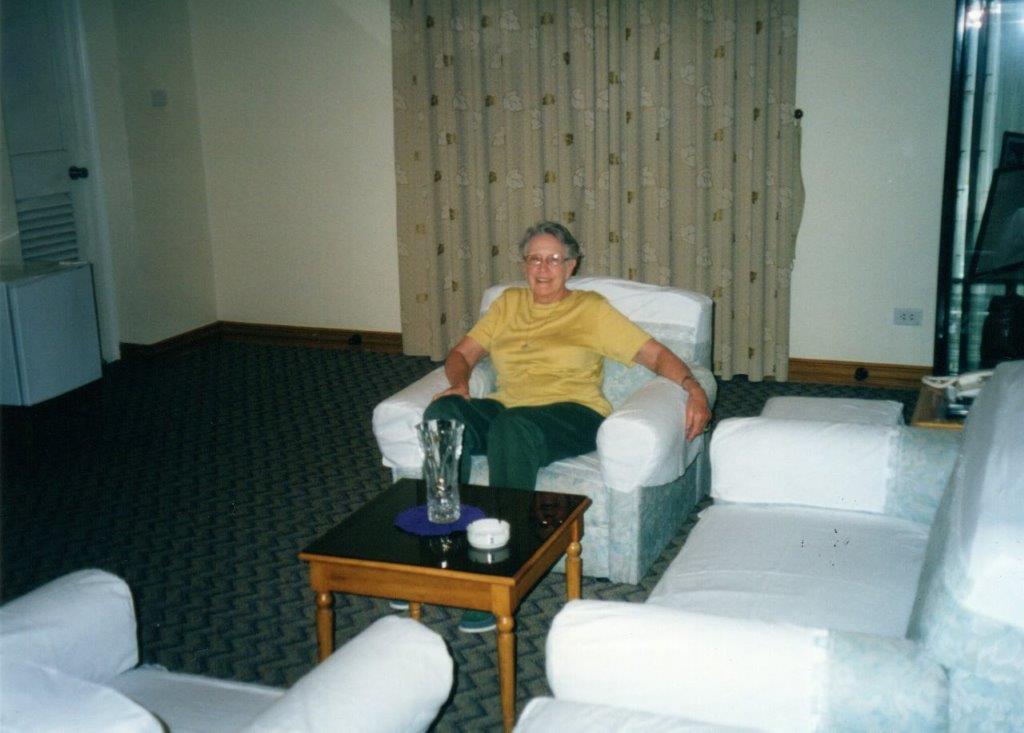 In the suite (208) which had been occupied by the actress Catherine Deneuve during the making of the film "Indochine".
(Photographs by George Repin in 2002)