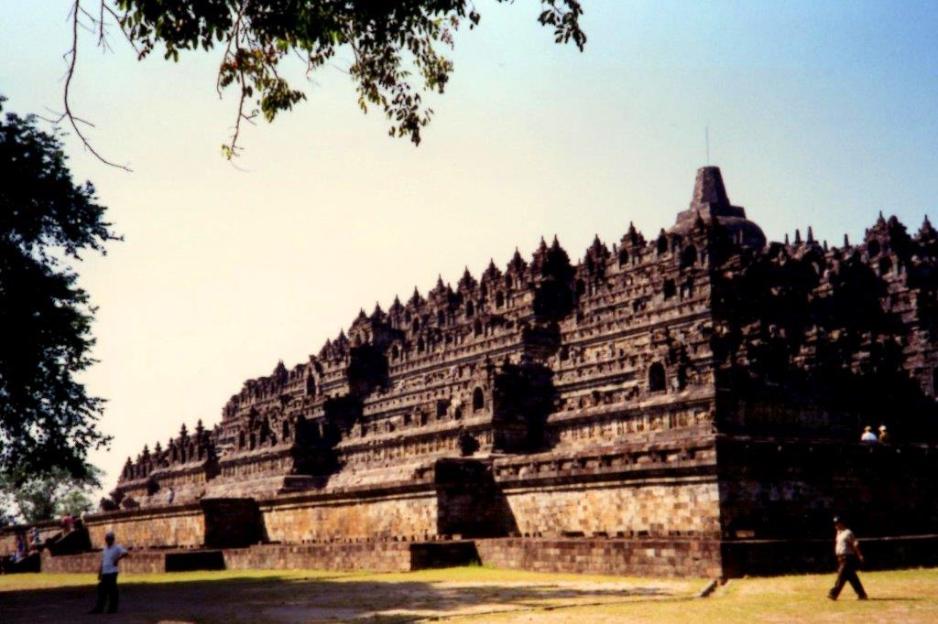 Borobudur, one of the greatest Buddhist structures in the world, is located about 40 Kms. North-west of Yogyakarta on the island of Java in Indonesia. It is an architectural and sculptural masterpiece.

It was built in the 9th Century around a bedrock hill in an elevated area between two rivers – the Progo and the Elo –and looks across the Kedu plateau to hazy hills in the distance. 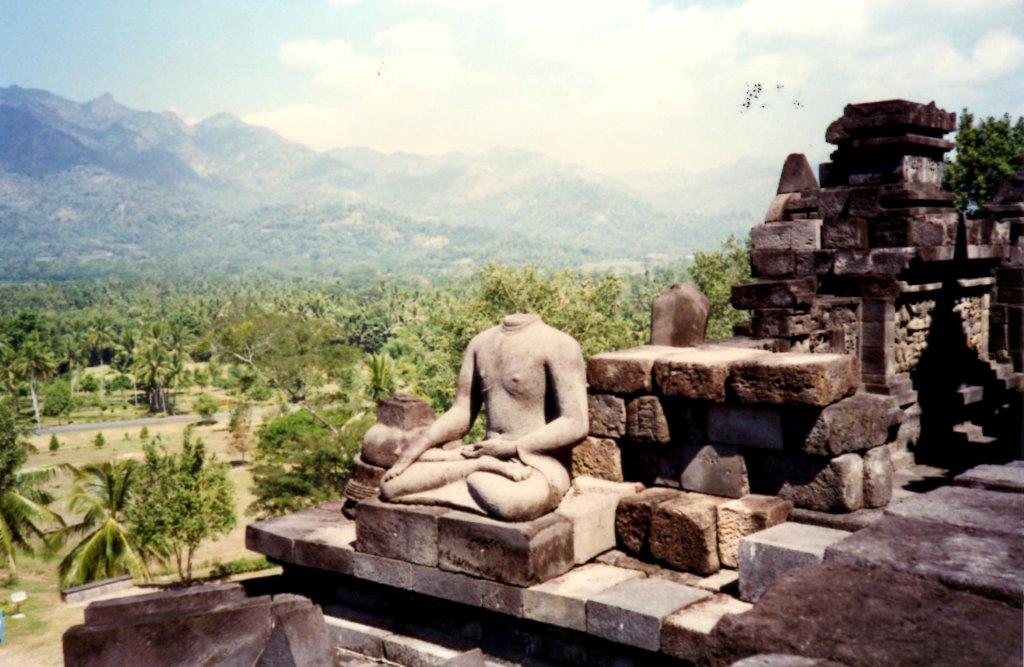 View from the top across the Kedu plateau.

It is made up of six square platforms, topped by three circular platforms, with stupas at various levels and with a main dome or stupa on the top platform.

More than three miles of bas reliefs are carved into the stone of the temple’s galleries illustrating Buddhist texts and the life of the Buddha and, incidentally, showing scenes of ancient Javanese daily life in the 8th  Century. In all there are 2,670 individual bas reliefs (1,460 narrative and 1,212 decorative panels).

Many images of the Buddha adorn the monument. The cross-legged statues are seated in the Lotus position in niches on the outer sides of balustrades and inside stupas. While at first they appear similar to each other, on close examination it is apparent that they vary in theirmudrus, or hand gestures, indicating their different moods.

Statues decrease in number as the platforms get smaller at the higher levels. Of the original 504 statues over 300 are damaged (mostly headless) and 43 are missing. Regrettably heads have been stolen as collectors’ items and even by Western museums. Artefacts removed in 1896 including lions, dvarapala, kala, makara and great water spouts were put on display in the Java Art room in the National Museum of Bangkok. 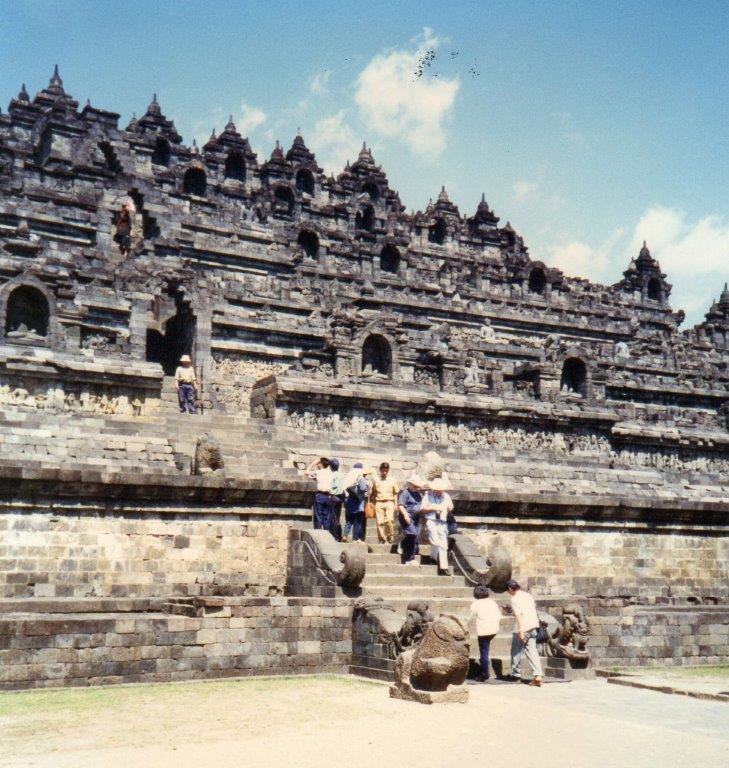 Steps up on to the structure.

The structure was hidden under layers of volcanic ash and jungle growth for centuries until Java came under British administration from 1811 to 1816. The Governor, later to become known as Sir Stamford Raffles, when on an inspection tour to Semarang in 1814 was told of a big monument deep in the jungle. H. C. Cornelius, a Dutch engineer, whom he sent to investigate, burnt down trees and dug earth away to reveal the monument.

Preserving Borobudur since its discovery in 1814 has been a major undertaking. Some restoration work was done by the Dutch East Indies Government between 1907 and 1911, while small restoration projects were subsequently put in place.

UNESCO listed Borobudur as a World Heritage site in 1991.

As a Buddhist structure in a Muslim country Borobudur has been damaged on a number of occasions by Muslim extremist groups. On 21 January, 1985 nine stupas were badly damaged by nine bombs.

UNESCO has identified three specific areas of concern in relation to conservation – vandalism by tourists, soil erosion in the south-eastern part of the site, and analysis and restoration of missing elements.

The monument is the single most visited tourist attraction in Indonesia. Unfortunately, vandalism of reliefs and statues is a common occurrence and an increasing problem. 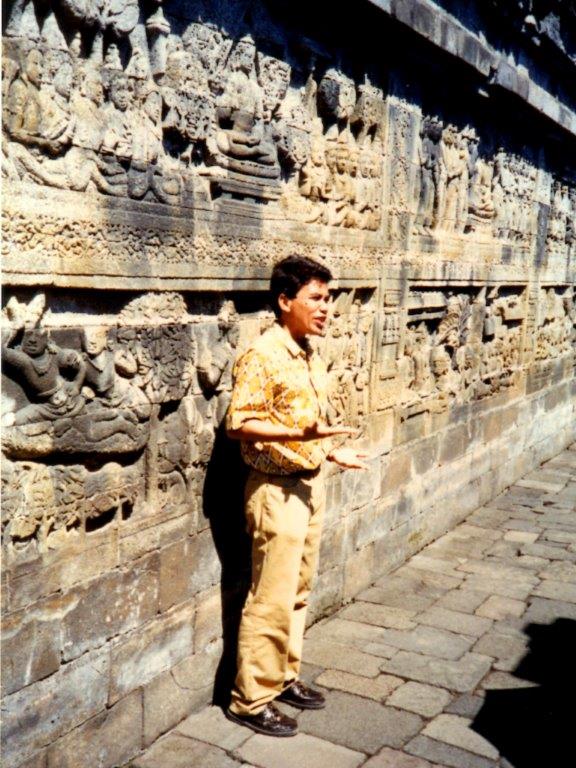 Photographs by George Repin in 1996 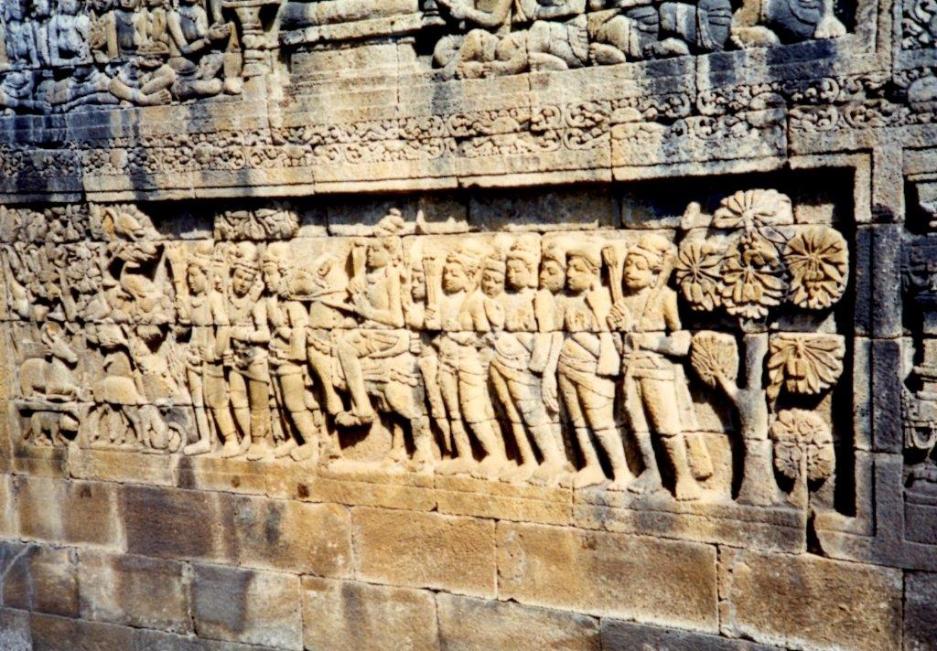 Bas relief of Javanese life in the 9th Century. 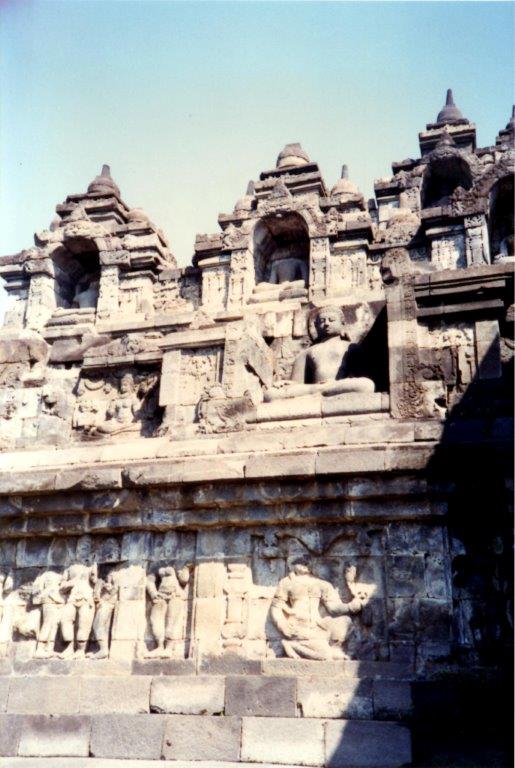 Niches with statues of the Buddha. 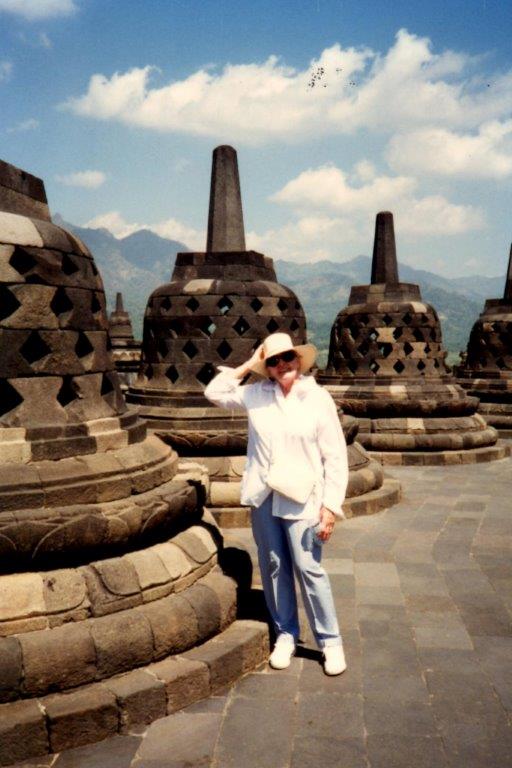 Stupas on top of the structure with a figure to indicate the scale. 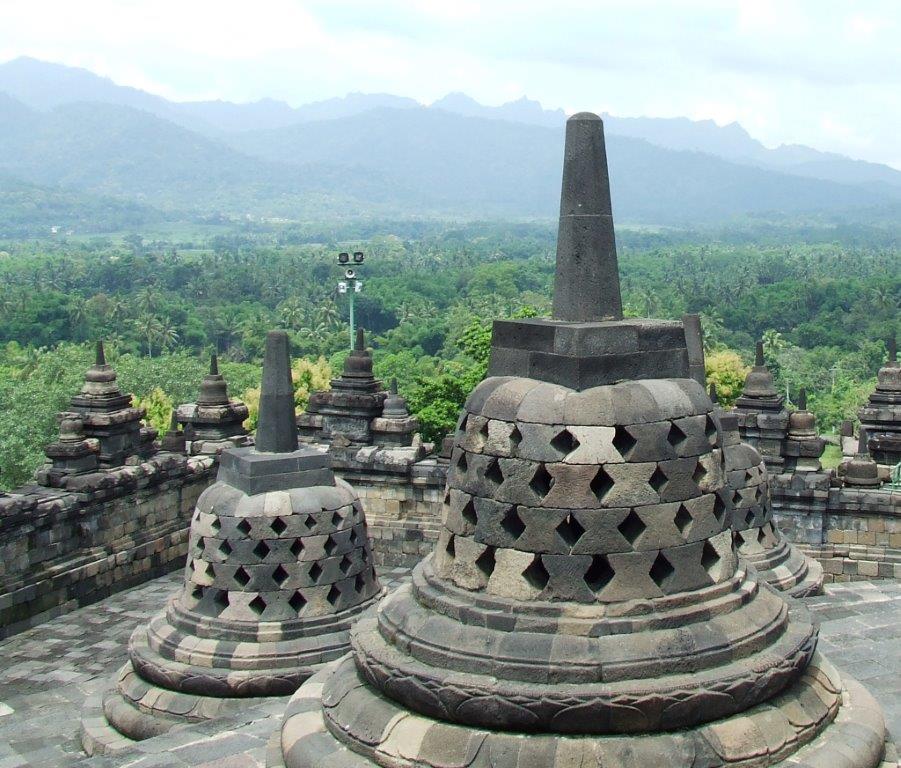 Stupas on the top with view across the Kedu plateau to the hazy hills.