Climbing up the steep, narrow wooden stairs from King Street, just down from Castlereagh  Street, and entering the Toby Tavern on the first floor was like stepping into the dining room of an old inn in England.   Polished brass dishes and framed slightly discoloured scenes of the English countryside, some quickly recognisable by the red jackets on the horsemen as pictures of “the hunt”, set off the dark oak paneling of the walls. The floor was dark oiled timber.  Brass ornaments, “Toby” jugs and a large clock brightened the mantelpiece over a large fireplace but the overall impression was subdued, if not gloomy.  Some relief was provided by the “Toby” jugs on shelves above the wall paneling and by the lace table clothes which completely covered each of the timber tables.

The Toby Tavern was open for lunch and dinner, serving traditional English fare with excellent roasts.  The owner and chef was Gerry Kearney.  He was short, very rotund, slightly florid faced, thick necked and always jovial.

Once each month, however, the atmosphere changed when the Beefsteak Club met and the restaurant was closed to the public for dinner.  A group of businessmen made up the club and met monthly to enjoy national and international dishes.  They made the Toby Tavern their headquarters and Gerry Kearney the club’s Honorary Chef.  For meetings of the club he was adventurous both in his choice of themes and the dishes presented.

At the meeting in February, 1955, to provide the atmosphere for a sumptuous seafood meal, the room was decorated with trawler nets, big game rods and equipment used by members of the Underwater Explorers’ Club who contributed 300lbs of fish for the table.  The Explorers had put a great deal of effort into providing a great variety of fish to please every palate.  The centrepiece was a Wobbegong shark speared on the previous Saturday, surrounded by Blue and Brown Groper, Sergeant Baker, Tasmanian Trumpeter, Morwong, Kingfish, Parrot Fish, Schnapper, Squire, Bream, Barramundi, Murray Cod, Murray Perch and shark.  Mud crabs (from Queensland), prawns, lobsters, yabbies, pippies, abalone, octopus, eel and squid also were on the menu.

Right: Seafood provided by the Underwater Explorers' Club. Picture from March 1955 issue of the Australasian Confectioner and Milk Bar Journal

Mr T C Roughley, who had been Superintendent of NSW Fisheries, the Guest of Honour for the evening was introduced by the President of the Club using a fish head as a gavel.  He gave an informative, amusing talk on the denizens of the deep – and the shallows – and said that the table carried the finest display of representative fish he had ever seen.  The leader of the Underwater Explorers’ Club, Mr Don Linklater, compered a demonstration by the Club’s members of the equipment they used in their sport, emphasising that their interest was to enjoy the beauties under the water and not the indiscriminate spearing of fish.

For those interested in the signs of the Zodiac it was a happy coincidence that February is the month of both Aquarius (the water bearer) and of Pisces (fishes).

In September 1957 Gerry Kearney cooked for the Beefsteak Club’s dinner in honour of Jack Witter and Douglas Stewart winners of the Round Australia Car Trial.  The menu was based on delicacies from all over the country and included witchetty grubs.

The Toby Tavern, was in the building over the King Street exit of the old Theatre Royal in Castlereagh Street and, accordingly, was lost to Sydney when the theatre was demolished and replaced by the MLC Centre.

Gerry Kearney went on to establish a mobile barbecue business servicing picnics, private parties and clubs – and continued to cook. The Beefsteak Club moved on. 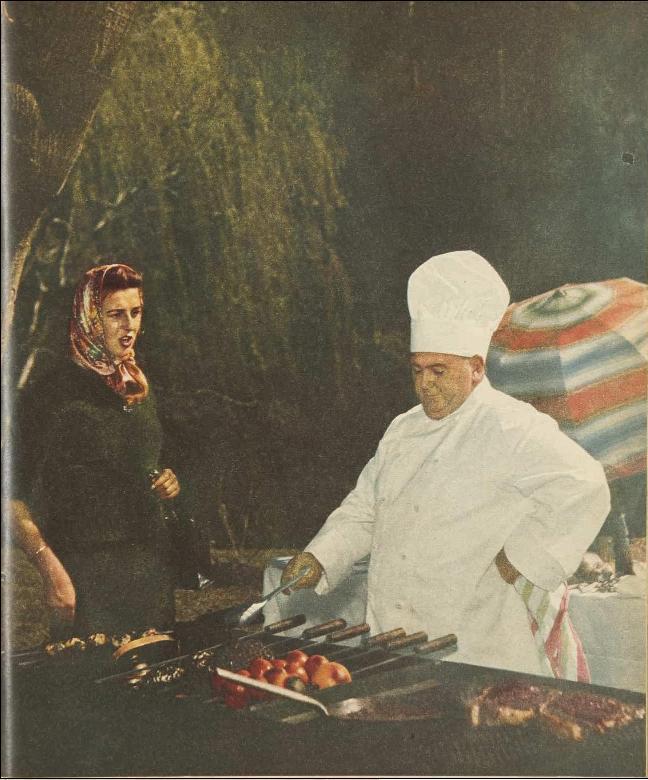 At Audley, near Sydney, Princess Alexandra had lunch on the river bank after visiting the Junior Red Cross Home at Cronulla. She wore a green wool jumper-suit, and before the picnic exchanged her flowered hat for a silk scarf and her high heels for suede brogues. Here, beside the trees and racing river, she is at the barbecue with Gerry Kearney, honorary chef of the Beefsteak Club of N.S.W. Picture is by staff photographer Keith Barlow.  PRINCESS AT PICNIC. (1959, September 30). The Australian Women's Weekly (1933 - 1982), p. 3. Retrieved from http://nla.gov.au/nla.news-article43737323