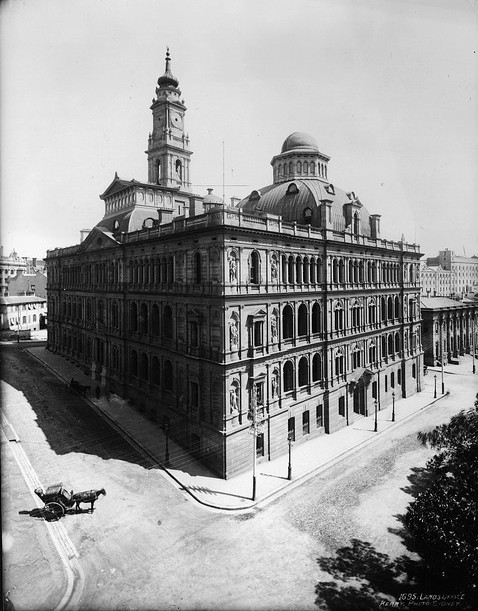 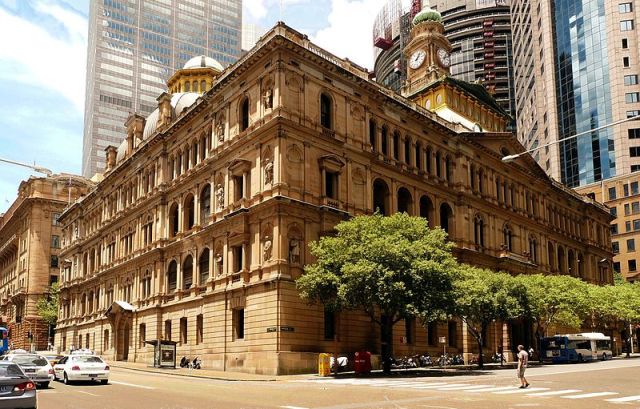 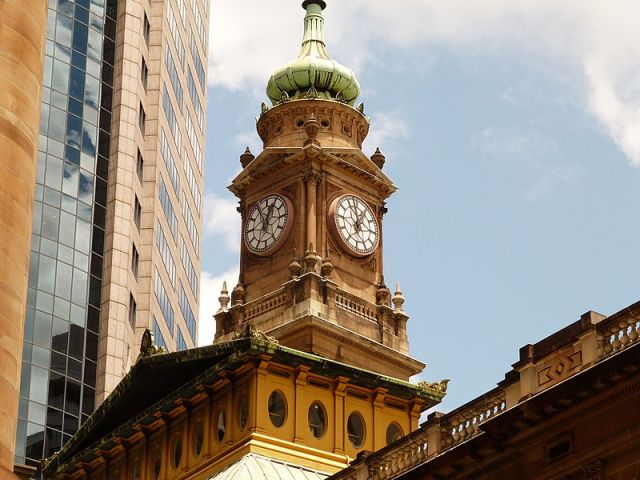 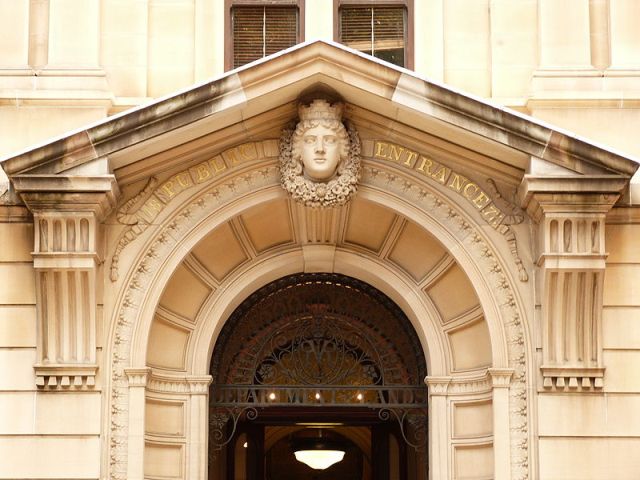 THE LANDS DEPARTMENT BUILDING AND YELLOWBLOCK SANDSTONE
By George Repin

When the Lands Department Building was completed in 1891 the present day tall buildings which now dominate Bridge Street and surrounding areas were not there so that  it was highly visible and impressive when viewed from the harbour. At the time it was described by the Illustrated Sydney News as Sydney’s largest building.  Built in two stages (1876-1881 and 1888-1891) it replaced buildings occupied by the Surveyor-General since 1804. The site had been used for Government offices from 1789 – virtually from the start of the colony.

Designed by James Barnet, the Colonial Architect, designer of the nearby Customs House, General Post Office and the Old Medical School at the University of Sydney, it  is well-proportioned, relates well in scale to nearby Government buildings and is an outstanding example of the use of Pyrmont yellowblock sandstone.  The “honey” colour of the sandstone contributes to the beauty of buildings. While easy to work the stone is not durable and tends to flake away or “scale” when exposed to the elements.

Maintenance of the exterior of the building is near continuous and expensive.  The shortage of yellowblock sandstone has compounded the problem of maintenance, not only of the Lands Department Building, but also of other buildings such as the Sydney Town Hall.  It appears that developers in Pyrmont, with a few exceptions, have had little incentive to save it when carrying out excavations.  According to a Sydney Morning Herald editorial yellowblock at development sites was usually being just broken up and dumped as landfill and the State Government’s stocks of yellowblock were fast being depleted.

The building houses a number of State Government Departments.

It occupies the entire block bounded by Bridge, Gresham, Bent and Loftus Streets.

Twelve niches on each of the four sides were intended for statues of men who distinguished themselves in the exploration of the colony and parliamentarians responsible for promoting settlement.  Fewer than half have been filled. On the Bridge Street façade can be seen Bass, Oxley, Sir Thomas Mitchell, Wills, Sir Joseph Banks, Bourke, Leichhardt, Arthur Phillip, Flinders and Sturt.

The building is the site of two important datum points.  One is a bench mark on the Bridge Street wall from which height levels in New South Wales are measured and the other is the  State’s baseline standard - the responsibility of the Surveyor-General - which is the standard for all surveyors.  The standard consists of stainless steel rods set in bedrock and visible in the marble flooring on the ground floor.

Across the road, in Macquarie Place, is the obelisk from which road distances from Sydney are measured - so the three reference points are near each other.

The history, location, lofty ceilings and detailed internal finishes of the building from time to time have generated proposals to convert it into a hotel of international standard, a casino or luxury apartments. In 1996 the State Cabinet rejected a proposal for a hotel and decided that it should continue as the head office of the Department of Land and Water Conservation.

However, as recently as 18th March, 2012 The Sunday Telegraph reported that Andrew Stoner, Minister for Trade and Investment, in an interview had said that many international investors had expressed interest in leasing and refurbishing historic Sydney 19th Century buildings as hotels.  He said this could meet the city’s shortage of hotel accommodation, provide millions in revenue to the Government  and cut the cost of maintaining the buildings. He said a Taskforce had been established to assess the State’s property assets generally. Modelling suggests that Sydney will need another 9000 hotel beds by the year 2020 and, according to the Australian Bureau of Statistics Sydney hotel occupancy rates are now 85.6%.

A precedent for government buildings to be incorporated in or converted to luxury hotels is provided by the successful blending of the former Treasury Building into the Intercontinental Hotel in the 1980’s. 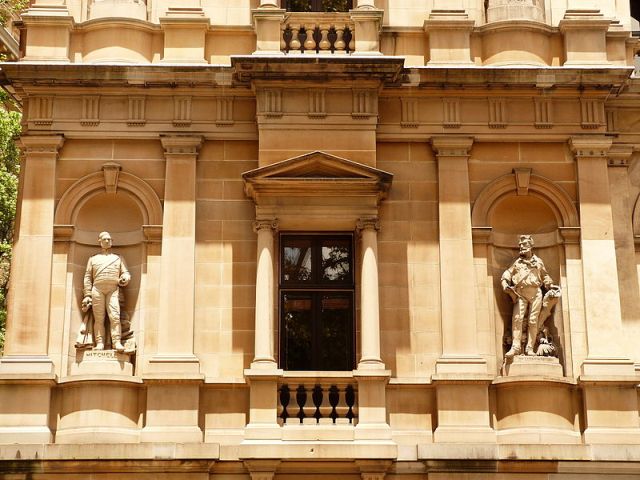 Two of the statues on the façade. Picture courtesy Sardaka.