The epic poem, The Divine Comedy (Divina Commedia) written by Dante Alighieri, originally was titled just Commedia. Giovanni Boccaccio added Divina to the title. It is regarded the pre-eminent work of Italian literature and considered one of the greatest works of world literature.

Written between 1308 and Dante’s death in 1321 it is composed of 14,233 lines divided into three canticas – Inferno (Hell), Purgatorio (Purgatory) and Paradiso (Paradise) – each consisting of 33 cantos (with an introductory canto to Inferno). Written in the first person it begins on the night before Good Friday in the year 1300 when Dante was 35 years of age – “halfway along life’s path” - that is to say, half of the biblical life expectancy of “three score years and ten”.

In the poem Dante is joined by the Roman poet Virgil and together they venture into the underworld of Inferno and Purgatorio. However, it is Dante’s “ideal woman” Beatrice who guides him through Paradiso.

Dante was born in Florence but the exact date of his birth is not known.

Based on autobiographic allusions in the poem it has been concluded that he probably was born in 1265.

Dante was politically active and became embroiled in the Guelph-Ghibelline conflict and in the schism between the White and Black Guelphs.

In March 1302 he was in Rome when he was condemned to two years exile and ordered to pay a fine. He did not pay the fine, in part because he did not believe that he was guilty and in part because all of his assets in Florence had been seized by the Black Guelphs. Consequently he was condemned to perpetual exile and, if he returned to Florence without paying the fine, he could be burned at the stake. He never returned to Florence.

Although in 1313 an amnesty was granted to those in exile, including Dante, he was not prepared to do the required public penance and pay a heavy fine, preferring to remain in exile.

In 1318 he accepted an invitation to Ravenna where he finished writing Paradiso. He died in 1321, aged 56, and was buried in Ravenna.

Over time Florence made repeated requests for the return of his remains, which Ravenna refused. The custodians of his body were so concerned that the Florentines might attempt to seize his remains that, at one point, his bones were concealed in the wall of the monastery.

In 1829 a tomb for Dante was built in the Basilica of Santa Croce in Florence, near the tombs of such famous figures as Galileo, Machiavelli and Michelangelo. A quote from the fourth canto of Inferno – onorate l’altissimo poeta (Honor the most exalted poet) – is inscribed on the front of the tomb. The tomb remains empty to this day.

Apparently to demonstrate his association with Florence, the city where he was born, a full length statue of Dante was erected, and stands today, in front of the façade of Santa Croce.

However, it was not until June 2008 that the City Council of Florence passed a motion rescinding Dante’s sentence.

The Italian sculptor, painter and engraver, Benedetto Robazza (b.1934), after living and working for many years in the USA, where he opened Benedetto’s Gallery in New York, devoted several years of his life, on his return to Italy, to creating his masterpiece The Inferno. This large impressive work on 18 marble panels depicts the 34 Cantos of the journey of Dante and Virgil through the Inferno.

After being exhibited in a world preview at the Sala Brunelleschi, Instituto degli Innocenti in Florence in 1995 the work was not seen again until it was displayed on a walkway on the side of Santa Croce, where the accompanying photographs were taken.

Photographs by George Repin in 2014 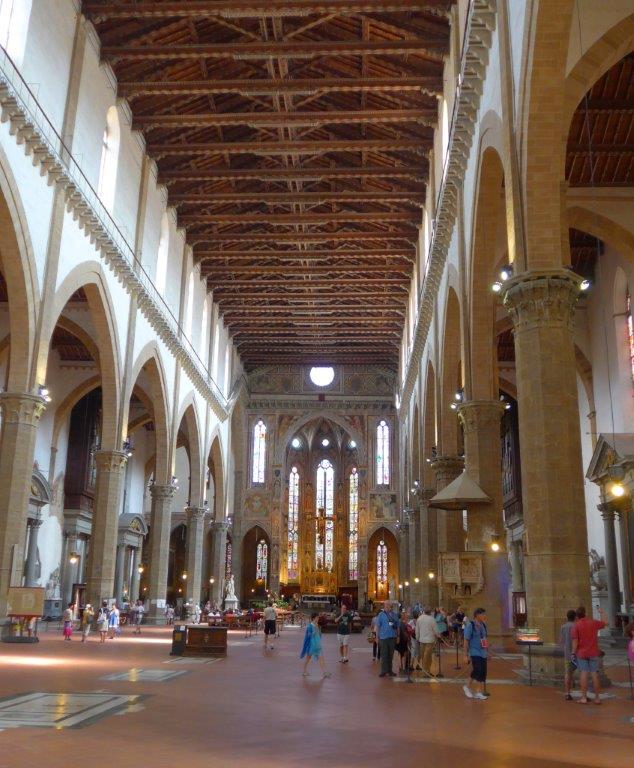 Above: Interior of Santa Croce. Tombs are on the Right.

Below: The empty tomb of Dante Alighieri. 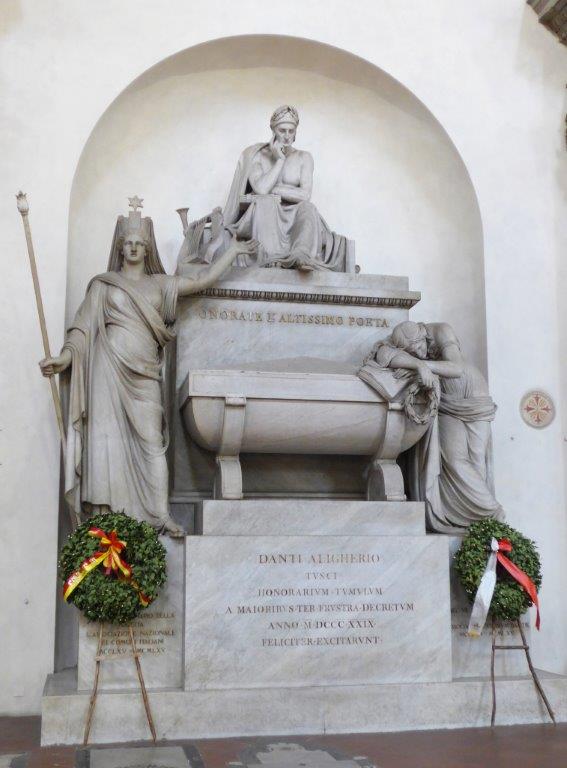 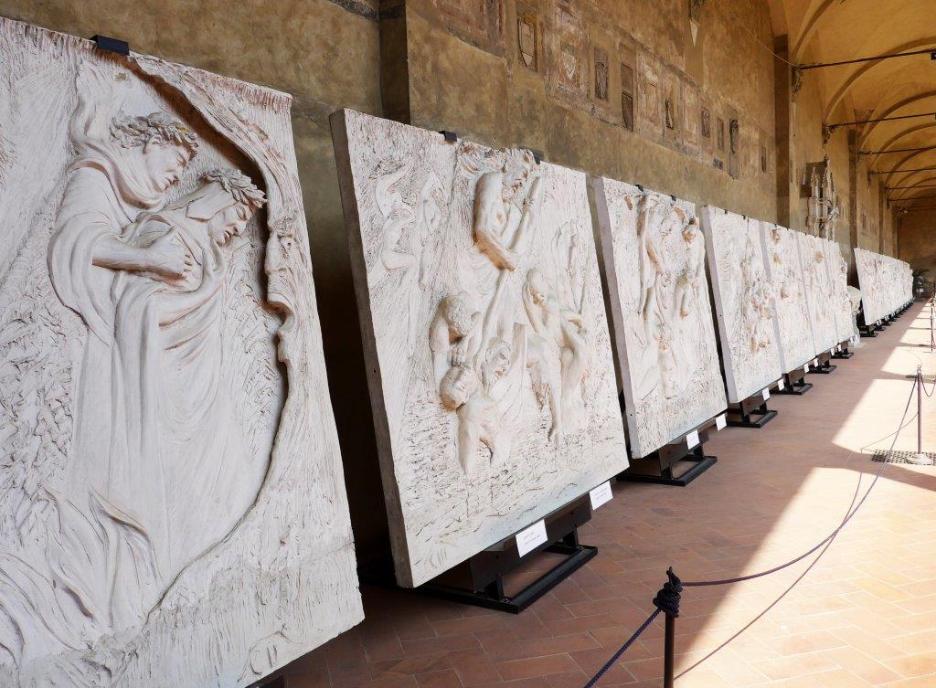 The marble sculptures displayed outside Santa Croce. (N.B. Figure of Dante with Virgil behind him) 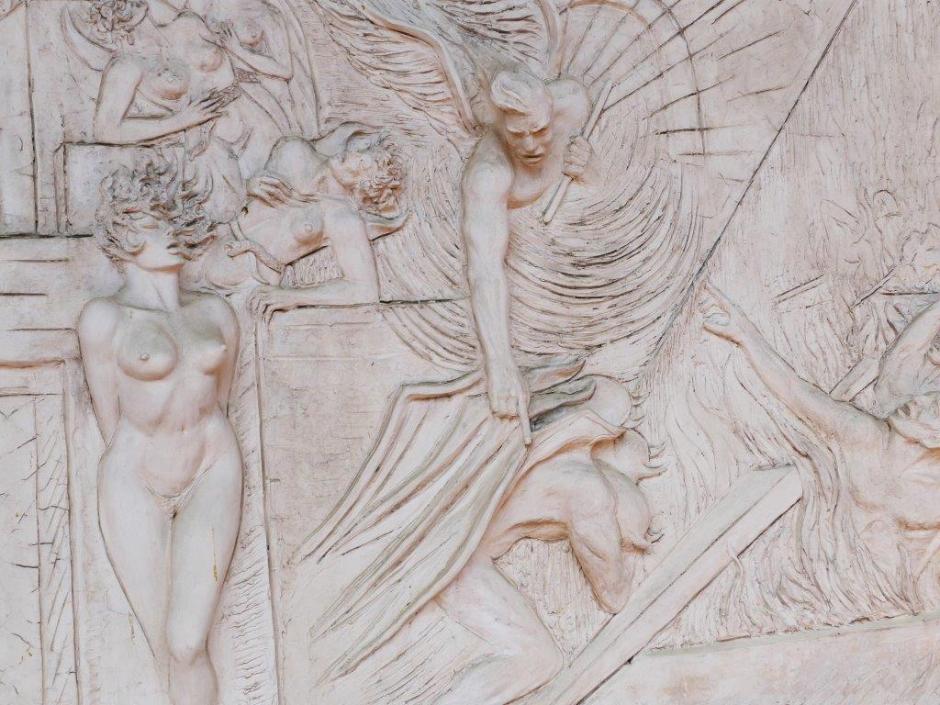 Close up view of one of the marble sculptures. 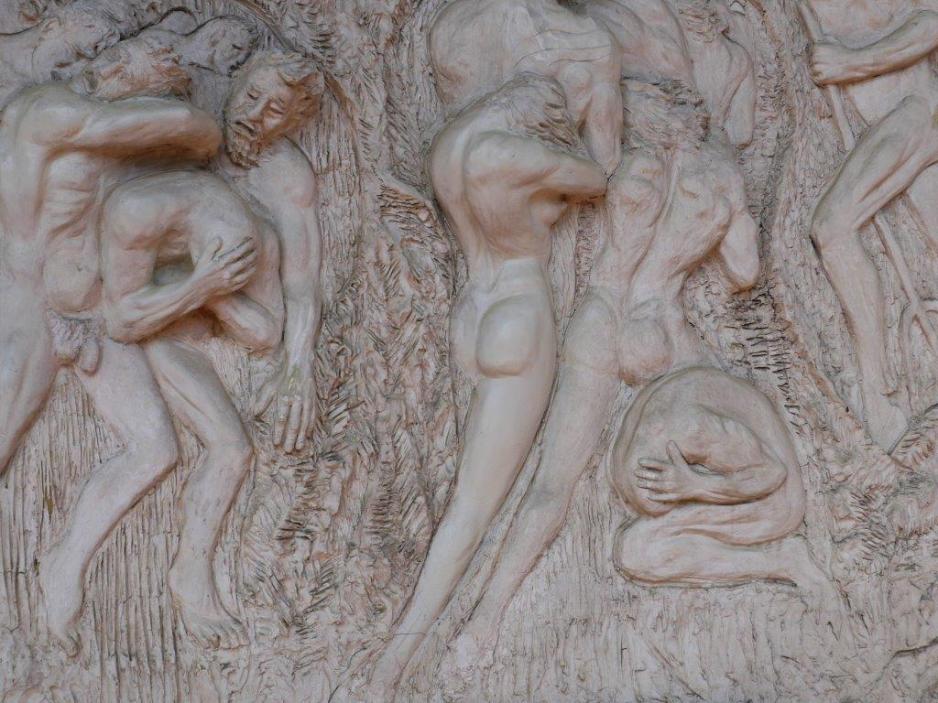 Close up view of one of the marble sculptures.

The Nineteen Thirties  Remembering Rowe Street  The Sydney Push  Saturday Night at the Movies  Shooting Through Like A Bondi Tram  A Stop On The Road To Canberra  City Department Stores - Gone and Mostly Forgotten  An Australian Icon - thanks to Billy Hughes  Crossing The Pacific in the 1930s  Hill End  The Paragon at Katoomba  Seafood In Sydney  How Far From Sydney?  Cockatoo Island Over The Years  The Seagull at the Melbourne Festival in 1991  Busby's Bore  The Trocadero In Sydney  Cahill's restaurants  Medical Pioneers in Australian Wine Making  Pedal Power and the Royal Flying Doctor Service  Pambula and the Charles Darwin Connection  Gloucester and the Barrington Tops  A Millenium Apart  Have You Stopped to Look?  Gulgong  Il Porcellino Olympia  Durham Hall  Sargent's Tea Rooms Pie Shops and Street Photographers The Ballet Russes and Their Friends in Australia  Hotels at Bondi  Alma Ata Conference - 1978 Keukenhof - 1954 The Lands Department Building and Yellowblock Sandstone  The Goroka Show - 1958  A Gem On The Quay  Staffa  The Matson Line and Keepsake Menus Kokeshi Dolls  The Coal Mine At Balmain  The Hyde Park Barracks  The Changing Faces Of Sydney From Pounds and Pence to Dollars and Cents Nell Tritton and Alexander Kerensky  Making A Difference In Ethiopia William Balmain  J C Bendrodt and Princes Restaurant Azzalin Orlando Romano and Romano's Restaurant  Waldheim  Alcohol in Restaurants Before 1955  King Island Kelp  The Mercury Theatre  Around Angkor - 1963  Angkor Wat 1963  Costumes From the Ballets Russe Clifton at Kirribilli  Chairman Mao's Personal Physician  The Toby Tavern The MoKa at Kings Cross The Oceaographic  Museum in Monaco  The Island of Elba Russian Fairy Tale Plates Meteora Souda Bay War Cemetery Barrow, Alaska Cloisonné Tripitaka Koreana Minshuku The Third Man Photographs and Memories Not A Chagall! Did You Listen? Did You Ask?Napier (Ahuriri, Maori) New Zealand Borobudur  Ggantija Temples Plumes and Pearlshells Murano  University of Padua Ancient Puebloe Peoples - The Anasazi  Pula  The Gondolas of Venice Cinque Terre  Visiting the Iban David The Living Desert Bryce Canyon National Park  Aphrodisias