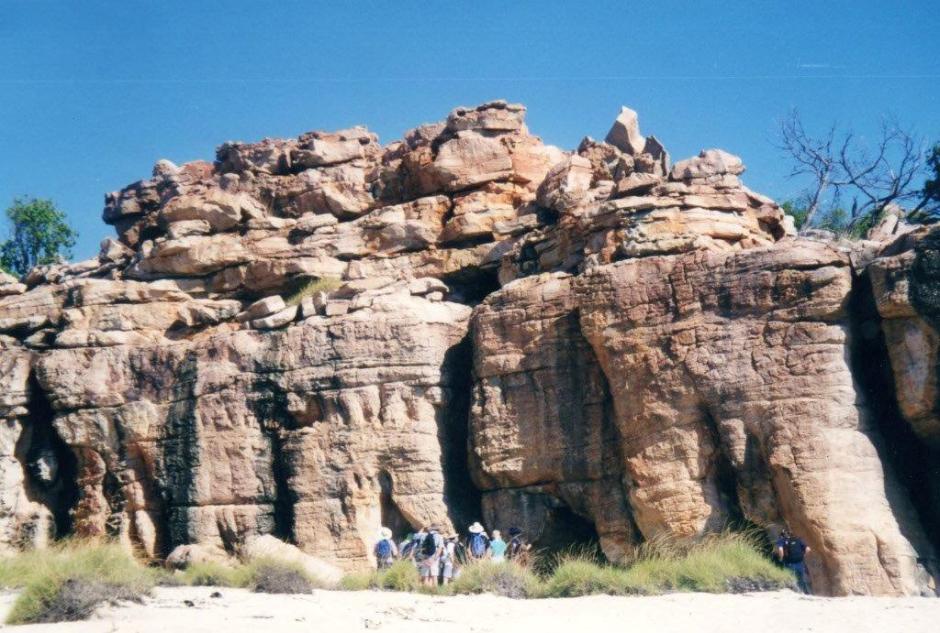 Bigge Island, the largest island in the Bonaparte Archipelago, lies approximately 6 kilometres off the Kimberley coast of Western Australia separated from the mainland by the Scott Strait.  Kalimburu about 100 kilometres to the east is the closest inhabited area.

Measuring approximately 22 Kms. north to south and 11 Kms. across it is very rugged being composed of ancient, highly weathered rocks of reddish quartz sandstone, whitish in places, with some patches of darker-coloured dolerites. Much of the island is bare rock with vegetation confined to valleys, gullies and channels.  The highest spot on the island is on the south coast, reaching a height of 143 metres, The Northern Quoll and the small Monjon Rock Wallaby populate the island.

Aboriginal rock art occurs in many sites on the island with significant galleries of both Gwion Gwion (“Bradshaw art”) and Wandjina art in the coastal caves.

According to the Kimberley Foundation

“There is a diverse range of rock art present in the Kimberley. This large variety of styles and sites reflects the cultural and artistic development in the region and can be understood to move through distinct Epochs as described in Grahame Walsh’s Rock Art sequence (published 1994) and the more recent Rock Art styles (2014).”

The best known, and recognised, of these styles of rock art are the Gwion and Wandjina periods.

Wandjina art was first recorded by George Grey, an explorer, in the Kimberley in 1837.  The art, found predominantly in the northwestern and central areas of the Kimberley, is associated directly with the indigenous myths in the area. The figures are distinctive for what appear to be haloes around their heads with mouthless faces and large round eyes, usually fringed with eyelashes, set on either side of an ovate nose.  The figures are believed to be over 4,000 years old. In some areas (but certainly not all) the local Aboriginal people repaint the figures. 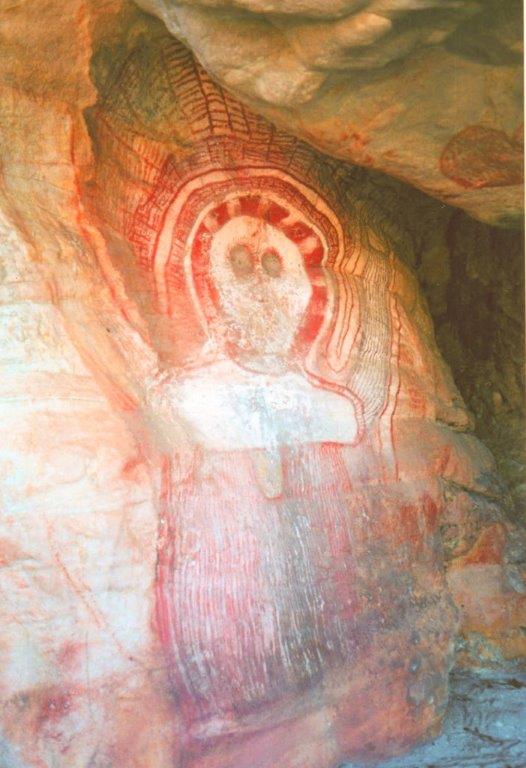 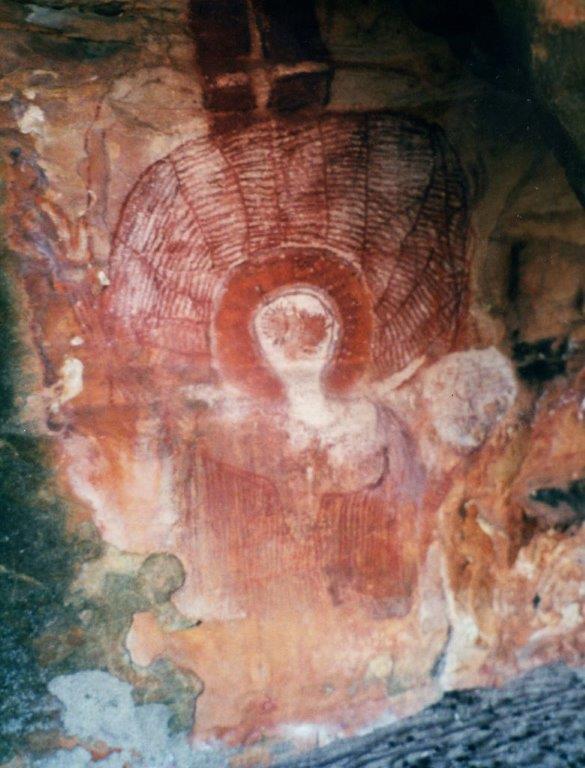 The Gwion Gwion art is quite different from Wandjina.  Sometimes referred to as Bradshaw Rock Art after the pastoralist Joseph Bradshaw, who, in 1891, while searching for suitable pastoral land in the Roe River area discovered an unusual type of rock art on an escarpment. The distribution and stylistic range of these paintings is quite distinctive and contrasts markedly with Wandjina.  Artistically Bradshaw figures are advanced both in technique and style and are best recognised from the depiction of graceful, active, long-bodied humans. The Bradshaw paintings predominantly depict human silhouette figures that appear to be suspended in the air or in a dynamic style that suggests running, hunting or dancing.

The identity of the painters of the figures and the age of the art is the subject of considerable debate. Sophisticated scientific dating methods have been used which have provided different answers. It appears that the current consensus may be that they are between 15,000 and 22,000 years old – but may be considerably older. 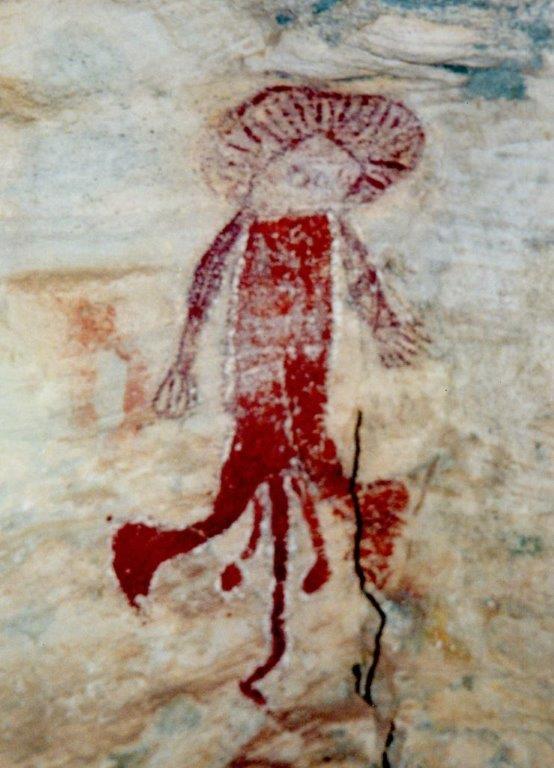 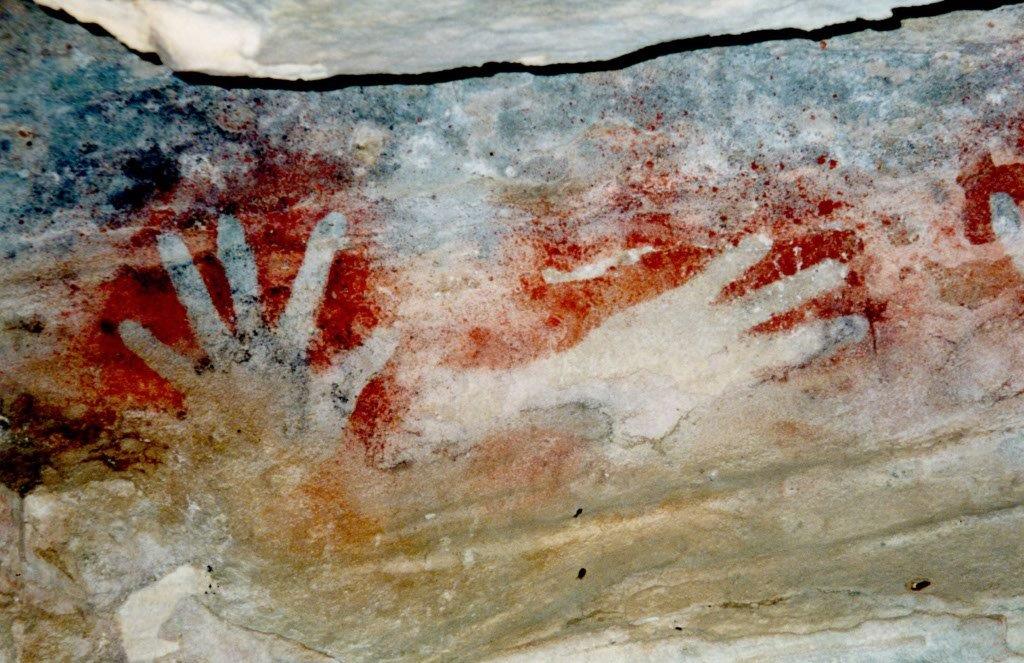 Graham Walsh developed a theory, based on the sophistication of Bradshaw art when compared with other art in the Kimberley, that the Bradshaw art was associated with a time before Aboriginal people populated Australia – that the art may be the product of an ethnic group which may have arrived from Indonesia only to be displaced by the ancestors of present-day Aboriginal people.

However, some Aboriginal rock art obviously is much more recent with images of sailing ships and figures obviously smoking pipes. Whether they depict Dutch, English or Portuguese sailors of the 1600s or French sailors of Baudin’s exhibition in 1801-03 probably we will never know.

Photographs by George Repin in June 2002 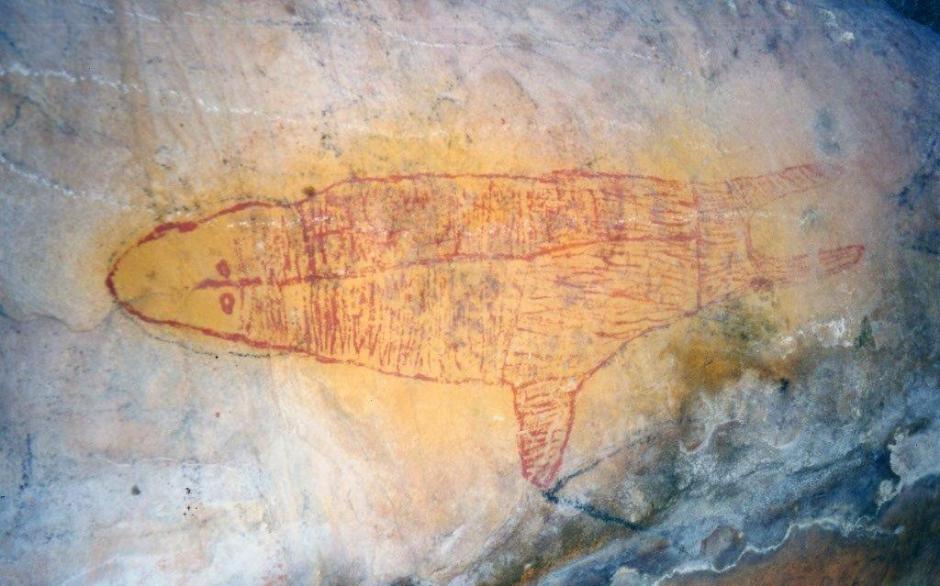 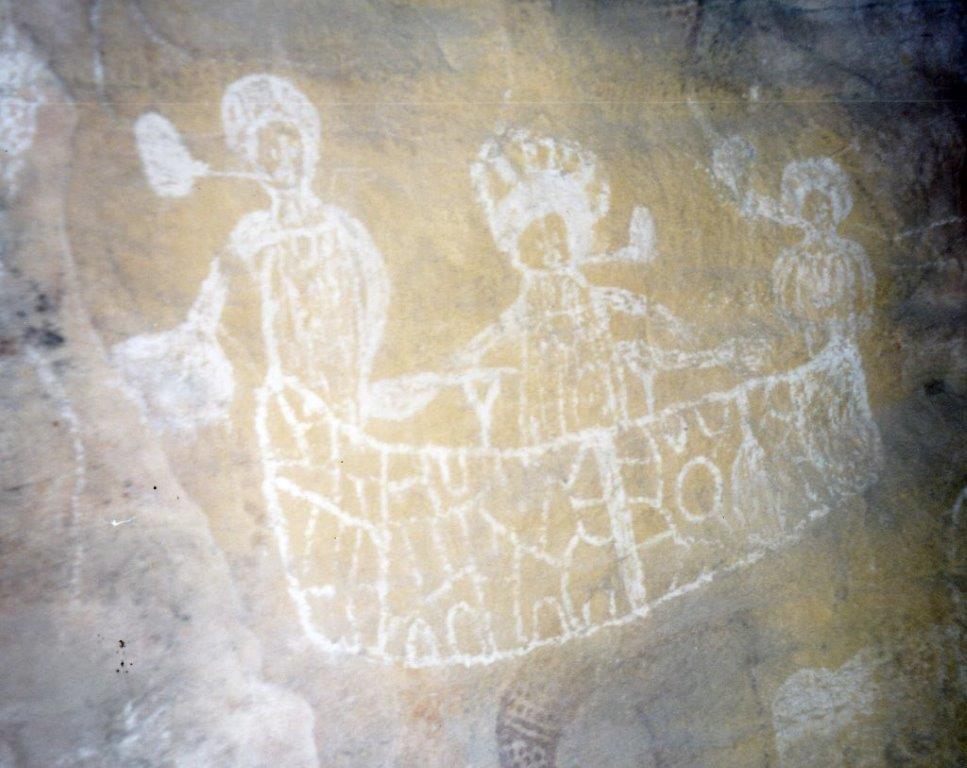 A boat with men with pipes. 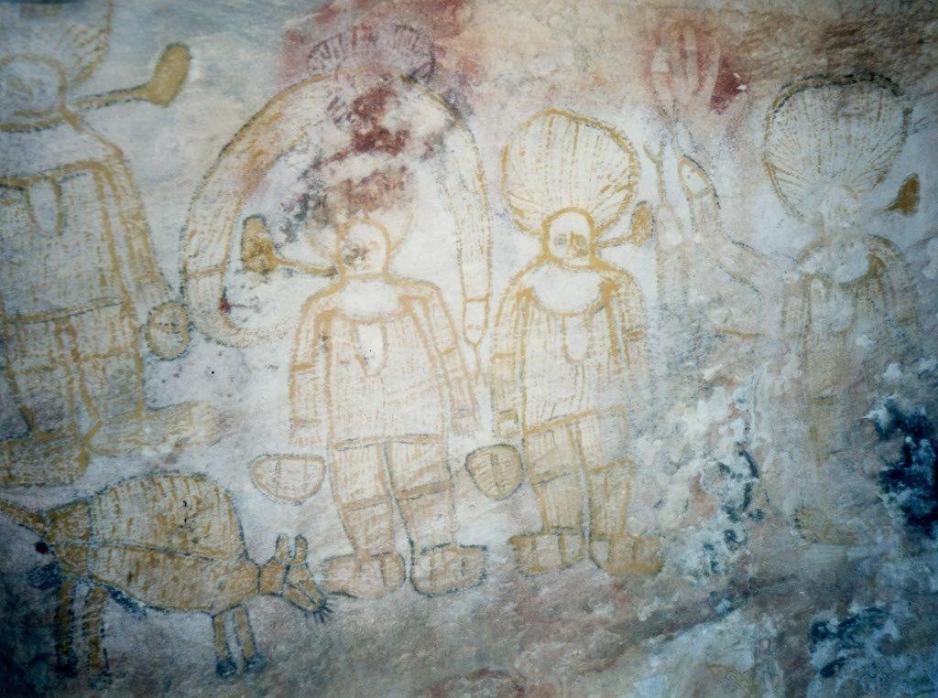 Clothed figures with pipes and a ?dog. 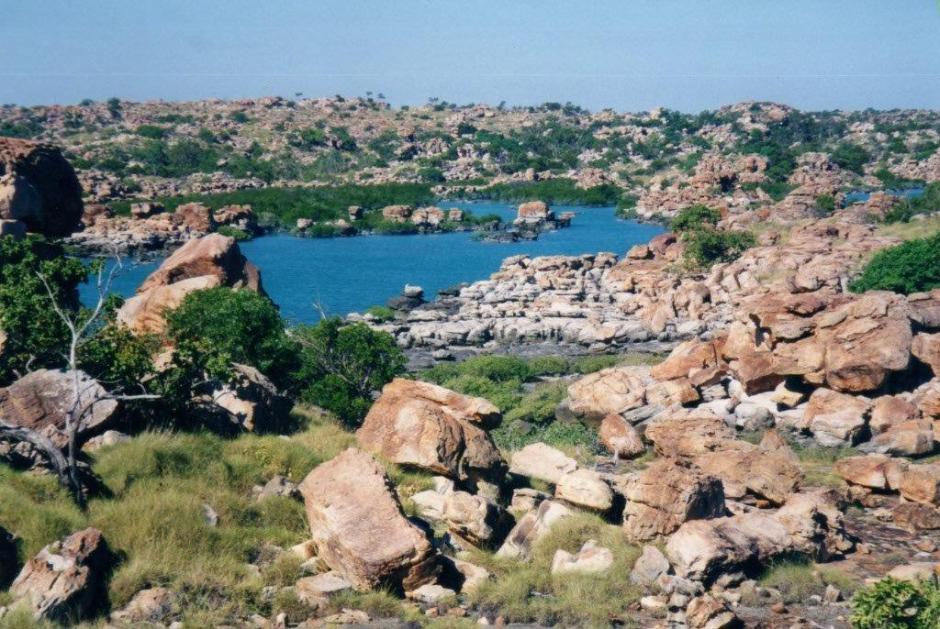 The Nineteen Thirties  Remembering Rowe Street  The Sydney Push  Saturday Night at the Movies  Shooting Through Like A Bondi Tram  A Stop On The Road To Canberra  City Department Stores - Gone and Mostly Forgotten  An Australian Icon - thanks to Billy Hughes  Crossing The Pacific in the 1930s  Hill End  The Paragon at Katoomba  Seafood In Sydney  How Far From Sydney?  Cockatoo Island Over The Years  The Seagull at the Melbourne Festival in 1991  Busby's Bore  The Trocadero In Sydney  Cahill's restaurants  Medical Pioneers in Australian Wine Making  Pedal Power and the Royal Flying Doctor Service  Pambula and the Charles Darwin Connection  Gloucester and the Barrington Tops  A Millenium Apart  Have You Stopped to Look?  Gulgong  Il Porcellino Olympia  Durham Hall  Sargent's Tea Rooms Pie Shops and Street Photographers The Ballet Russes and Their Friends in Australia  Hotels at Bondi  Alma Ata Conference - 1978 Keukenhof - 1954 The Lands Department Building and Yellowblock Sandstone  The Goroka Show - 1958  A Gem On The Quay  Staffa  The Matson Line and Keepsake Menus Kokeshi Dolls  The Coal Mine At Balmain  The Hyde Park Barracks  The Changing Faces Of Sydney From Pounds and Pence to Dollars and Cents Nell Tritton and Alexander Kerensky  Making A Difference In Ethiopia William Balmain  J C Bendrodt and Princes Restaurant Azzalin Orlando Romano and Romano's Restaurant Waldheim  Alcohol in Restaurants Before 1955  King Island Kelp  The Mercury Theatre  Around Angkor - 1963  Angkor Wat 1963  Costumes From the Ballets Russe Clifton at Kirribilli  Chairman Mao's Personal Physician  The Toby Tavern The MoKa at Kings Cross The Oceaographic  Museum in Monaco  The Island of Elba Russian Fairy Tale Plates Meteora Souda Bay War Cemetery Barrow, Alaska Cloisonné Tripitaka Koreana Minshuku The Third Man Photographs and Memories Not A Chagall! Did You Listen? Did You Ask?Napier (Ahuriri, Maori) New Zealand Borobudur  Ggantija Temples Plumes and Pearlshells Murano  University of Padua Ancient Puebloe Peoples - The Anasazi  Pula  The Gondolas of Venice Cinque Terre  Visiting the Iban David The Living Desert Bryce Canyon National Park  Aphrodisias  The Divine Comedy Caodaism  Sapa and local Hill People  A Few Children Cappadocia  Symi Jean-Marie Tjibaou Cultural Centre