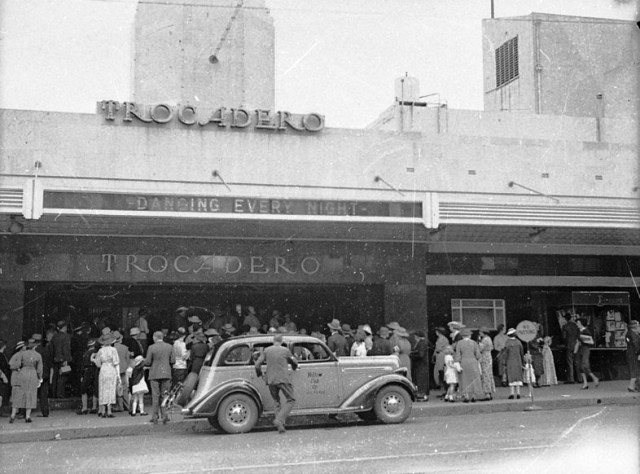 Above:  Exterior of The original Trocedero and Sam Hood Picture of 'Radio station 2CH's Children's Christmas party, Trocadero', Date of Work  22/12/1936, Home and Away - 30090, Courtesy State Library of NSW 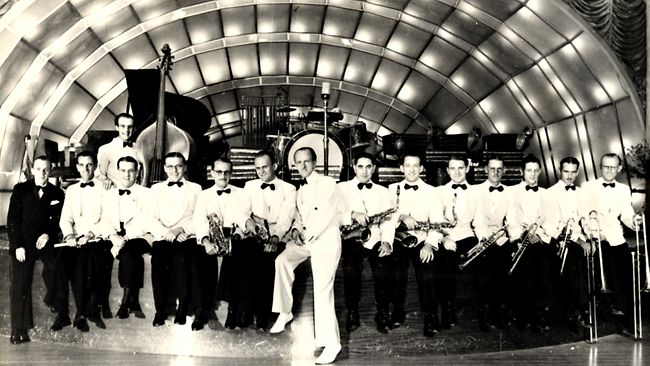 Above: Frank Coughlan and his band on the Trocadero stage. 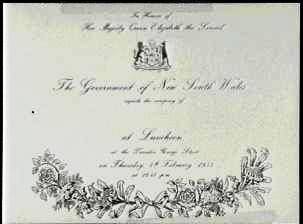 THE TROCADERO IN SYDNEY

The sight of gentlemen in full evening dress (white tie and tails) or, at the very least, in dinner jackets with black ties, each struggling with a heavy overnight bag, a sports bag or a small suitcase, entering premises where a dance was being held, today would raise eyebrows.  Yet their accompanying ladies, dressed to the nines in beautiful ball-gowns, often with lovely corsages pinned to their frocks, seemed oblivious to a sight which today would not pass unnoticed.  In the days when liquor laws prevented dance venues such as The Trocadero from supplying alcoholic beverages the men carried the evening’s supply of “grog” in the bags – bottles of beer, whiskey, soda water and some soft drinks – but never wine (in those days few people drank what they called “plonk”).

Immediately after World War II and well into the fifties well-attended Balls were regularly organized by many organizations.  In those days The Trocadero (affectionately known as the “Troc”) filled a need because it was the only place big enough to cater for large functions staged by major charities, such as the Black and White Committee, for fund-raising purposes, by University undergraduate societies, trade and professional associations, hospital nursing and medical groups, sporting clubs and the like.  Balls were very popular.

Opened on 3 April 1936, at the height of the Depression, as an initiative of the entrepreneur, Jim Bendrodt The Trocadero, was a mecca for those enjoying ballroom dancing and jazz immediately before World War II.  It was referred to as a “Palais de Dance” – never as a dance hall.

It was a large single storey building on the West side of George Street between Bathurst and Liverpool Streets decorated inside in the art deco style.

Entering from George Street up a few wide steps patrons arrived in a wide carpeted foyer where they could meet and mingle.  The well-sprung dance floor was in the middle of the building under a high ceiling.  The thirteen piece dance band was at the far, western end of the dance floor on a flashy brightly illuminated raised stage (typical of the “big band” era). It played in the then 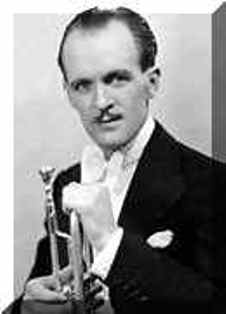 popular styles of Glenn Miller and Tommy Dorsey. For many years it was led by Frank Coghlan, a trumpet player and arranger who was greatly influential in the development of jazz in Australia. Coghlan was a dashing figure in formal attire with a trim physique and a pencil thin moustache.

Columns around the dance floor supported the lower ceiling of a surrounding carpeted area where patrons sat at long tables covered with white table clothes.  The tables were bare except for glasses and large numbers on stands to identify the areas booked by individual parties.  On arrival the “grog” was unloaded and the bags pushed under the tables.  A photographer was always present in the foyer and, later in the evening, did good business photographing couples and groups wanting a memento of the evening. “Proofs” could be viewed and prints ordered at the photographic firm’s offices a few days later.

However The Trocadero catered for more than Balls.  It arranged functions for many distinguished visitors to Sydney. During her first visit to Australia in 1954 a luncheon was held for Queen Elizabeth. Other visitors included Field Marshall Viscount Montgomery in 1947 and President Lyndon B Johnson of the United States of America.

For many years it was the meeting place of the Rotary Club of Sydney. It also was the venue for exhibitions and trade shows.

At the end of a Ball at The Trocadero the last tune always played was “Good night sweetheart – till we meet tomorrow”.  There was no tomorrow for the Trocadero after 5 February, 1971 when it closed, was demolished and replaced by a cinema complex.  A bronze plaque fixed, on 13 July, 2002, to the southern wall of the foyer of the cinema complex marks the site where The Trocadero had stood.