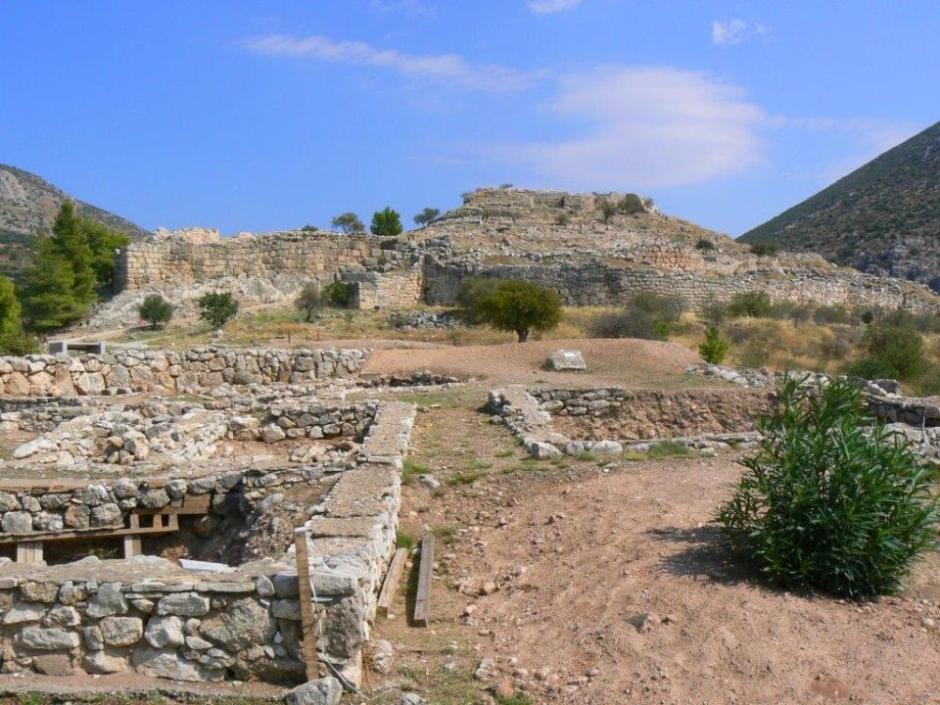 Looking up to Mycenae from the Plain of Argolis

Mycenae is on a hill top overlooking the Plain of Argolis with a distant view of the Saronic Gulf, about 90 Kms. southwest of Athens.  Its name has been associated with the first advanced civilization in mainland Greece during the last phase of the Bronze Age of Ancient Greece (c. 1600 – 1100 BCE) - Mycenian Greece - whose influence extended throughout what is present day Greece, the Aegean Islands, the shores of Asia-Minor and Crete.  The reasons for its rapid decline between c.1250 and c.1100 BCE and subsequent break up remain the subject of intense debate with many theories propounded but no satisfactory explanation generally accepted.

As an acropolis site Mycenae was continuously inhabited from the early Neolithic period. (Neolithic Period or New Stone Age beginning about 10,200 BCE).  In the second millennium BCE it was a military stronghold which dominated much of southern Greece.

As the most prominent site within Mycenian Greece the city grew in importance, was extensively fortified and became the site of power of warrior chieftains.

At about 1350 BCE the fortifications on the acropolis and surrounding hills were rebuilt in a style known as cyclopean because the blocks of stone were so massive that, in a later age, they were thought to be the work of one-eyed giants called the Cyclops.  The walls were built of large unworked boulders more than 8 metres thick and weighing several metric tonnes, roughly fitted together without mortar.  The Lion Gate was built in the 13th Century BCE at the time of the second extension of the citadel. 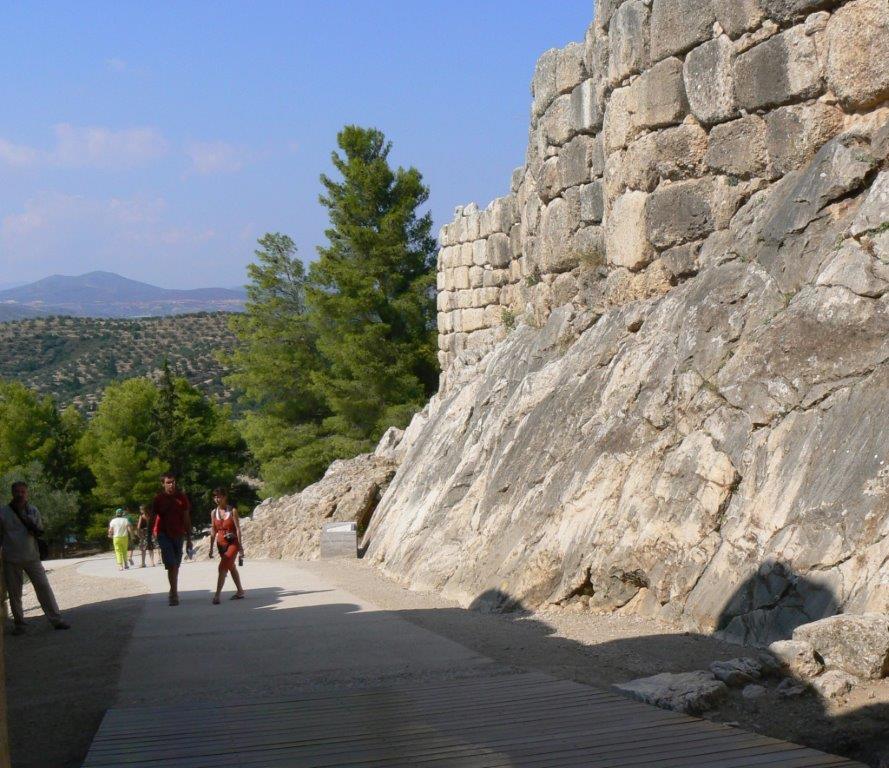 Citadel wall on approach to the Lion Gate 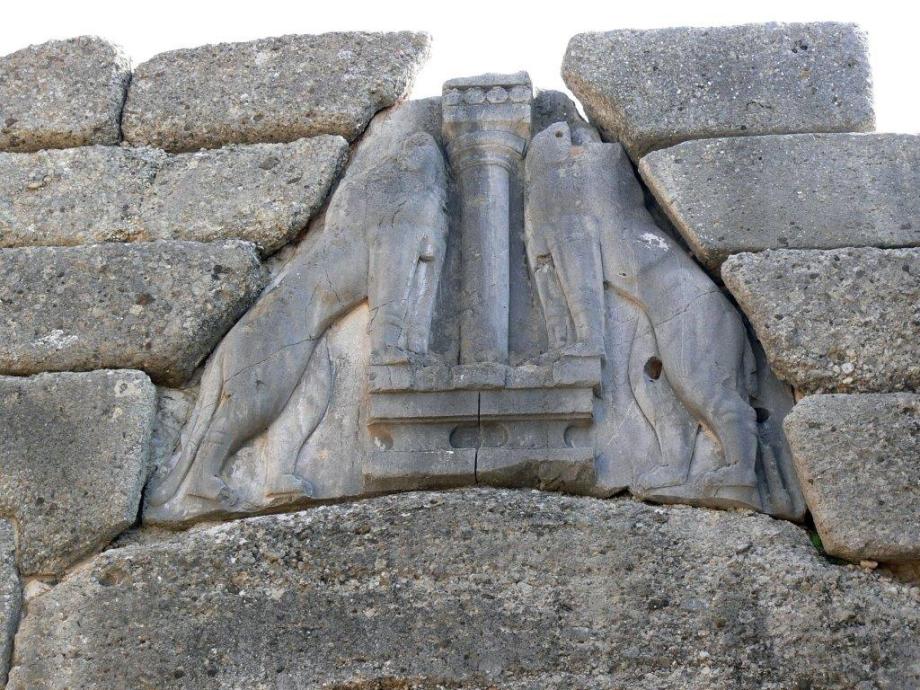 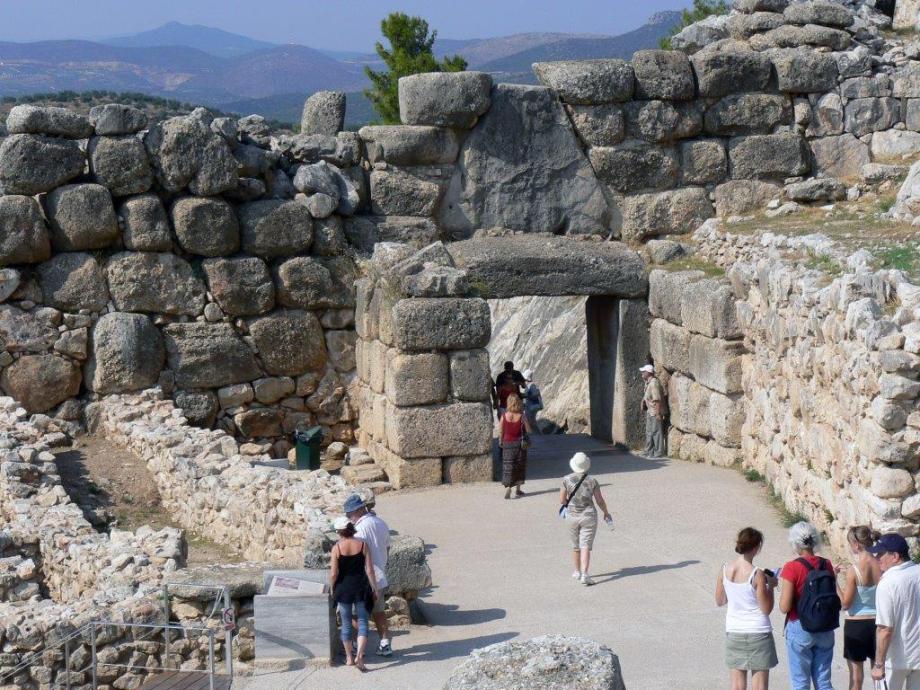 Courtyard inside the Lion Gate

Within these walls successive monumental palaces were built.  The remains of the most recent can still be seen on the acropolis of Mycenae. 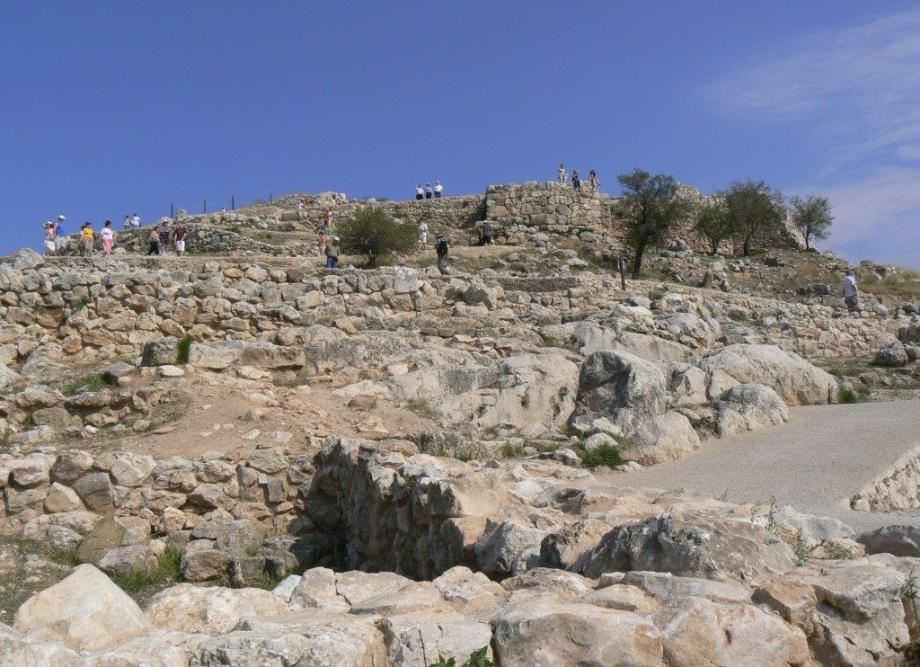 Looking up to the site of the palace on the acropolis

At the time of the rebuilding of the fortifications the so-called Grave Circle A was enclosed within the citadel while Grave Circle B was left outside.  During the earlier years of Mycenae burials of important chieftains and their families were carried out in shaft graves (The Shaft Grave Era 1600-1250 BCE) in the areas now referred to as Grave Circles A and B.  The bodies were buried with rich burial goods (including weapons, golden jewellery and other golden artefacts, signifying the importance of the dead). In some case the faces of the dead were covered with beaten gold “masks”.  As time proved this method of burial protected the graves from being plundered.

At the end of the Shaft Grave Era a new and more imposing type of elite burial was adopted – the tholos – a large burial chamber with a high vaulted roof and a straight stone-lined entry passage.  Being more visible all the tholi have been plundered either in antiquity or more recent times – and are empty. 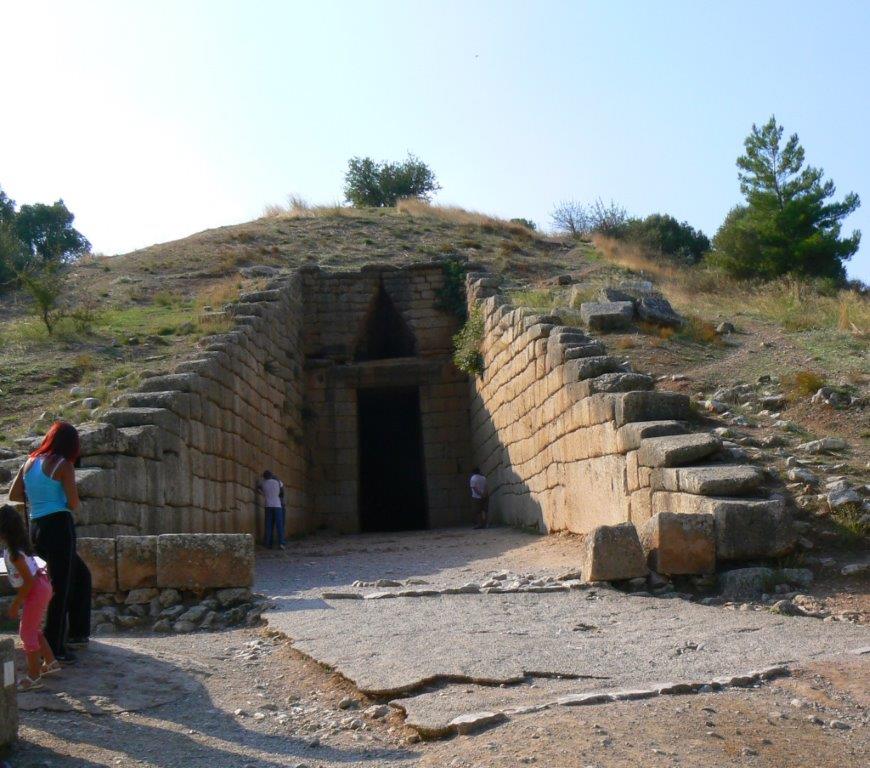 Outside appearance of a Tholos 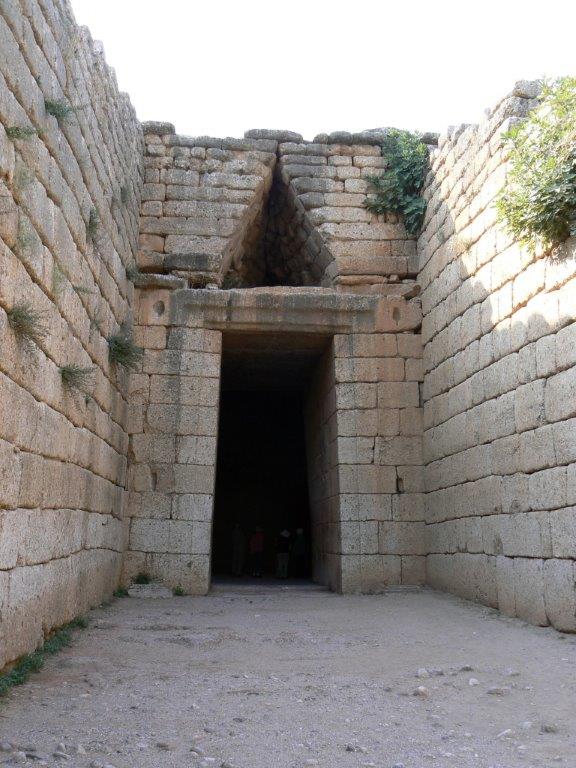 Entrance to a Tholos

Excavations have been carried out at or around Mycenae since 1841 and are continuing at various parts of the site to this day.

Heinrich Schliemann, came to Mycenae after carrying out excavations at Troy, which attracted considerable criticism, and without authority dug a number of shafts around the citadel of Mycenae.  After obtaining approval from the Archaeological Society of Athens in 1876 he excavated at the site of Grave Circle A and exhumed skeletons in lavishly decorated shrouds and a rich hoard of grave goods including five magnificent beaten-gold burial masks one of which he claimed, wrongly, to be the death mask of the legendary king Agamemnon.  Many of these items are now displayed in the Archaeological Museum in Athens. 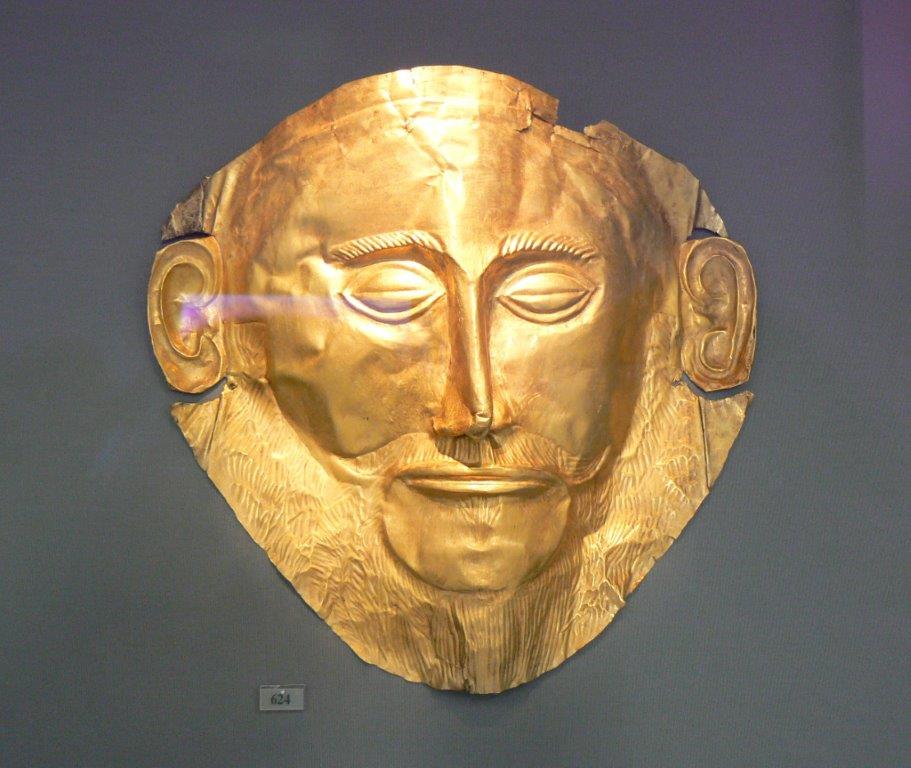 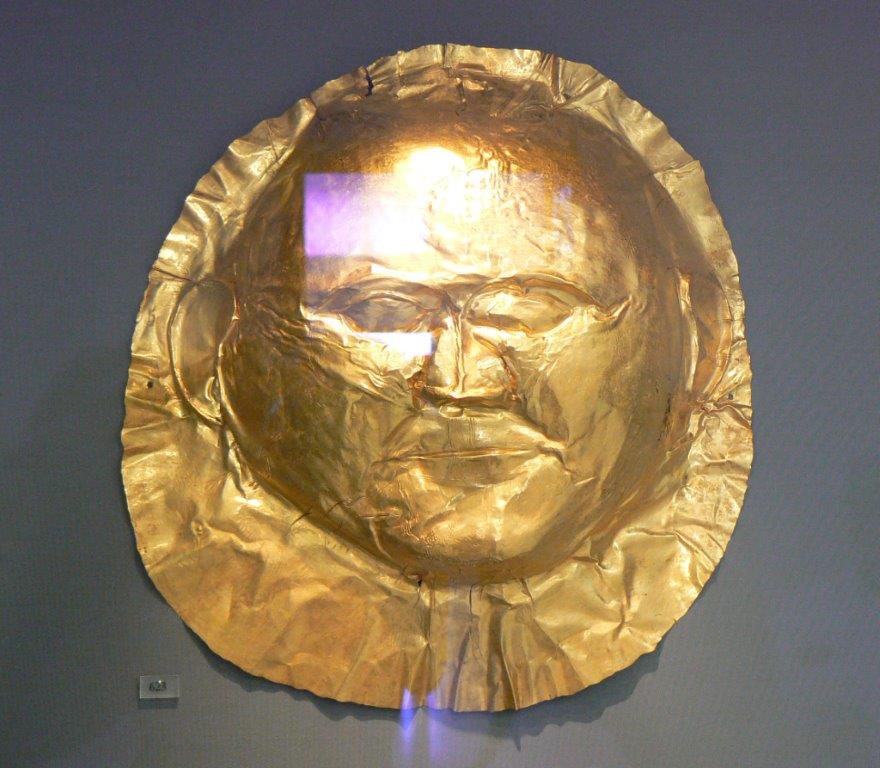 Photographs by George Repin in 2006 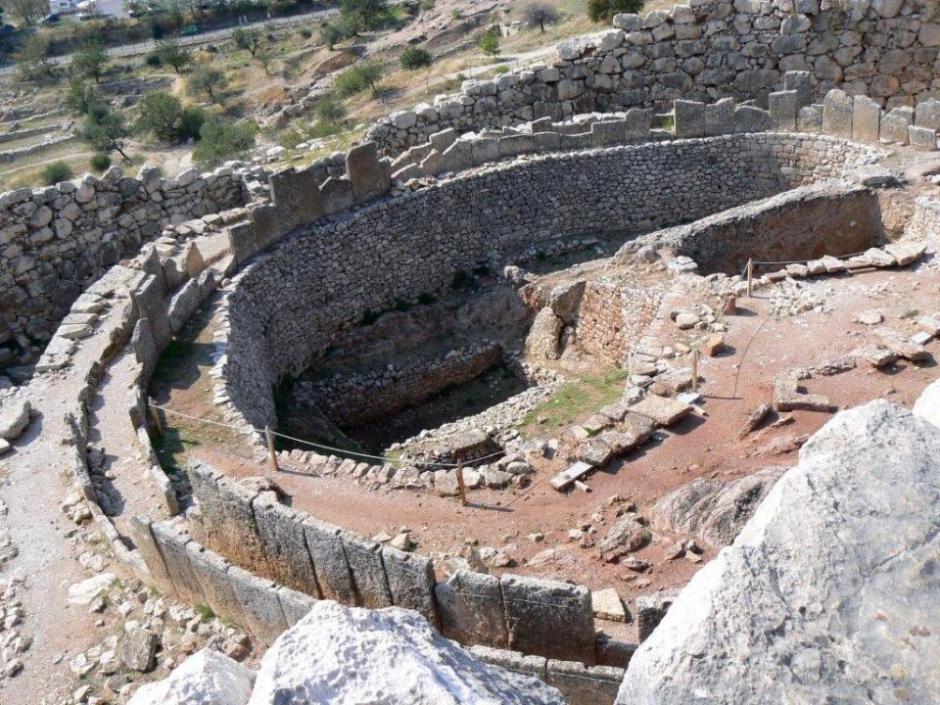 Above and Below: Grave Circle A 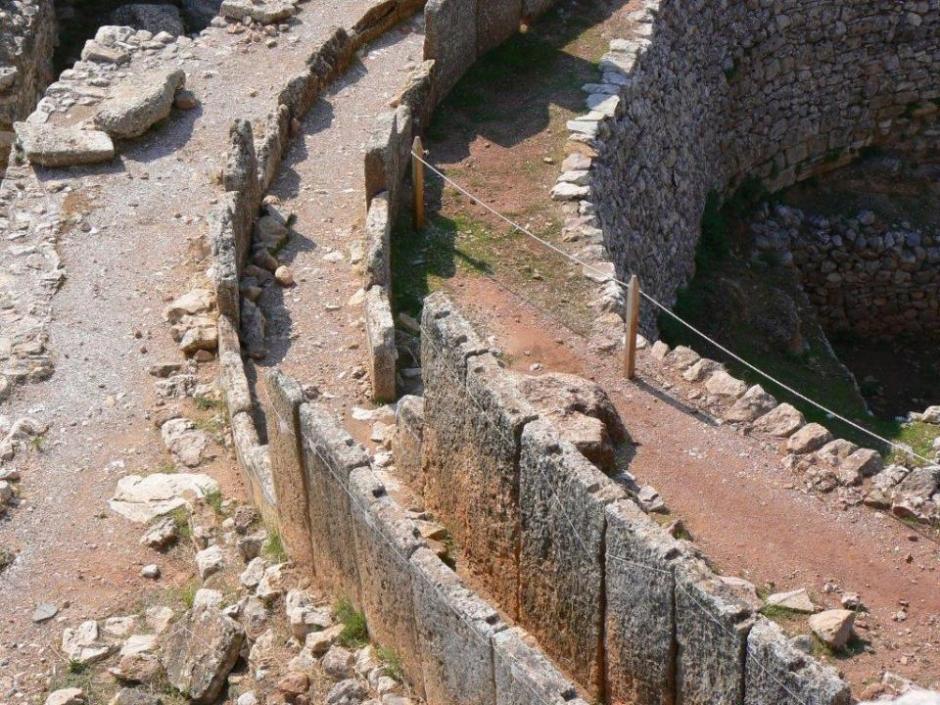 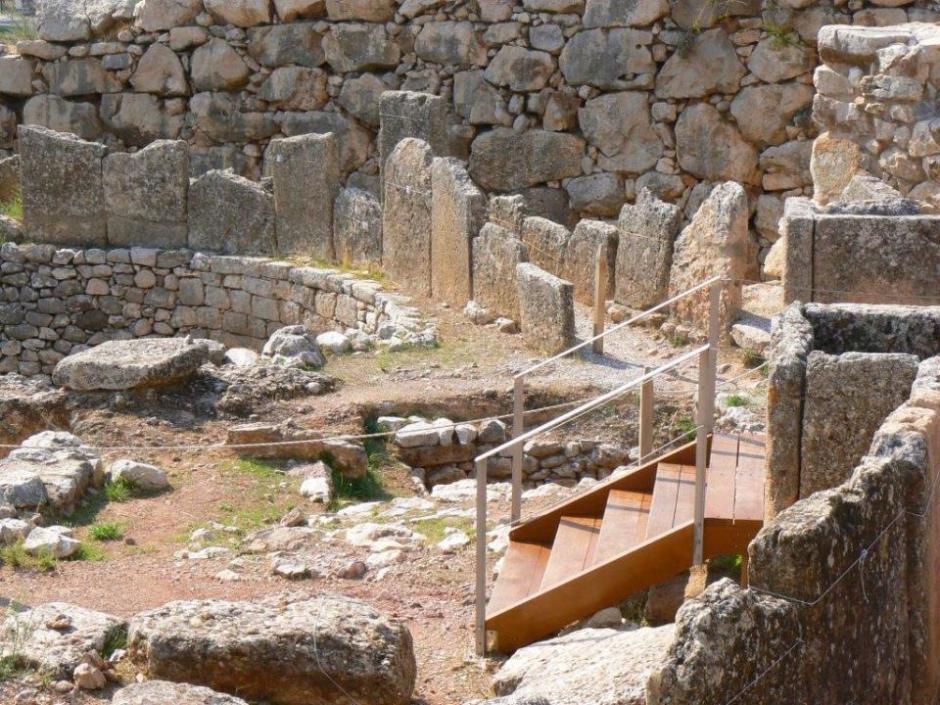 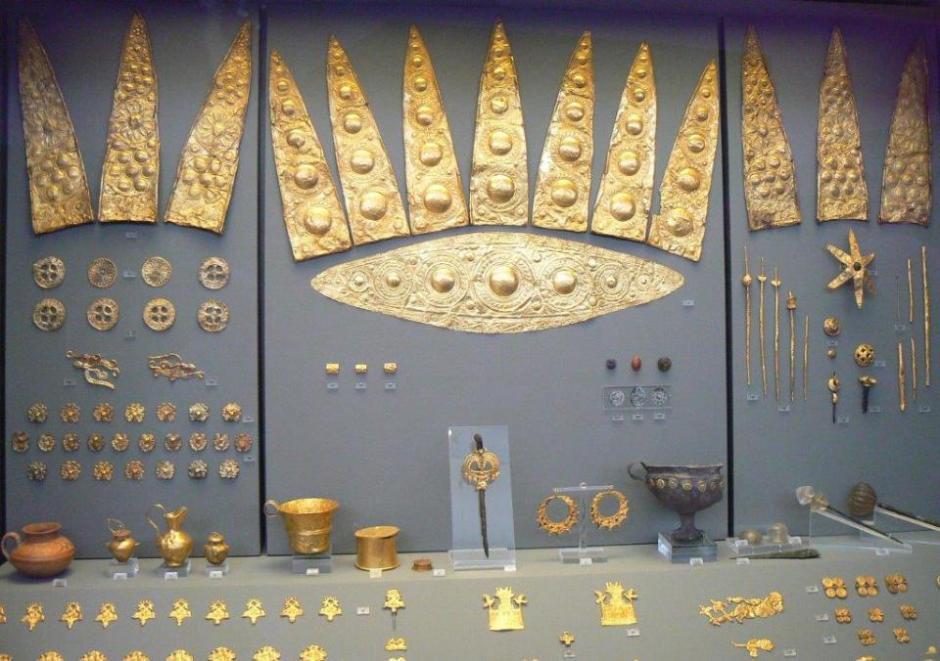 Above: Display of gold items from Mycenae

Below: Gold necklace from Mycenae 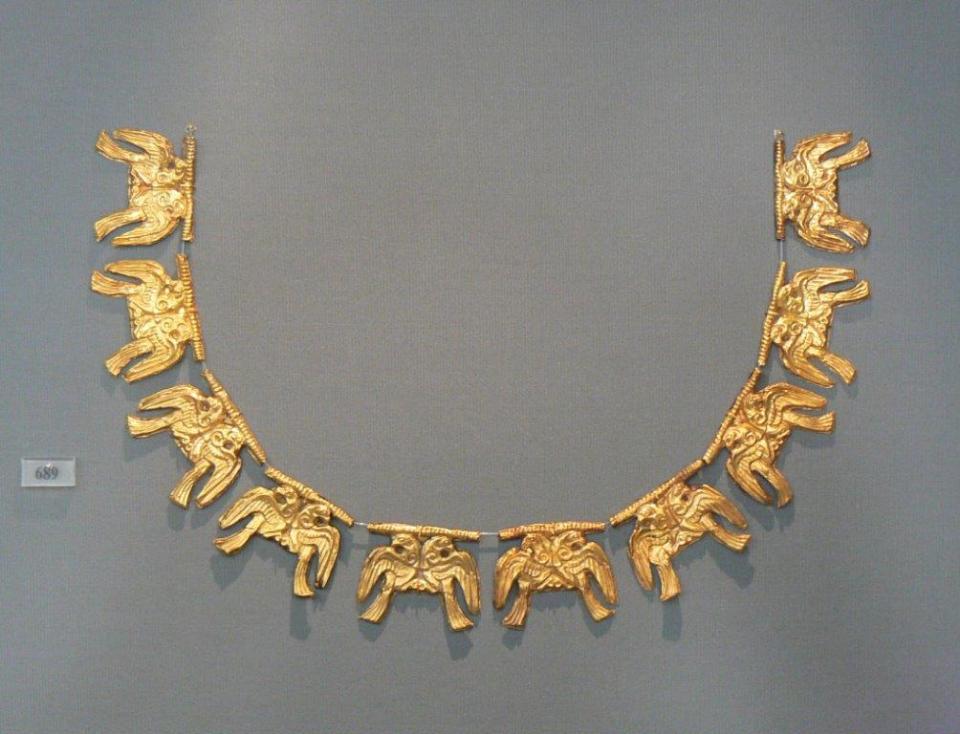