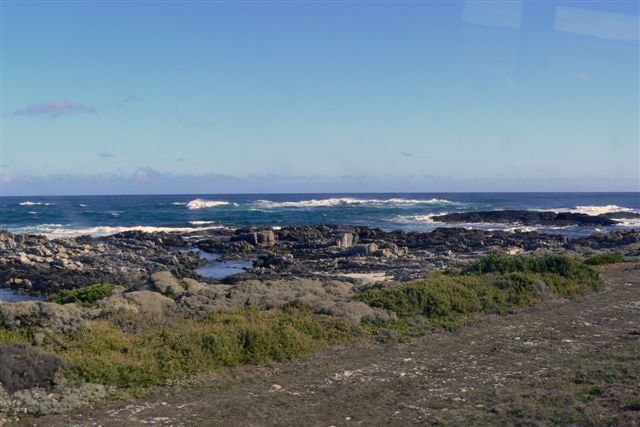 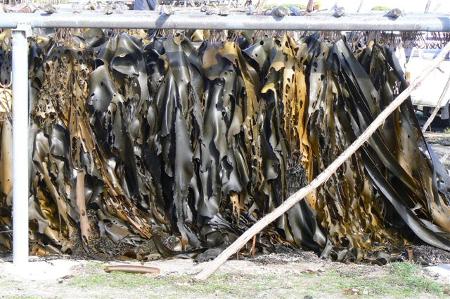 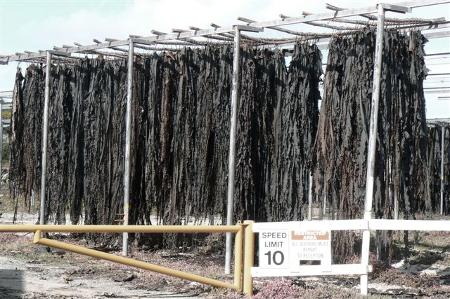 King Island, in the Roaring Forties approximately 80 Kms. off the north-western tip of the main island of Tasmania is known for the range and quality of its dairy products – luscious King Island cream and varieties of distinctive premium, hand crafted cheeses – and for its prime, quality graded grass-fed beef.

It is not as well known for an important, though small, export industry based on the drying and milling of storm cast Bull Kelp (Durvillea Pototorum) collected on the beaches, mainly on the west coast of the island.

Kelp, with brown leathery fronds up to 8 metres in length, grows on rocks at sea. It breaks away during heavy weather and storm activity floating on to beaches where it is collected by “suppliers” and taken to King Island Kelp Industries at Currie on the island where it is processed.

Using S – shaped hooks the Kelp plants are hung on poles which are placed on racks at a conveniently low level for this to be easily done.  The Kelp is then mechanically lifted from the lower racks to higher level racks for storage and atmospheric pre-drying. After about two weeks the air-dried kelp is fed into a wood-fired drying system in which sufficient moisture is removed so that the kelp can be stored. It is now brittle. In the next stages of processing the kelp is milled to a granular form.  The standard milled product is packed into one tonne bags for export while the finer material is sieved and packed into 20 Kg. bags for the domestic market.

The kelp delivered by each “supplier” is weighed separately and the supplier paid on the weight of dried kelp product. While the Company employs less than ten people, many more are involved as “suppliers” collecting kelp.

Kelp is rich in minerals and produces algin a complex carbohydrate (polysaccharide) useful in various industrial processes.  Algin is added to ice cream before freezing to prevent crystallisation and it is used as a suspending and emulsifying agent in other food production.

It is also used in making salad dressings, detergents, toothpaste and, apparently, has a place in the manufacture of some tyres.

Since 1976 King Island Kelp Industries has exported more than 80,000 tonnes of dried Bull Kelp (equivalent to about half a million tonnes of wet kelp).

Most of the company’s production is bought by an international organisation, ISP Alginates, which controls about 30% of the world market in alginates. Most King Island kelp goes to Scotland, with some to Norway.

Alginate products have thousands of different applications. King Island Kelp Industries point out that, “in one form or another, it is very likely that you eat, drink, wear or in some other way enjoy the benefit” of King Island kelp.

Acknowledgement: Information on the processing of kelp on King Island has been derived from a personal visit to King Island Kelp Industries in 2009 and from the Company’s website.