Cappadocia, a region of great historical and cultural interest in Eastern Anatolia, lies in the centre of present day Turkey.  It is notable for its fantastic topography of honeycombed hills and towering boulders set in the stark Anatolian plain. 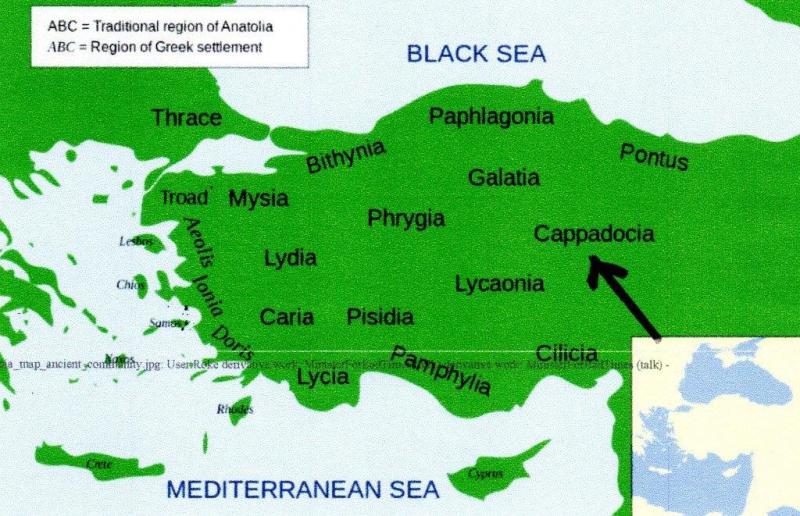 The earliest record of Cappadocia dates from the late 6th Century BCE when it appears, in trilingual inscriptions, as one of the countries of the Persian Empire.  It has a long recorded history.  In the late Bronze Age (around 1,600 BCE) it was the homeland of the Hittite power centred at Hattusa.  In later periods the Persians and the Romans held sway.

The unique topography had its origin in the Cenozoic era when the area was the scene of intense volcanic activity with three major volcanoes tossing out lava, ash and basalt boulders, resulting in the gradual buildup of a plateau.  Over time volcanic ash was transformed into tufa cemented by chalk carried by rivers and deposited into lakes.  In places the tufa was almost 150m thick. While the inside of the tufa was relatively soft the surface was hardened by contact with air.  Subsequent erosion by rain, wind and earthquakes produced the strange landscape.  The softer tufa eroded while the hard basalt and andesite rocks remained.  In the area near Gӧreme the rocks eroded into hundreds of spectacular pillars and minaret forms and where they sat on the tops of columns they produced the so-called fairy chimneys. 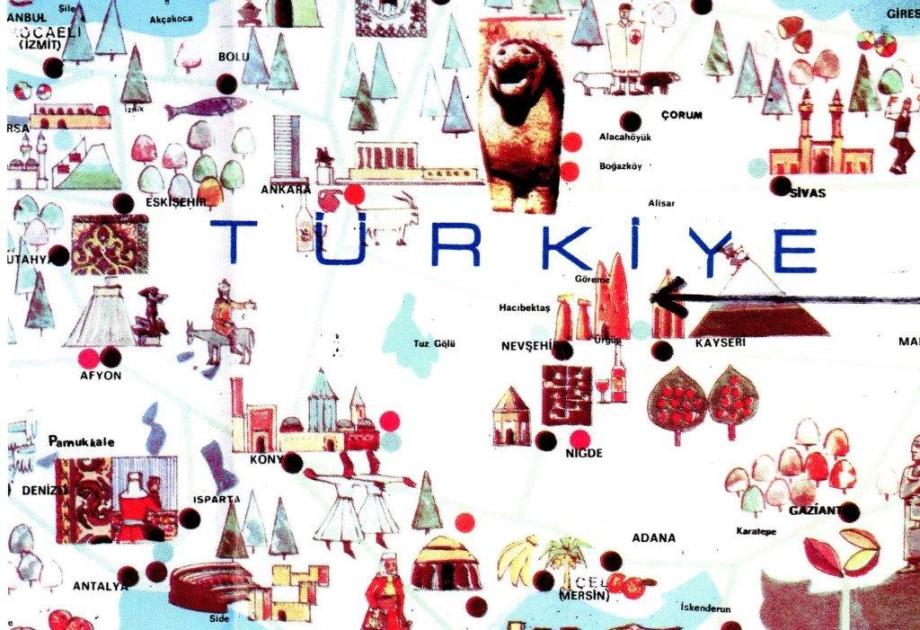 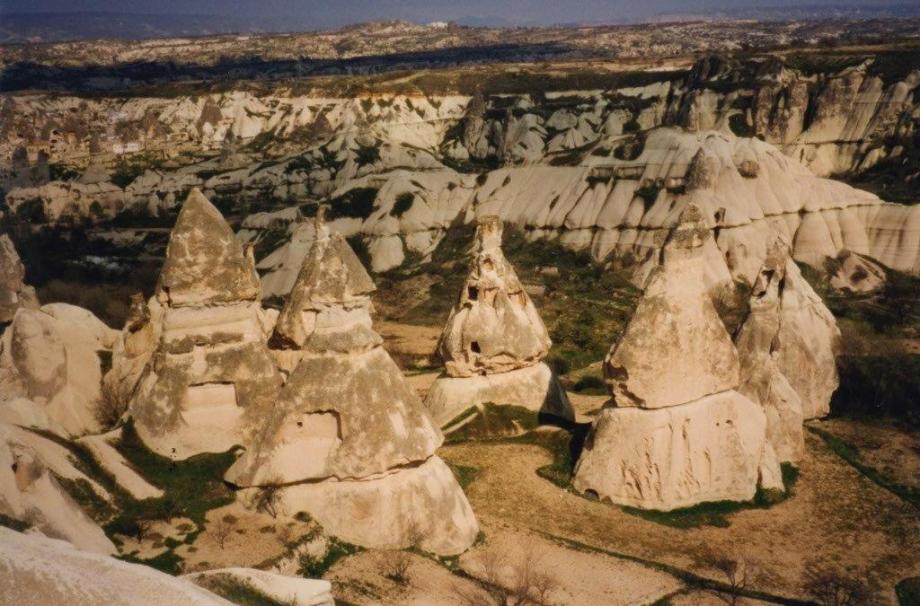 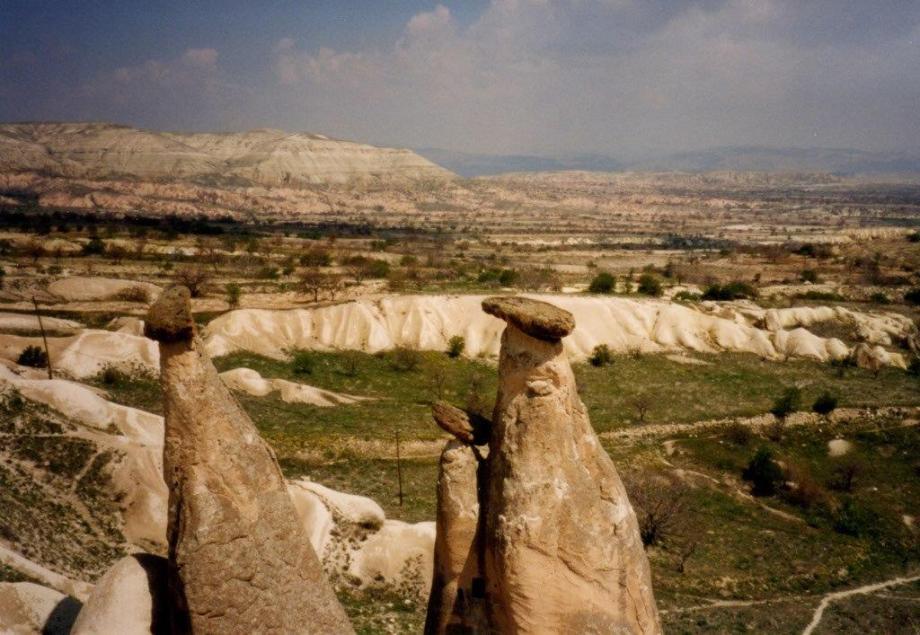 A fairy-tower with valley in the distance.

The character of tufa provided a relatively easy way to excavate not only subterranean habitations but also galleries in the towers and pinnacles so that, as the persecution of Christians in Palestine forced them to seek safe havens elsewhere, the natural structure of Cappadocia offered ready refuge and an adoptive country.

They carved out churches, chapels, monasteries and nunneries in the soft tufa and, to protect themselves from marauders they developed defensive devices so they could live in relative safety. From the end of the 8th Century they began to decorate their rock-cut churches and chapels with colourful icons and frescos.  Because tufa does not absorb paint it proved an excellent base for murals.  Many of the decorated churches and chapels can still be seen and are in reasonably good condition although some were severely damaged during the period of iconoclasm (726 – 843 CE) and, unfortunately, in more recent times by tourists. 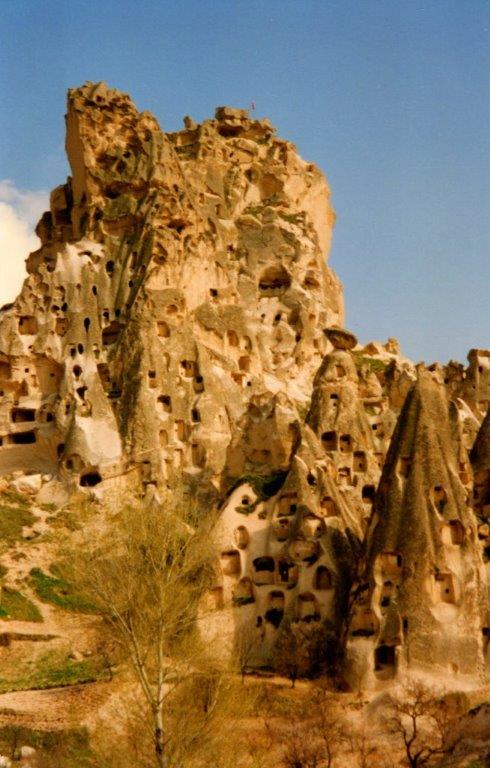 Exploring various areas in Cappadocia, such as Ürgüp, Nevşehir, El Nazar, Helvedere and Ilhara discloses dazzling sights but Gӧreme is outstanding because it is surrounded by fairy chimneys and by hollowed-out rock-formations in which people lived.

Photographs by George Repin in 1997. 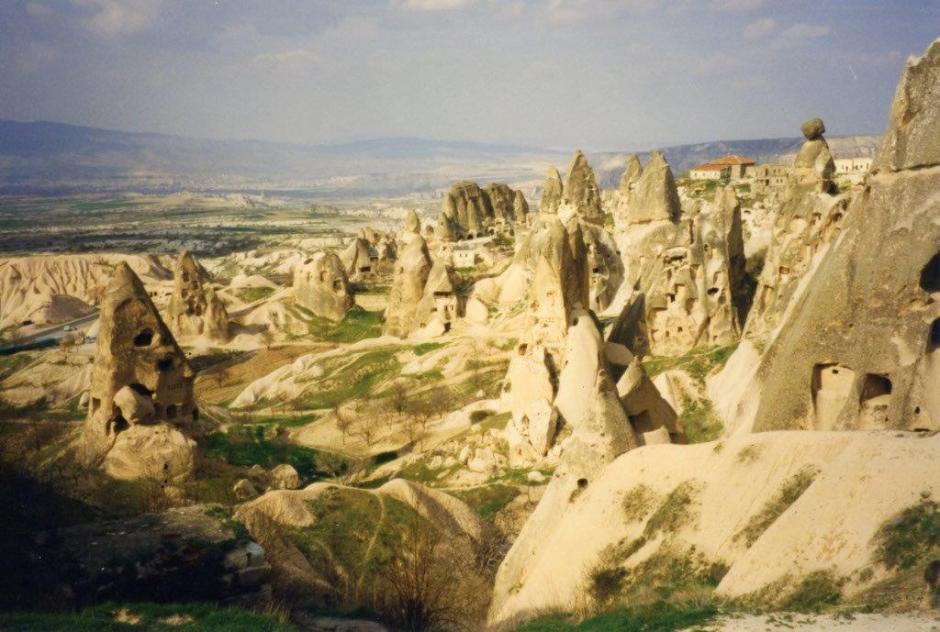 Windows in the rocks. 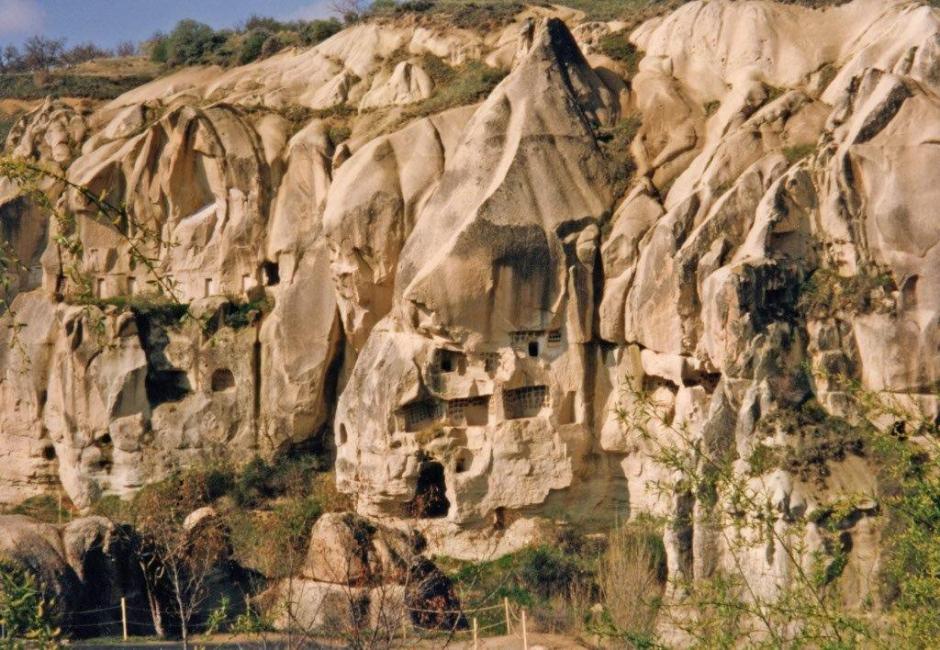 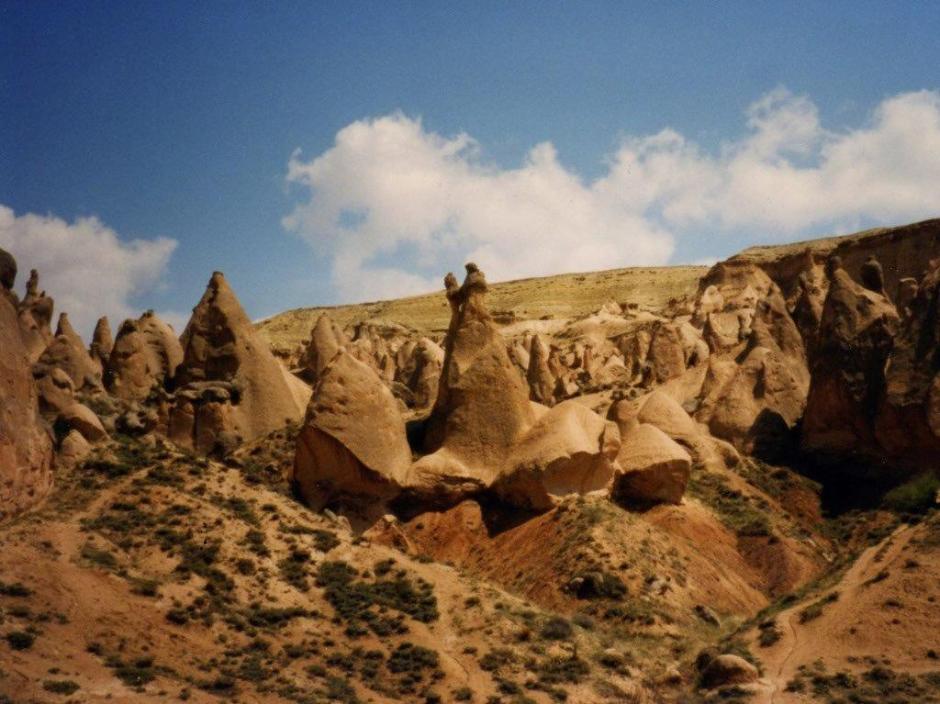 Another view of rock formations.

The Nineteen Thirties  Remembering Rowe Street  The Sydney Push  Saturday Night at the Movies  Shooting Through Like A Bondi Tram  A Stop On The Road To Canberra  City Department Stores - Gone and Mostly Forgotten  An Australian Icon - thanks to Billy Hughes  Crossing The Pacific in the 1930s  Hill End  The Paragon at Katoomba  Seafood In Sydney  How Far From Sydney?  Cockatoo Island Over The Years  The Seagull at the Melbourne Festival in 1991  Busby's Bore  The Trocadero In Sydney  Cahill's restaurants  Medical Pioneers in Australian Wine Making  Pedal Power and the Royal Flying Doctor Service  Pambula and the Charles Darwin Connection  Gloucester and the Barrington Tops  A Millenium Apart  Have You Stopped to Look?  Gulgong  Il Porcellino Olympia  Durham Hall  Sargent's Tea Rooms Pie Shops and Street Photographers The Ballet Russes and Their Friends in Australia  Hotels at Bondi  Alma Ata Conference - 1978 Keukenhof - 1954 The Lands Department Building and Yellowblock Sandstone  The Goroka Show - 1958  A Gem On The Quay  Staffa  The Matson Line and Keepsake Menus Kokeshi Dolls  The Coal Mine At Balmain  The Hyde Park Barracks  The Changing Faces Of Sydney From Pounds and Pence to Dollars and Cents Nell Tritton and Alexander Kerensky  Making A Difference In Ethiopia William Balmain  J C Bendrodt and Princes Restaurant Azzalin Orlando Romano and Romano's Restaurant Waldheim  Alcohol in Restaurants Before 1955  King Island Kelp  The Mercury Theatre  Around Angkor - 1963  Angkor Wat 1963  Costumes From the Ballets Russe Clifton at Kirribilli  Chairman Mao's Personal Physician  The Toby Tavern The MoKa at Kings Cross The Oceaographic  Museum in Monaco  The Island of Elba Russian Fairy Tale Plates Meteora Souda Bay War Cemetery Barrow, Alaska Cloisonné Tripitaka Koreana Minshuku The Third Man Photographs and Memories Not A Chagall! Did You Listen? Did You Ask?Napier (Ahuriri, Maori) New Zealand Borobudur  Ggantija Temples Plumes and Pearlshells Murano  University of Padua Ancient Puebloe Peoples - The Anasazi  Pula  The Gondolas of Venice Cinque Terre  Visiting the Iban David The Living Desert Bryce Canyon National Park  Aphrodisias  The Divine Comedy Caodaism  Sapa and local Hill People  A Few Children