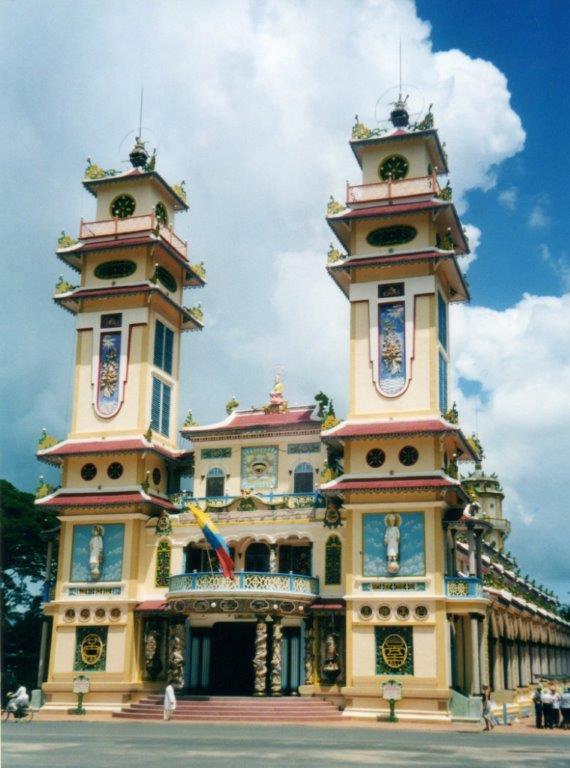 Caodaism is a religion, originating in Vietnam, which was officially established in 1926 in the city of Tay Ninh. Tay Ninh is 90 Kms north-west of Saigon (now Ho Chi Minh City). The Caodai Great Temple, the “Holy See” and accordingly the centre of the religion, is in Tay Ninh.

Caodaism is a syncretistic monotheistic religion which combines elements of many world religions including Buddhism, Taoism, Confucianism, Hinduism, Judaism, Islam and Christianity – and also traditional religious beliefs indigenous to Vietnam. It is the outcome of an attempt to create an “ideal” religion through the fusion of the secular and religious philosophies of East and West.

Cao Dai in Vietnamese means, literally “high tower or palace” but apparently is regarded in the religion to mean “the Highest Lord” or “Highest Power” and is a euphemism for God.

(It should be stressed that some of what appears in this article may be disputed in some quarters.) 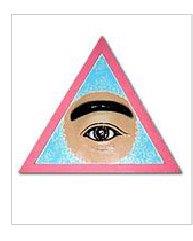 The symbol of the faith is the Left Eye of God – representing the yang masculine, ordaining, positive and expansive activity of the Lord.

Right: The Left Eye of God - symbol of the faith

Adherents to Caodaism engage in ethical practices such as prayer, veneration of ancestors, non-violence and vegetarianism with the goal of union with God and freedom from samsara. (In Sanskrit samsara simply means “wandering” and underlies the Buddhist concept of reincarnation and rebirth with the ultimate aim of achieving the cessation of suffering or nirvana and accordingly cessation of samsara).

The doctrines of the Cao Dai faith tend not only to reconcile all religious views but also to adapt to all degrees of spiritual evolution. A basic principle of Caodaism is “All Religions are One”.

Believers follow a number of rituals including four daily ceremonies at 6.00 am, noon, 6.00 pm and midnight.

With the establishment of the Vietnamese state the practice of Caodaism was proscribed but in 1997 it was granted legal recognition and Caodaists were again free to practise.

The number of adherents in Vietnam is about 3.2 million affiliated with the Tay Ninh church and up to 4 to 6 million in total if other branches are added. It is the third largest religion in Vietnam after Buddhism and Roman Catholicism. There are an estimated 30,000 adherents – primarily ethnic Vietnamese - in the United States of America, Europe and Australia.

As well as being a major centre of pilgrimage the Cao Dai Great Temple in Tay Ninh is one of Vietnam’s major tourist attractions.

Photographs by George Repin in 2002 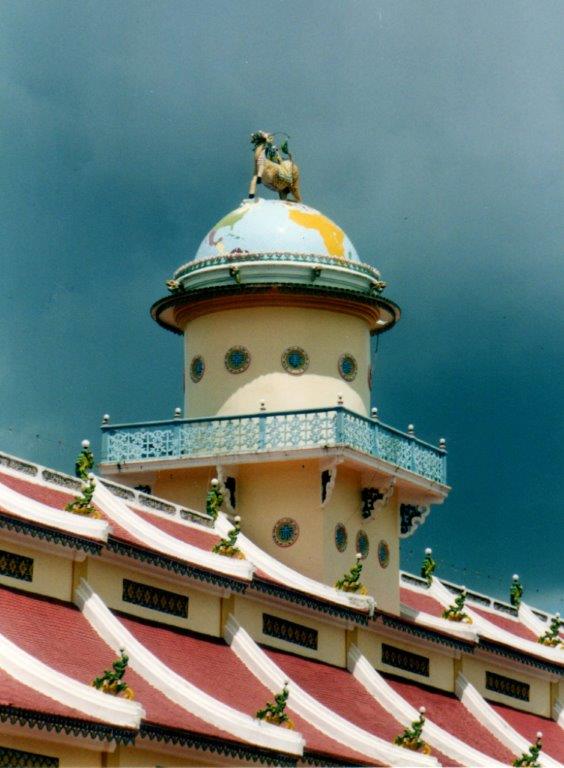 Mosque-like superstructure on the roof of the Caodai Great Temple 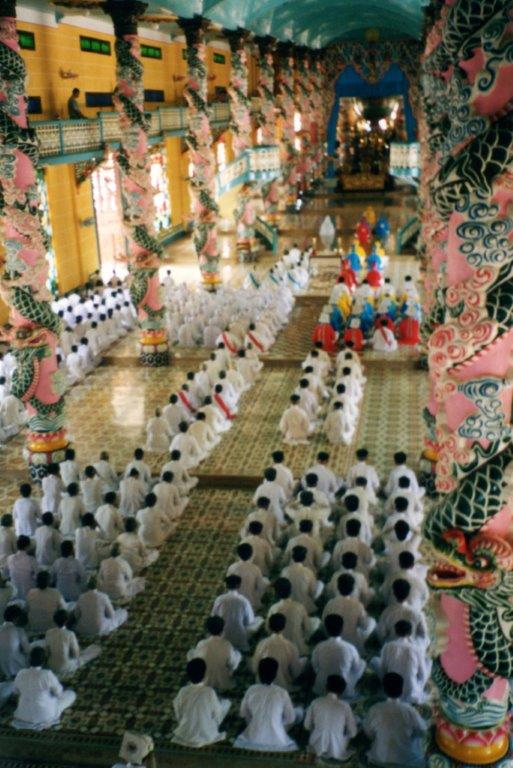 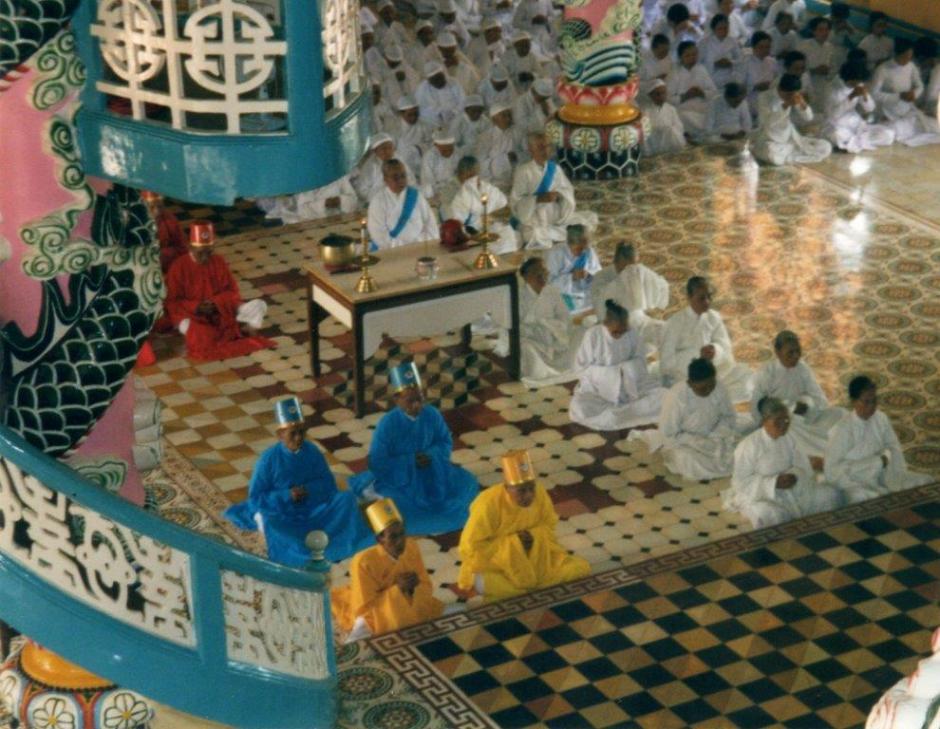 The Nineteen Thirties  Remembering Rowe Street  The Sydney Push  Saturday Night at the Movies  Shooting Through Like A Bondi Tram  A Stop On The Road To Canberra  City Department Stores - Gone and Mostly Forgotten  An Australian Icon - thanks to Billy Hughes  Crossing The Pacific in the 1930s  Hill End  The Paragon at Katoomba  Seafood In Sydney  How Far From Sydney?  Cockatoo Island Over The Years  The Seagull at the Melbourne Festival in 1991  Busby's Bore  The Trocadero In Sydney  Cahill's restaurants  Medical Pioneers in Australian Wine Making  Pedal Power and the Royal Flying Doctor Service  Pambula and the Charles Darwin Connection  Gloucester and the Barrington Tops  A Millenium Apart  Have You Stopped to Look?  Gulgong  Il Porcellino Olympia  Durham Hall  Sargent's Tea Rooms Pie Shops and Street Photographers The Ballet Russes and Their Friends in Australia  Hotels at Bondi  Alma Ata Conference - 1978 Keukenhof - 1954 The Lands Department Building and Yellowblock Sandstone  The Goroka Show - 1958  A Gem On The Quay  Staffa  The Matson Line and Keepsake Menus Kokeshi Dolls  The Coal Mine At Balmain  The Hyde Park Barracks  The Changing Faces Of Sydney From Pounds and Pence to Dollars and Cents Nell Tritton and Alexander Kerensky  Making A Difference In Ethiopia William Balmain  J C Bendrodt and Princes Restaurant Azzalin Orlando Romano and Romano's Restaurant  Waldheim  Alcohol in Restaurants Before 1955  King Island Kelp  The Mercury Theatre  Around Angkor - 1963  Angkor Wat 1963  Costumes From the Ballets Russe Clifton at Kirribilli  Chairman Mao's Personal Physician  The Toby Tavern The MoKa at Kings Cross The Oceaographic  Museum in Monaco  The Island of Elba Russian Fairy Tale Plates Meteora Souda Bay War Cemetery Barrow, Alaska Cloisonné Tripitaka Koreana Minshuku The Third Man Photographs and Memories Not A Chagall! Did You Listen? Did You Ask?Napier (Ahuriri, Maori) New Zealand Borobudur  Ggantija Temples Plumes and Pearlshells Murano  University of Padua Ancient Puebloe Peoples - The Anasazi  Pula  The Gondolas of Venice Cinque Terre  Visiting the Iban David The Living Desert Bryce Canyon National Park  Aphrodisias  The Divine Comedy