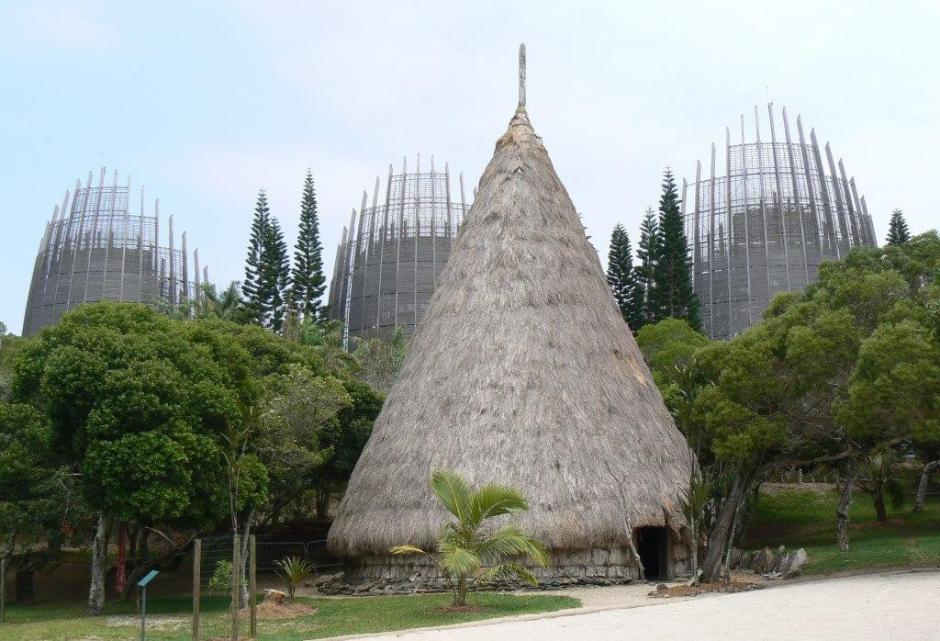 Contrast of a Kanak Great House against the background of three "cases ".

Situated about 8 kilometres northeast of Noumea, the capital city of the French special collectivity of New Caledonia, the Jean-Marie Tjibaou Cultural Centre celebrates Kanak culture, the indigenous culture of New Caledonia. It is named in honour of Jean-Marie Tjibaou a leader of the Kanak independence movement and a politician who had the vision of establishing a centre to promote indigenous Kanak culture, where the linguistic and artistic heritage of the Kanak people could be preserved and blended.  In the 1970s he undertook a thesis in ethnology at the Sorbonne and although he did not complete his studies in Paris he became deeply engaged in cultural and ethnicity issues on his return to New Caledonia.

When the Matignon agreements between the representatives of France and New Caledonia were signed on 26 June, 1988 Tjibaou, then the leader of the Kanak independence movement, proposed that an Agency should be established for the development of Kanak Culture with the objective of promoting Kanak linguistic and archaeological heritage, promote Kanak handicrafts and arts and conduct research activities.

Following his assassination on 4 May, 1989 his proposal was implemented. The President of France ordered that a cultural centre, as advocated by Tjibaou, be set up in Noumea.  Following a design competition the work was awarded to the Italian architect, Renzo Piano, and the Centre constructed between 1993 and 1998.

The exteriors of the so-called cases or hut pavilions, which are of different sizes, have an ancient appearance while the interiors have rectangular space for permanent and temporary exhibitions, administrative offices and studios. 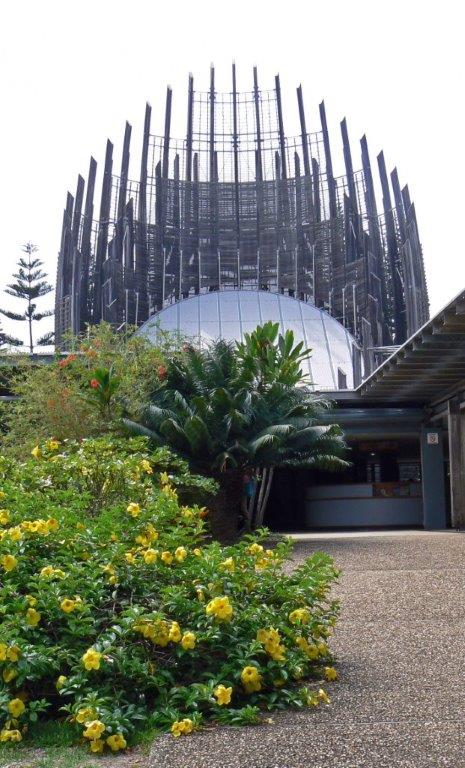 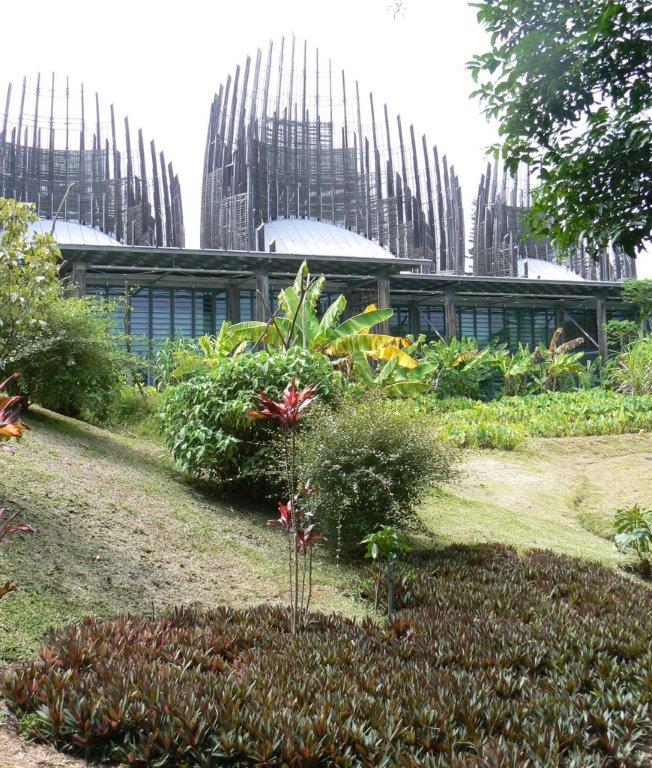 Administration buildings with "cases" behind

The entire complex is built along a ridge on the narrow Tinu Peninsula, with ten cases arranged in three groups or village clusters with one tall hut in each cluster representing the Great Hut of the Kanak Chiefs. The complex is surrounded by a planted indigenous landscape including tall transplanted Norfolk Island pines.  Visitors wandering along the paths connecting the cases walk past examples of Kanak carvings and sculpture along the way. 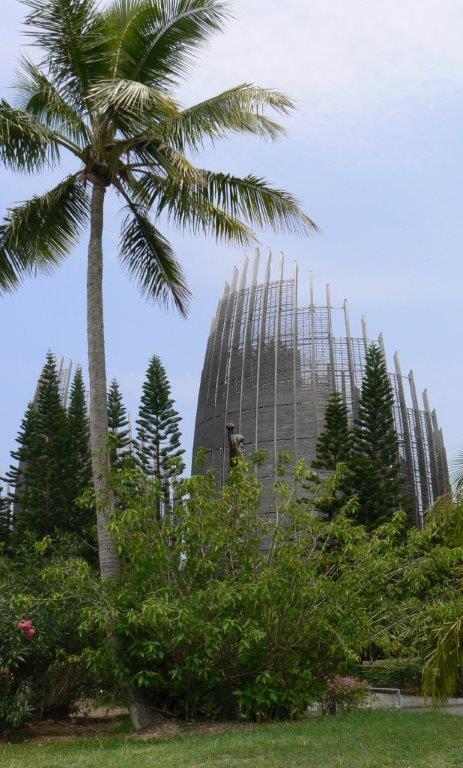 Distant view of a "case" in the indigenous landscape setting 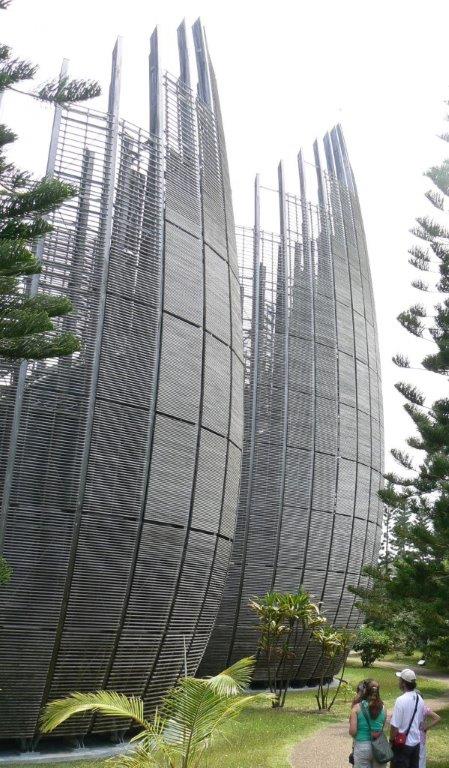 Close up view of a "case" 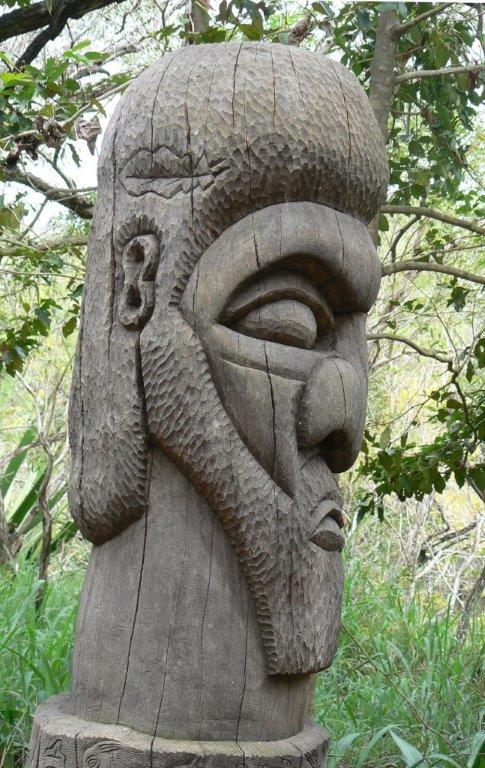 Traditional carving beside a path 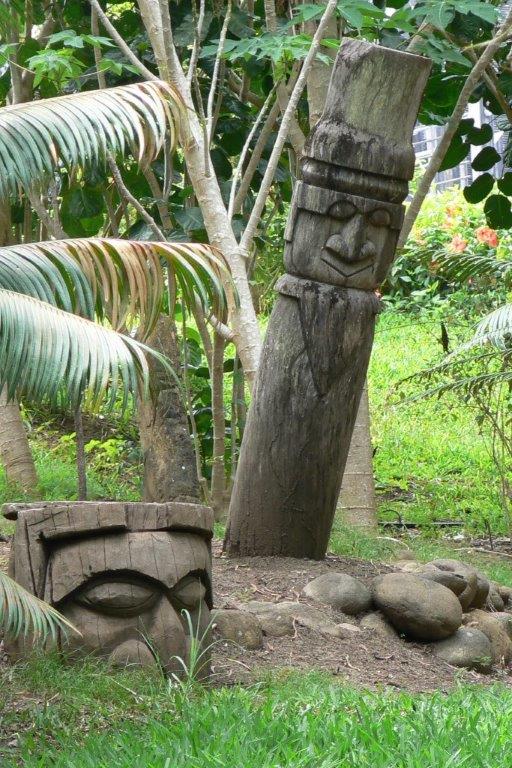 A pair of carvings 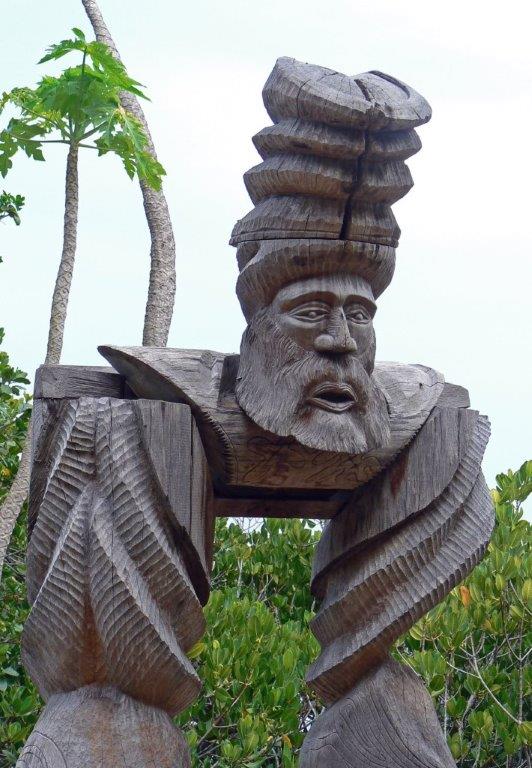 A wooden carving overlooking the path

Pictures by George Repin in January, 2010 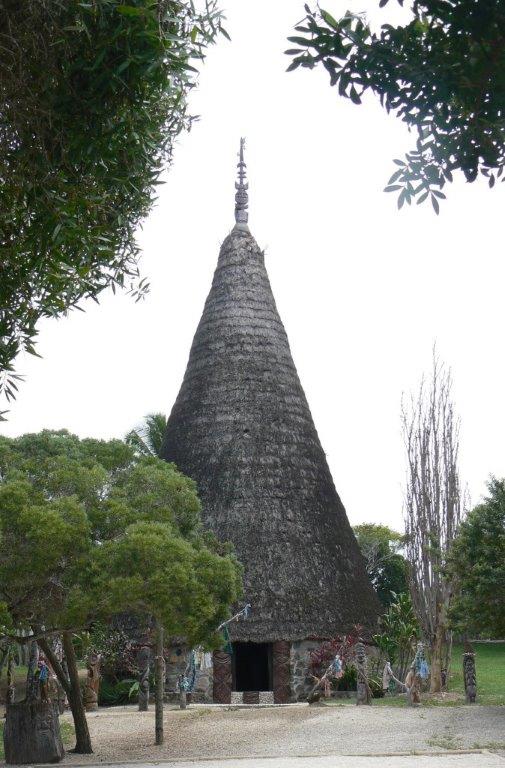 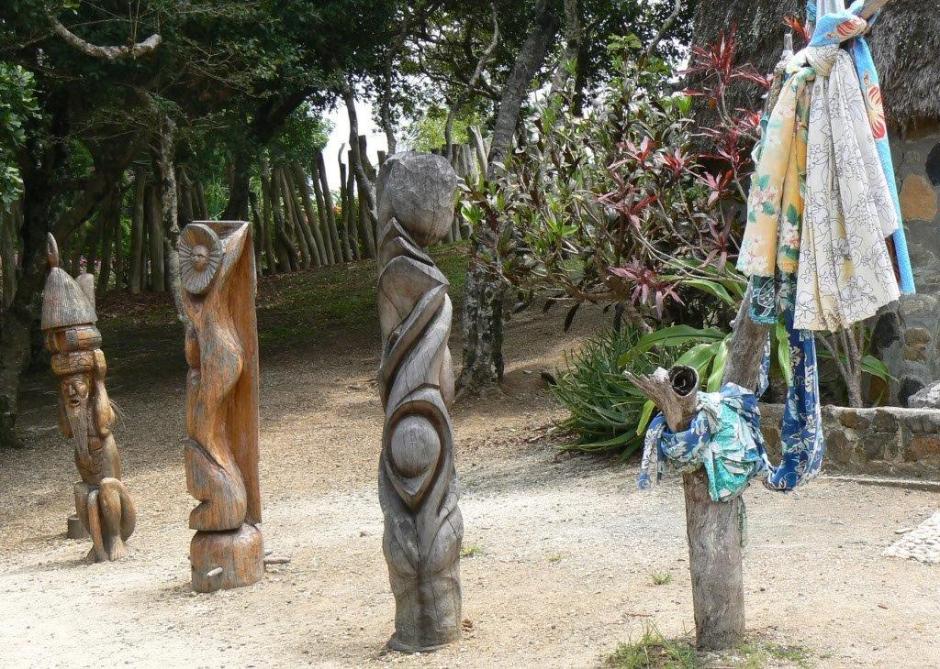 The Nineteen Thirties  Remembering Rowe Street  The Sydney Push  Saturday Night at the Movies  Shooting Through Like A Bondi Tram  A Stop On The Road To Canberra  City Department Stores - Gone and Mostly Forgotten  An Australian Icon - thanks to Billy Hughes  Crossing The Pacific in the 1930s  Hill End  The Paragon at Katoomba  Seafood In Sydney  How Far From Sydney?  Cockatoo Island Over The Years  The Seagull at the Melbourne Festival in 1991  Busby's Bore  The Trocadero In Sydney  Cahill's restaurants  Medical Pioneers in Australian Wine Making  Pedal Power and the Royal Flying Doctor Service  Pambula and the Charles Darwin Connection  Gloucester and the Barrington Tops  A Millenium Apart  Have You Stopped to Look?  Gulgong  Il Porcellino Olympia  Durham Hall  Sargent's Tea Rooms Pie Shops and Street Photographers The Ballet Russes and Their Friends in Australia  Hotels at Bondi  Alma Ata Conference - 1978 Keukenhof - 1954 The Lands Department Building and Yellowblock Sandstone  The Goroka Show - 1958  A Gem On The Quay  Staffa  The Matson Line and Keepsake Menus Kokeshi Dolls  The Coal Mine At Balmain  The Hyde Park Barracks  The Changing Faces Of Sydney From Pounds and Pence to Dollars and Cents Nell Tritton and Alexander Kerensky  Making A Difference In Ethiopia William Balmain  J C Bendrodt and Princes Restaurant Azzalin Orlando Romano and Romano's Restaurant Waldheim  Alcohol in Restaurants Before 1955  King Island Kelp  The Mercury Theatre  Around Angkor - 1963  Angkor Wat 1963  Costumes From the Ballets Russe Clifton at Kirribilli  Chairman Mao's Personal Physician  The Toby Tavern The MoKa at Kings Cross The Oceaographic  Museum in Monaco  The Island of Elba Russian Fairy Tale Plates Meteora Souda Bay War Cemetery Barrow, Alaska Cloisonné Tripitaka Koreana Minshuku The Third Man Photographs and Memories Not A Chagall! Did You Listen? Did You Ask?Napier (Ahuriri, Maori) New Zealand Borobudur  Ggantija Temples Plumes and Pearlshells Murano  University of Padua Ancient Puebloe Peoples - The Anasazi  Pula  The Gondolas of Venice Cinque Terre  Visiting the Iban David The Living Desert Bryce Canyon National Park  Aphrodisias  The Divine Comedy Caodaism  Sapa and local Hill People  A Few Children Cappadocia  Symi