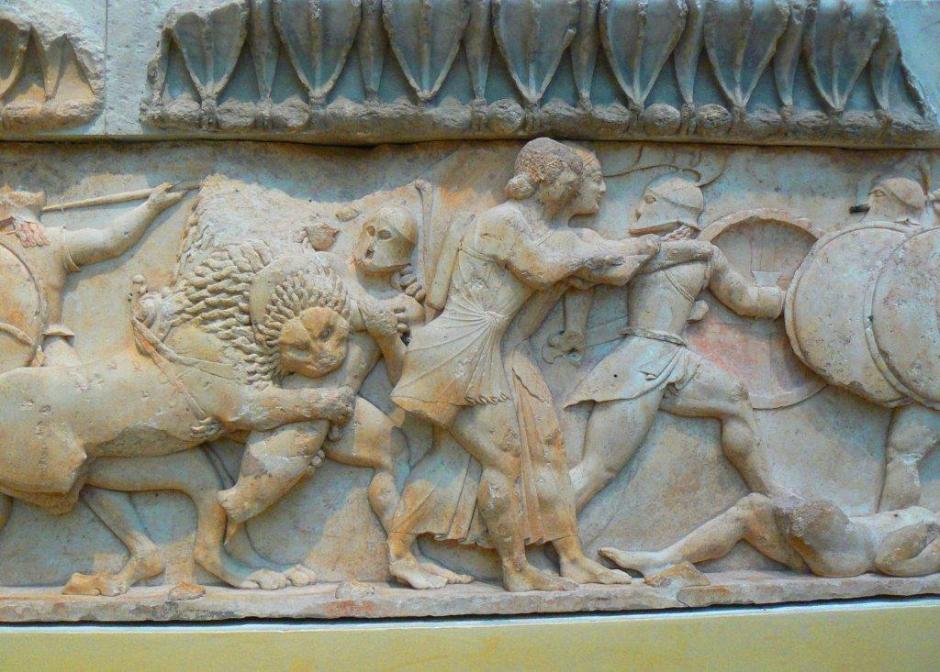 Part of the frieze from the Siphnian Treasury - Delphi Archaeological Museum.

Delphi, located in upper central Greece on multiple terraces along the south-western spur of Mount Parnassus, is the site of the Sanctuary of Apollo and where Apollo was believed to speak through Pythia the Delphic Oracle.  Early myths suggest that there was an important oracle at the site, in the pre-classical Greek world (as early as 1400 BCE), which was rededicated in 800 BCE as the major site for the worship of Apollo.  The ruins of the Temple of Apollo which can be seen today date from the 4th Century BCE, having been erected on the remains of an earlier temple (6th Century BCE), which itself was on a 7th Century BCE construction.

Delphi was designated a UNESCO World Heritage site in 1987.

Apollo was believed to speak through the Delphic Oracle, an older woman of blameless life, located in the Temple.  At the height of its prestige the Delphic Oracle exerted considerable influence throughout the Greek world and was consulted before all major undertakings. In addition to important matters of public policy the oracle could be consulted on personal affairs.  She also was respected by the Greek-influenced countries at the periphery of the Greek world, even as far as Egypt - and by early Romans.

The Oracle sat in a trance on a tripod over a cleft in the rock and “raved” in a form of ecstatic speech which required interpretation. The trance is believed to have been induced by chemical vapours, including the gas ethylene, coming from the cleft and possibly amplified by chewing oleander leaves.

The pronouncements were by no means immediately clear and often depended on the interpretation placed on them by the hearer.  One of three phrases carved into the temple was know thyself – almost a warning.  An example of the importance of an individual’s interpretation of what the Oracle said is provided by the example of Croesus the King of Lydia who, when faced with a war with Persia asked the Oracle’s advice. The Oracle told Croesus that if he went to war a great empire would fall.  Acting on his interpretation of the advice (that the Oracle meant the Persians) Croesus went to war.  The Lydians were routed at Sardis and it was the Lydian empire which fell. 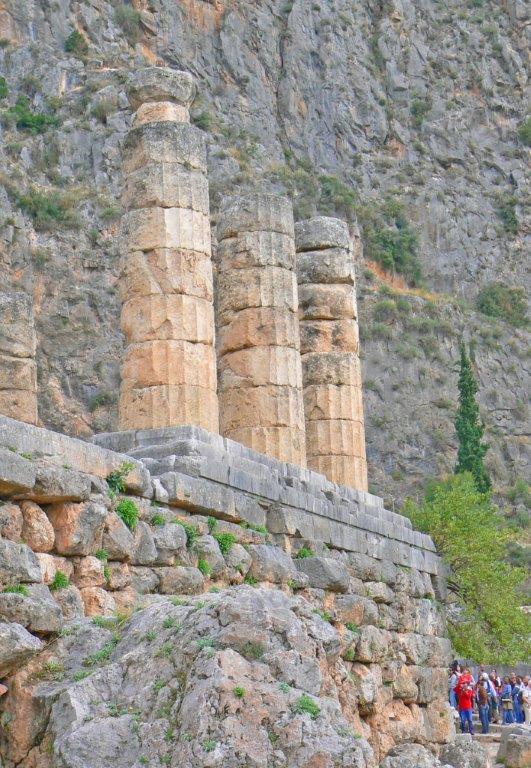 Supporting wall of the Temple of Apollo and restored columns

Over the years Delphi grew in magnificence as those who believed that they had benefited from the Oracle’s advice poured riches into the city in the form of buildings, hundreds of votive statues and other works of art - and into treasuries built by various Greek city states to commemorate victories and to thank the Oracle whose advice contributed to the victories.  They are called treasuries because they held the offerings made to Apollo. 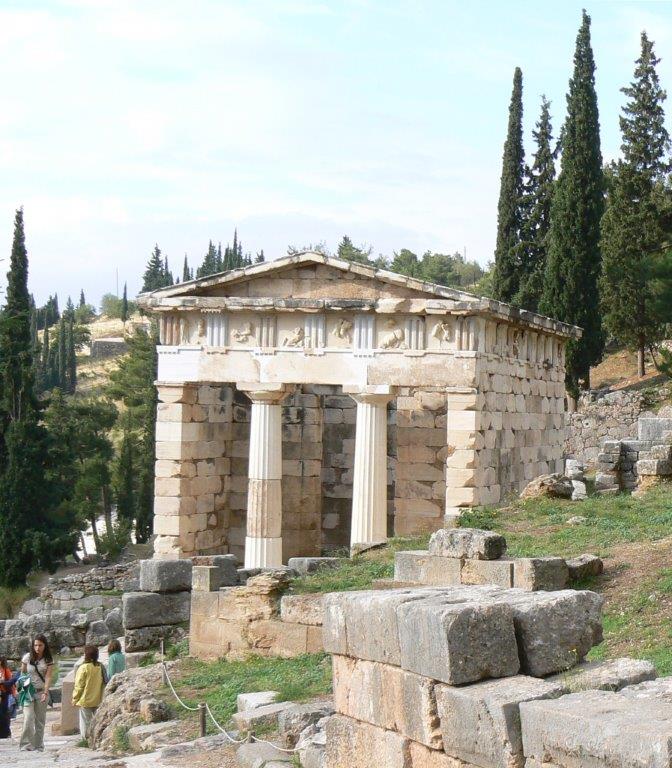 The Treasury of the Athenians 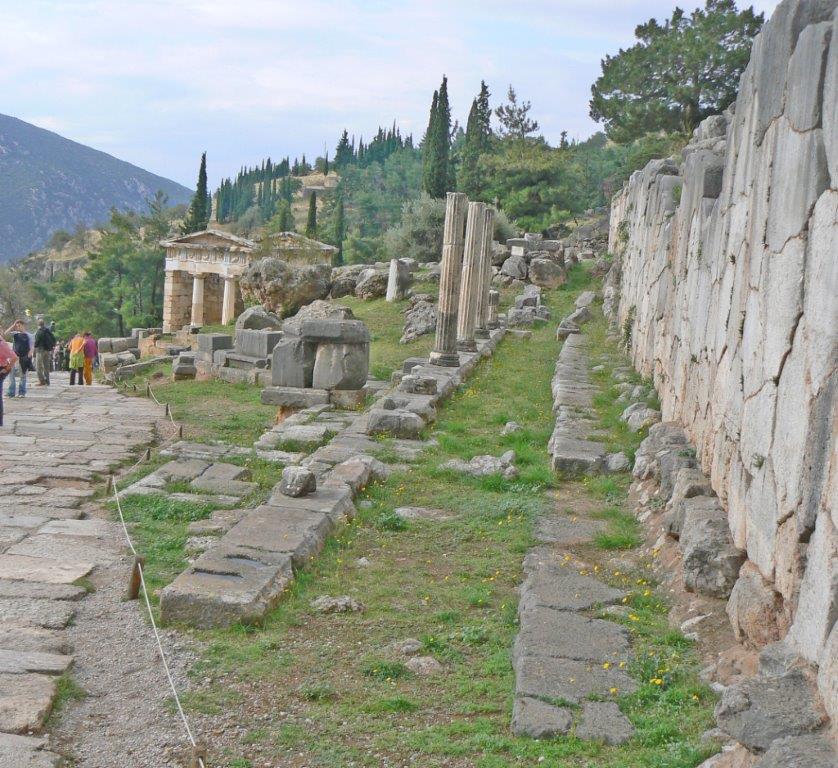 In the first century BCE the site suffered damage by marauding tribes and in an earthquake.

After the Romans captured Delphi in the early 2nd Century CE it was frequently pillaged. When Nero came to Greece in 66 CE he took away to Rome over 500 of the best statues. 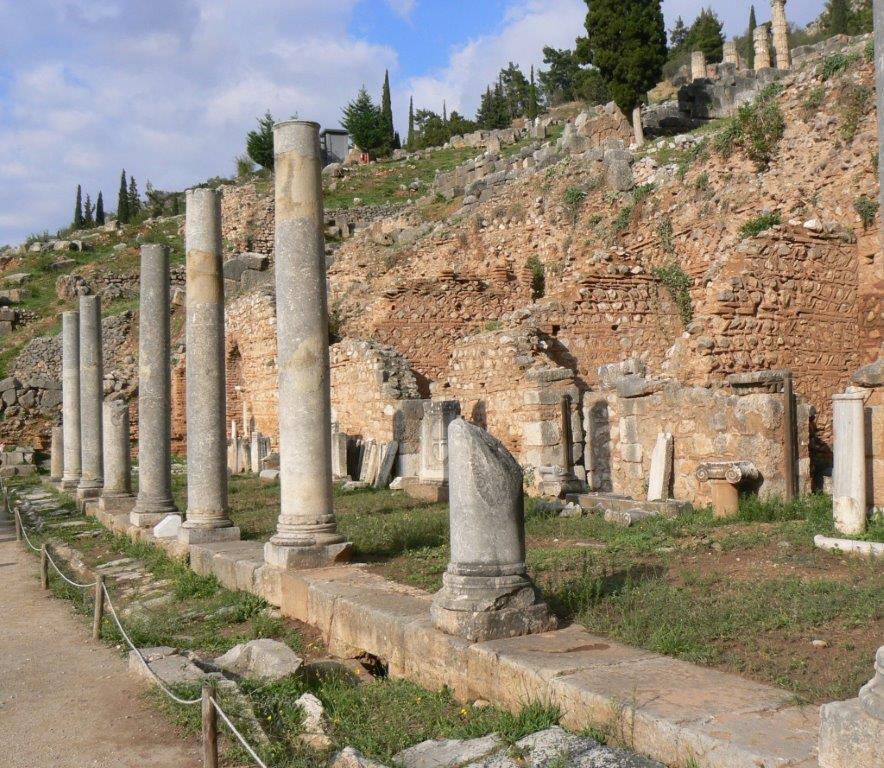 Columns behind which statues stood along the Sacred Way

Despite the rise of Christianity in the Roman Empire the Oracle and the temple survived until 390 CE when the Roman Emperor Theodosius I destroyed the temple and most of the remaining statues and works of art in the name of Christianity.  Zealous Christians subsequently completely destroyed the site in an attempt to remove all traces of paganism.  The site was abandoned in the 6th or 7th Centuries.

Over time the village of Kastri grew up over the site. In the latter part of the nineteenth century, when attempts were made to excavate the site the villagers resisted.  Ultimately, after an earthquake substantially damaged the village, the villagers agreed to move to a completely new village and excavations could begin in 1893.

An impressive collection of items associated with ancient Delphi is displayed in the Delphi Archaeological Museum at the foot of the Sanctuary site.

Photographs by George Repin on 13 October, 2006 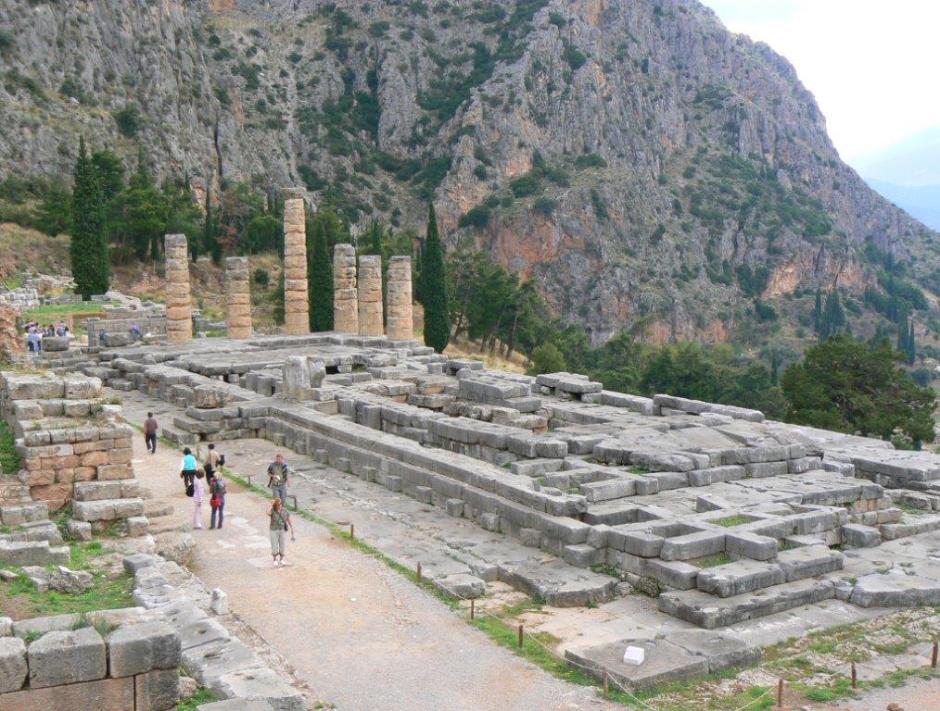 The Temple of Apollo. 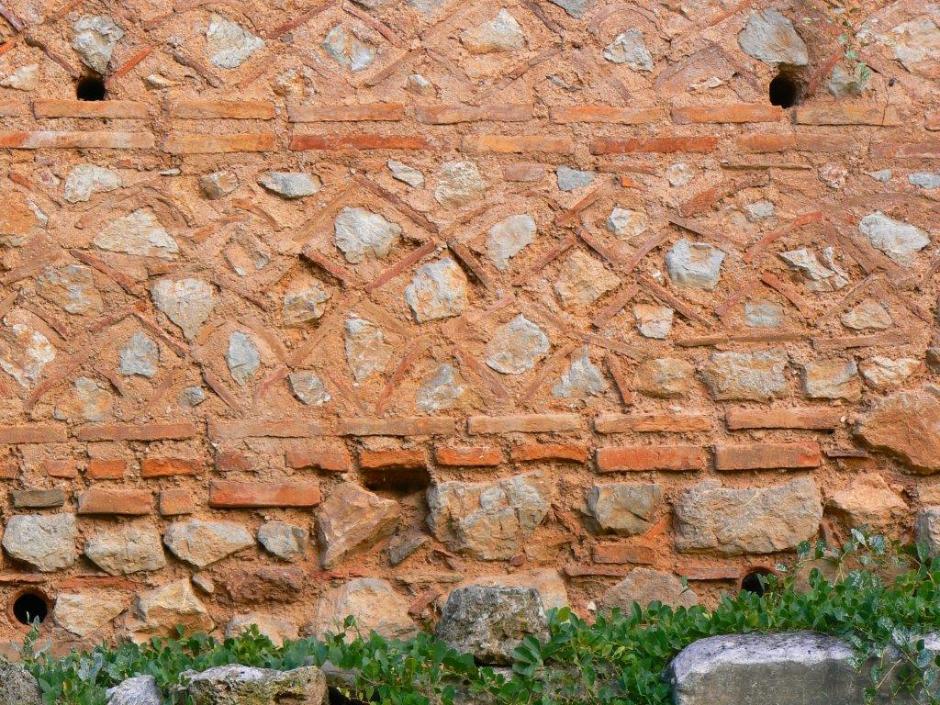 Detail of wall construction at start of the Sacred Way. 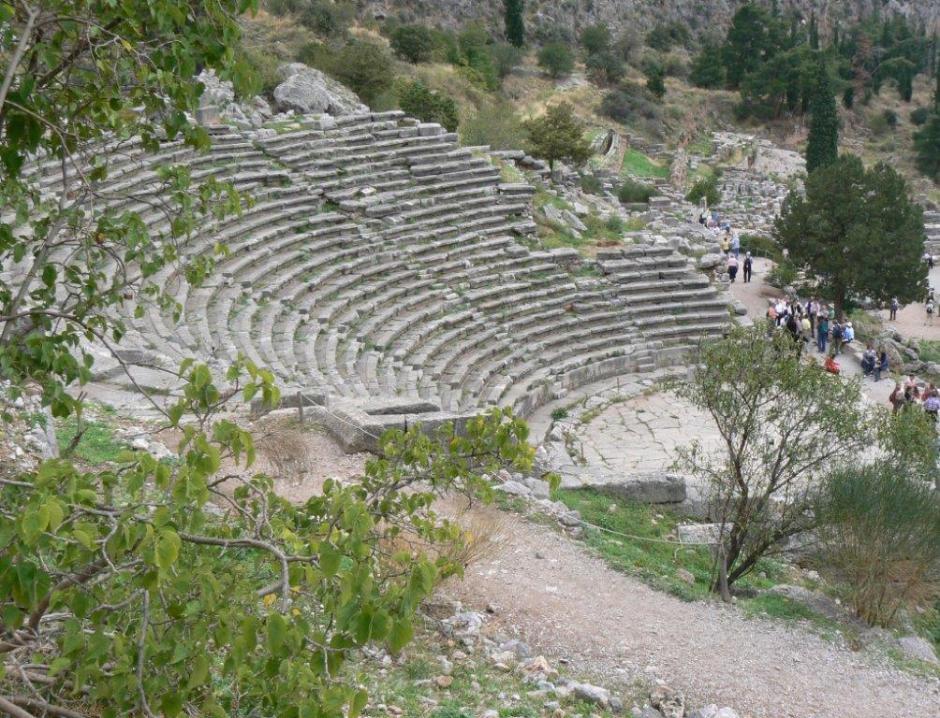 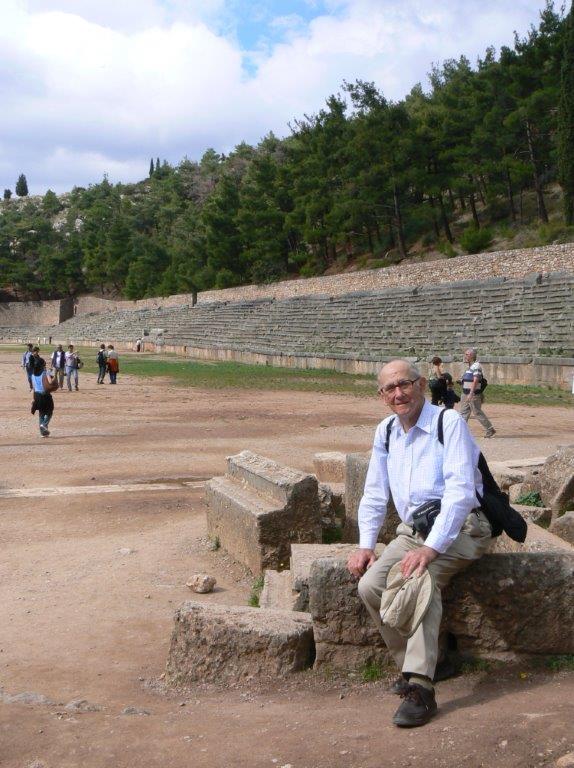 The Stadium. Built in the 5th Century BCE but altered in later years. 177 metres long and 25.5 metres wide.

Delphi Archaeological Museum - Some Displays from 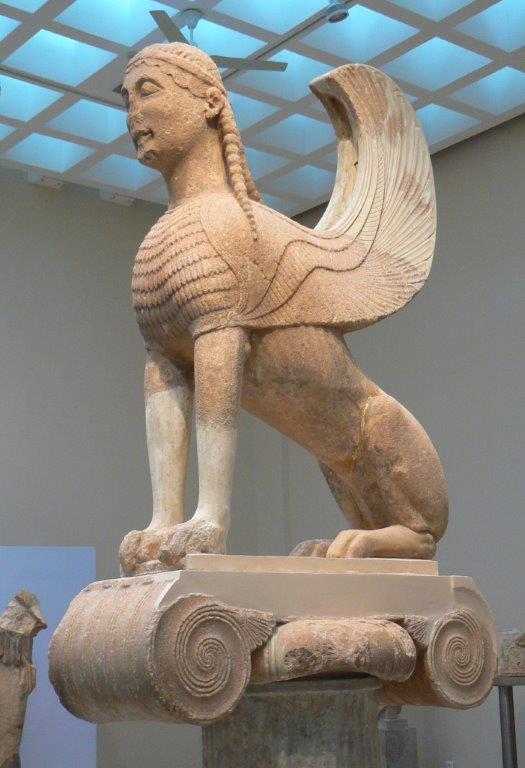 Sphinx - sent as an offering from the Island of Naxos - originally stood on a high Ionic column in front of the polygonal wall. 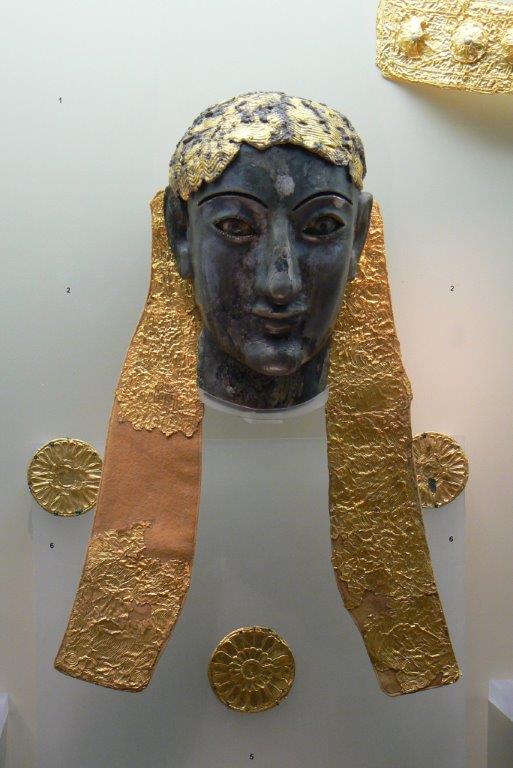 A cryselephantine (gold and ivory) object - possibly the head of a statue of Apollo - found under the Sacred Way. 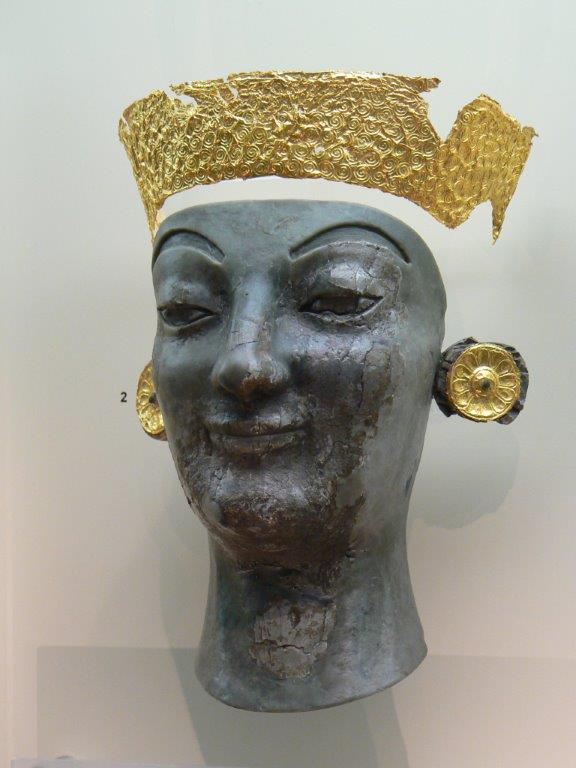 A cryselephantine object - possibly the head of a statue of Artemis - found under the Sacred Way. 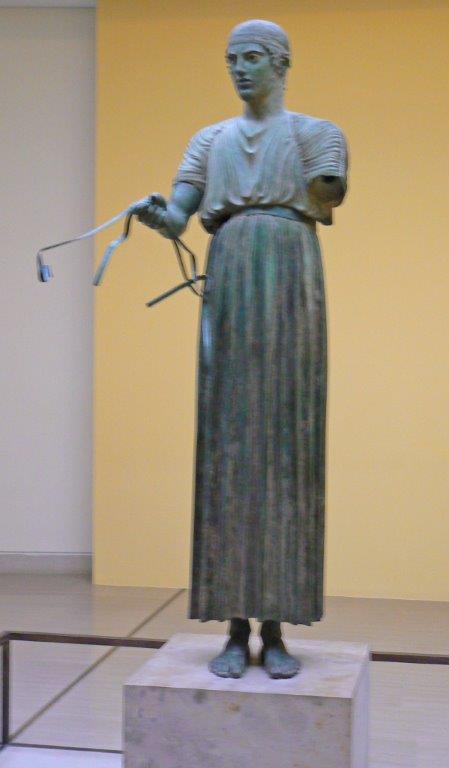 Bronze statue of a charioteer. (Sometimes referred to as "The Charioteer of Delphi"). 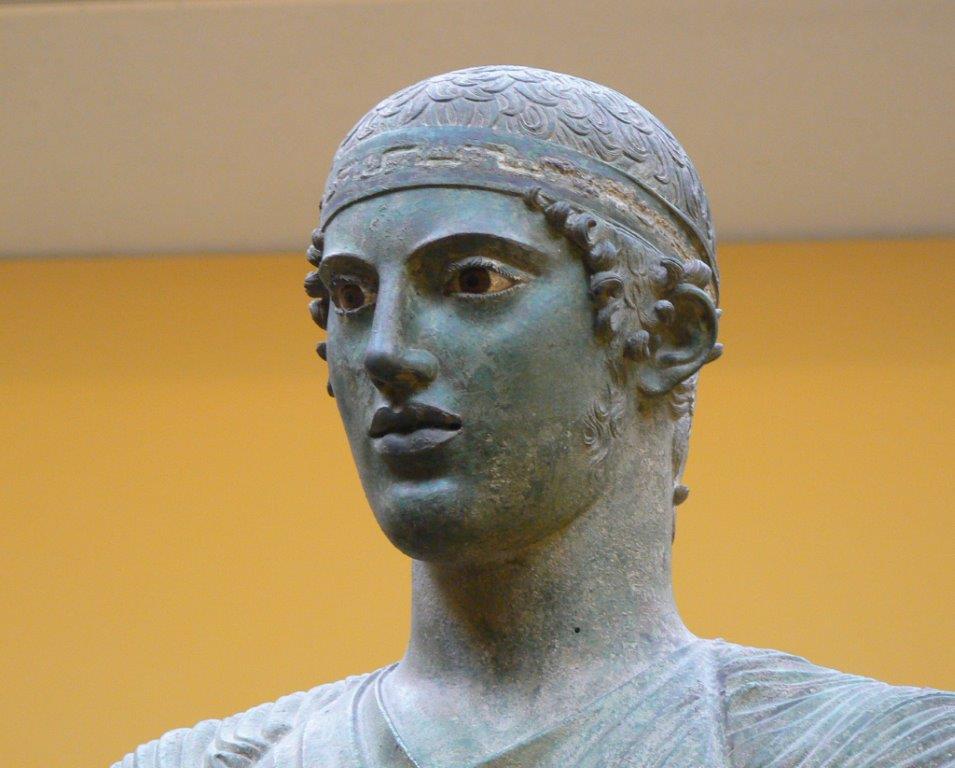 Head of the bronze statue of a charioteer.