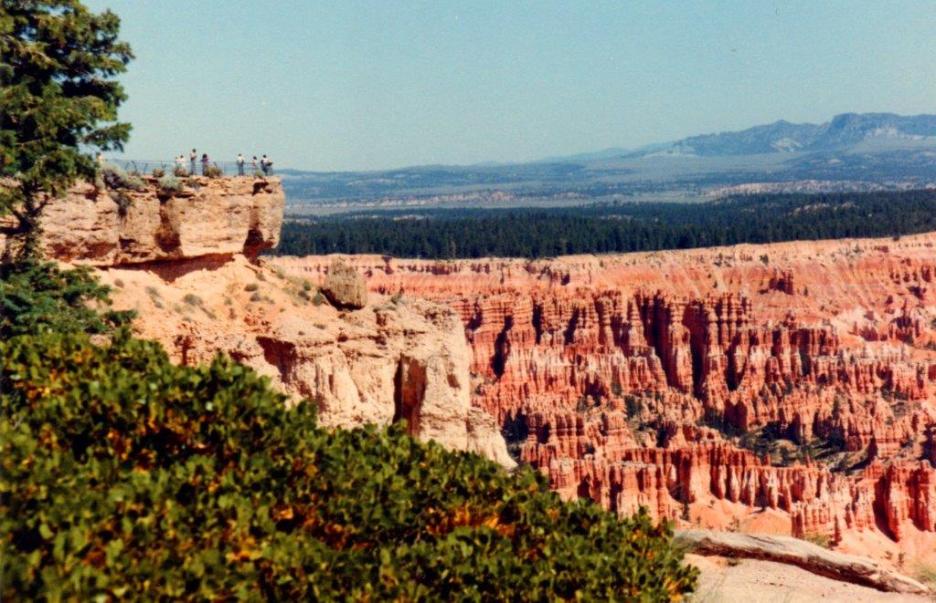 South-western Utah of the United States of America, in which the Bryce Canyon National Park is located, is a harsh rugged land of barren rocks, high plateaus, plunging canyons and “skyrocketing” cliffs. The area is a vast erosional remnant - the mesas and plateaus have been formed by the erosion of a former higher plain. 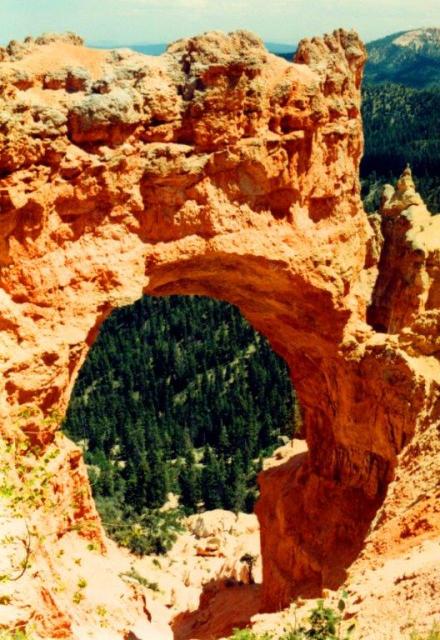 Two national parks in the area, although only 50 miles apart are very different. The main scenic area of Zion National Park is in a deep, majestic canyon the sheer walls of which have been cut through petrified desert.  In contrast, despite its name, the Bryce Canyon National Park is not a canyon as it was not formed by erosion initiated from a central stream (the technical definition of a canyon).  Instead, headward erosionhas excavated a series of horse-shoe shaped amphitheatre-like features from the eastern edge of the Pausaugunt Plateau.  (Headward erosionoccurs when sheets of water flow over the edge of a rock formation).

The water stream erosion and frost weathering have exposed delicate and colourful pinnacles called hoodoos up to 200 feet high. In contrast to Zion the tourist access to Bryce is on the plateau, 7000 feet above sea level and 1000 feet above Zion.

Right: The "Bryce Natural Bridge" with Ponderosa Pines in Ponderosa Canyon below.

Bryce Canyon National Park although small – only 56.2 square miles in area – is uniquely beautiful, is delicate and cheerfully brilliant. Zion is massive, awesomely sombre and has subtle splendour.

The colour of the rocks in both national parks result from iron, in the form of oxides. Depending on the concentration, iron can colour rocks black, brown, red, pink, yellow or any shade in between.  Manganese added will produce purple and copper will produce green.

“Immediately east and south of the last corner set the surface breaks off almost perpendicularly to a depth of several hundred feet – seeming indeed as though the bottom had dropped out and left rocks standing in all shapes and forms as long sentinels over the grotesque and picturesque scenes. There are thousands of red, white, purple and vermilion rocks, of all sizes, resembling sentinels on the walls of castles, monks and priests in their robes, attendants, cathedrals and congregations. There are deep caverns and rooms resembling ruins of prisons, castles, churches with their guarded walls, battlements, spires, and steeples, niches and recesses, presenting the wildest and most wonderful scene that the eyes of man ever beheld, in fact, it is one of the wonders of the world.”

Standing at Sunset Point today it is easy to relate to the wonderment felt by T. C. Bailey when for the first time he came upon the magnificent vista which he described so accurately and so movingly.

Photographs by George Repin in 1982 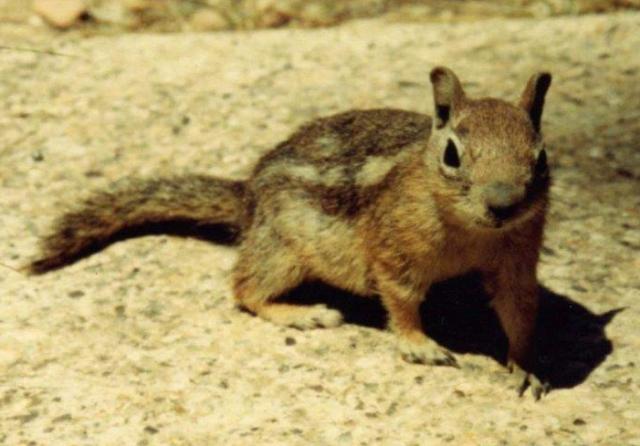 Chipmonk - these are ubiquitous in the national parks of SW Utah. 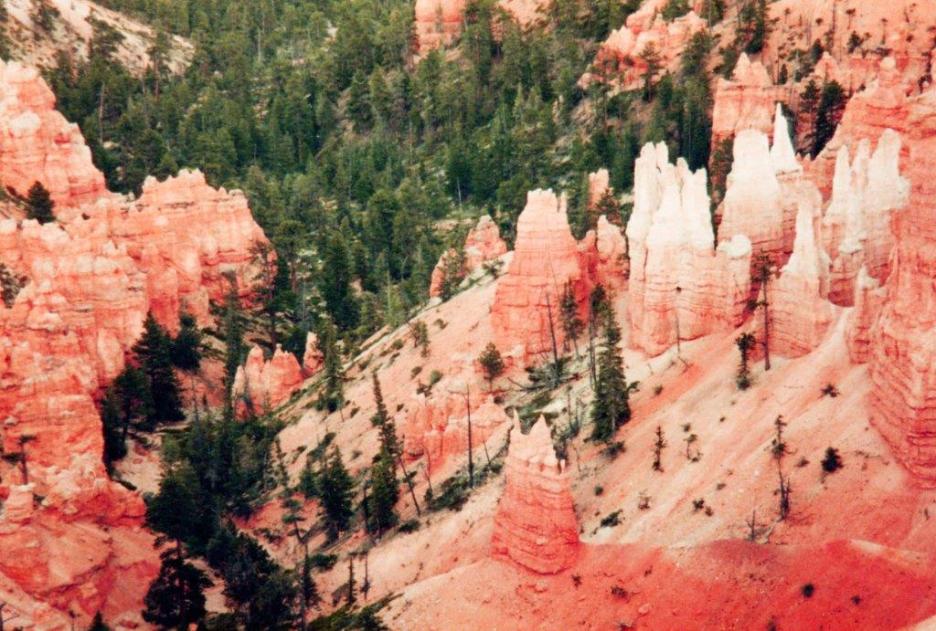 "Hoodoos" with Ponderosa Pines in the valley. 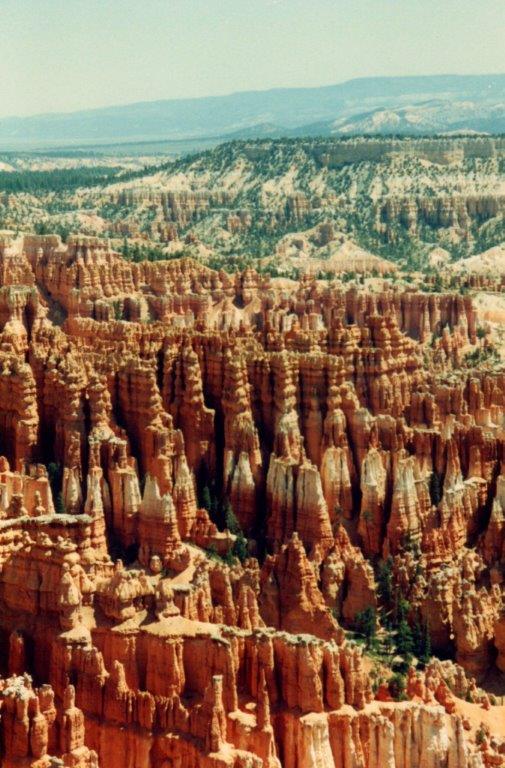 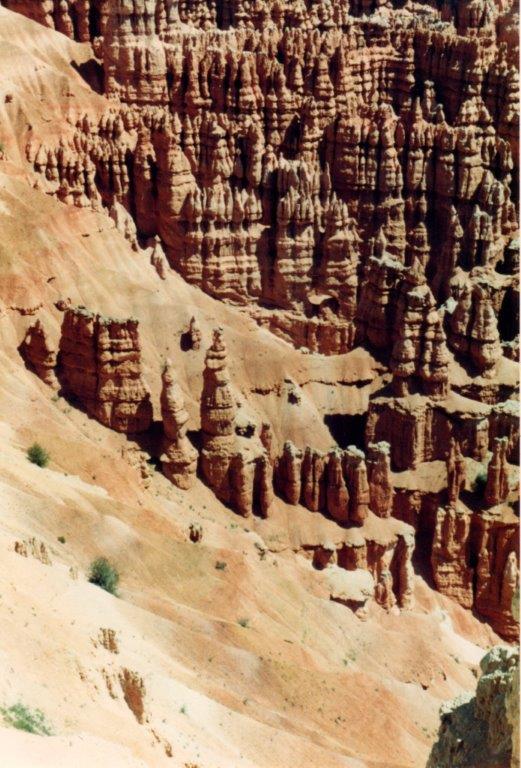 The "Queen's Garden" seen from the rim trail near Sunset Point. 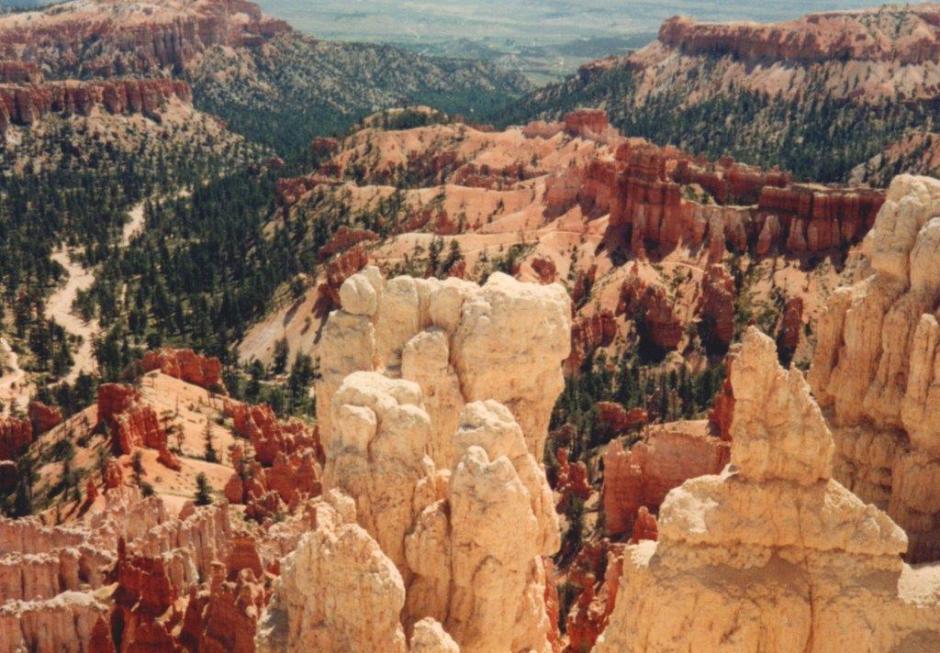 "Hoodoos" with valley in the distance.