THE GONDOLAS OF VENICE 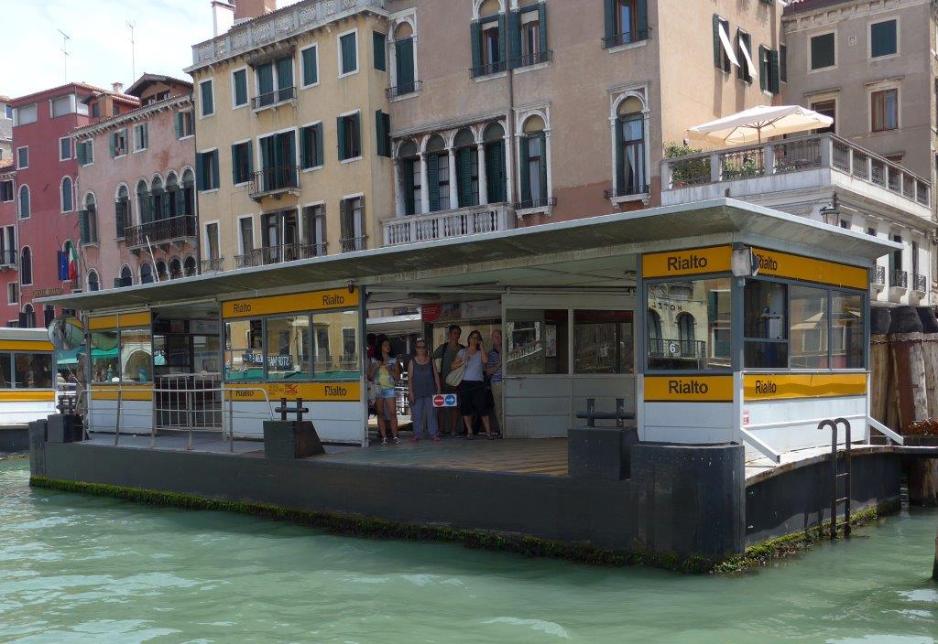 Waterbus stand at the Rialto Bridge.

THE GONDOLAS OF VENICE

When, on an evening in 1954, my wife and I arrived by train in Venice we were carried, with our luggage, from in front of the station (Ferrovia) to our hotel on the Riva degli Schiavoni in a gondola. After leaving the Grand Canal it became a magical experience with just the ripple of the gondolier’s oar in the water, gliding along the narrow canals and under the bridges with glimpses through the passing windows into the life of the Venetians. This doesn’t happen now. Transport from the station is by water taxi, or visitors with their bags can board a waterbus at one of the landing stages at the station - different ones for different lines – depending on where they have to go. 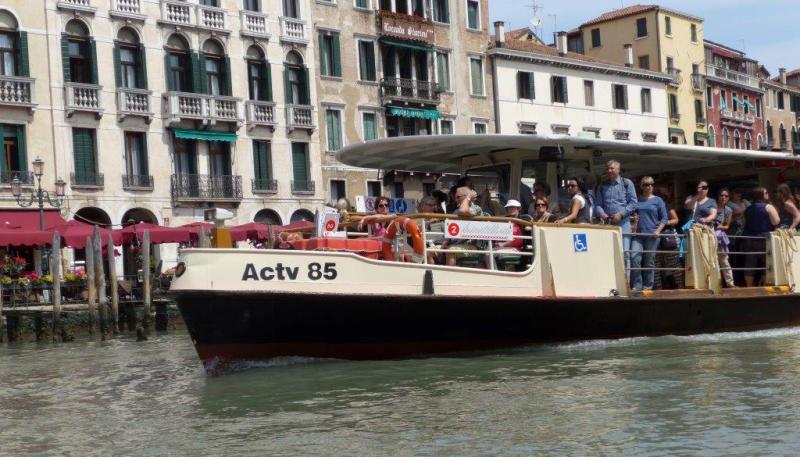 For centuries gondolas were the chief form of public transport for Venetians but this is no longer so. While they still serve to carry people across the Grand Canal and are important contributors to the spectacle and glamour of Venetian festivals (such as the  Carnevale), regattas and weddings – and sometimes funerals – their main activity is to provide tourists with the experience of riding in a gondola. Tourists have the choice of a number of set routes with a set time and a fixed price. They queue to pay, queue to board and are guided into a gondola which is sent off and immediately followed by another. 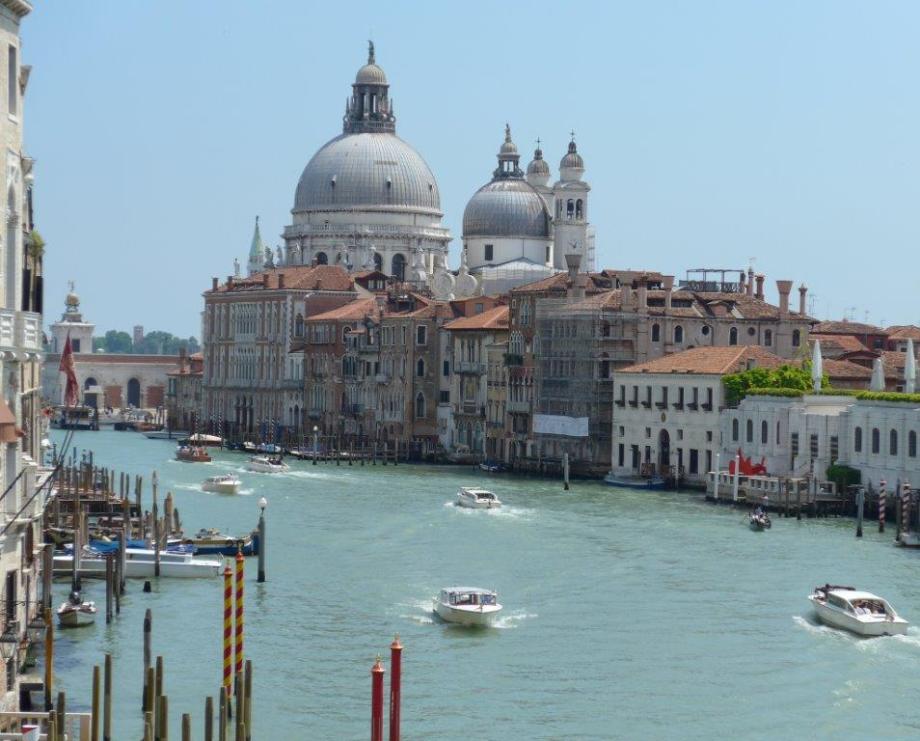 Launches on the Grand Canal - Santa Maria della Salute in the distance.

The number of these craft, which are the well-publicised “icons” of Venice, is estimated to have been anywhere between eight and ten thousand in the 17th and 18th centuries. Today there are only about four hundred.

However, gondolas are not the only craft on the canals of Venice, a city completely dependent on water transport for the goods it needs to function. Barges and the vessels pulling them, and launches of various types and sizes abound. 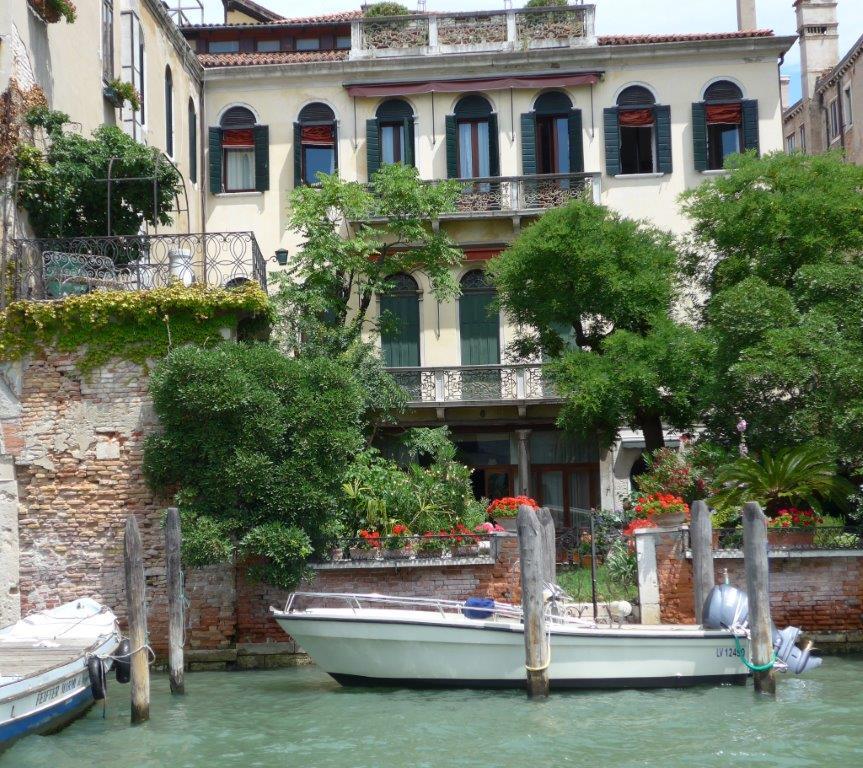 A launch berthed by a private garden on the Grand Canal.

The design of gondolas has changed over the years. The banana-shaped modern gondola was developed in the 19th Century and evolved until the mid-20th Century when the city government prohibited any further modifications. By law all gondolas now are painted black.

Gondolas are handmade and are composed of 280 pieces using eight different woods. The port side is longer than the starboard side providing asymmetry to resist the tendency to turn left at the forward stroke of the gondolier as he propels it first with a forward stroke followed by a backward stroke. The gondolier stands at the stern of the gondola facing the bow, using the oar, which is made of birchwood, in a distinctive way. For the gondola to be poled like a punt would be quite impractical because of the depth of the canals. As can be imagined with a craft of such a long history associated with Venice every detail of the gondola has an interesting symbolism, which is well worth reading about.

To be a gondolier requires a period of training and apprenticeship followed by a comprehensive examination. The practical skills of a gondolier also are tested. He must demonstrate the ability to safely propel a gondola through the tight spaces of Venetian canals. The number of licences issued is limited to 425.

Photographs by George Repin in May and June, 2014 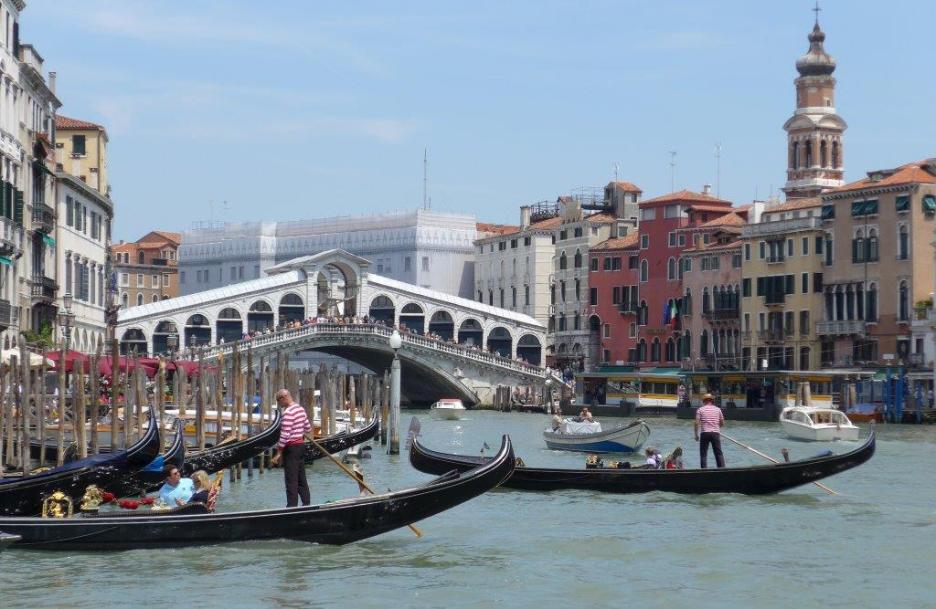 Gondolas on the Grand Canal - Rialto Bridge in the background. 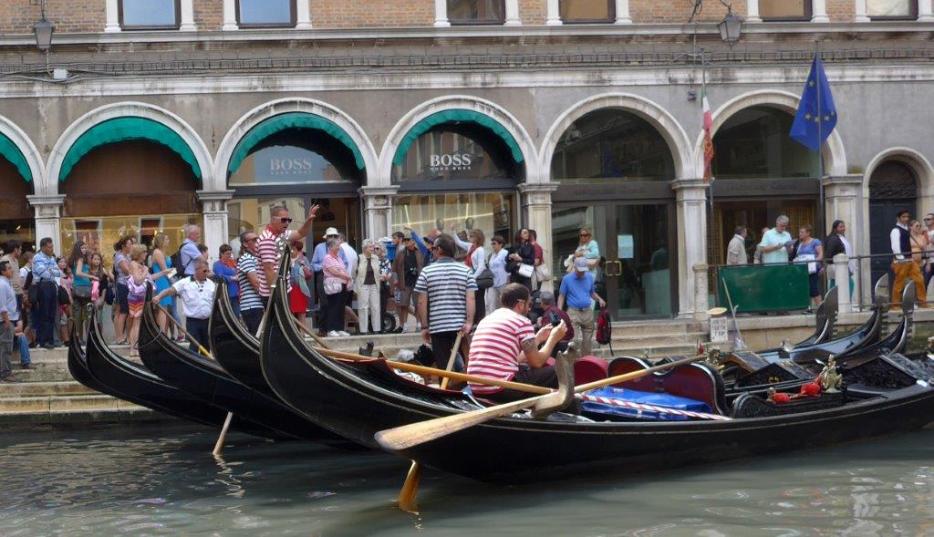 Tourists waiting to board gondolas. 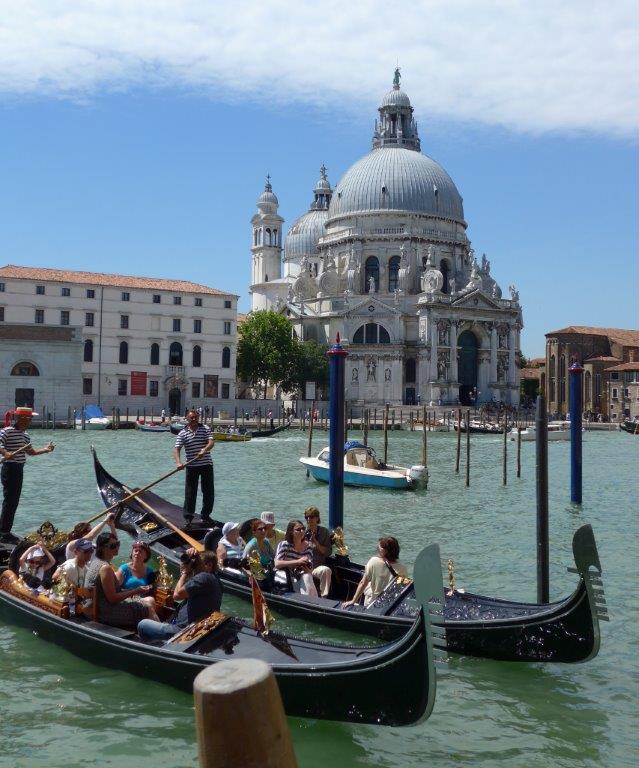 Gondolas with tourists on the Grand Canal. 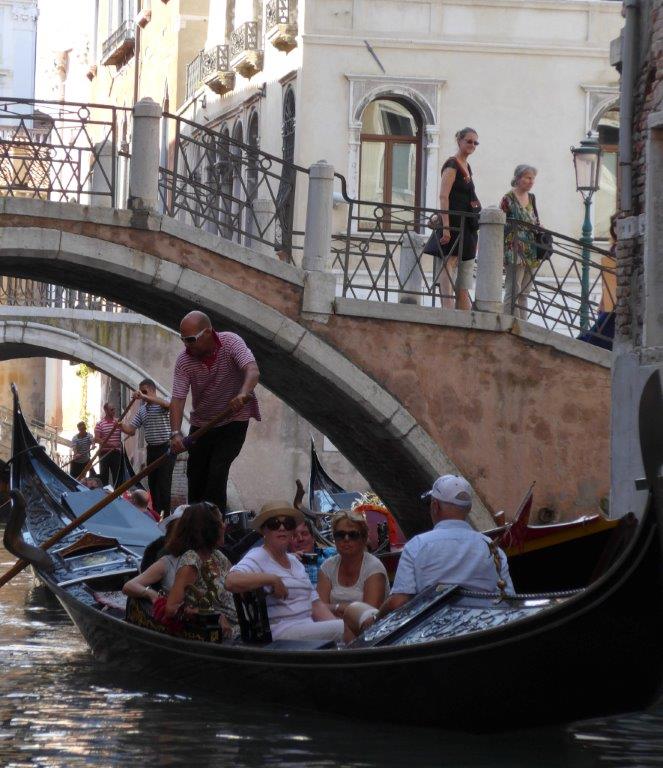 Gondolas and bridges over a small canal. 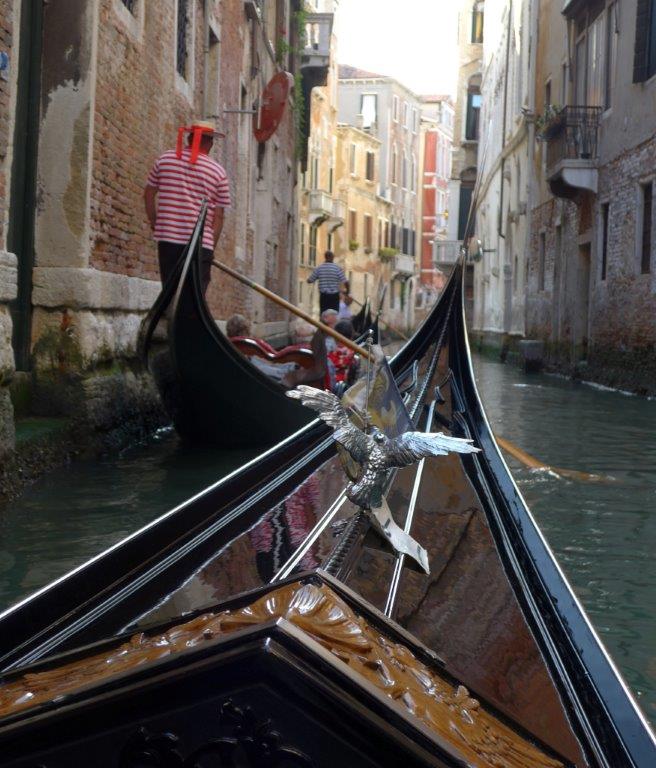 The bow of a gondola. 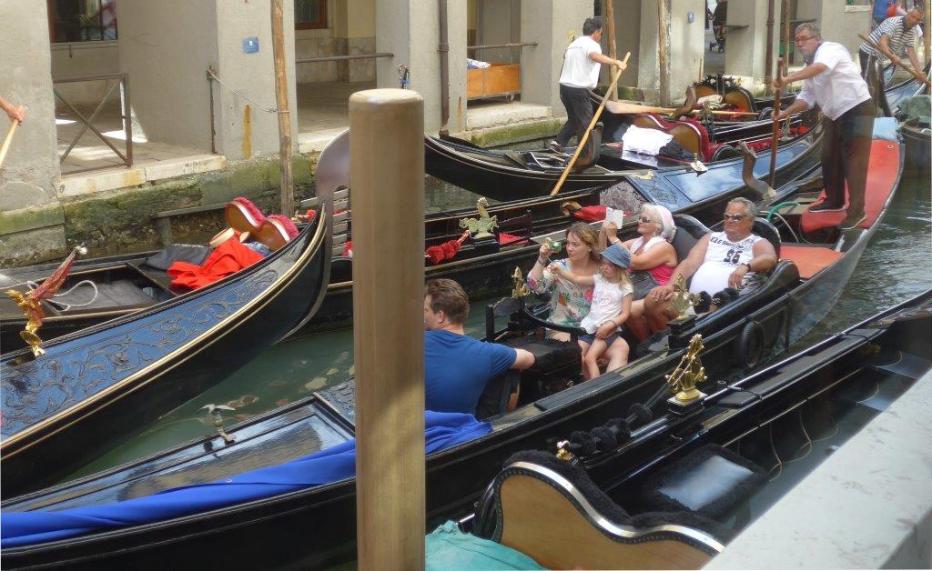 A canal crowded with gondolas.