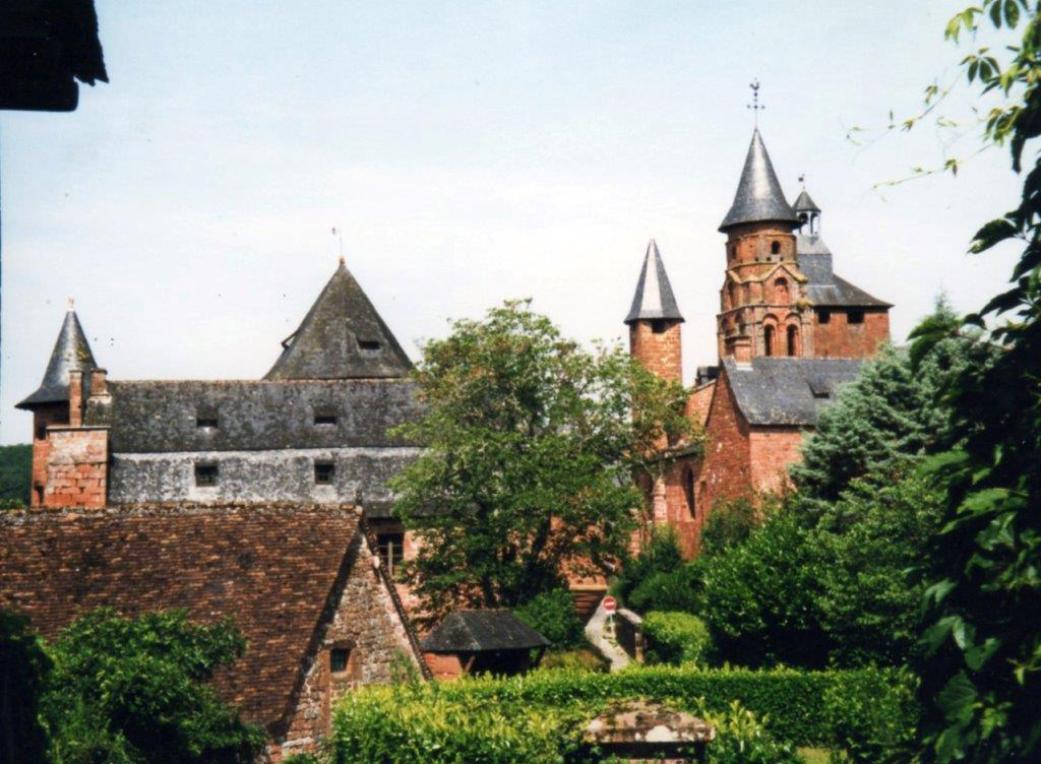 by George Repin
When the independent organisation Les Plus Beaux Villages de France (The Most Beautiful Villages of France) was formed at Collonges-La-Rouge, in 1982, the village became the organisation’s first member.  The organisation’s objective is to promote small and picturesque villages of quality heritage in France.  To be eligible for membership the village must meet specified criteria – a population of less than 2000, be rural in character and have at least two national heritage sites.  Collonges-La-Rouge in the Nouvelle-Aquitaine region of the Dordogne, built on a gentle incline in the midst of walnut groves, complies.  Previously, in 1942, the entire village had obtained classification as a historical monument. 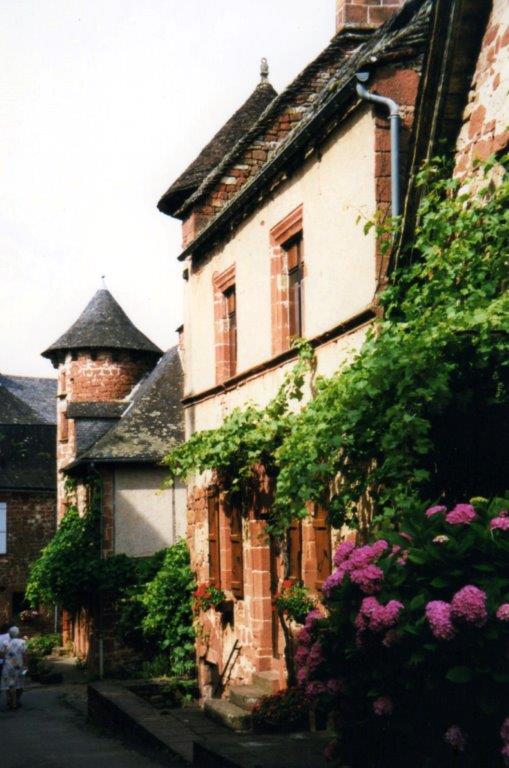 A street of Collonges-la-Rouge with a tower at its end. 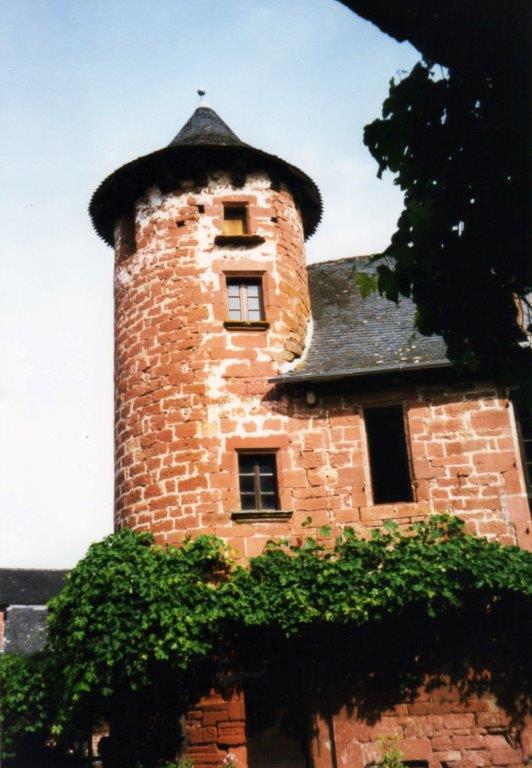 Close up view of the tower.
The outstanding feature of this medieval hamlet is that it is built, entirely, of red sandstone which was easy to obtain from a local quarry. The use of the traditional building stone and the balanced proportions of the various structures give the village its harmonious character. Narrow alleyways wind between ancient buildings with the red stone draped with greenery. It dates back to the 8th Century when the monks of Charroux Abbey founded a priory which attracted a population of peasants, craftsmen and tradesmen who lived and prospered around its fortified walls.  Today the village attracts quality artisans – artists and craftsmen – many of whom make up the few hundred long-time residents servicing tourists (averaging 700,000 in a year) attracted to the village.  In 2008 the population was 460. 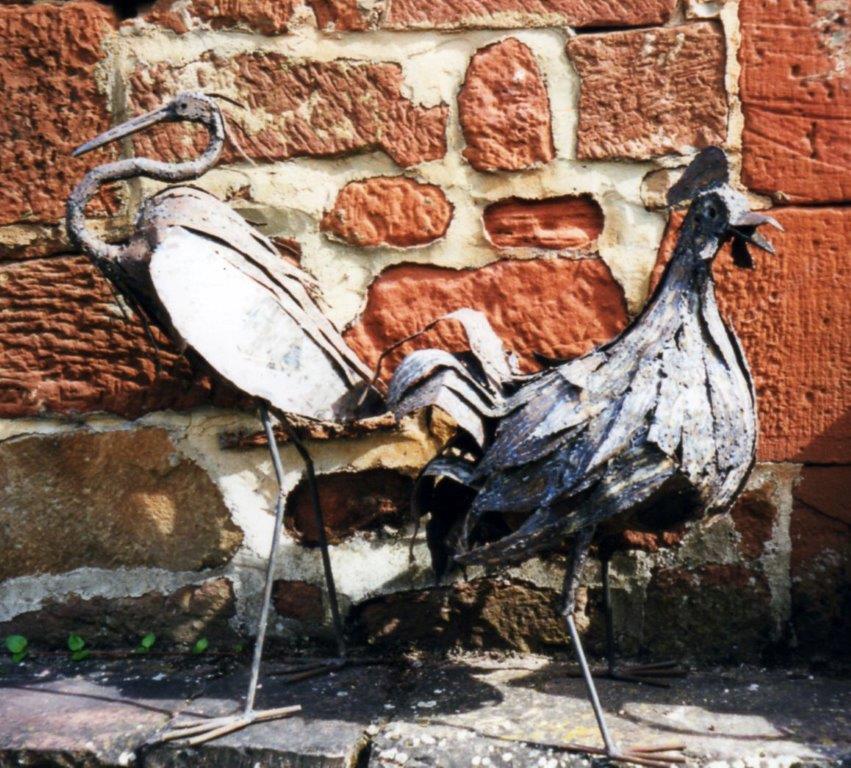 Example of street art placed by artisans in the village. 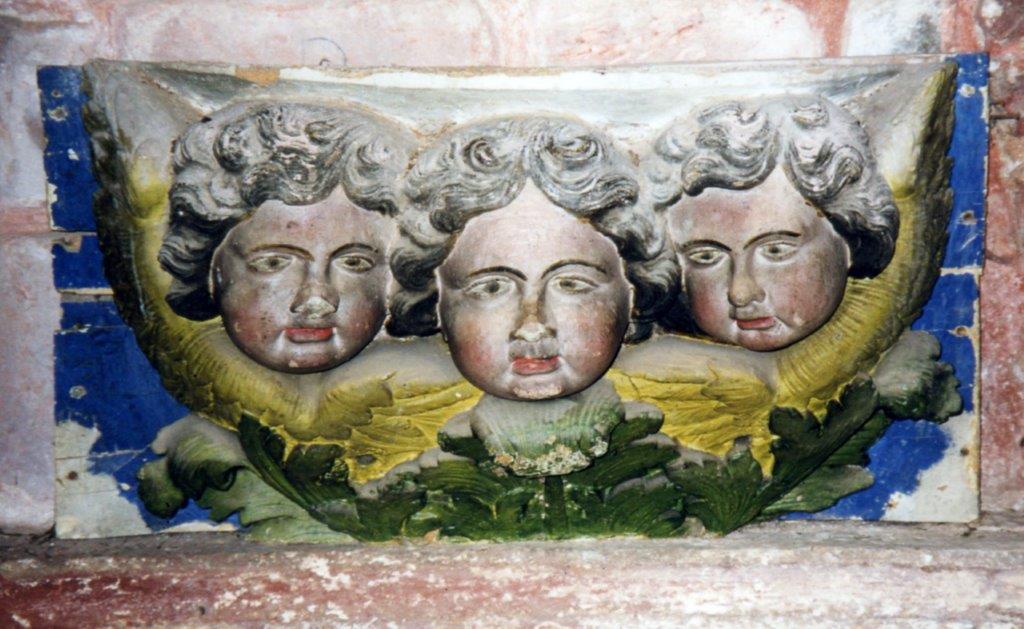 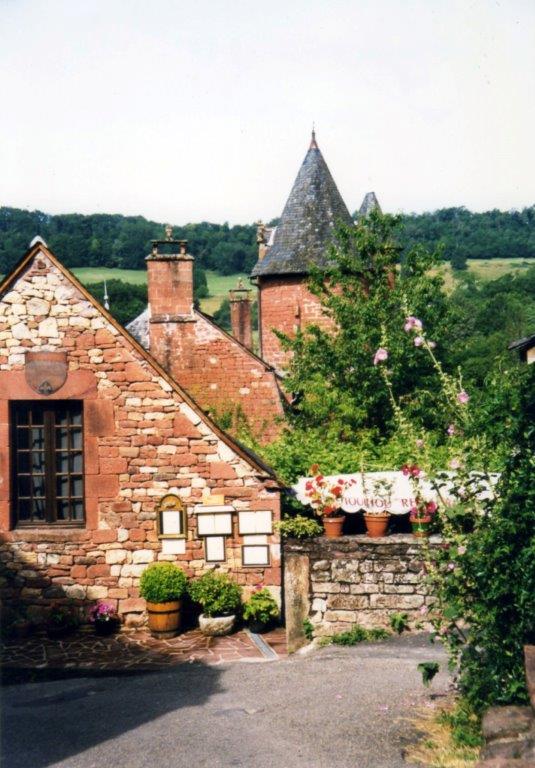 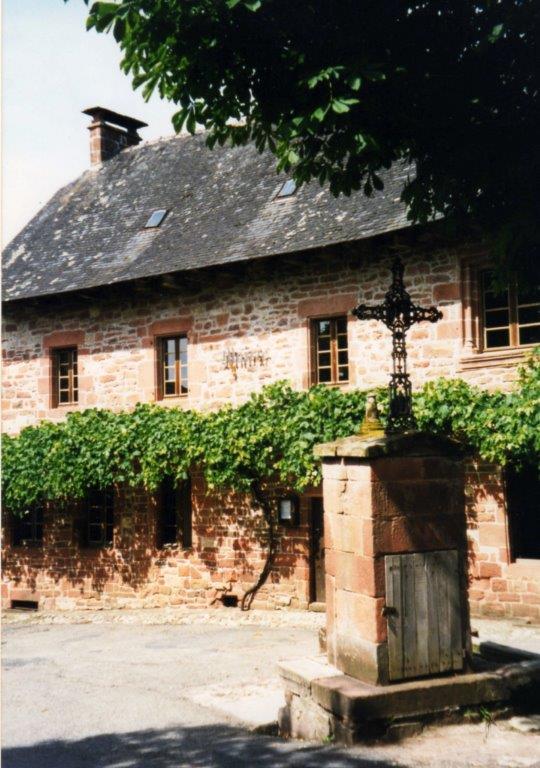 The main town square with a metal cross.
The Romanesque church (L.église Saint-Pierre) was built from the 11th to the 15th Centuries on the foundations of the 8th Century abbey.  It was an important stop for thousands of medieval pilgrims on their route to Santiago de Compostela - a long lasting source of profit for the village. 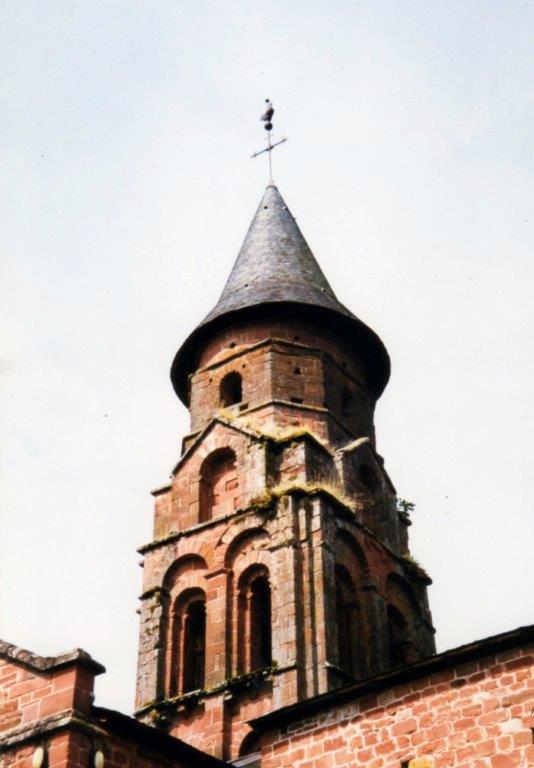 Romanesque steeple of the Saint-Pierre Church (one of the oldest in the Nouvelle-Aquitaine region). 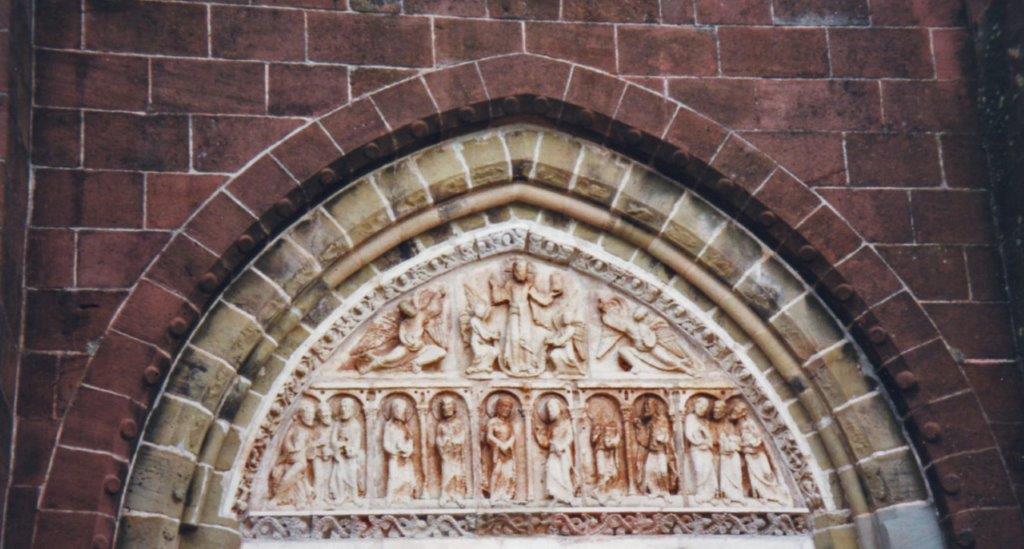 12th Century tympanum of the Saint-Pierre Church carved in local white limestone.  It was hidden during the wars of religion and replaced only in 1923.
The church is unique in that it has two naves, where local Protestants and Catholics conducted their services simultaneously in the 16th Century. Its gates are decorated with a 12th Century tympanum carved in white stone, in marked contrast to the red stone throughout the rest of the village.  It represents the ascension of Christ dominating his mother and the eleven apostles. 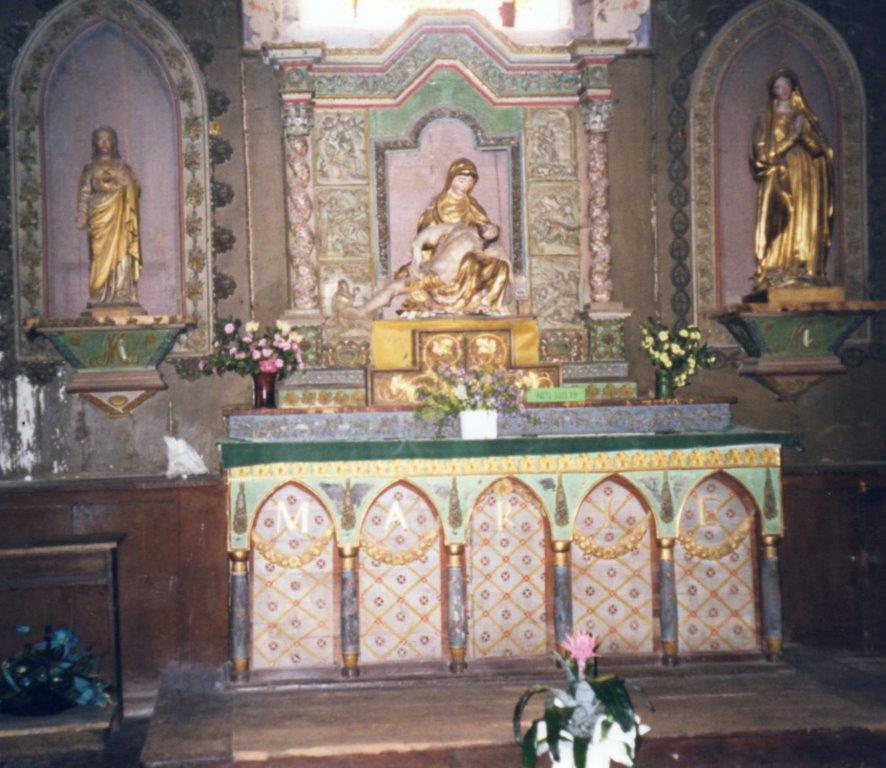 One of the altars in Saint-Pierre Church.
Exploring the village discloses many interesting features including marketplaces dating back to the 16th and 17th Centuries, a fortified wall built in the 14th Century and a bakehouse with a massive stone oven.
Other villages in the Dordogne area, a short distance from Collonges-La–Rouge, worth a visit, include Martel, Salat and Le Rocque-Gageac.
Photographs by George Repin in 1999.