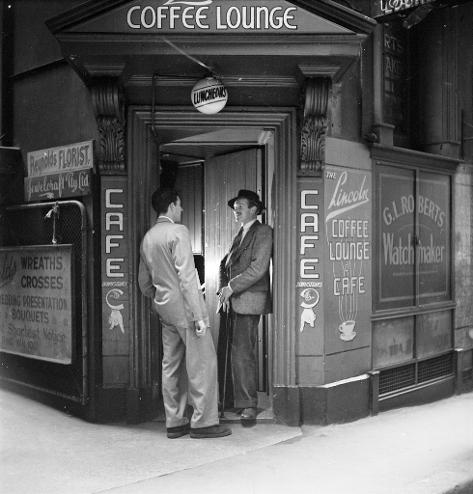 Above: Dick Gooding (on right of door) from Lincoln Coffee Lounge & Cafe, Rowe Street, Sydney / photographed by Brian Bird c. 1948-1951. The Lincoln Coffee Lounge is said to be the birth place of the "Sydney Push" movement in its early days, just after the war. A popular meeting place for artists & writers, it comprised a mixture of university students, lecturers, Bohemians & Libertarians. Photo No: a1629001 courtesy State LIbrary of NSW. Find more detailed information about this photographic collection: here

The Lincoln Coffee Lounge is said to be the birth place of the "Sydney Push" movement in its early days, just after the war. A popular meeting place for artists & writers, it comprised a mixture of university students, lecturers, Bohemians & Libertarians. Photo No a1629007, Courtesy the State Library of NSW. 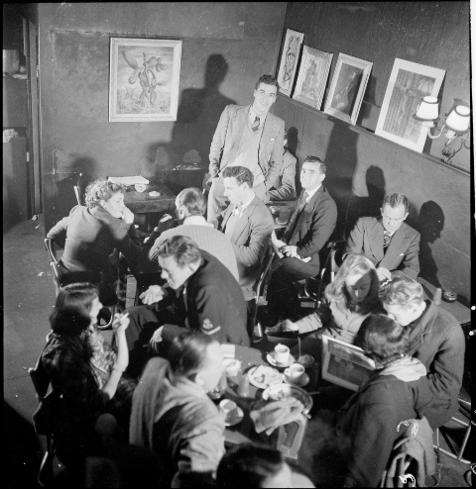 THE SYDNEY PUSH
By George Repin AM

Reference to the Sydney Push in the article Remembering Rowe Street in the last issue may have sparked interest in what this was.  This is a brief outline.

When Sydney was a much smaller city, with a population of about one million people in the 1950s, intellectual and artistic life, though relatively limited, flourished in what is now the central business district.  In this environment, influenced by the empirical philosophy of John Anderson, Professor of Philosophy at the University of Sydney and his Freethought Society, the Sydney Push provided a formative experience for several generations of young adults, during the late 40s and into the 50s and 60s.  At the centre of influence within the Push were the Libertarians whose views were anarchic and pessimistic and who embraced anti-careerism and sexual freedom at a time long before the “pill” launched the sexual revolution in the wider community.

In a society which was essentially conservative, in the aftermath of World War II and post-war uncertainty, those coming into contact with the Push were exposed to rejection of respect for authority, family values, hard work and sobriety.  Some, such as the almost legendary figures Darcy Waters and Roelof Smilde,  recognised by many as leaders of the Push, were involved throughout its existence.  Some like the poets Lex Banning and Harry Hooton, and Margaret Elliott (later, as Margaret Fink, the producer of the outstanding award-winning movie “My Brilliant Career” ) stayed for varying periods of time while others, such as Paddy McGuiness, Germaine Greer, Robert Hughes and even Clive James, were affected and influenced, but moved on.  While many who were part of the Push are now names well known to the wider community those most influential at its heart are largely forgotten.

The Lincoln Inn, a coffee lounge which opened in 1948 in a basement on the corner of Rowe Street and a lane which ran at the back of Repin’s Quality Inn to King Street, attracted “bohemia” as its clientele.  Its customers were students, artists, actors, journalists, musicians and the poets Banning and Hooton. On the walls were drawings of the young John Olsen.

When the Lincoln closed in March 1952 “the Rowe Street crowd” moved to the first floor of Repin’s Coffee Inn at 130 King Street.  During the quiet afternoons, free of the lunch and dinner crowds, they sat in the dark timber cubicles against the windows looking over King Street towards Culwulla Chambers and conducted their vigorous discussions.  Lex Banning, despite suffering from cerebral palsy, was an active participant over the years as was Darcy Waters.  Here Margaret Fink became a Push regular.  Many others came and went.  Repin’s at 175 Pitt Street, near the GPO also was a haunt of the coffee drinking conversationalists who were part of the Push.

In the evening coffee gave way to other beverages and members of the Push were regulars at various city pubs for longer and shorter periods, including The Tudor in Phillip Street, The Assembly, and the Newcastle Hotel in George Street near 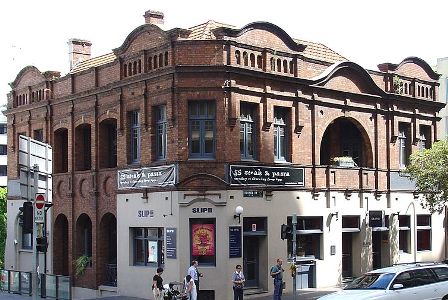 Circular Quay.  However, in late 1957 The Royal George in Sussex Street became the Push pub and its back room became the centre of a thriving social scene with the Sydney Libertarians engaging in vigorous debate.

By 1970 the Push began to fall apart, a victim of its own internal contradictions.  Having stood aside from involvement in the pursuit of professional or political goals in an orthodoxy of non-conformism and now faced with significant community issues such as censorship, women’s liberation and the green ban movement in which some Libertarians had become involved, the Push faded away.