Rhodes is the largest of the approximately 200 islands known as the Dodecanese in the south-eastern Aegean Sea, lying in the sea lane between East and West.  Fossilised sea shells found on the slopes of its mountains confirm that Rhodes and other nearby islands (such as Symi, Tilos and Chalki) were brought up from the seabed by earthquakes.

Although 270 nautical miles from Piraeus the port of Athens, Rhodes and surrounding islands are part of Greece.

To those familiar with the Seven Wonders of the Ancient World the Colossus of Rhodes will be remembered  as the massive bronze statue said to have stood astride the entrance to  the harbour of Rhodes (although evidence as to its actual position is scanty). The sculptor Chares of Lindos after twelve years work completed it in 292 BCE.  However it stood only until 266 BCE when, during a severe earthquake, it cracked at the knees and fell. It was left lying in a heap for centuries until it was sold to a Jewish merchant, and is said to have required 900 camels to transport it.

With an average annual 300 days of sunshine and mild climate Rhodes is a popular tourist destination welcoming over a million and a quarter visitors each year, to enjoy its natural beauty and immerse themselves in the legacy and history that a succession of occupiers have left.

Tourist vessels from Piraeus entering the ancient harbour of Rhodes, Mandraki, after passing the Ayios Nikolaos Fortress (St. Nicholas Fortress), are met by statues of a stag and a doe on columns – one on each side of the channel.  Three medieval windmills on the long breakwater on the east of the harbour ground the wheat arriving on merchant vessels. 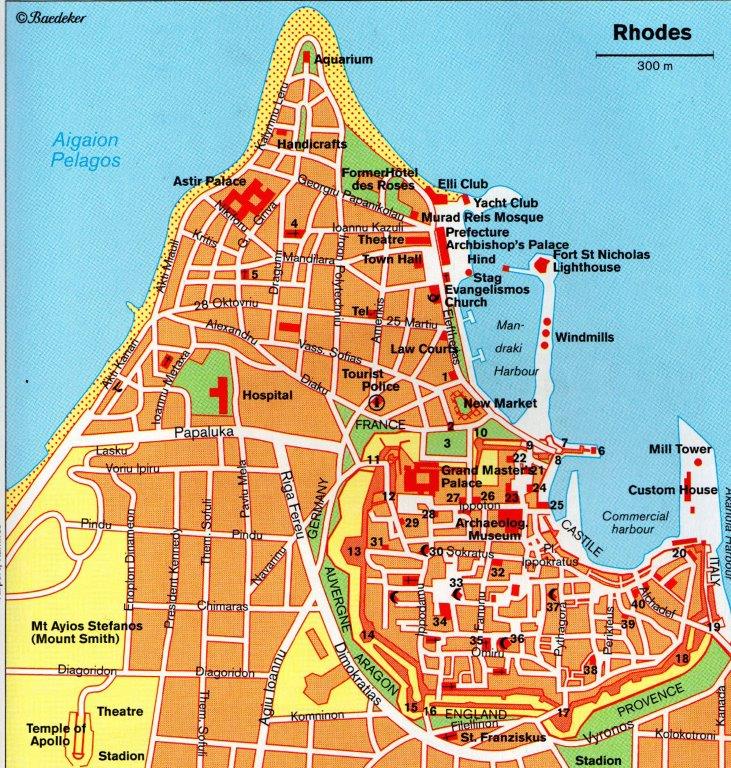 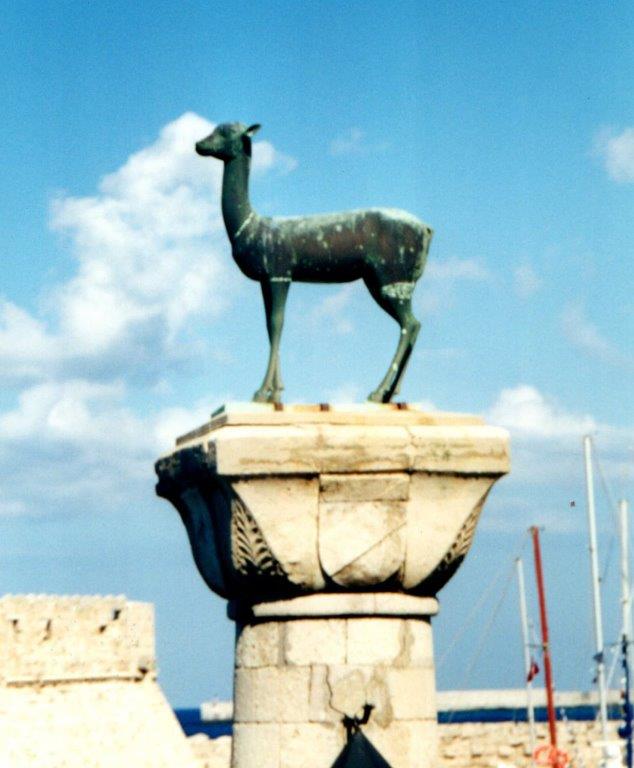 The Deer on the eastern side of the entrance to the Mandraki Harbour. 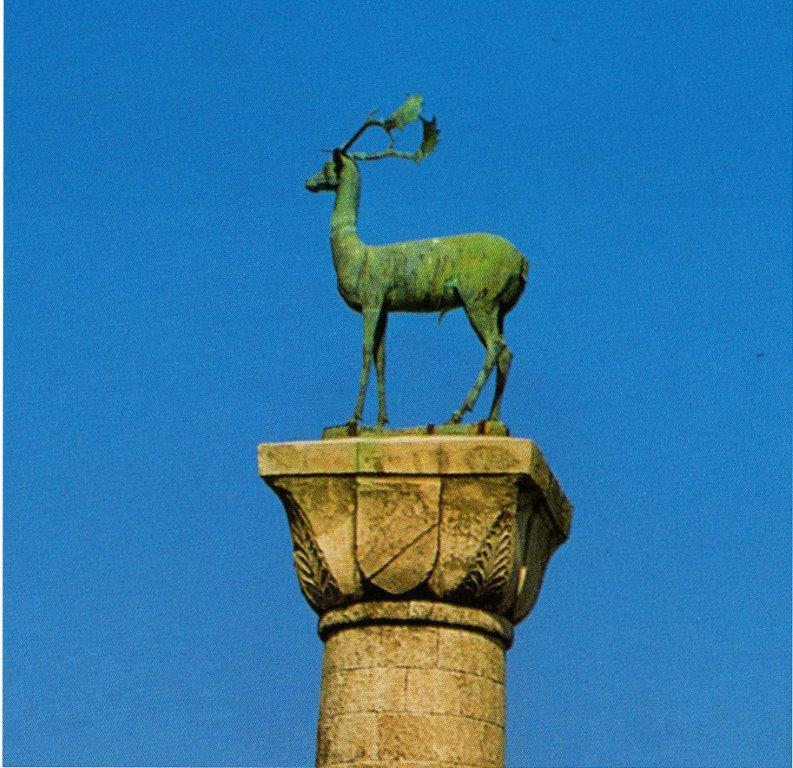 The Stag on the western side of the entrance to the  Mandraki Harbour. 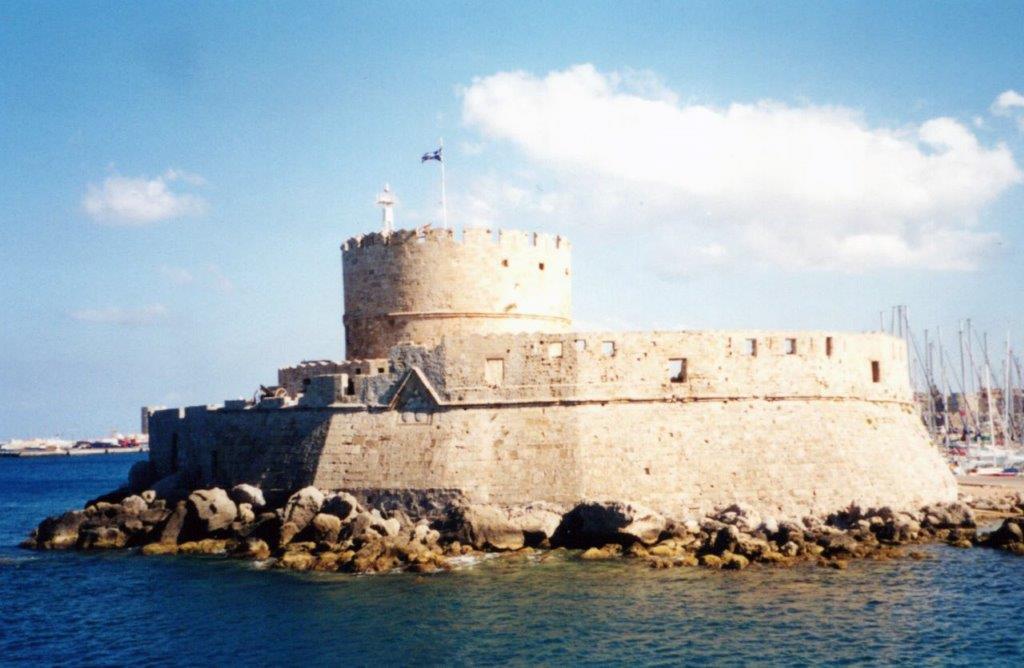 St. Nicholas Fortress on the eastern side of the entrance to the Mandraki Harbout. 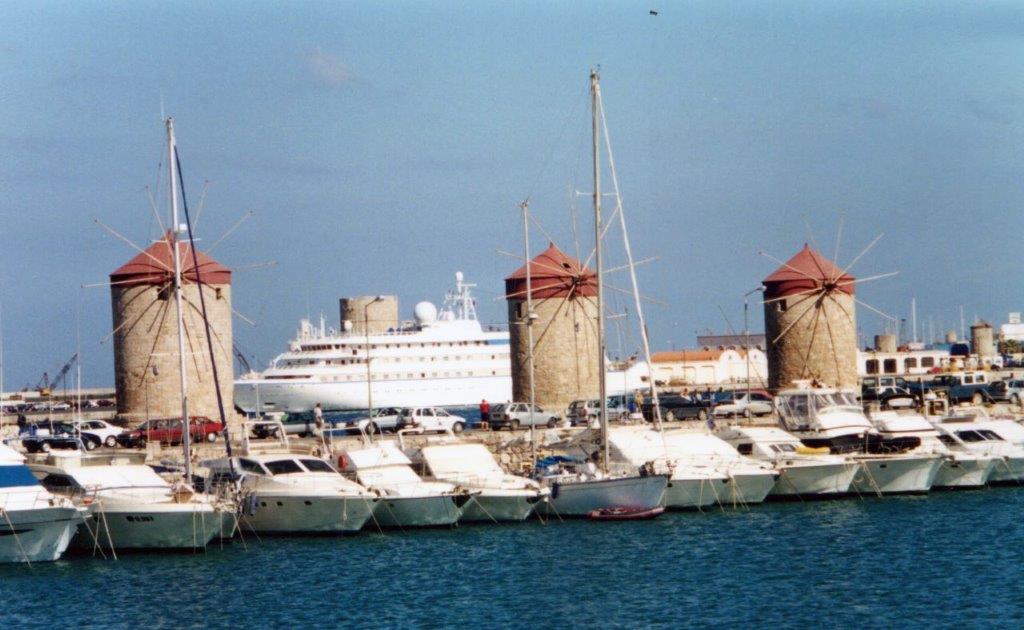 The three windmills on the breakwater of the Mandraki Harbour.

The Ancient Town, which in 1988 was included in the UNESCO list of World Heritage sites, provides an unique picture of a medieval town, with an imposing series of buildings erected by the Knights of St John, together with mosques and other Turkish buildings built later, giving it a distinctive character.

It is surrounded by a 4 Km long circuit of walls with towers, bastions and a moat.  These ramparts were partially erected on the foundations of earlier Byzantine enclosures, and were constantly maintained and remodelled between the 14th and 16th Centuries embodying modifications as the techniques of war changed. An impressive feature is the Marine Gate on the north-east side by the Commercial Harbour, giving access to the town from the Mandraki Harbour, with a beautiful relief sculpture of the Virgin. A walk on the walls is rewarded with excellent views including a good overview of the Grand Master’s Palace. 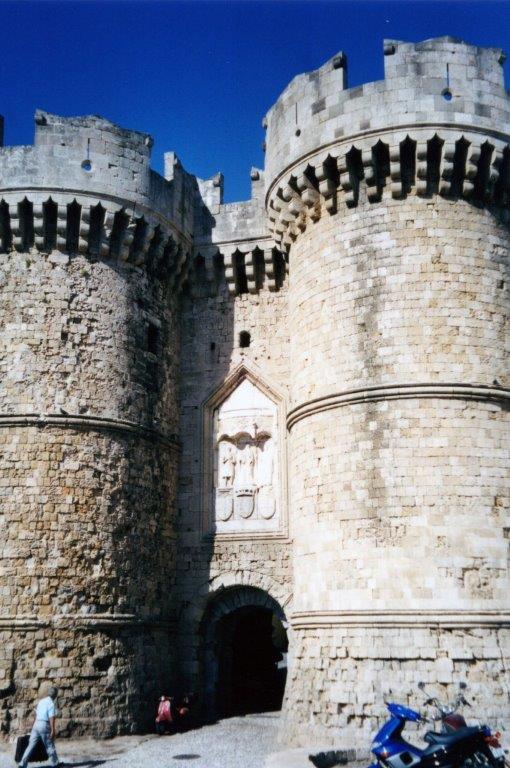 Twin towers of the Marine Gate entrance to the medieval town. 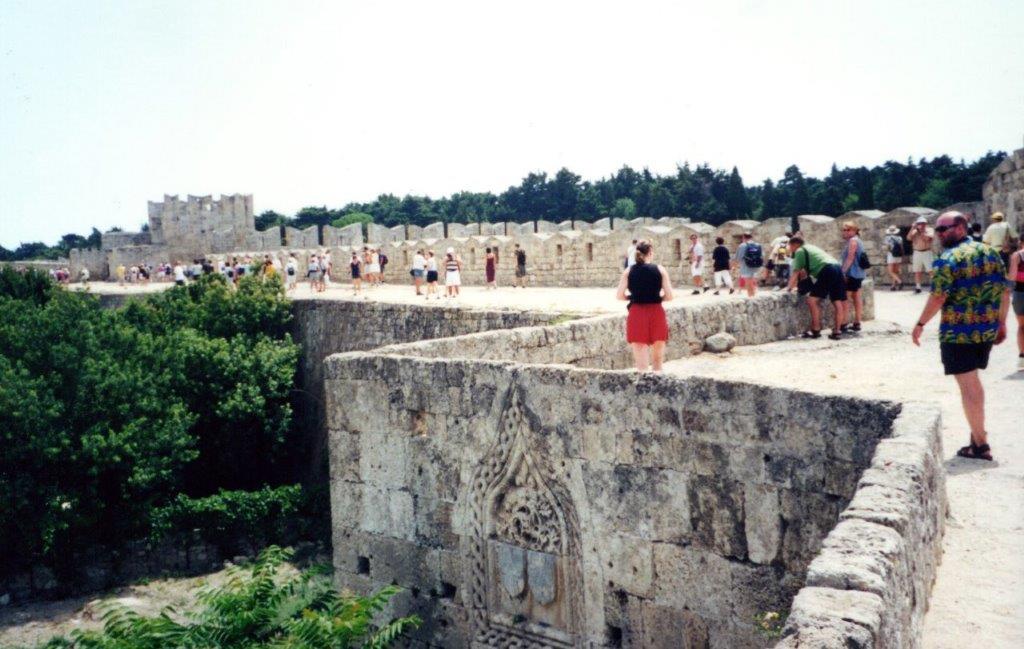 Walking on the ramparts around the medieval town. 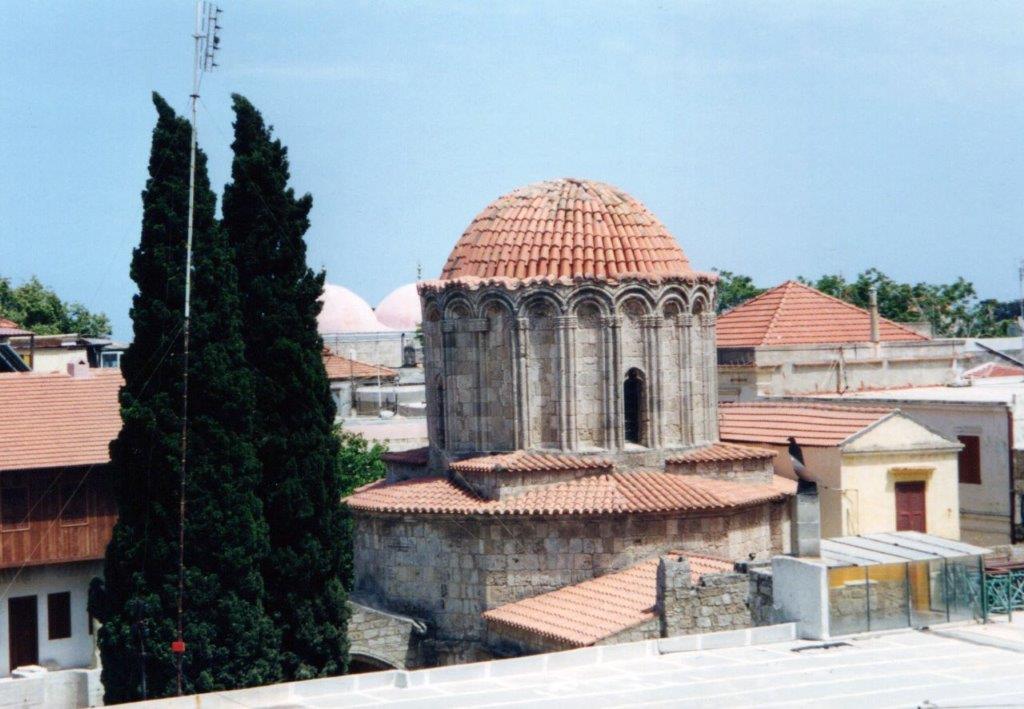 A view from the ramparts. 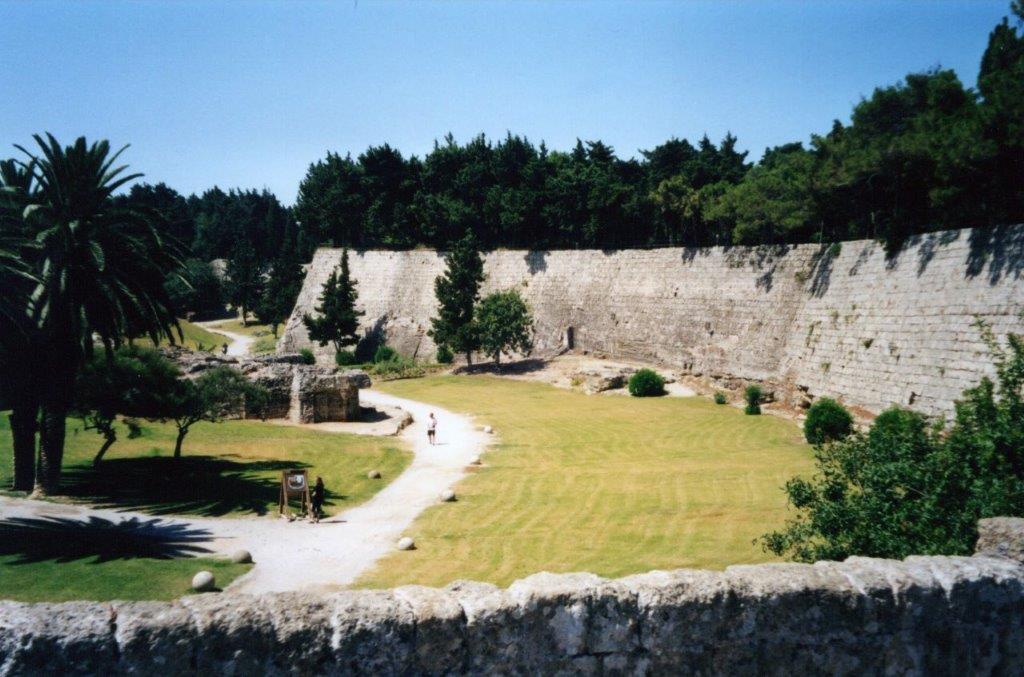 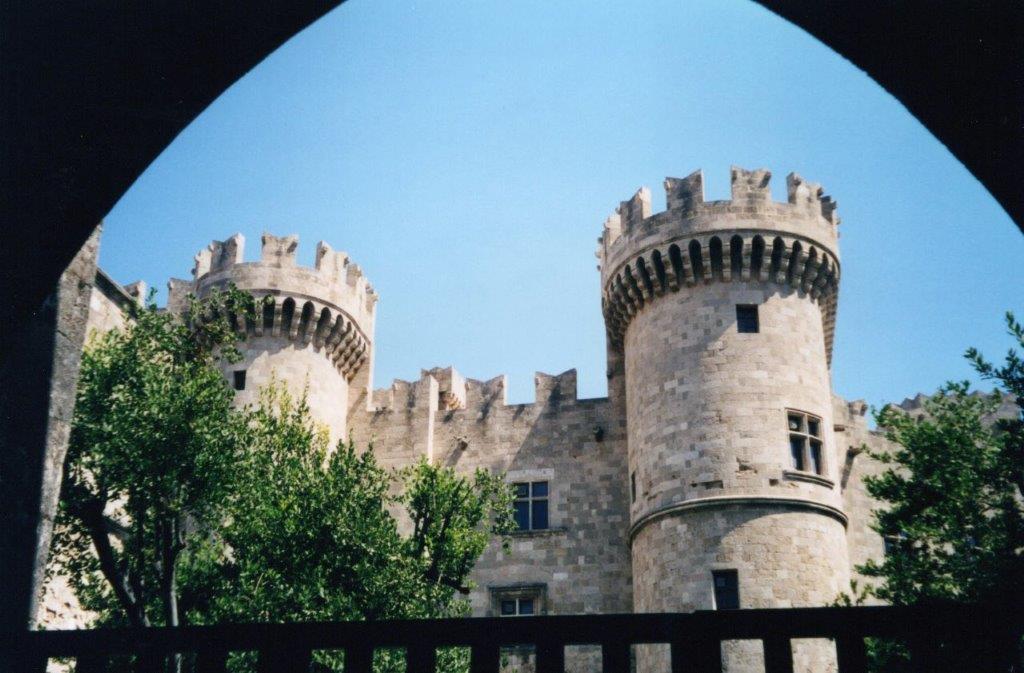 Towers of the Palace of the Grand Masters seen from the ramparts. 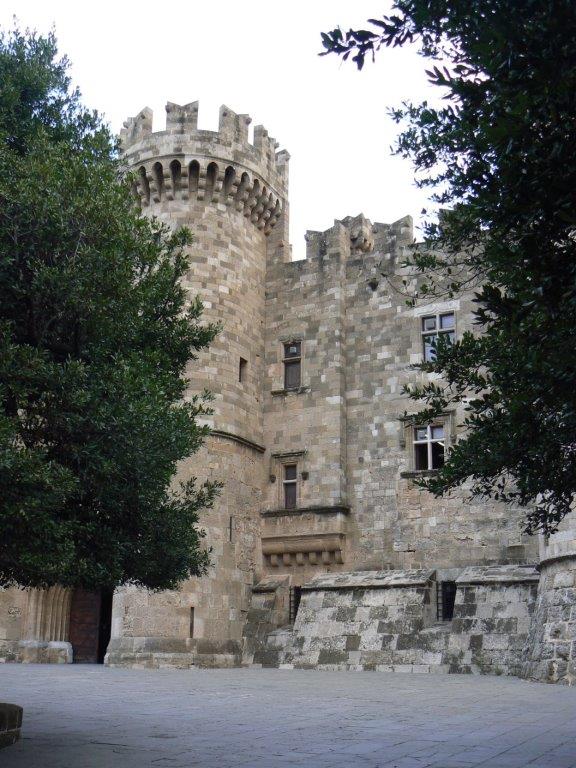 Towers of the Palace of the Grand Masters.

The time when Rhodes was occupied by the Order of the Knights of St. John – the 213 years between 1309 and 1522 – is considered its most flourishing period.  The Knights left imposing evidence of their time on the island and gave it its particular colour which the Ancient Town retains, in its impregnable walls, its gates, the churches and the hospitals, the inns and the majestic palaces.

The accompanying photographs attempt to convey what Rhodes offers a visitor. 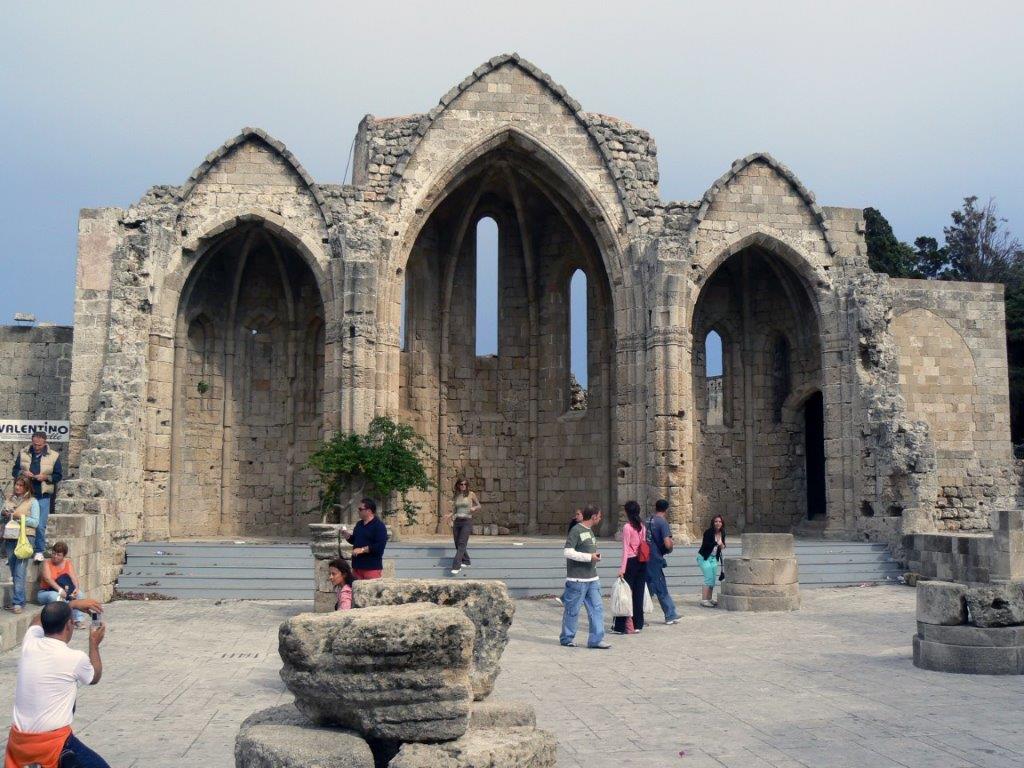 Remnant of a church. 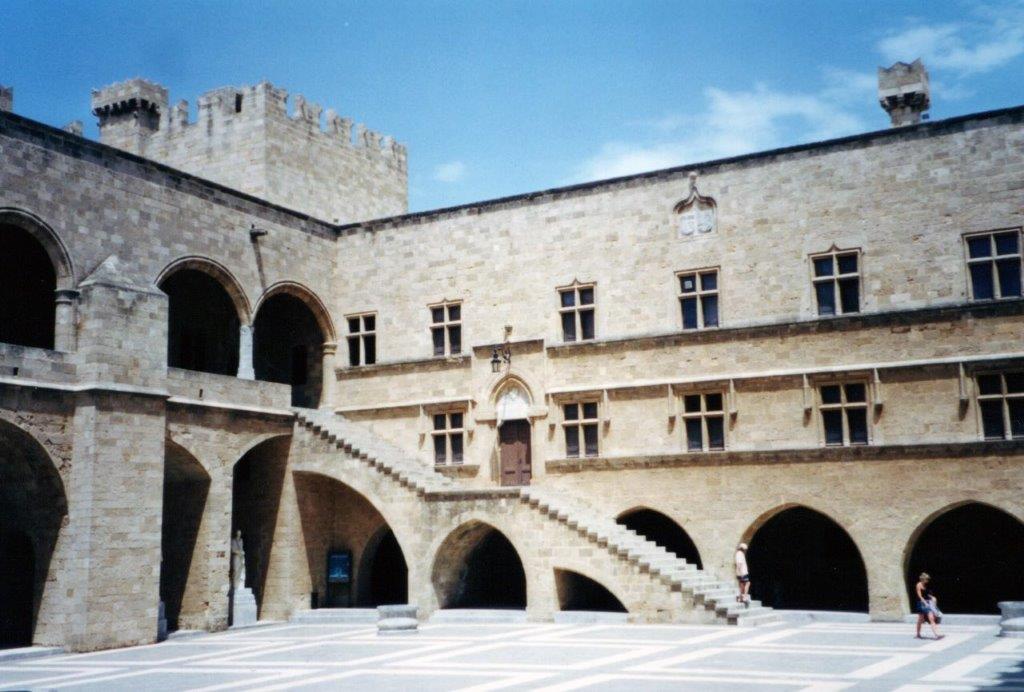 Courtyard of the Palace of the Grand Masters (“The Castello”). 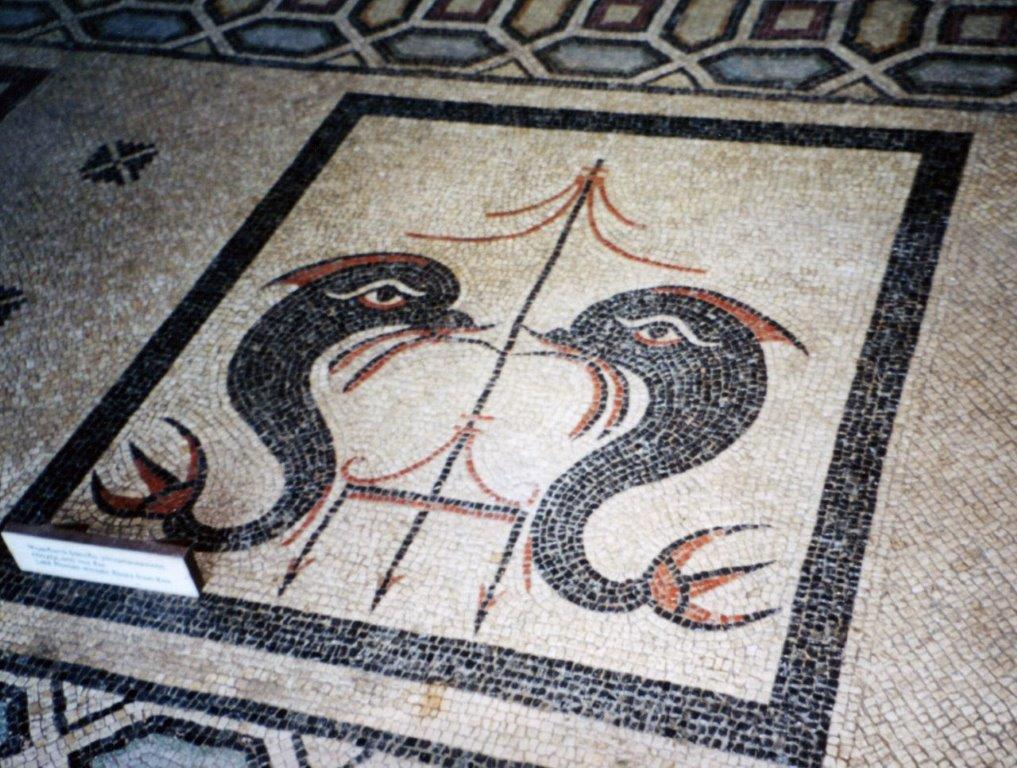 A mosaic in the Castello. 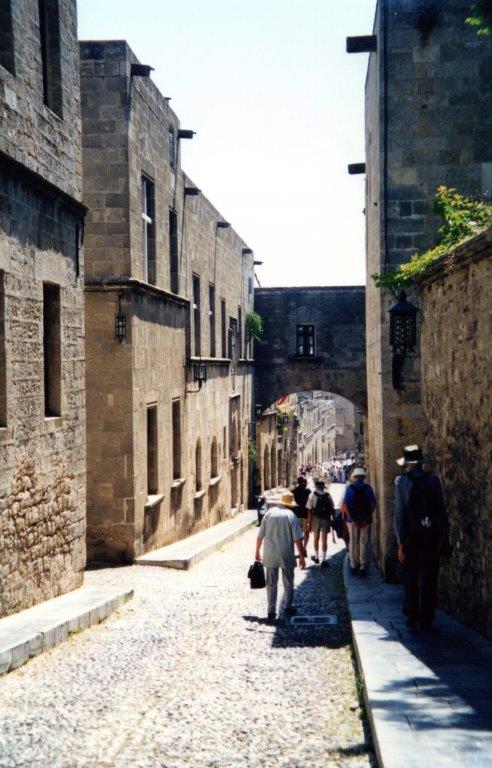 The Knights’ Street which still preserves the aspect of a 15th-16th c. street. 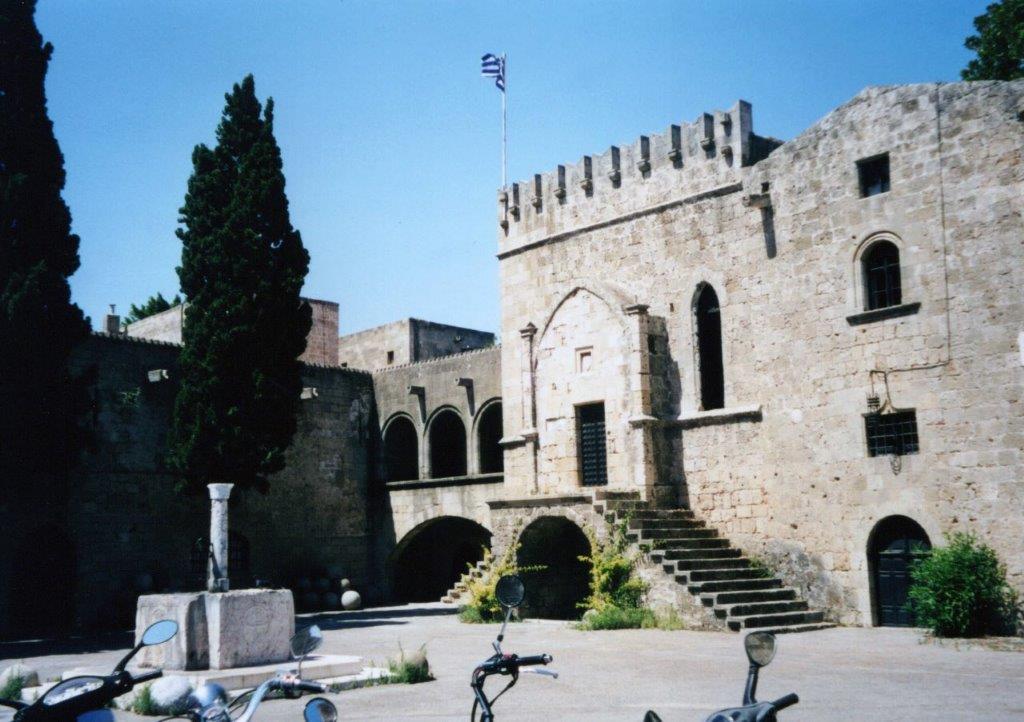 Argyrokastro Squuare with a small fountain constructed from fragments of an Early Christian baptismal font. 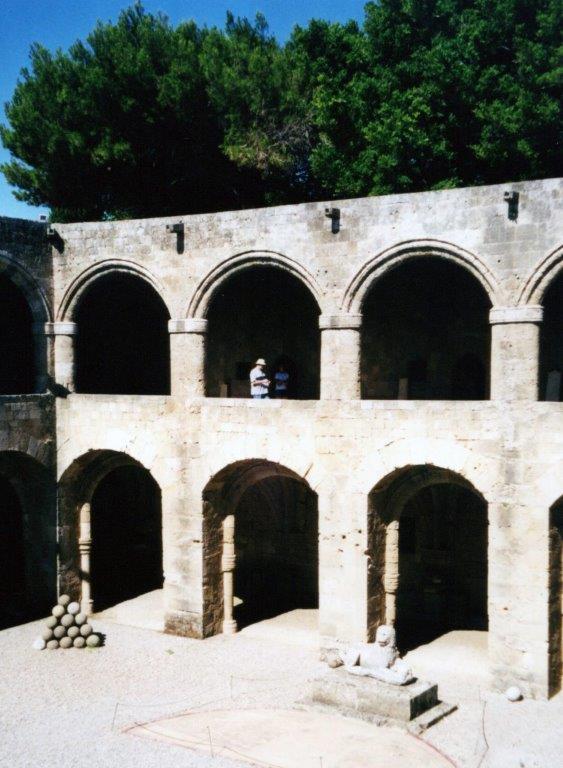 Main courtyard of the Archaeological Museum  (formerly the Hospital of the Knights). 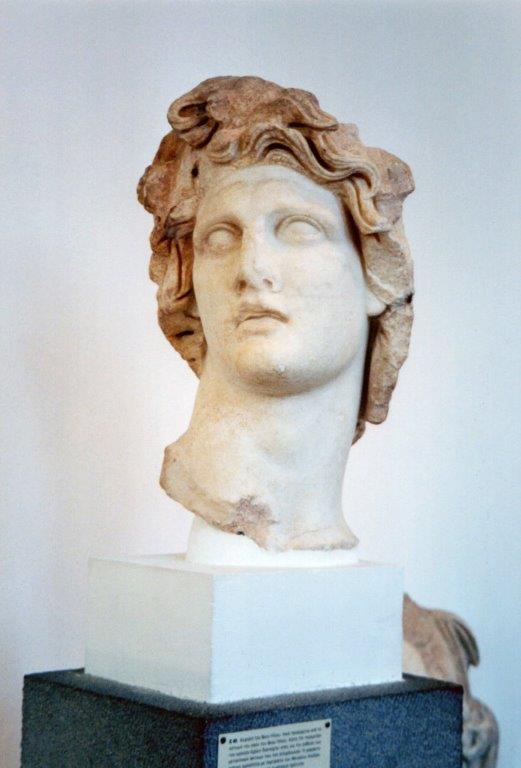 Head of Helion – in the museum. 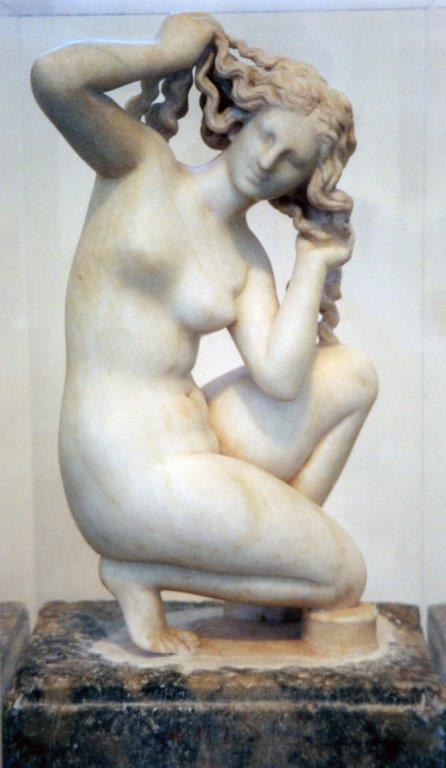 The Aphrodite of Rhodes – in the museum. 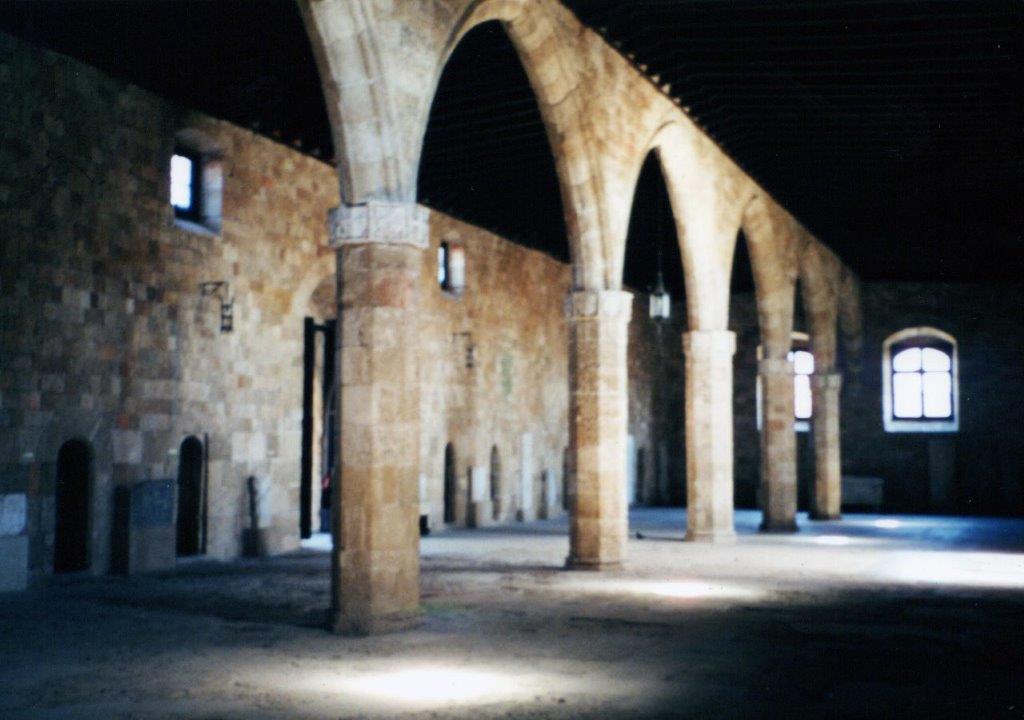 Patients’ ward in the Knights’ Hospital’. 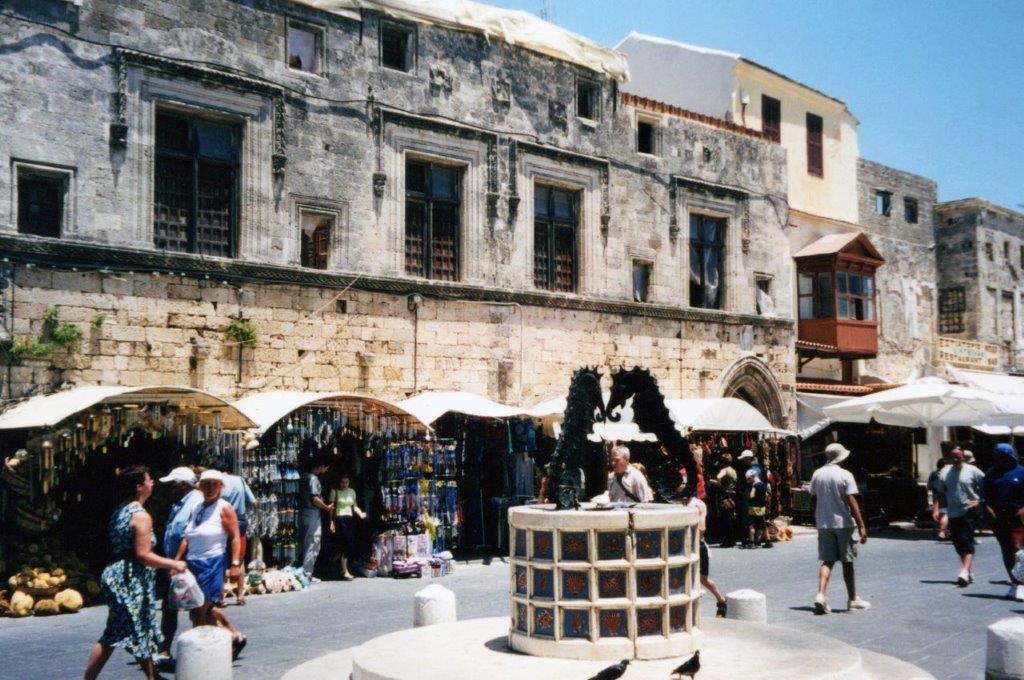 The Square of the Jewish Martyrs commemorating the Jews deported from Rhodes during World War II- fountain with three bronze sea-horses. 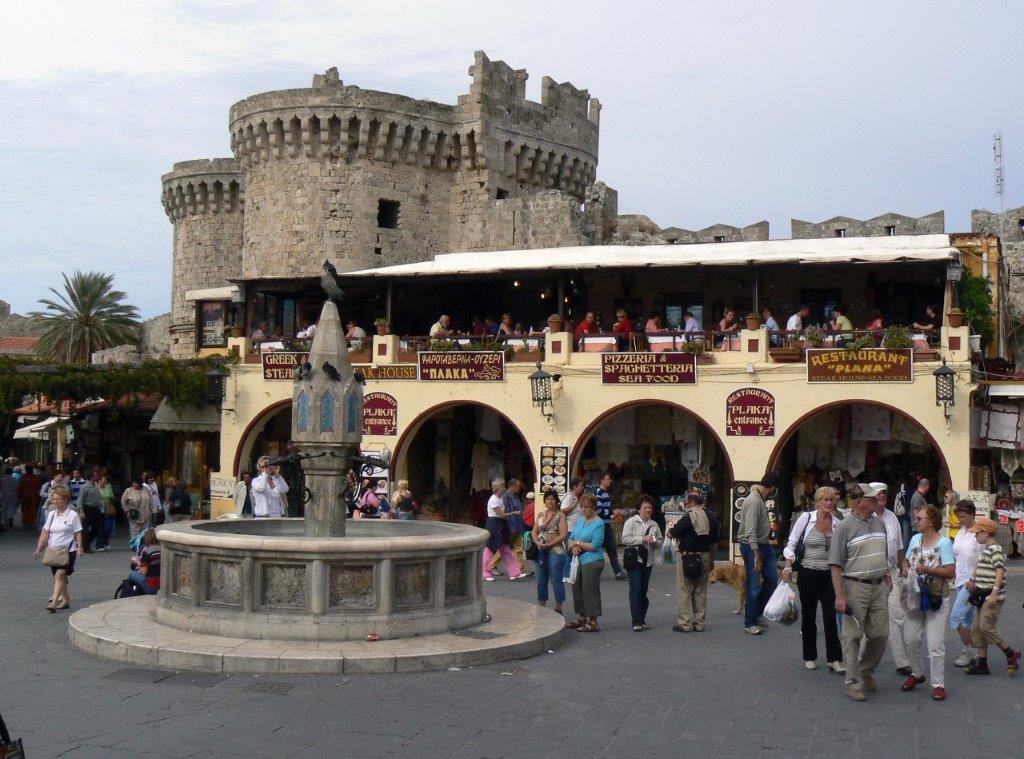 Hippocrates Square dominated by the twin towers of the Marine Gate – a popular meeting place.