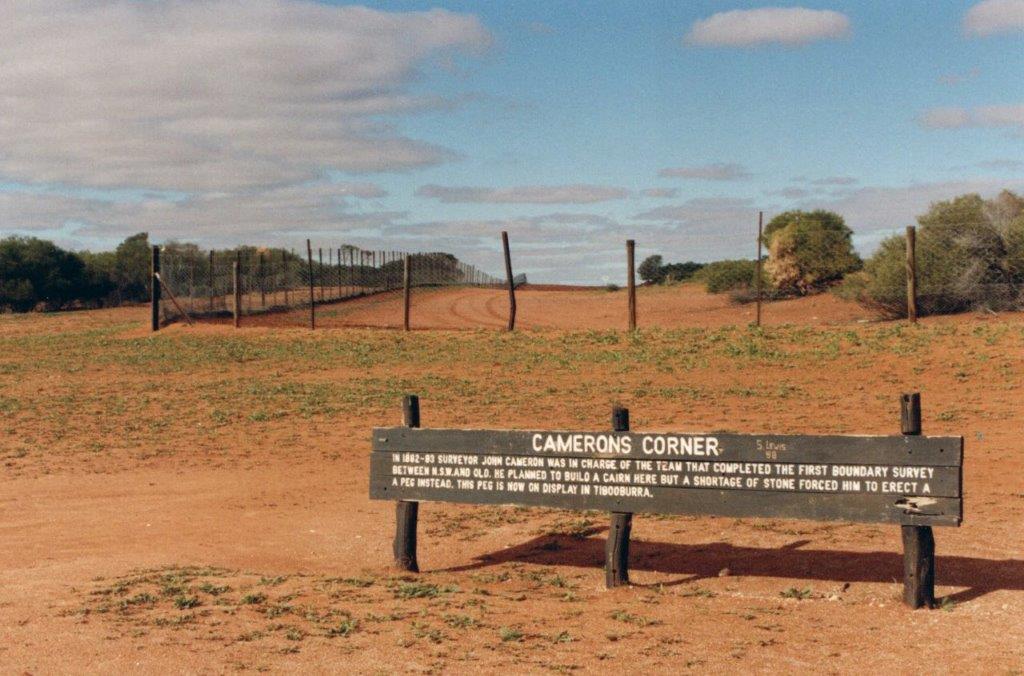 Sturt National Park, the driest, most remote of the National Parks of New South Wales, lies in the far north-west corner of the State covering an area of 344,097 hectares.  It is arid, semi-desert country with an average rainfall of only 175 mm per year – and that is unreliable.  However, when the rain does come it can be torrential, and the unsealed roads within the park quickly become impassable.  Access by vehicles then is strictly controlled, not only because of safety considerations but also, when the surface is transformed by the water to mud, vehicles cause considerable damage to the roads. 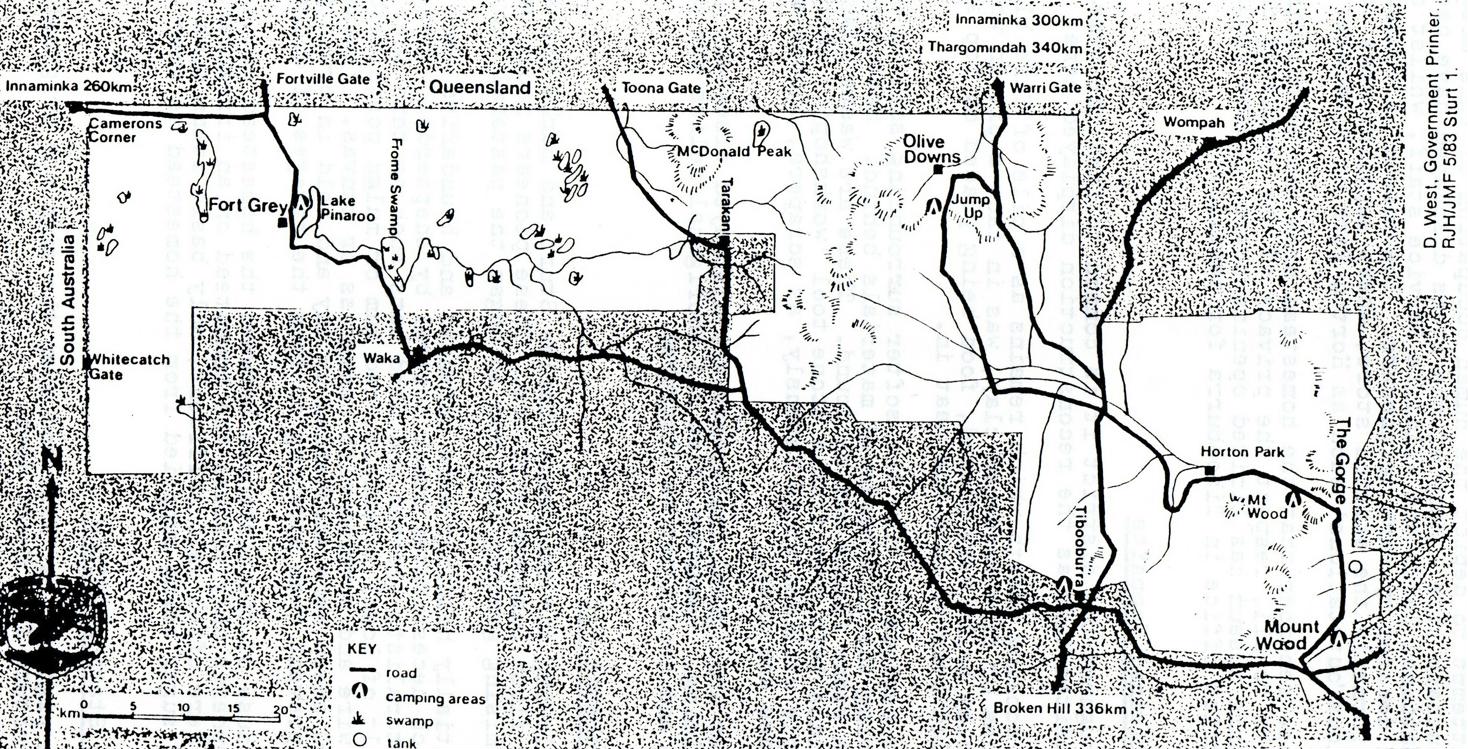 The Park is named after Captain Charles Sturt who spent a year in and around the area between 1844 and 1845 in search of the great “inland sea”.

The aim of our group was to travel through the National Park from Tibooburra to the “corner peg” at Cameron Corner. Rains greeted us in Tibooburra. 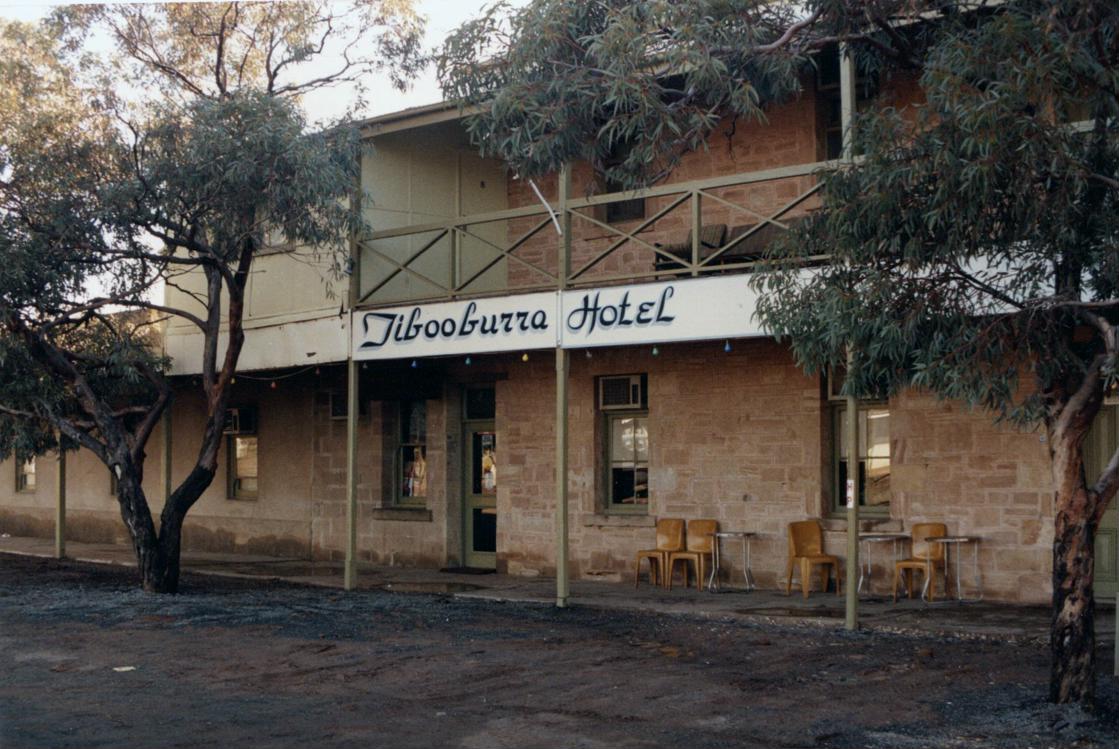 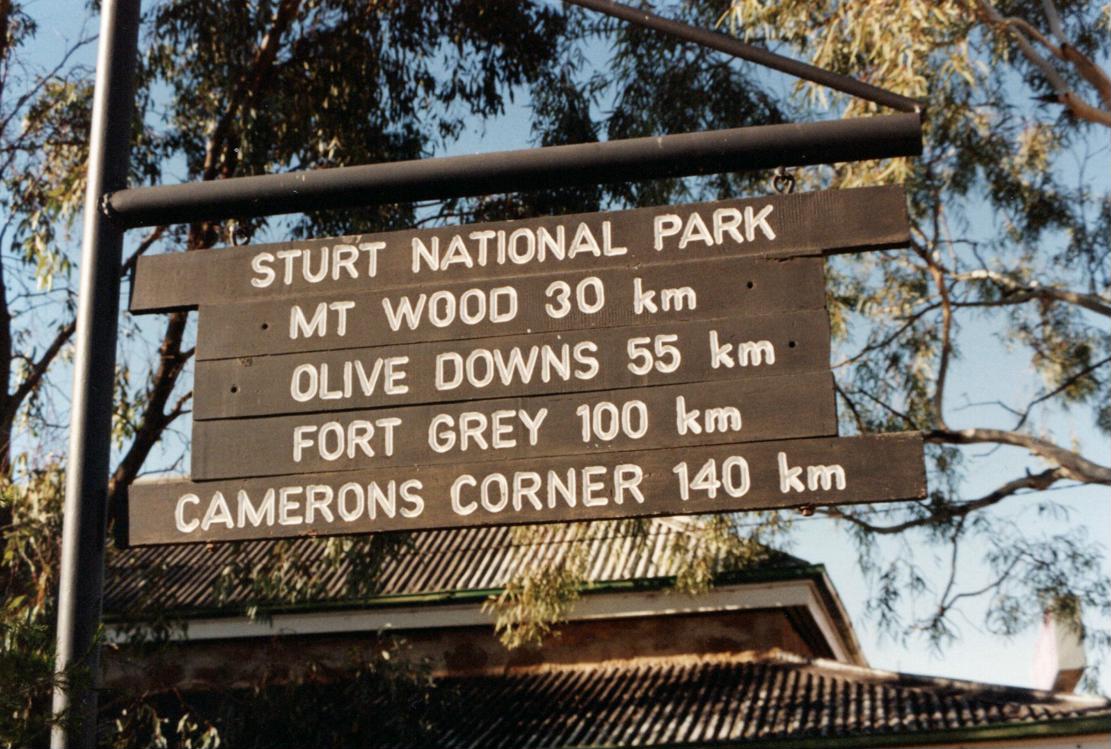 The Park is just north of Tibooburra stretching to the Queensland border in the north and the South Australian border to the west.  A smaller section of the Park stretches east to Mt. Wood. Tibooburra means “heaps of rocks” in the local aboriginal language – ancient granite tors surround the town.  Payable gold was discovered in April 1881 and up to 2000 diggers flocked to the area, which was named the Granite Diggings, but the shallow gold soon petered out and prospectors left the field.

Sturt National Park is the traditional land of the Wangkumara people who travelled widely through the arid land to make the most of waterholes, permanent soaks, useful plants and animals. Middens and stone relics can be found throughout the park. 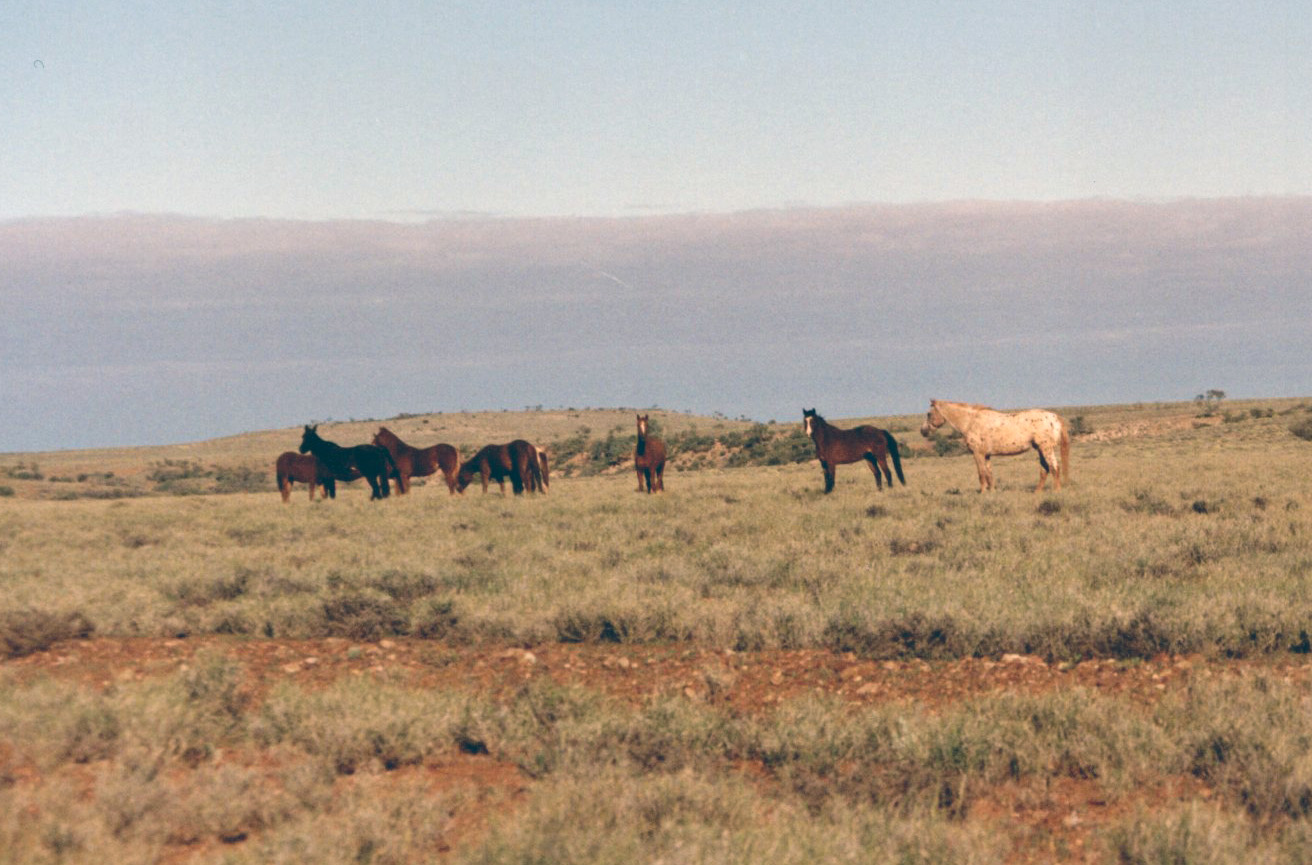 A wide range of vegetation types are in the Park – woodlands, shrublands, grasslands and swamplands. Major plant communities exist in these habitats, identified by the dominant plant species present. Five habitat types have been identified.

For example there are continuous tracts of red sand/clay plains of stable low dunefields around the Fort Gray area in the west.  Throughout the plains and between the dunes are claypans, temporary canegrass/lignum swamp communities and lake basins with characteristic white sand/clay soils.  As a contrast, to the east there are Gibber Plains with undulating, stony areas with low shrubs of saltbush, bluebush and tussocks of Mitchell grass.  Around Tibooburra are the Granites – the oldest rock formations in the park dating back 450 - 400 million years. 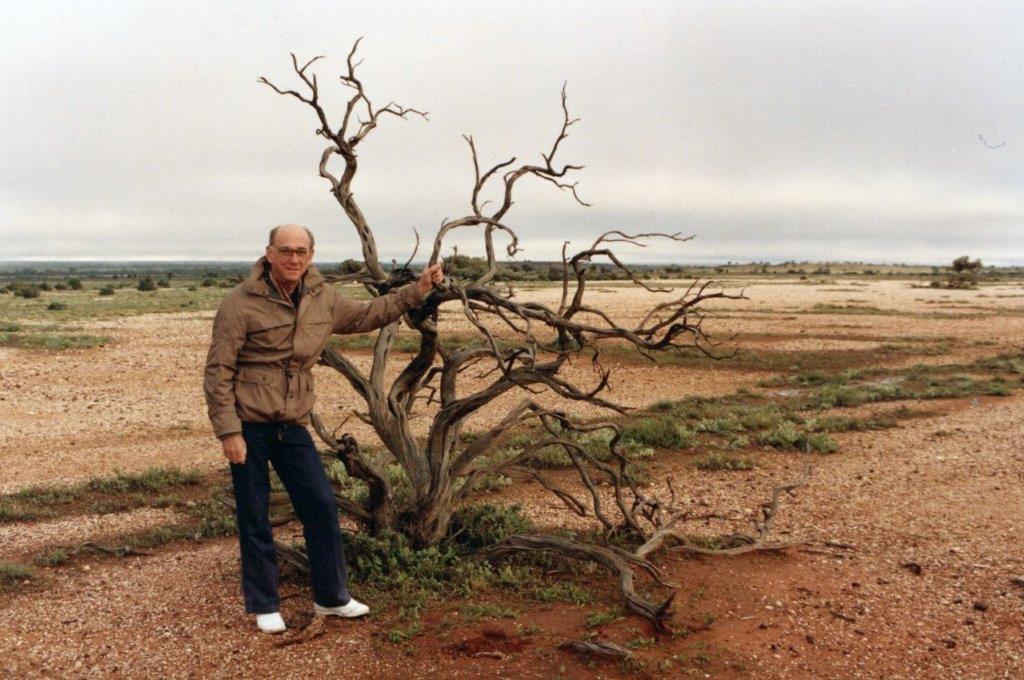 A typical dead tree (on the right!!) 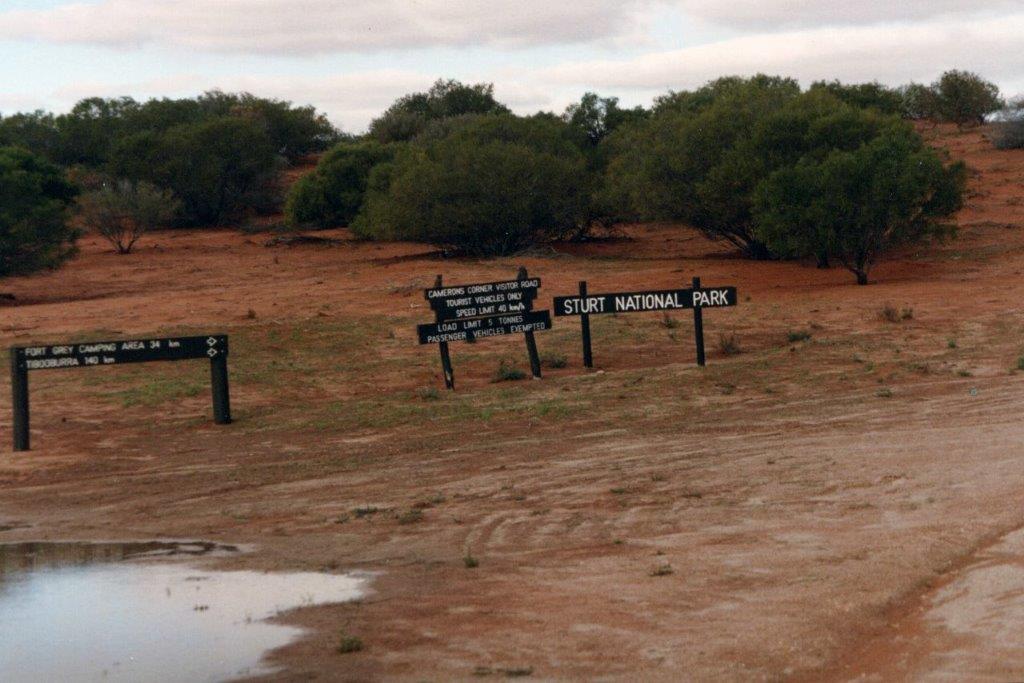 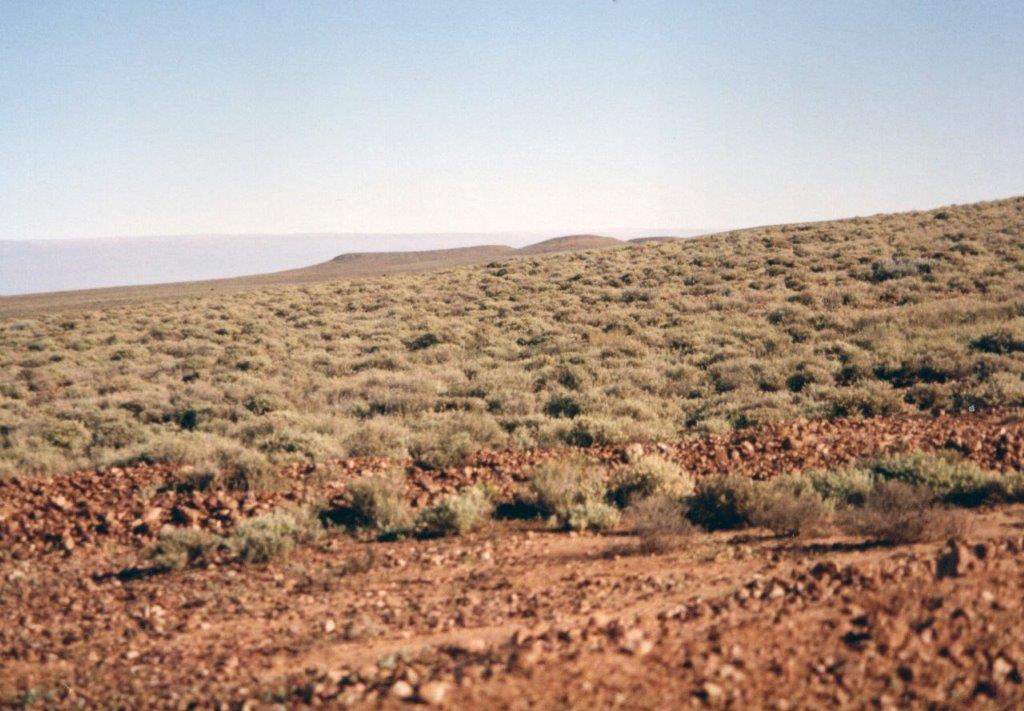 Vegetation on a hillside. 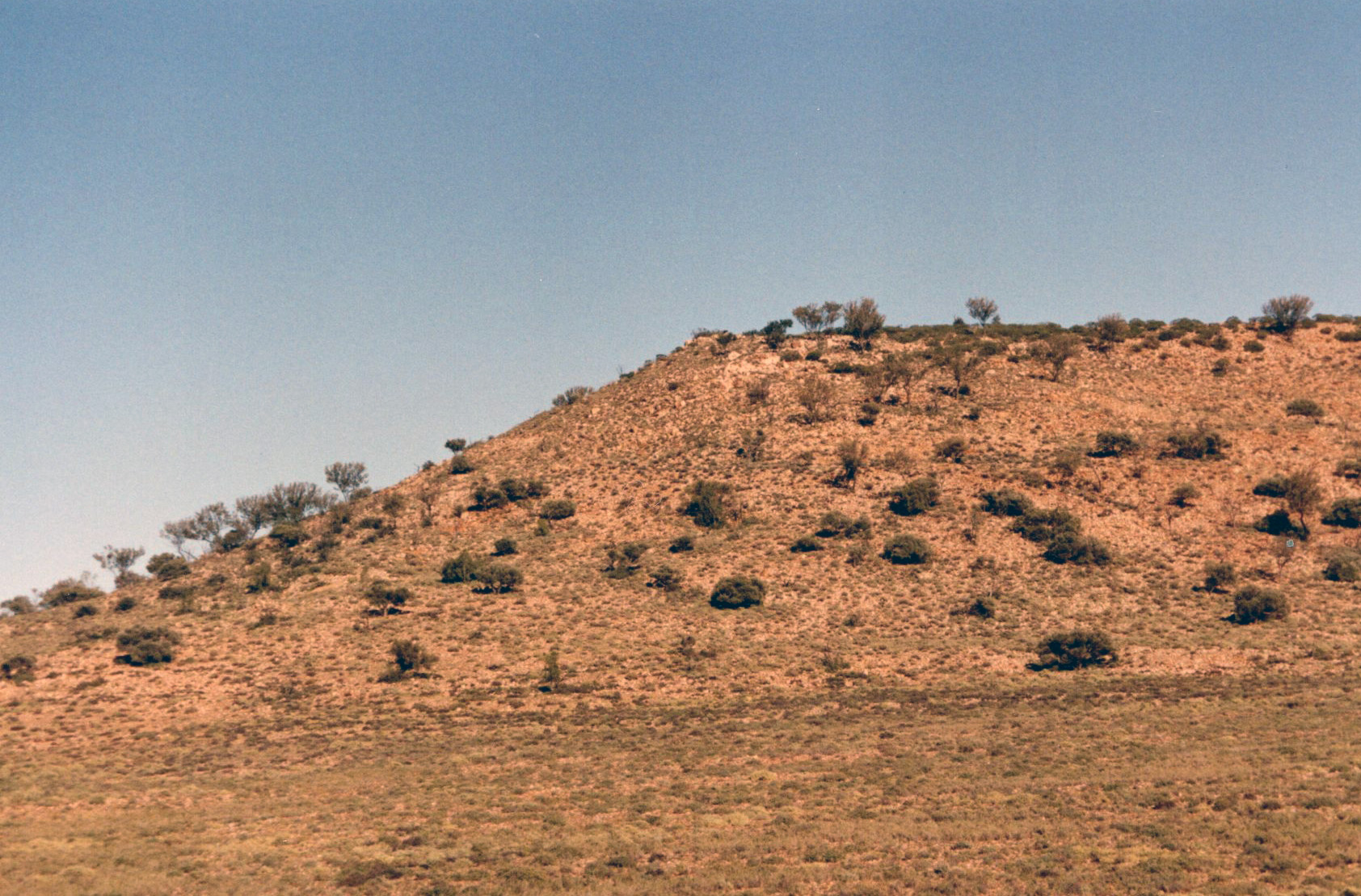 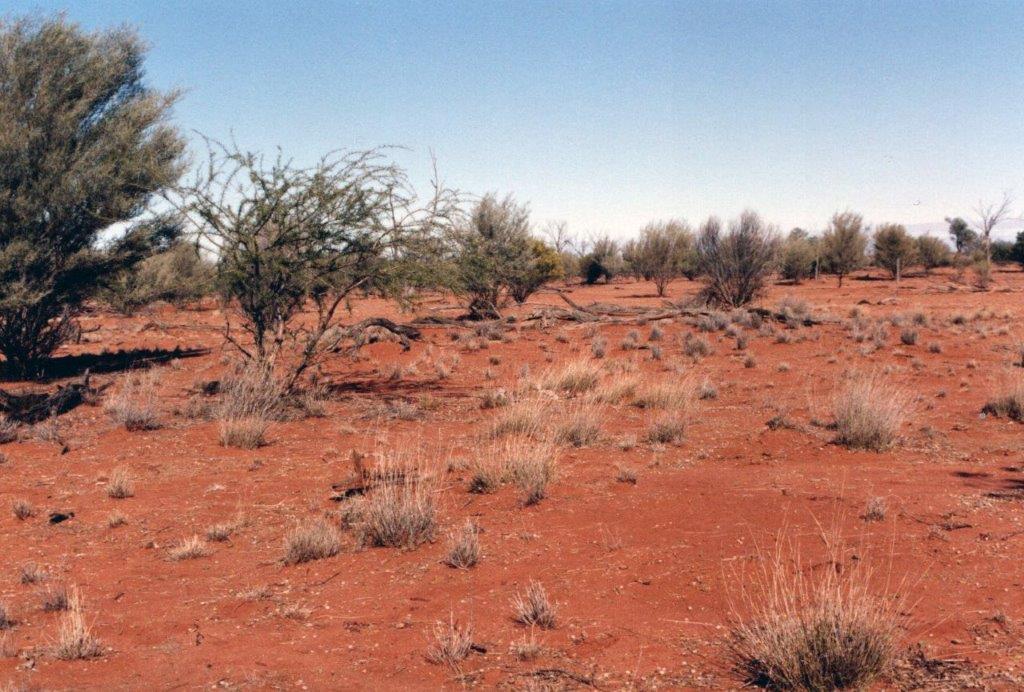 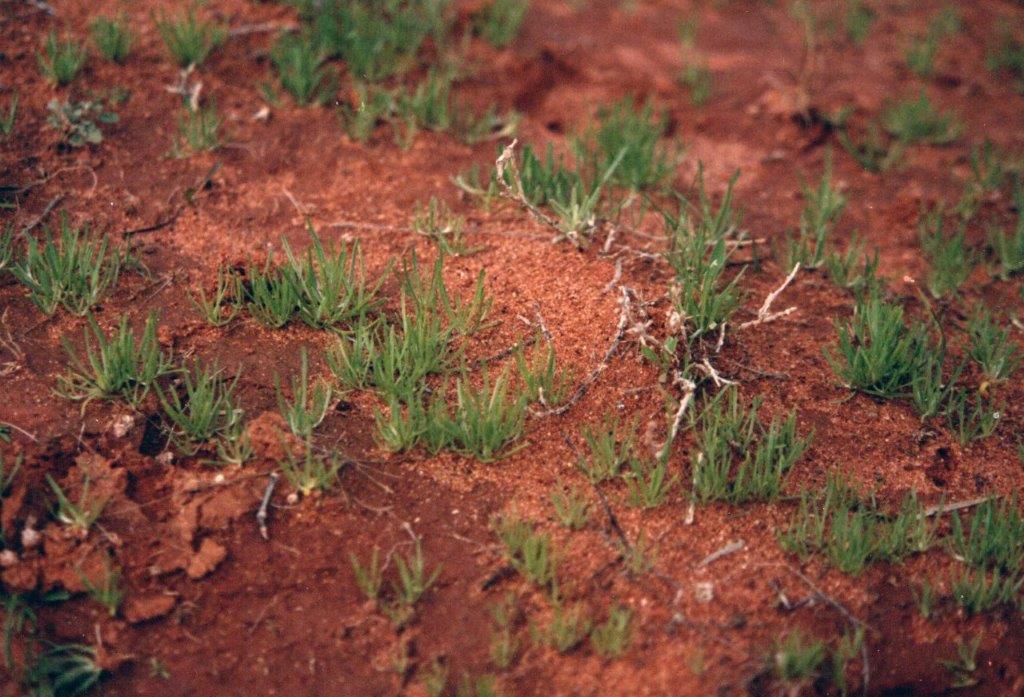 Another variety of small shrub.

Along Frome’s and Twelve Mile Creeks are flood plains of connecting channels near Lake Pinaroo.

Lake Pinaroo is around 80 Km north of Tibooburra and 24 Km south-east of Cameron Corner. It plays a crucial role in the survival of many plants and animal species, and supports large numbers of water birds and waders, including international migratory and threatened species.  When full, as we saw it, the Lake is a stunning contrast to the dry landscapes of Sturt National Park. 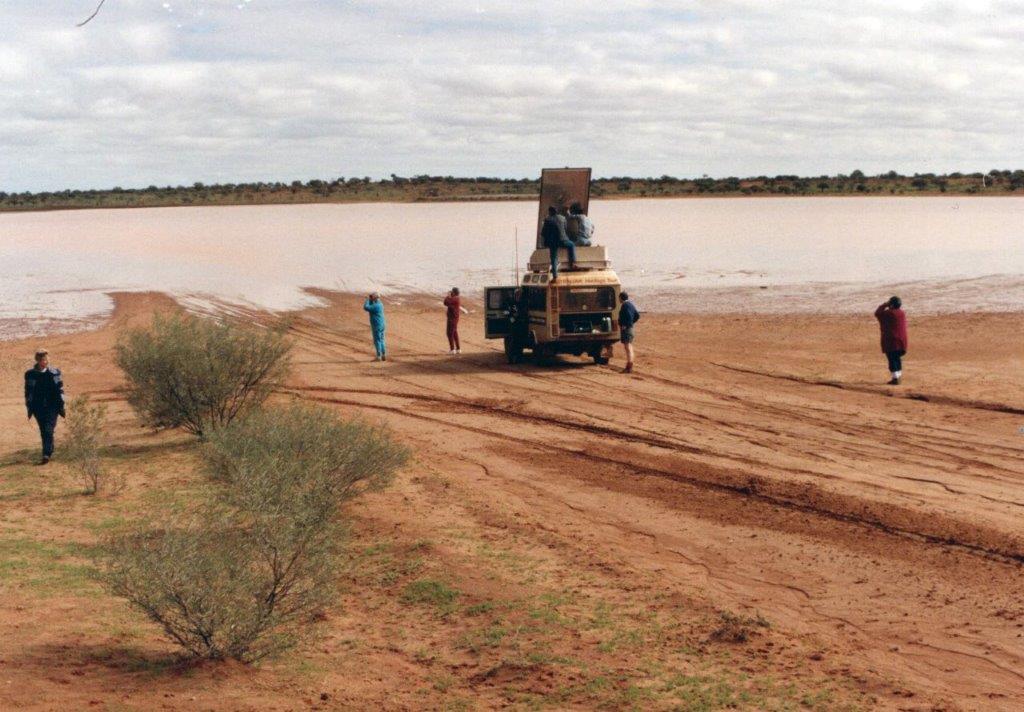 Wild life includes Emus - with males up to 2 m high – living in pairs or family groups and Red Kangaroos.  The Wedge Tail eagle, Australia’s largest bird of prey with a wing span of 2.5 m may be seen.  In season the most famous desert wildflower – Sturt’s Desert Pea – with  vibrant red leaf shaped flowers and black centres can’t be missed. It thrives in red sandy soil. 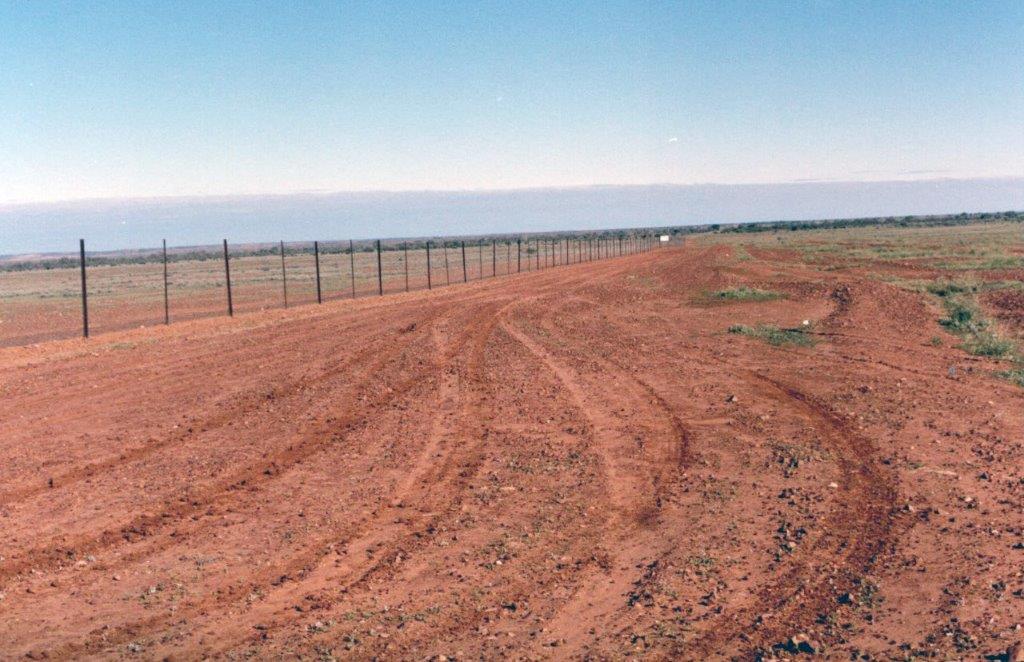 The area, in the unusual conditions of heavy rain in which we saw it, could not have been different from the extreme heat and dryness that faced Charles Sturt. 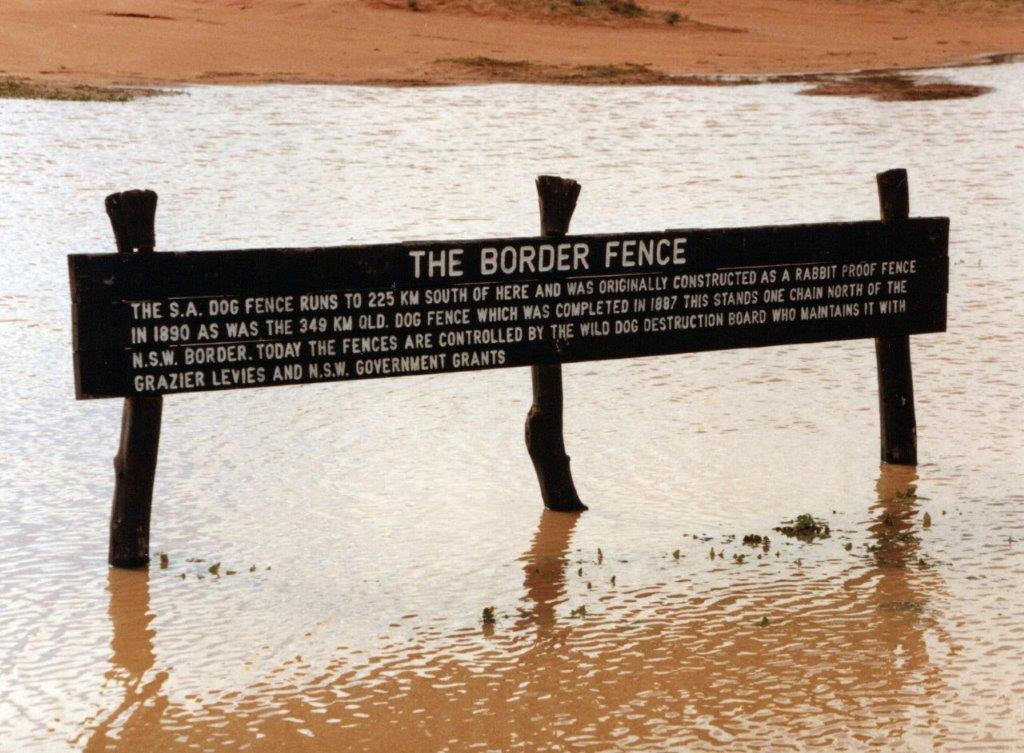 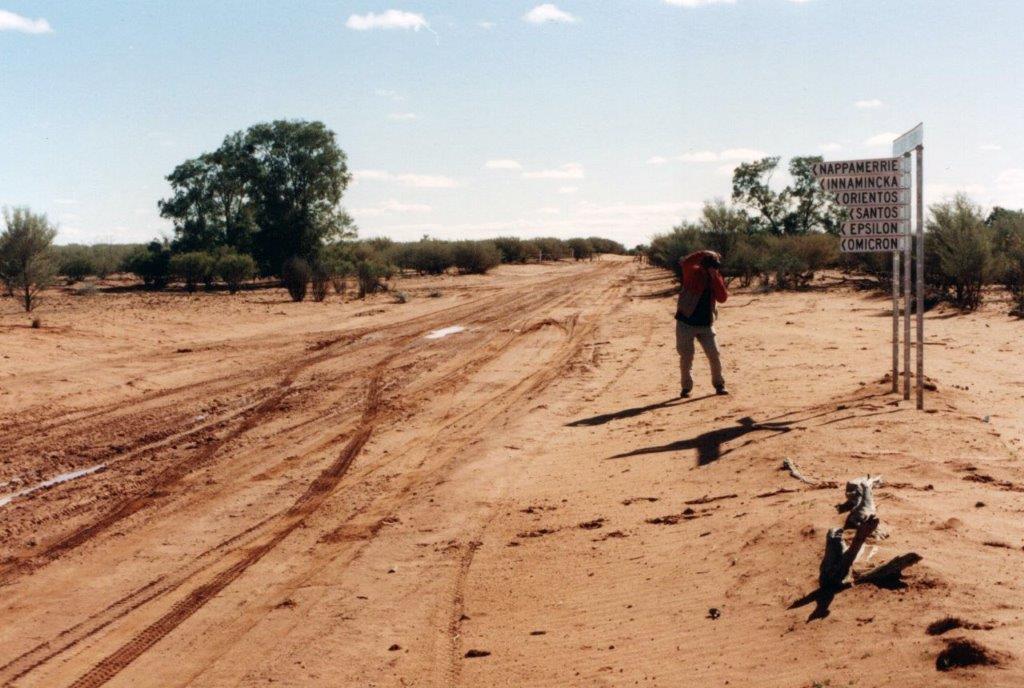 The road east toward Cooper Corner. 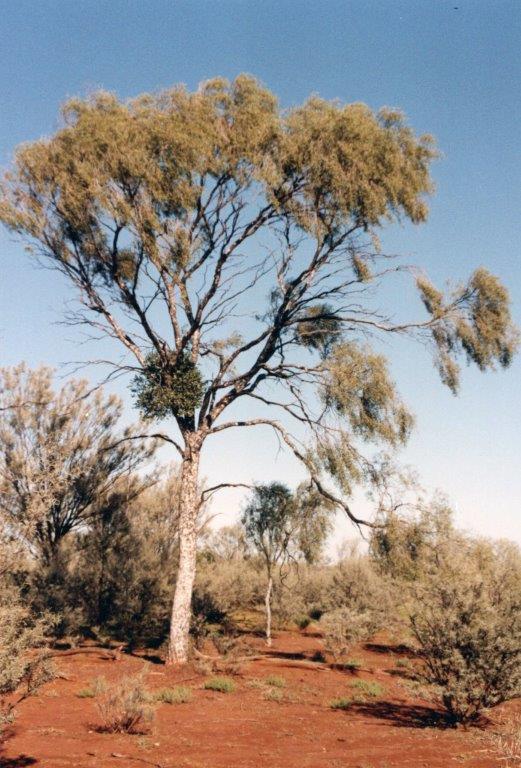 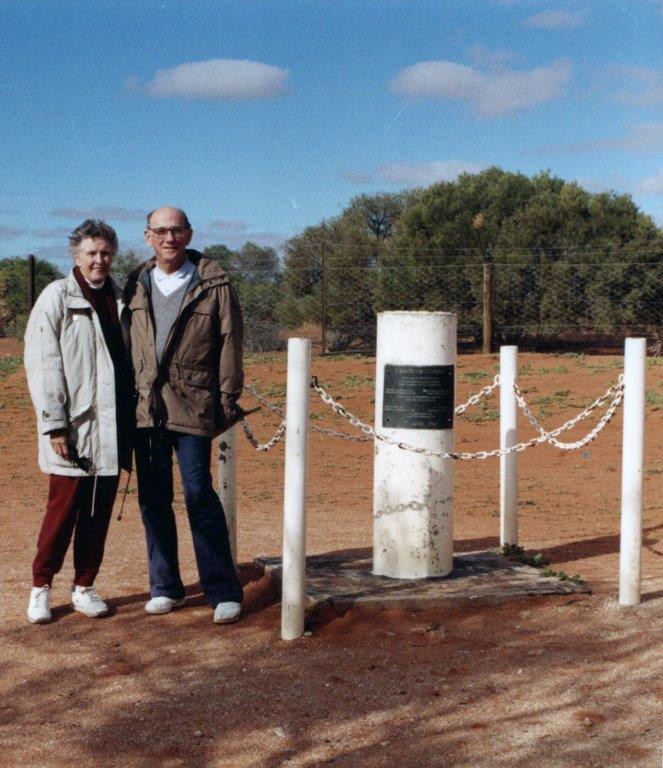 Beside the "Corner Peg" at Cameron Corner.

Photographs by George Repin in May 1990