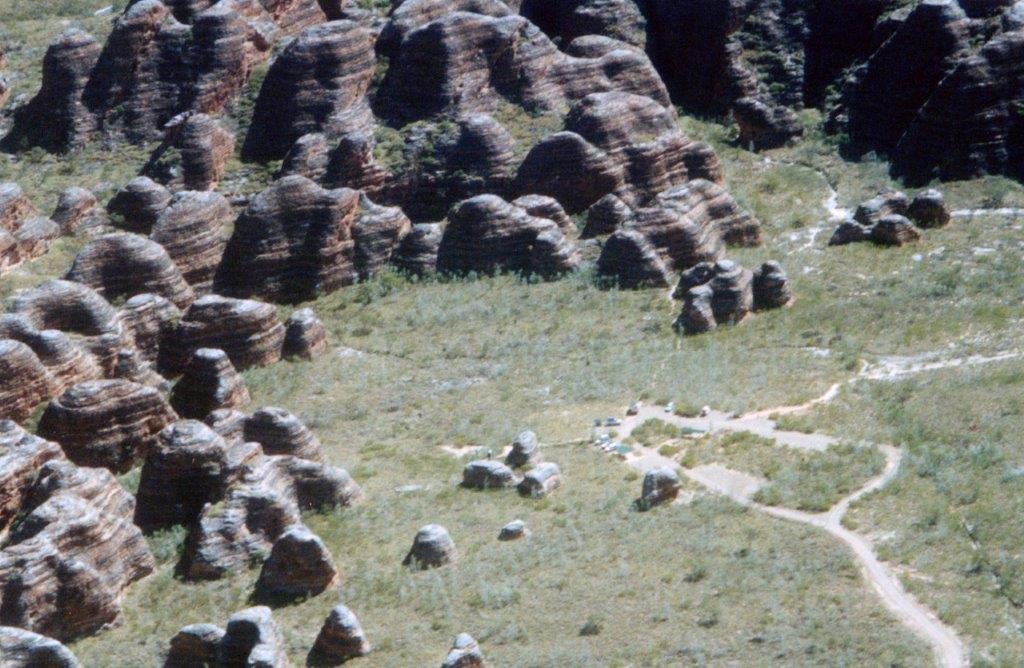 View of the Bungle Bungle formations from the air.

The Bungle Bungle Range, a landform with distinctive bee-hive shaped towers, makes up much of the Purnululu National Park in the Kimberley area of Western Australia – approximately 300 kilometres (190 mi) south of Kununurra.

Flight path from Kununurra to the Bungle Bungle Range.
Until 1982, when film-makers included the Bungle Bungle in a documentary they were making about the Kimberley, the range was largely unknown except to stockmen and to the local aborigines, who had been living in the area for over 20,000 years. At that time there was no mention of the Bungle Bungle Range in any directories or guides to Australian National Parks readily available, despite the formation occupying an area of approximately 450 square kilometres (174 sq mi.).
The area was gazetted as the Purnululu National Park in 1987 and declared an UNESCO World Heritage Site in 2003. It was gazetted on the Australian National Heritage List on 21 May, 2007.
The Bungle Bungle Range is one of the most extensive and impressive occurrences of sandstone tower (or cone) karst terrain in the world. It lies fully within the defined National Park area with elevations as high as 578 metres (1,896 ft) above sea level.
The following is a brief synthesis of Purnululu National Park as inscribed on the UNESCO World Heritage List:
… [is a] remote area managed as wilderness. It includes the Bungle Bungle Range, a spectacularly incised landscape of sculptured rocks which contains superlative examples of bee-hive shaped karst sandstone rising 250 metres above the surrounding semi-arid savannah grasslands. Unique depositional processes and weathering have
given these towers their spectacular black and orange banded appearance, formed by biological processes of cyanobacteria (single cell photosynthetic organisms) which serve to stabilise and protect the ancient sandstone formations. These outstanding examples of cone karst that have eroded over a period 20 million years are of great beauty and exceptional geological interest. 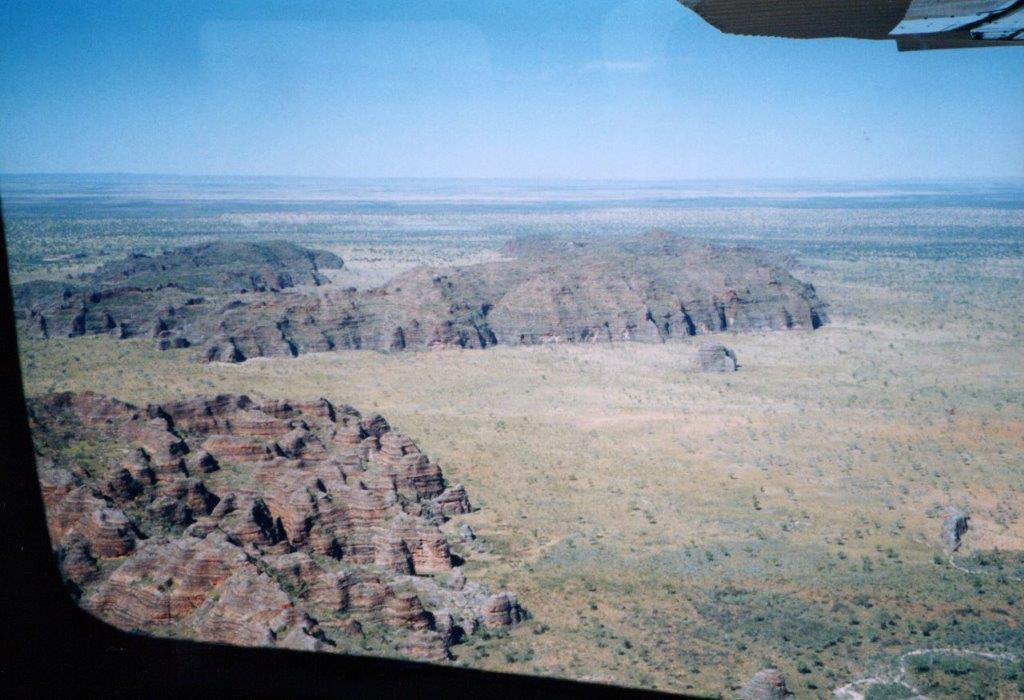 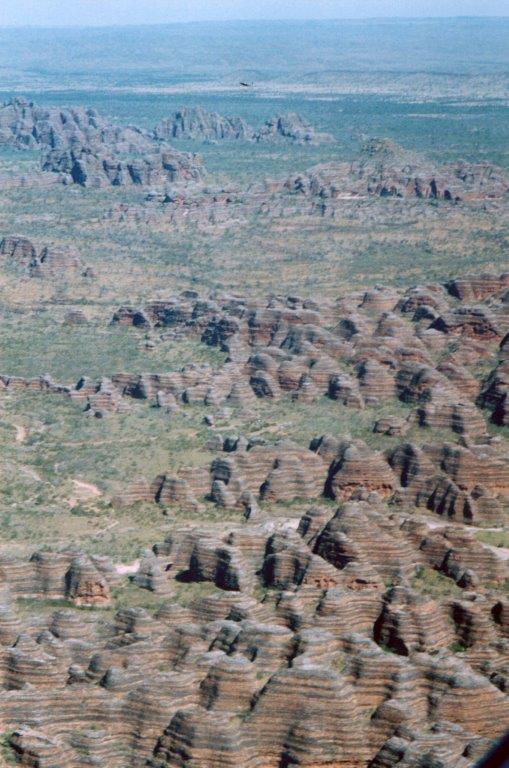 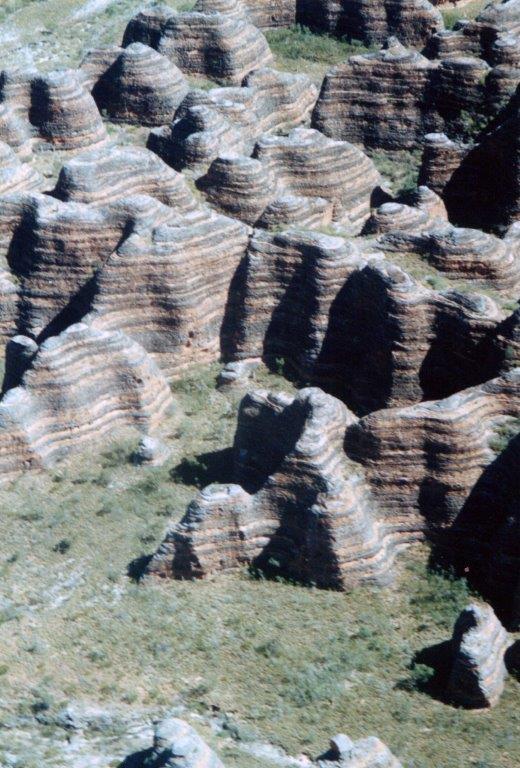 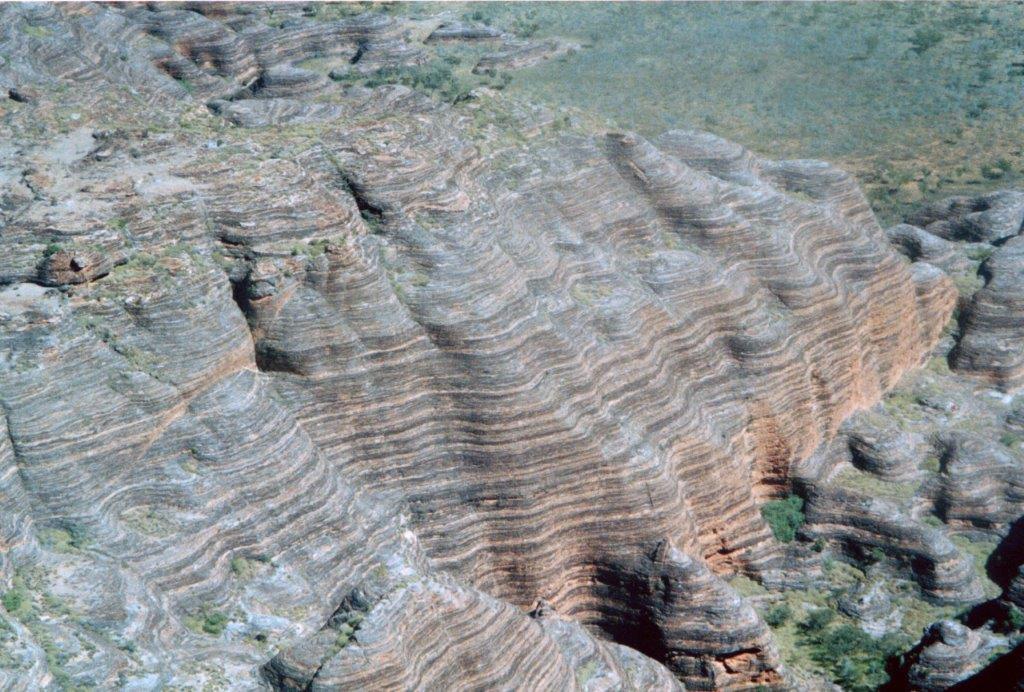 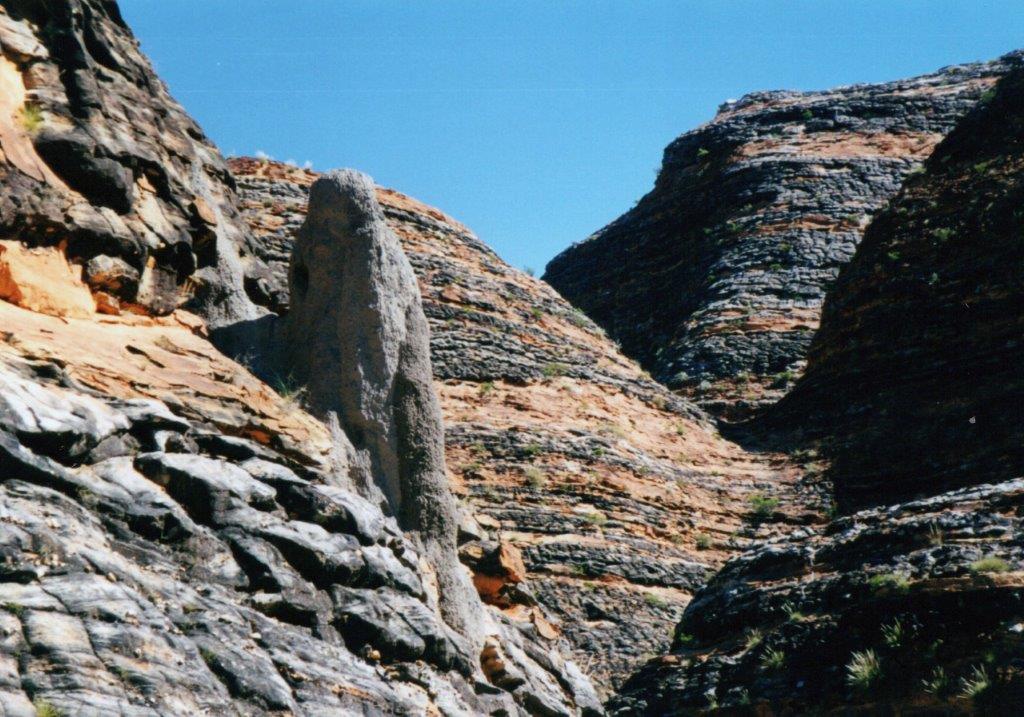 Close up view of the rock formations at ground level.
The Bungle Bungles were a plateau of Devonian sandstone, which was carved into a mass of bee-hive shaped towers. The plateau, now, is dissected by deep, sheer-sided gorges and slot canyons. One of these, the Cathedral gorge, is easily accessible by a path from the Bungle Bungle air-strip. 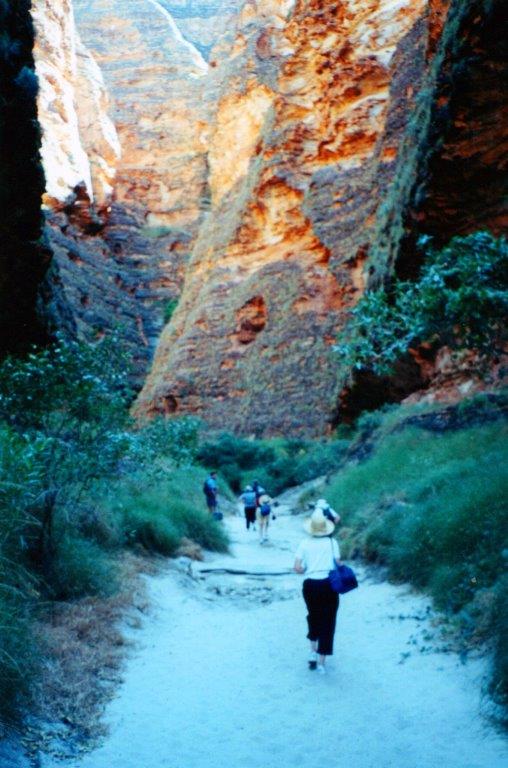 Walking in to the "Cathedral Gorge". 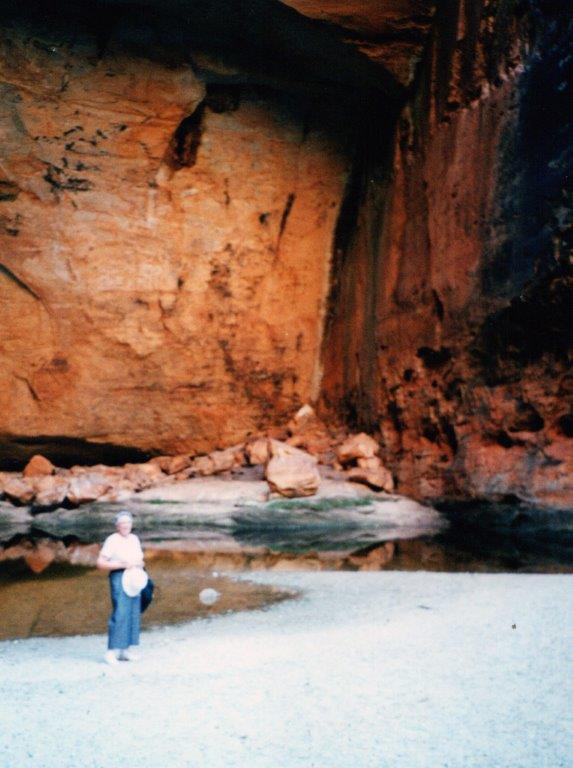 Inside the "Cathedral Gorge".
Purnululu National Park is accessible by road via the Spring Creek Track from the Great Northern Highway about 250 Kms south of Kununurra. The track is usable only in dry weather by four-wheel drive vehicles. Safely negotiating its 53 Kms length to the visitors centre takes about three hours.
Helicopter sightseeing flights are available and light aircraft flights from Kununurra or Lake Argyle, landing at the Bungle Bungle air-strip can be arranged. 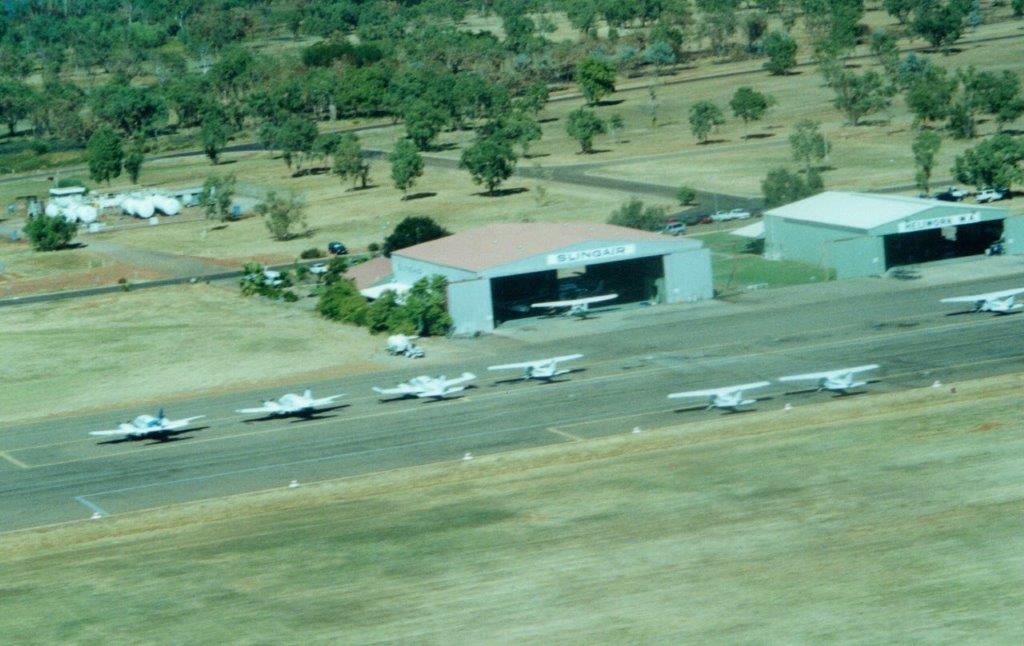 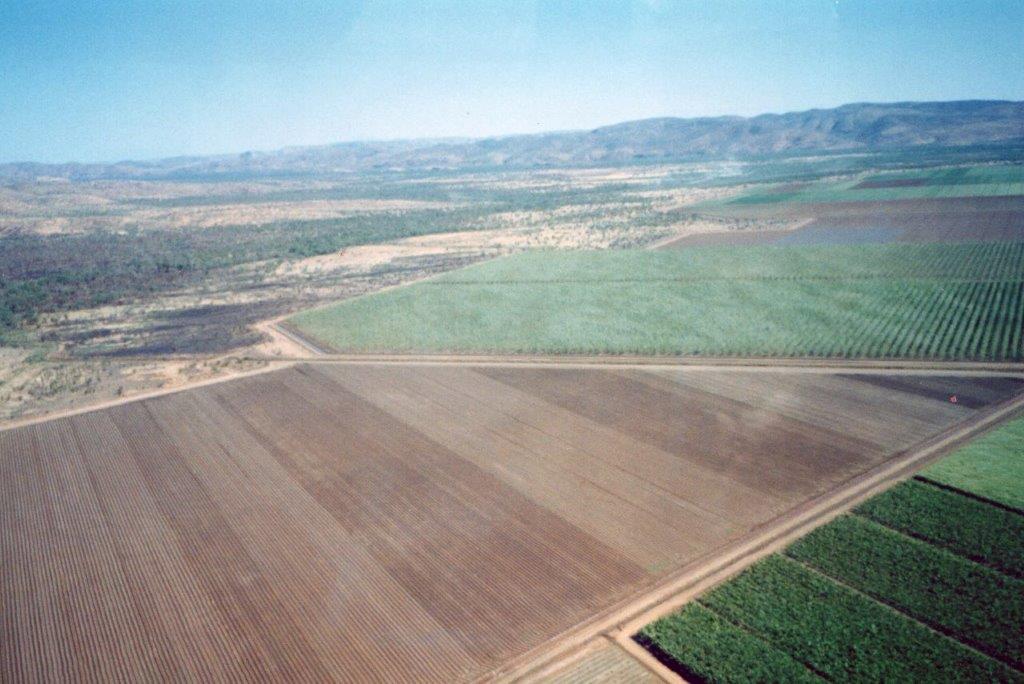 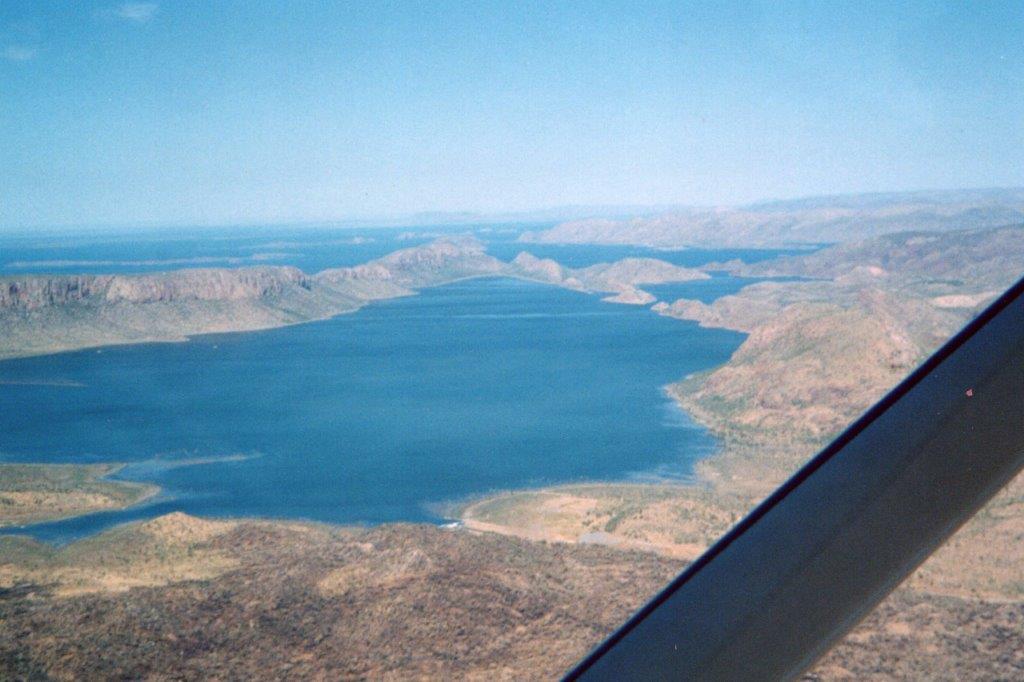 Aerial view of Lake Argyle.
Photographs by George Repin in 2002.