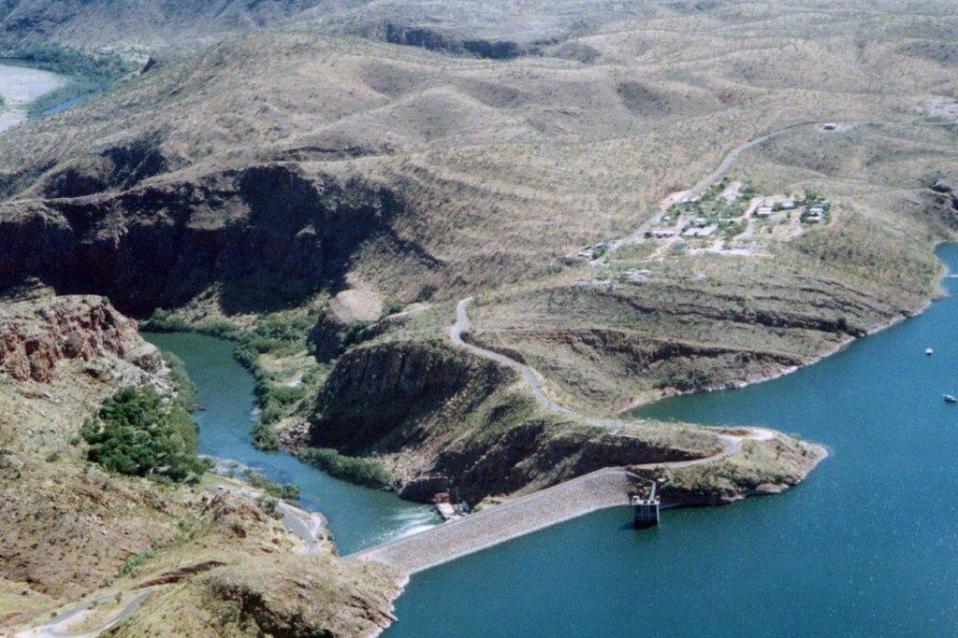 The Ord River in the Kimberley region of Western Australia is 320 kilometres long with a catchment covering 46,100 square kilometres.  The fertile plains of the lower reaches of the river attracted farmers and pastoralists to the East Kimberley. However, despite the very heavy rainfall in the “wet” season, in the dry “season” the Ord was reduced to a series of waterholes, so that the idea of establishing a significant agricultural industry in the area could not be realised without harnessing the waters of the river.  For over one hundred years the idea of damming the Ord had been discussed but the drought between 1935 and 1942, which had severely affected the Kimberley Pastoral Industry, highlighted that a dam could support the industry.
It was recognised that the only way to transform the semi-desert cattle country into a luscious, year round agricultural area would be by building a dam on the Ord River.  The 2500 gigilitres of water flowing into the ocean each day during the wet season storms would be captured.  It has been calculated that this quantity of water was enough to supply Perth for ten years.
Over several decades much preliminary work was undertaken, including experimental and research stations and extensive surveys, particularly of the proposed dam site.
Finally a grant from the Commonwealth Government in 1959 enabled the Western Australian Government to start work on the Ord River Irrigation Scheme (ORIS) – now known as the Ord River Irrigation Area (ORIA).
A first dam - the Ord River Diversion Dam – officially opened in July 1963 was built to hold back Lake Kununurra.  Construction of the Ord River (Main) Dam started in 1969 and was completed in 1971.  It was officially opened on 30 June, 1972.  The resulting reservoir was named Lake Argyle after the property it partly submerged – Argyle Downs.  It is Western Australia’s largest and Australia’s second largest freshwater man-made reservoir by volume.  The dam wall is 335 metres (1,099 ft) long and 98 metres (322 ft) high.  The earth-fill only dam wall is the most efficient dam in Australia in terms of the size of the dam wall to the quantity of water stored.   When completed the capacity was 5641 gigilitres (equivalent to 11.2 Sydney Harbours).  In the 1990’s after a decision to build a hydroelectric power station at the base of the Ord Main Dam a weir was built across the spillway to raise the storage of water by six metres.  As a result capacity was doubled to 10,763 gigilitres (equivalent to 21 Sydney Harbours). 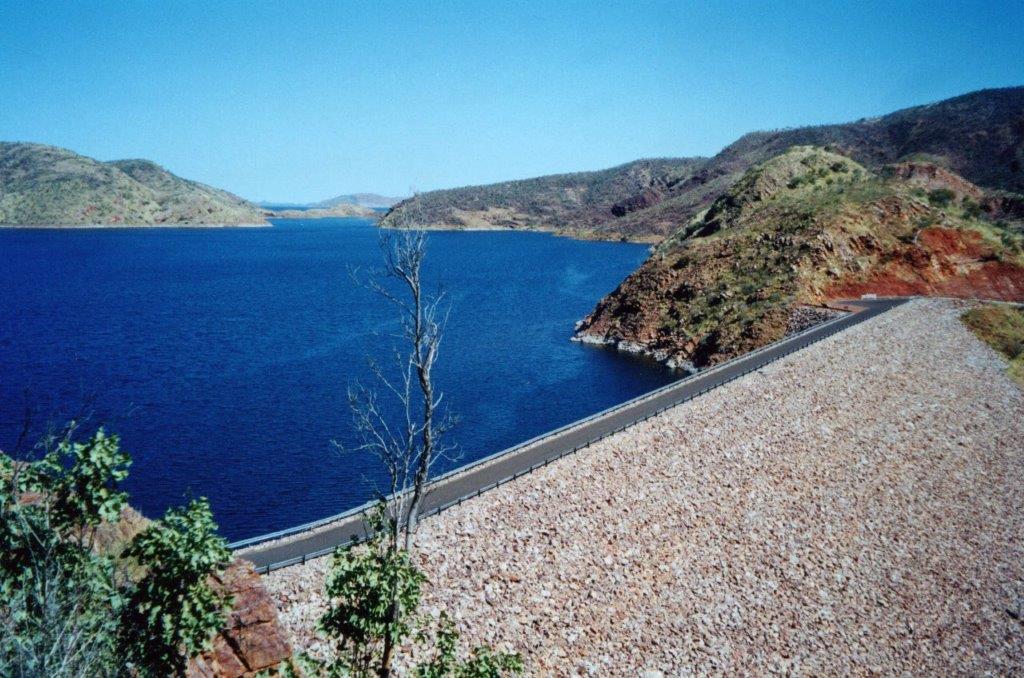 Visitors on a viewing platform.  Roadway across the dam visible in the bottom right hand corner. 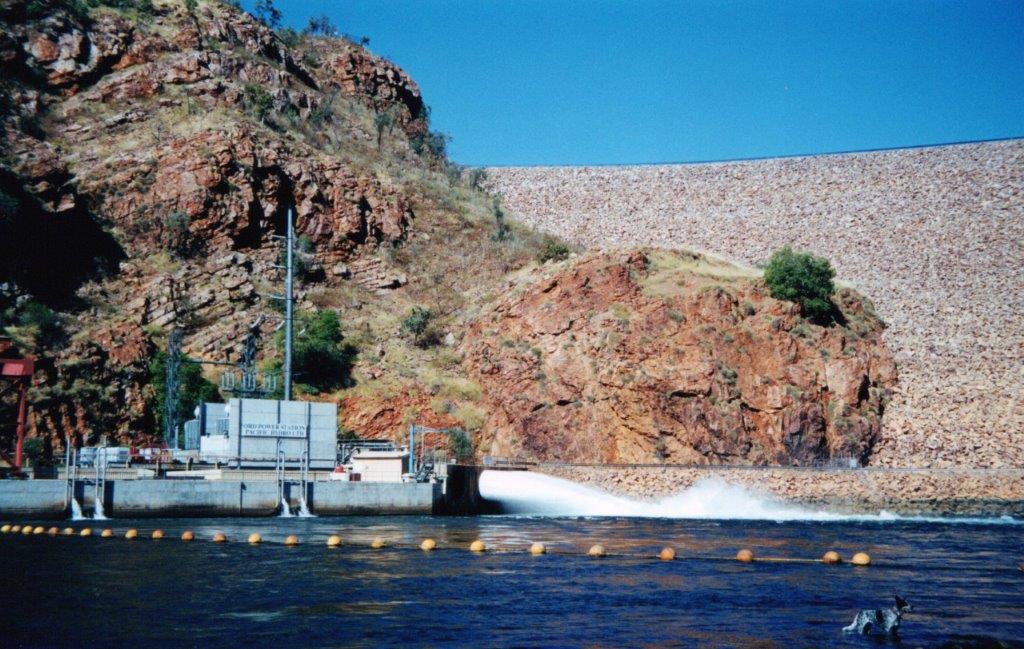 The power station at the base of the dam discharging  into the Ord River Gorge.
The damming of the Ord River has produced significant changes in the environment.  In Lake Argyle a thriving new eco-system has developed with 26 species of native fish and an estimated population of 25,000 freshwater crocodiles.  The lake, with its surrounding mudflats and grasslands, is a natural habitat of waterbirds in internationally significant numbers. 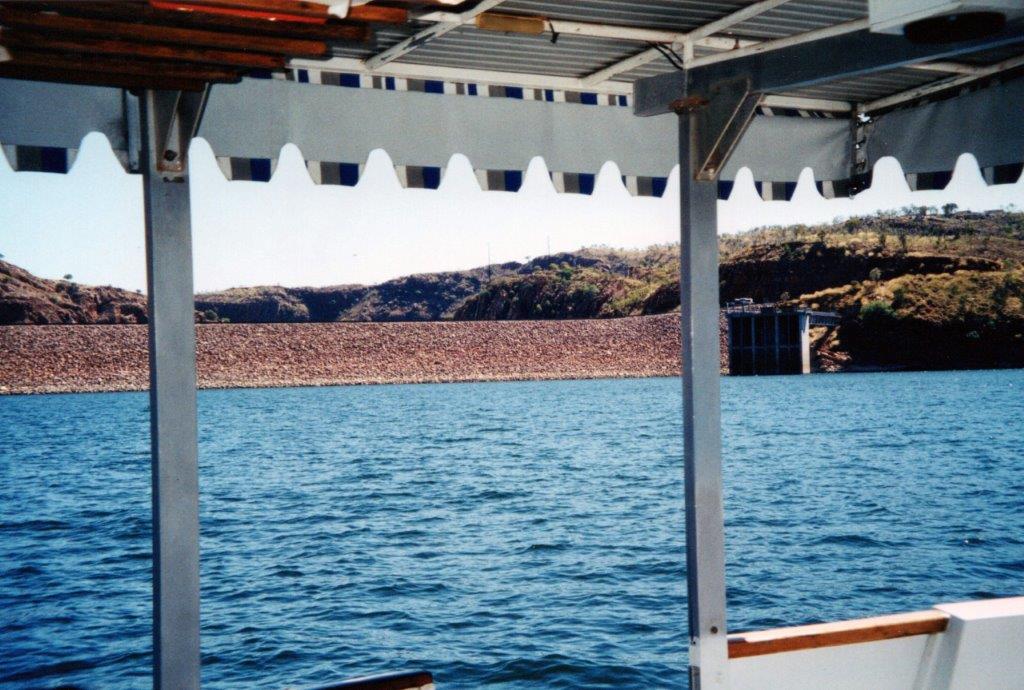 The dam seen from a tourist boat on Lake Argyle. 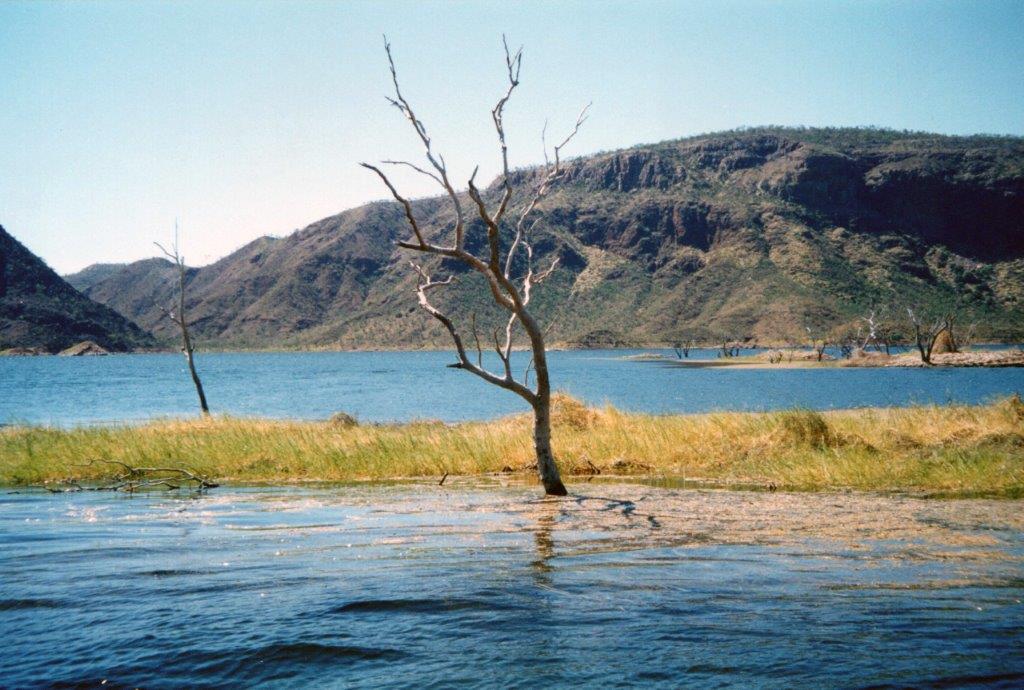 One of a number of islands in the lake.
Unfortunately cane toads reached the dam in late 2008.
Like so many other experiments in tropical agriculture the scheme initially failed:
However, the irrigated areas now successfully produce a variety of fruits and vegetables, while the largest commercial Indian Sandalwood plantations in the world are now in the ORIA. 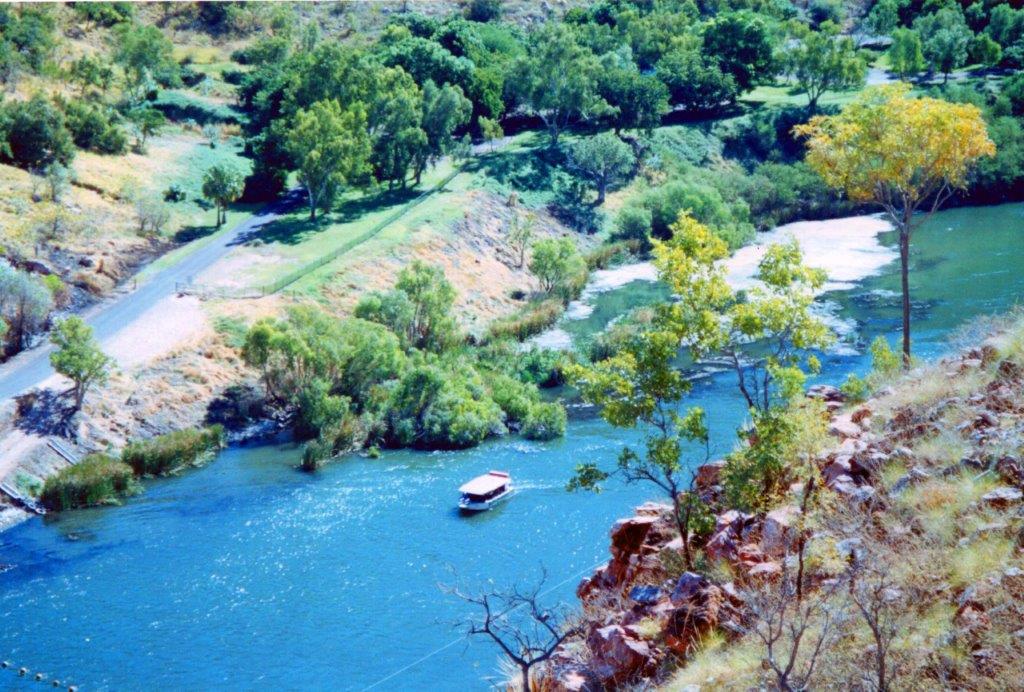 Looking down onto a tourist boat in the Ord River Gorge.
(Photographs by George Repin in 2002)