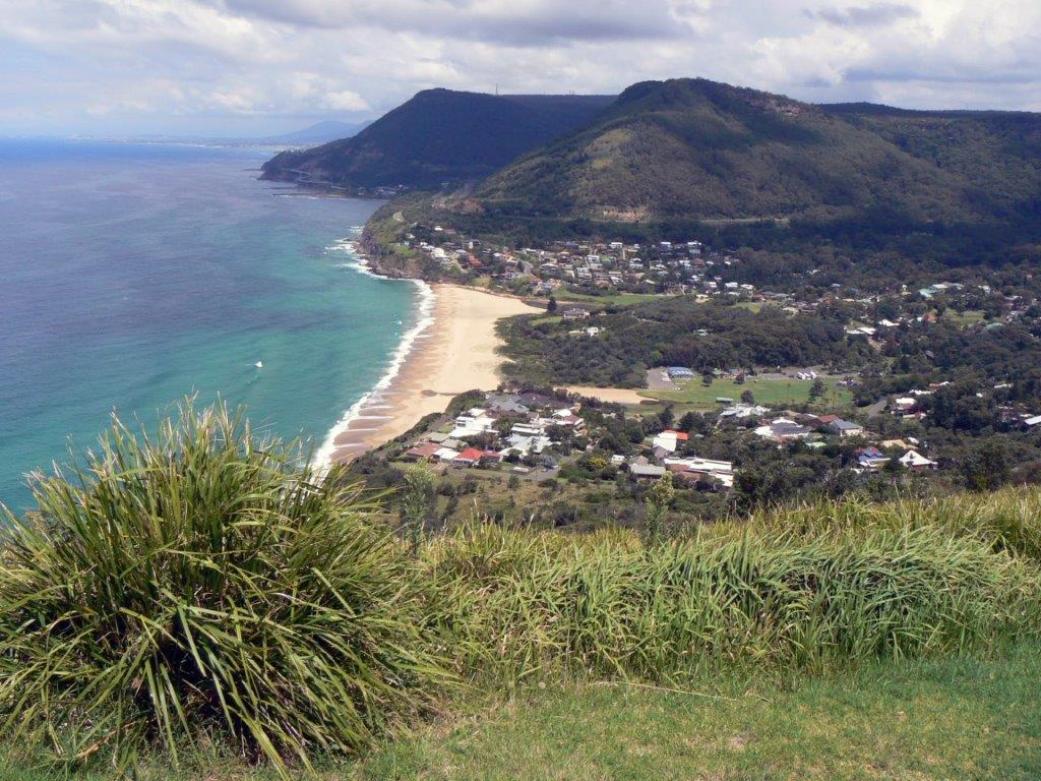 View down to Stanwell Park Beach.

By George Repin
Near a road stop on Bald Hill overlooking Stanwell Park, on the road emerging from the Royal National Park heading south down the N.S.W. coast, is a memorial to Lawrence Hargrave an Australian explorer, inventor and aeronautical pioneer. 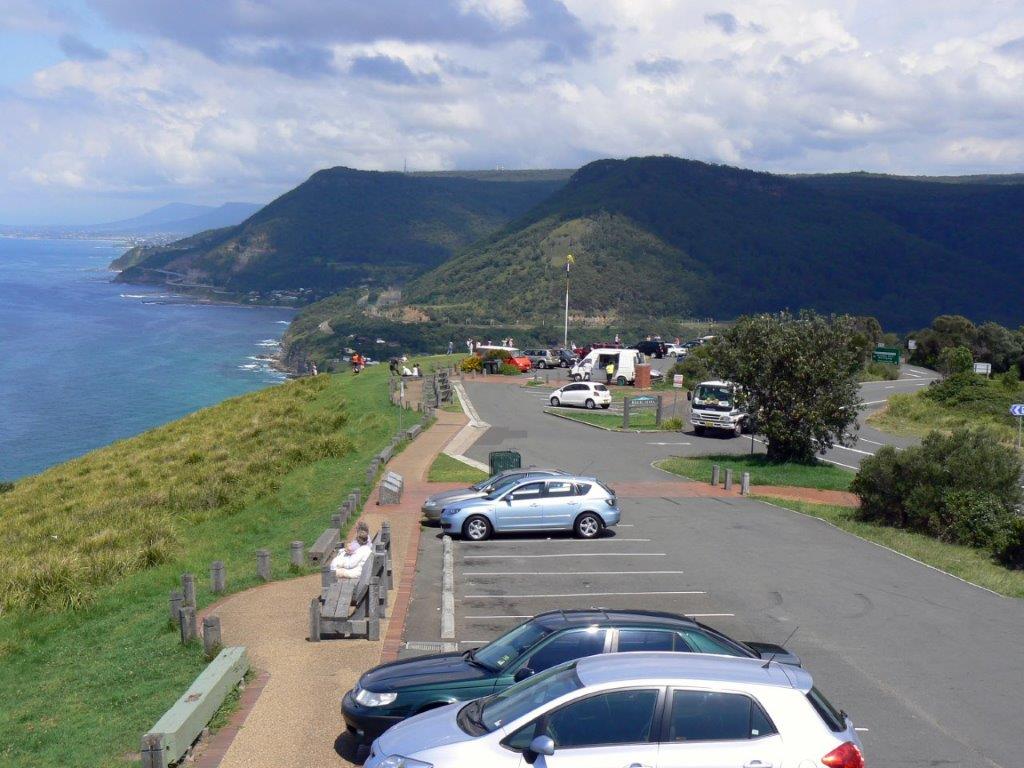 The parking area on Bald Hill overlooking Stanwell Park.
A detailed biography of Hargrave appears in Volume 9 (1983) of the Australian Dictionary of Biography.  Some highlights of his career after arriving in Australia in 1865 at the age of fifteen include:
Thanks to his father’s prudent investments in land Hargrave was able to give up paid employment before he was thirty and from 1883 devoted himself full-time to his inventions.
His observation of waves and the motions of fish, snakes and birds interested him in flight and, in a long paper presented to the Royal Society in 1884, he theorised that the way forward was to  ”follow in the footsteps of nature”.
He chose to live and carry out his experiments into flight at Stanwell Park, a place which offers excellent wind and hang conditions.  Today Stanwell Park is a recognised venue for hang gliding and paragliding.
Hargrave produced many inventions but never applied for a patent on any of them, being opposed to the concept of inventors keeping the results of their labours to themselves.
Three of his inventions were of particular significance:
Hargrave successfully lifted himself off the ground under a train of four    of his box-kites at Stanwell Park Beach on 12 November, 1894.  He rose 16 feet in a wind speed of 21 m.p.h.
Abbott Lawrence Rotch of the meteorological observatory at Harvard University, having read of Hargrave’s achievement in Engineering, built a kite which, after modification, was adopted by the weather bureau of the United States, and the use of box-kites for meteorological observations became widespread. The principle was applied to gliders and in October 1906 Alberto Santos-Dumont used the box-kite principle in his aeroplane to make his first flight.
Hargrave’s only son was killed at Gallipoli in May 1915.  Hargrave himself died in July of that year from peritonitis after an operation for appendicitis.
An engraving of Lawrence Hargrave, together with drawings of some of his gliders, appeared on the reverse of the Australian $20 banknote from 1966 to 1994.
Lawrence Hargrave has been commemorated in a number of ways: 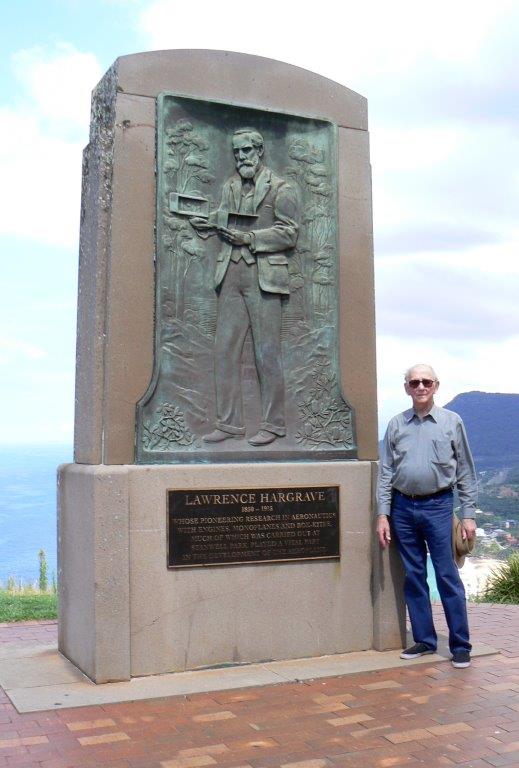 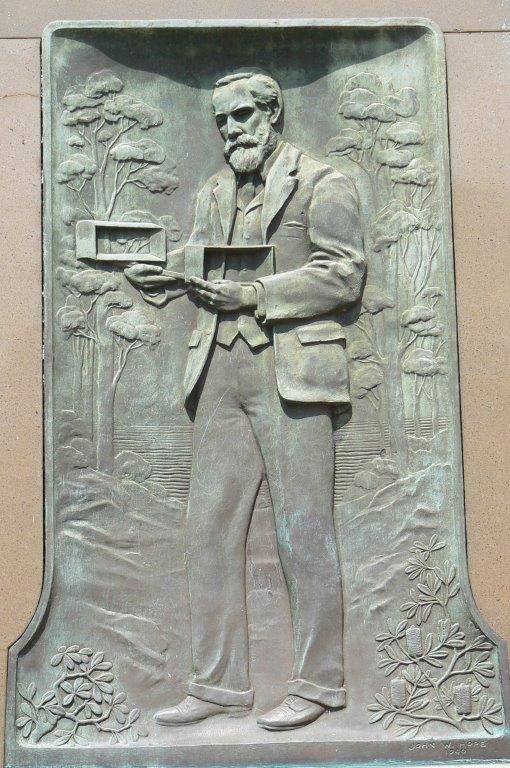 Close up image of Lawrence Hargrave.

Citation at the base of the Lawrence Hargrave memorial.

Reverse of the Australian $20 banknote from 1966 to 1994 which featured Lawrence Hargrave and some of his gliders.
Photographs by George Repin in March 2009.